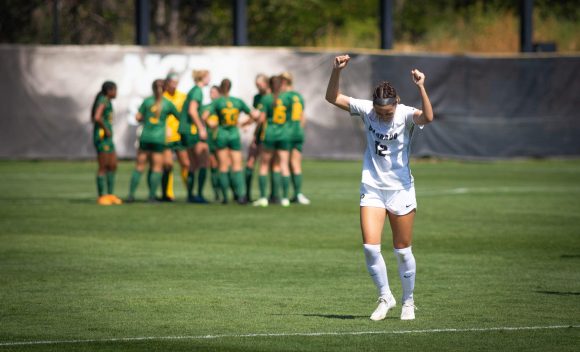 Freshman midfielder Roo Yarnell-Williams shows her excitement in between plays during the game against the Baylor Bears. Sept. 8, 2019 (Kevin Wu / CU Independent)

Since she was a child, Roo Yarnell-Williams’ life has been surrounded by sports. Yarnell-Williams, now the University of Colorado Boulder’s soccer freshman midfielder, is the youngest of five girls. Her sister, Makenna, played soccer for Northern Arizona and her other sister, Chelsea, was a diver at Pepperdine University. When asked to describe what it was like to grow up with four siblings, Yarnell-Williams used one word: “intense.”

Growing up in such a competitive environment helped Yarnell-Williams craft her fiery mindset — an outlook she carries with her on the field today. 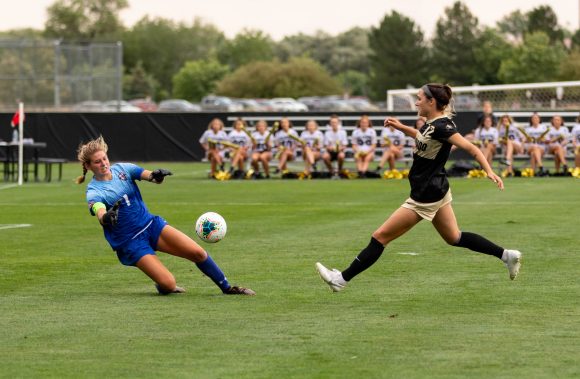 Freshman midfielder Roo Yarnell-Williams gets ready to score when the Austin Peay State goalie dives in for the ball, blocking her. Sept. 5, 2019 (Casey Paul / CU Independent)

“I’d play up with my sister’s soccer team when I was younger and I would not (want to) lose,” Yarnell-Williams said. “I’d get so mad. I’d stay after practice and just shoot the ball because I wasn’t playing, obviously, because I was two years younger than her. But just the mentality of never giving up and just doing your best at all times I think really prepared me for this.”

Before coming to Boulder, Yarnell-Williams played for the San Juan Soccer Club. While a member of the club team, Yarnell-Williams traveled to and played in tournaments in Sweden and Japan. The experience, she said, helped prepare her cognitively and presented her with a bit of adversity.

“The coach from San Luis Obispo, Cal Poly came and ended up being my head coach and there was a game where I didn’t start and that really got to me,” Yarnell-Williams said. “It was more mentally preparing me than physically preparing me. Definitely the mental aspect of it allowed me to be prepared for the many obstacles that I could face here (at CU).”

Before the 2019 season, CU’s women’s soccer team traveled to Steamboat. Senior midfielder Taylor Kornieck talked previously about how the team’s trip allowed the nine new freshmen to get to know the upperclassmen, and more specifically get comfortable being around CU’s senior leaders.

“That was definitely the point where we all ended up bonding together,” Yarnell-Williams said. “We were taking care of each other. Just constantly being together in the same environment …. You could be a senior or a freshman and you’d still want to hang out with each other, which is very special because I know a lot of the girls from my old club team that went to college have not had the same experience.” 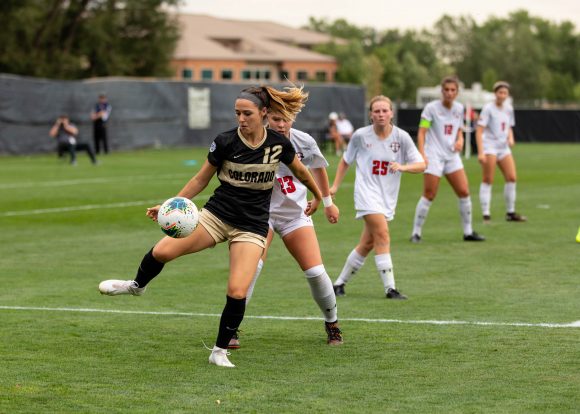 Freshman midfielder Roo Yarnell-Williams quickly gets in front of her opponent and gets the ball out of their reach. Sept. 5, 2019 (Casey Paul / CU Independent)

The trip, in Yarnell-Williams words, allowed the team to “connect and get to know each other on a much deeper level, rather than just the love for the game.”

These connections help Yarnell-Williams to perform on the field. During the fifth game of the Buffs’ season, Yarnell-Williams scored the second goal of her collegiate career in Colorado’s 2-0 victory over Austin Peay.

“I think Hannah (Sharts) was outside and it was a throw-in,” Yarnell-Williams said. “I remember just her lofting the ball and it bouncing off somebody’s head and I chested it down and right when I chested it down, I knew it was going to go right on my foot. So, I just flicked it in. I really just went through the process of saying (to myself) you can’t lean back, you can’t lean back, because I knew if that happened the ball would not be in the net and it would be flying over. So, I really just had to focus and take care of the ball.”

And Yarnell-Williams continues to keep her streak with her third season goal during CU’s historic win against Baylor Sunday. The experiences of those plays have helped Yarnell-Williams to grow and learn as an athlete, she said. Yarnell-Williams prioritizes being able to stay calm and concentrated during these high-intensity moments on the field.

“You see the ball coming and you see the goal in front of you and, before, I would kind of panic a little bit, even in club,” Yarnell-Williams said. “But here, you don’t have time to panic. You really do have to just take everything in and take that big breath, which kind of helps clear your mind and slow the game down.” 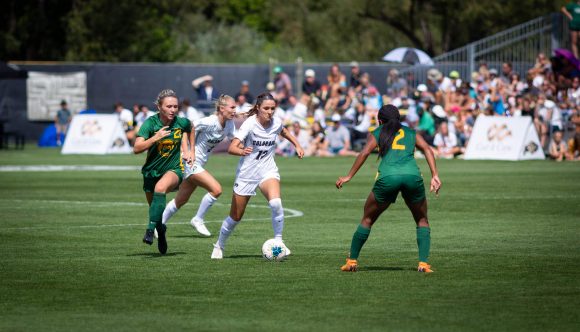 However, through the Buffs’ first six games of the season, if Yarnell-Williams has learned one thing it is to “play fast.”

“Coming in, I wasn’t expecting this high of tempo (in) the game,” Yarnell-Williams said. “Adjusting to the speed of play, that’s something that everybody should be prepared for because it’s so much different than club soccer. You really have to just keep your head in the game.”