CU’s Takács Quartet gears up for two evenings of Mozart, Bartók and Dvořák 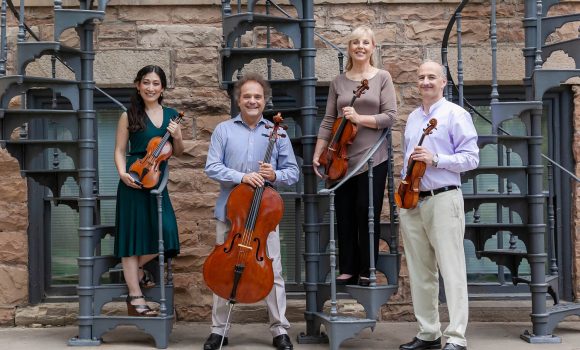 The Boulder-based Grammy award-winning string quartet comprises of two violinists, a violist and a cellist. The quartet is in residence at CU’s School of Music. Founded in 1975 in Hungary, the group has gained significant recognition since winning the first prize at the International String Quartet Competition in 1977. They became the first string quartet to win the Wigmore Medal in 2014.

Mozart’s String Quartet No. 19 is a romantic-style piece composed between 1782 and 1785 that was inspired by fellow composer Joseph Haydn. The composition has several characters, going from a dark and gloomy tone to a lighter, more cheerful tone.

Bartók’s String Quartet No. 4, however, is a much more dissonant and contemporary piece, haunting in its nearly mathematical approach to music. Published in 1928, this piece has since become one of Bartók’s most famous compositions. Bartók scholar Halsey Stevens described it as, “Bartók’s greatest and most profound achievement.”

The final piece will be Dvořák’s String Quartet No. 12, nicknamed the American Quartet. Dvořák describes it as“very melodious and straightforward.” The piece was composed by Dvořák in 1893 after a twelve-year break from string quartets. Dvořák’s inspiration for the composition came from a summer-long stay in the small Czech community of Spillville, Iowa, where he began writing this piece three days after his arrival. He finished it in a mere fortnight, after which he thanked God for his inspiration.

More information on the Tákacs Quartet’s concert can be found here.