Kornieck prepares for Buffs’ soccer matchup with No. 24 Texas 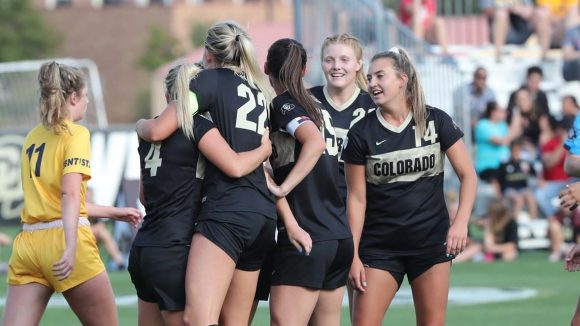 Taylor Kornieck (No. 22) celebrates with her teammates after taking the lead against Kent State. (Photo by Tony Harmon, courtesy of cubuffs.com)

Senior midfielder Taylor Kornieck will undoubtedly go down as one of the best players in University of Colorado women’s soccer history. As Kornieck continues to climb the Colorado soccer all-time points list, she has one goal in mind: to finish at the top.

“All four of my years here I just wanted to play at my best, and literally I just look at the points (list) all the time,” Kornieck said. “I’m in third place right now (in all-time points at CU), and I just really want to be number one. I think it’s just really important to me, I’m really competitive like that.”

In her final season with the Buffaloes, Kornieck hopes to lead Colorado back to the NCAA Tournament after narrowly missing the cut in 2018. CU boasts an impressive combination of upperclassmen leadership and overall depth with nine freshmen and two transfers available for the 2019 season. This depth should help the Buffs avoid losing multiple games in a row, despite facing a tough schedule both in and out of conference play.

“I think it’s important that we all include the freshman and the transfers,” Kornieck said.  “We’ve done a really good job of integrating them with our team.”

After talking briefly about her individual success at Colorado, Kornieck was quick to mention that the most important thing in her senior season is to win games.

“I think team success is number one. (It’s) important to me,” Kornieck said. “Whatever happens with me, I just hope the team gets far and we end up being the best Colorado’s ever seen.”

While talking about her development as a player, Kornieck said head coach Danny Sanchez had a tremendous impact on her individual growth.

“I’ve definitely grown a lot as a player,” Kornieck said. “I think Danny really challenged me and now I’m a leader. It’s my final year, I’m a senior now so being captain really (has) helped me grow.”

According to Kornieck, Sanchez has emphasized giving the maximum amount of effort possible throughout the game and getting off to fast starts, something that CU struggled with last Thursday against when playing the Kent State Golden Flashes.

“I think we just all came out really slow in that game,” Kornieck said. “We flipped a switch in the second half for sure.”

Kent State came out aggressive during Thursday’s match and was able to maintain possession in the attacking half for a good chunk of the game’s first half. The Golden Flashes found the back of the net in the 21st minute when redshirt sophomore Karly Hellstrom blasted a ball into the upper left corner of the net, past senior goalkeeper Jalen Tompkins. The Buffs responded in the 36th minute when sophomore defender Hannah Sharts served up a corner kick which Kornieck met with a centering header. The ball then ricocheted off freshman forward Tessa Barton and was headed in right at the goal line by sophomore midfielder Kayleigh Webb to even the game.

The Buffs had 13 shots in the second half compared to only six in the first. The aggressive play earned Kornieck a penalty kick in the 68th minute, which she put past the Kent State keeper to give Colorado the lead and ultimately the 2-1 victory.

“Whatever happens with me, I just hope the team gets far and we end up being the best Colorado’s ever seen.”

Kornieck was happy with how the team responded in the second half to earn the comeback win.

The Buffs will face The University of Texas at Austin on Sunday. The Longhorns, ranked at 24, are the highest-ranked team Colorado has faced this season. Kornieck talked about last year’s loss to the Longhorns and how the depth on this team should give Colorado a great chance to avenge the defeat.

“Last season we lost 3-0 to them, but I think we’re coming out with a different mentality,” Kornieck said. “We have a lot of players that can really help us, especially with the freshman. I know Roo (Yarnell-Williams) has been doing really well up top. We’re just a different team this year.”

While the Buffs have a long road ahead facing multiple former NCAA Tournament teams, Kornieck said it is important to focus on one task at a time.

“We have the same mindset going into every game, basically just play as hard as you can and take one game at a time … now all we’re focusing on is Texas.”