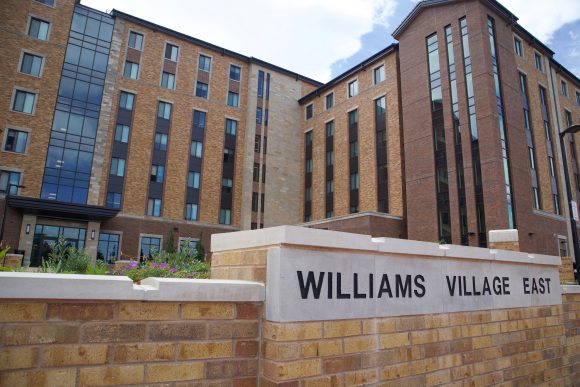 There is a new sight to see over at Williams Village. The University of Colorado Boulder hosted Will Vill Welcome this Wednesday to introduce residents to its improved facilities – namely Williams Village East, a new residence hall housing 705 students.

The new hall, which at 178,000 square feet cost $96.7 million to build, is complete with gender-inclusive bathrooms and features for students interested in gaming.

The building came after data collected by the university in September 2018 found that students living in Will Vill experienced lower average four-year graduation and retention rates than their peers living in residence halls on central campus. Will Vill is an extension of CU Boulder located several blocks from the main campus. It includes four residence halls, a village center equipped with a cafeteria and venue space, as well as a gym.

The lower retention rates have been attributed to the distance between Williams Village and the rest of the campus.  Residents were prone to “skipping classes because they don’t want to take the bus,” according to Lucy Hall, a community center lead for Williams Village East.

“I think the biggest problem is kind of feeling isolated – feeling like they’re not really a part of campus,” Hall said.

“Riding the bus is kind of a pain,” said Bridgette Schwab, a resident assistant for Stearns West. “You have to leave so much earlier for classes.”

According to Hall, there are plans to potentially place a bus stop closer to the new hall in order to mitigate the issue. Still, residents’ feelings of separation from their peers were enough to make some leave.

“Three people that I was friends with on my floor freshman year transferred to different colleges,” Schwab said.

But some freshman also find solace in being able to “come home” after attending classes, according to Schwab. Freshman and Will Vill East resident Katherine Lockridge described Will Vill as “calmer” than the main campus which can be “a little more hectic.”

“Sometimes it can be super overwhelming to live in the same place where you go to school,” Lockridge said.

“I think the biggest problem is kind of feeling isolated – feeling like they’re not really a part of campus.”

Will Vill East is setting itself apart from other residence halls in several ways, including gender-inclusive bathrooms, which Hall described as individual “pods.”

“Each pod is equipped with a urinal, a toilet, a sink (and) a shower,” Hall said. “Not only is it more gender-inclusive, but it also gives (residents) a lot of privacy.”

The new dorm is also relying on students who have an interest in gaming in order to bring appeal to their hall. The building’s lobby houses three large TVs complete with a Nintendo Switch, a PlayStation and XBox, as well as PCs for gaming, according to Hall.

“I think (the gaming feature is) a great way to build community and meet their fellow residents,” Hall said. “I’ve had a lot of freshmen come up to the building and be like, ‘can I live here?’ It’s really exciting that people are excited to be in Will Vill.”