Aaknes leads Buffs to a 2-0 win over Boston 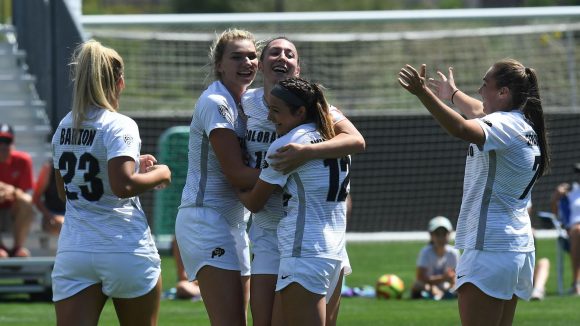 Kelsey Aaknes (middle) celebrates a goal against Boston with her teammates. (Photo courtesy of cubuffs.com)

The University of Colorado women’s soccer team came away with a 2-0 win over the Boston Terriers Sunday at Prentup Field. The Buffs looked to continue their momentum after a 2-0 shutout win over Drake on Thursday. The Buffs are set to face four more 2018 NCAA tournament teams, with Boston being the first. Senior defender Kelsey Aaknes led the charge for the Buffs, securing a goal shortly after the 22-minute mark.

“One of my goals this year was to try and be a force up top, attack as best as I could,” Aaknes said. “That’s the first goal I’ve scored in the fall season and so it meant a lot to me.”

Aaknes remained a strong force in the game’s second half after making a run up the left side of the field and allowing freshman midfielder Roo Yarnell-Williams to make her first career goal.

“(It was) an amazing feeling,” Yarnell-Williams said. “The excitement out of it, not just from me, but from my whole team and everybody crashing in, there’s no other feeling like it.”

The game’s first 20 minutes were somewhat quiet for both teams, with the Buffs being able to keep the ball in the Terriers zone. Junior defender Gabbi Chapa made a run down the right sideline just past the 10-minute mark, though her cross was knocked away by a Boston defender. The Terriers responded shortly after with a chance of their own that ended in an offside. Similar to the game against Drake, senior forward Stephanie Zuniga and senior midfielder Taylor Kornieck found success on offense early. Zuniga earned a free-kick at the 15-minute mark and soon after Kornieck sent a header over the crossbar.

Aaknes goal came after she received a solid outlet pass from sophomore forward Libby Geraghty and hurled the ball in the back-left corner of the net. As the first half of the game came to an end, the Buffs made a number of plays with midfielder Kayleigh Webb missing a shot wide at the 29-minute mark. Boston responded when sophomore forward Caitlyn Disarcina had a shot that missed over the right corner of the crossbar.

Aaknes attempted a shot that was saved by the Terriers marking the end of the first half. The Buffs led Boston in shots 10-3 at the halftime whistle. By the game’s 48-minute mark, the Buffs led Boston 2-0 after midfielder Yarnell-Williams tag-teamed a goal with Aaknes.

Colorado continued to dominate time of possession with multiple stints of sustained pressure in the offensive zone. The Terriers responded with a deep run into the CU zone, but redshirt sophomore defender Hannah Cardenas forced a corner kick.

Freshman forward Kyla Ferry received a pass and sent a shot just over to crossbar at the 69-minute mark. The Buffs continued to pour on the offensive pressure late when Kornieck had an excellent chance from close, saved by the Boston keeper. The Terriers made one last attempt to score, earning a corner that cumulated in a header over the crossbar. Colorado moved to 2-0 in non-conference play with a 2-0 shutout victory.

For Aaknes, success was due to Colorado’s aggressive defense and defensive depth which made possession for Boston a challenge and allowed for players to play multiple positions.

“It’s easier to destroy than to create,” said head coach Danny Sanchez said, echoing Aaknes. “So it’s easier to defend than to attack to a certain extent. The attack always takes a little bit of time (to develop).”

Aaknes, who aided in Yarnell-Williams pivotal second goal for the Buffs, said she was “really glad” that the freshman player got a “nice goal.”

“It was pretty much all her, all I did was pass it to her,” Aaknes said.

ADAM IS A JUNIOR AT UNIVERSITY OF COLORADO STUDYING STRATEGIC COMMUNICATION. HE IS ASSISTANT SPORTS EDITOR AT THE CU INDEPENDENT. ADAM ENJOYS SKIING AND GRAPHIC DESIGN IN HIS FREE TIME.