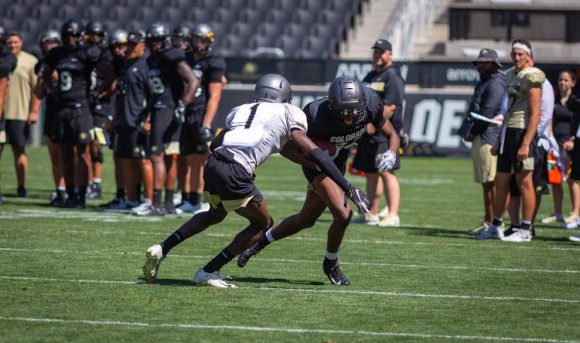 The University of Colorado’s head football coach Mel Tucker knows how important it is to have a solid secondary. Despite the Buffaloes’ apparent lack of experience at the defensive back position, Tucker is confident in the leadership ability of his upperclassmen cornerbacks.

“He’s like an old guy around here, even though he’s a youngster in my mind,” Tucker said. “He understands what it’s all about, he helps the younger guys, you’re able to coach him hard. If you can coach your best players hard and they respond, it makes it easier to coach the younger players.”

Tucker went on to speak about Abrams Jr. as well as junior cornerback Mekhi Blackmon, calling the duo a pleasure to coach as they improve their abilities.

“Mekhi is starting to follow (Abrams Jr.’s) lead,” Tucker said. “Those are two really fun players to coach, they seem to enjoy getting coached and are starting to apply what we tell them, and that’s why they’re getting better.”

Tucker and the Buffs will need Abrams Jr. and Blackmon, as well as sophomore cornerback Chris Miller, to step up and lead this relatively inexperienced group.

“A big part of being a leader is being coachable as a leader,” Tucker said. “That makes it easier to coach the rest of the guys.”

The senior cornerback is excited to have Miller back after Miller missed spring ball due to shoulder surgery.

“It feels good to have him back out there competing,” Abrams Jr. said. “(He’s) one of my bros. I know he gives it his all on the field, so I’m just trying to help him be the best, and he’s trying to help me be the best.”

Regarded by many players as the most athletic defensive back on the roster, Miller will bring valuable performance to the team.

“It’s just good to be back out there actually playing football,” Miller said. “It’s been a while, I’m just happy for that.”

When asked about how the younger defensive backs are coming along, Miller said everyone is focused on honing their skillset and daily improvement.

“We are all learning every day and trying to really get better and work on our craft,” Miller said. “(Coach Tucker) came in with a new system, we’re just learning off what he’s teaching us, and we’re just trying to get better.”

Despite their tight-knit relationship on the field, Miller and Abrams Jr. have contrasting leadership styles, with Abrams Jr., being described by Tucker as “humble and hardworking.”

Meanwhile, Miller admits he’s more of a hands-on, vocal player, but also prides himself with his on-field play and work ethic.

“I feel like I probably (do) both,” Miller said. “If the younger guys need to do something that I see, if they need to take notes, I’ll help them out. I’ll be like, ‘here’s some paper, take some notes.'”

Miller went on to echo Abrams Jr.’s point about staying positive, adding that it can be hard for freshmen to maintain a good mental attitude.

“A lot of our young freshmen, they’re kind of new to the position and college sometimes (can get) crazy,” Miller said. “You need to just stay in there and just weather the storm and it’ll all get better (in) the end.”

And the talent is there for new players.

Coach Tucker is pleased so far with freshman cornerback K.J. Trujillo who he said has already “stepped up and made some plays.” Newly-turned freshman defensive back Tarik Luckett is also on the coach’s radar. Luckett came to CU as a wide receiver, but will now make the change over to the defensive back position.

“I’m really happy that we moved Tarik Luckett over (to defensive back) because he shows up every day and makes some plays,” Tucker said. “He was making plays before he even knew what he was doing, so hopefully we don’t coach him down. I like his skill set, we’re going to need all those guys because we like to play a lot of (defensive backs). We like to play five to six every snap.”

While the trio of Abrams Jr., Blackmon and Miller will lead the Buffs, there is certainly no shortage of young talent on the roster.