Colorado women’s soccer looking to make some noise in 2019 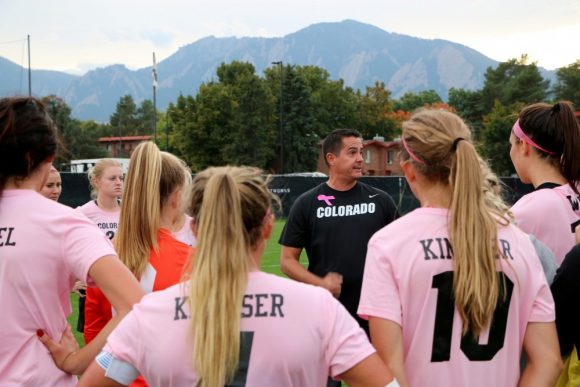 The University of Colorado women’s soccer team kicks off their season at Prentup Field in Boulder Thursday night with a match against Drake University. With just over two weeks between their first practice and first game, time is of the essence for the team.

But head coach Danny Sanchez is ready to get the season started.

“We’re excited to get going,” Sanchez said during CU’s media day in early August. “We’re excited about the group. We feel we have great senior leadership.”

Last season, Colorado began the year with a 16-game unbeaten streak – a program record. Unfortunately for the Buffs, their non-conference schedule in 2018 was relatively weak, hurting the team’s hopes of making the NCAA tournament.

The team wants things to be different this year. Sanchez said that while last season was disappointing, the Buffs will have their work cut out for them this season.

“We had a very good season last year,” Sanchez said. “Unfortunately, it didn’t end the way we wanted. So, we took the doubt out of it with the strength of our schedule this year. We play the defending national champions Florida State in Tallahassee on September 12.”

The Buffs will have no shortage of senior leaders this season with four senior captains. Leading the charge will be midfielder Taylor Kornieck, goalkeeper Jalen “J.J.” Tompkins, defender Kelsey Aaknes and forward Stephanie Zuniga. This should give coach Sanchez some confidence despite the difficult challenges the team is likely to face throughout the season. Sanchez spoke highly of his two senior captains, Tompkins and Kornieck, and how having them gives the Buffs an opportunity in every game.

“We have, we feel, two of the top players in the country in J.J. and Taylor,” Sanchez said. “So, that gives us a chance in every game to have an impact, so we’re excited.”

Colorado will enter the 2019 season a very balanced team because of the combination of upperclassmen and new players. A strong roster will be critical for the Buffs who will face the 2018 NCAA tournament teams as well as their Pac-12 foes. Sanchez called the Pac-12 the best conference in the country top to bottom.

Sanchez also assured that freshmen will play a significant role in the team this year.

“We’re excited, we have a lot of new players,” Sanchez said. “We have nine freshmen (and) a couple of transfers, so 11 of our 25 players are new. We don’t have time to mess around, they have to be ready to go and show what they can do. We don’t come into seasons looking to redshirt anybody. If they can play they’re going to play.”

“It was definitely probably one of the lowest points in my college career, but I just try to use it as motivation,” Tompkins said. “I think we all have.”

Tompkins said the team’s motto for the season fits well with the challenges they will face in 2019.

“Last year, our motto was ‘do more’ and we just didn’t do it,” Tompkins said. “(This year) my entire attitude is just to earn the right to be in the tournament, earn the right to win the game, earn it at every point. I think we’ve all taken that as an entire team and used that as motivation going forward into the season.”

The Buffs have the potential to be very dangerous with a berth in the tournament. With a team led by several seniors experienced in playing tough games and 11 new players, the Buffs are talented enough to be in the thick of the Pac-12 race. The question will be whether or not they are able to get through their daunting non-conference schedule. One thing is for sure, if their leaders can pave the way through a tough non-conference slate and remain contenders throughout Pac-12 play, Colorado will almost certainly be guaranteed a spot in the tournament.

Information for upcoming games and tickets can be found here.