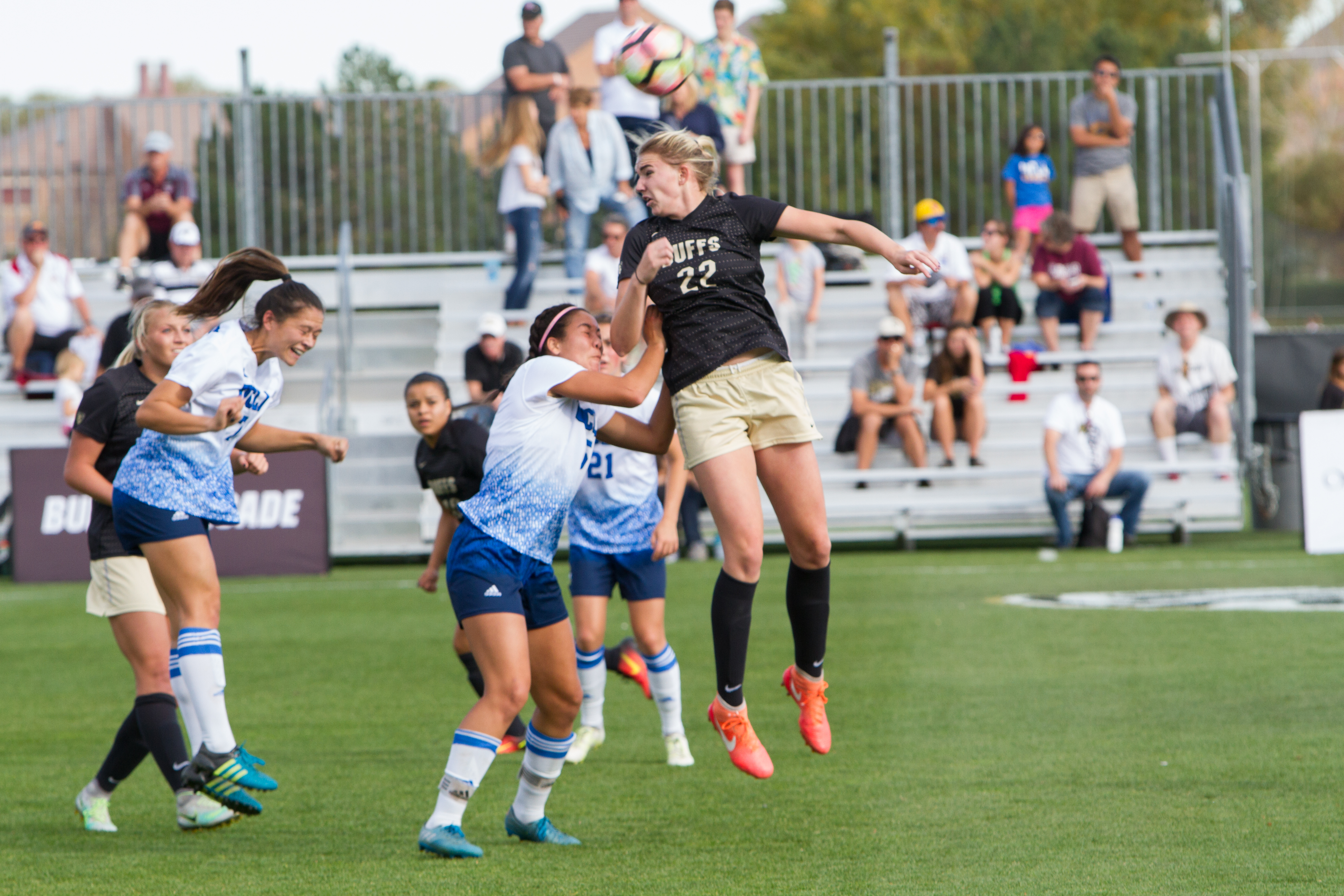 Midfielder Taylor Kornieck heads the ball during the Buffs’ 1-0 win against the UCLA Bruins on Thursday, Oct. 27, 2016. (Benjamin Chang/Independent File)

The University of Colorado women’s soccer team officially finished their spring season against Wyoming at their home of Prentup Field this past Saturday. Overall, the spring season ended with a promising three wins, one loss and a tie for CU.

The Buffs women’s soccer team has a long history of play between their neighboring University of Wyoming, which dates back to 1996. Colorado and the Cowgirls have met 12 times during that span, with the Buffs owning the series with nine wins. The Buffs last faced Wyoming in 2012, with CU emerging victorious. This weekend, the game ended in a scoreless draw.

Two of the seven graduating seniors from 2018, Isobel Dalton and Sarah Kinzner, had to step in to play for some players who were out due to injuries.

“Last season we were a really good team, and I think we were very disappointed that we didn’t make the tournament because we should’ve for sure,” senior forward Tatum Barton said of last season.

Last year, Barton contributed 11 goals and four assists in her 17 starts, while appearing in all 20 games for the Buffaloes.

The team elected new captains for the upcoming 2019 campaign. The new leadership includes four upperclassmen: redshirt senior goalkeeper Jalen Tompkins, senior defender Kelsey Aaknes, redshirt senior forward Stephanie Zuniga and senior midfielder Taylor Kornieck. The four captains were given the opportunity to step up and showcase their leadership this spring as the team moves forward without their seven seniors.

Now the focus shifts to the upcoming fall campaign. Before that, the team will embark on a 10-day team-bonding trip through France this June, where the Buffs will visit Paris and Montpellier while also taking in the 2019 FIFA Women’s World Cup. In addition to the leisure and team-bonding experience, the Buffs will also compete against four professional French soccer teams on the trip, gaining some extra practice time and experience while abroad.

“We have the unique opportunity to take our team to France for the Women’s World Cup this June,” head coach Danny Sanchez said in a press release. “We will be able to play against four professional French teams and get some additional training sessions in. I think the most important part of this trip is the cultural aspect. It is an opportunity for our team to bond as a group, heading into the 2019 season.”

The NCAA permits teams to take a foreign tour once every four years. In 2015, Sanchez took his team to Spain for a similar team-bonding trip.

While there is surely some excitement among the team ahead of their journey to France, the focus remains on the impending season and getting better while on their trip to France.

“[This upcoming] season, our main goal is to make the tournament and go to the sweet sixteen, and even further,” Barton said.

The Buffs had a solid 2018 campaign, earning a 13-4-3 record with an average of 2.35 goals per game and 17.2 shots per game en route to finishing fifth in the Pac-12 Conference and No. 46 in the entire nation. CU peaked at No. 15 in the United Soccer Coaches Poll last October, the highest the team has been ranked since 2009. Surely the Buffs will look to continue to improve those peaks this year.

The upcoming season is looking to be a strong year as coach Sanchez and associate head coach Jason Green continue to lead the team to victory. With the likes of Korneick and Barton, who are both entering their senior season and coming off successful 2018 campaigns, the sky is the limit for this year’s Colorado squad.

As fans and players anxiously await the release of the 2019 schedule, Buffs soccer will continue to prepare for a successful season throughout this summer.