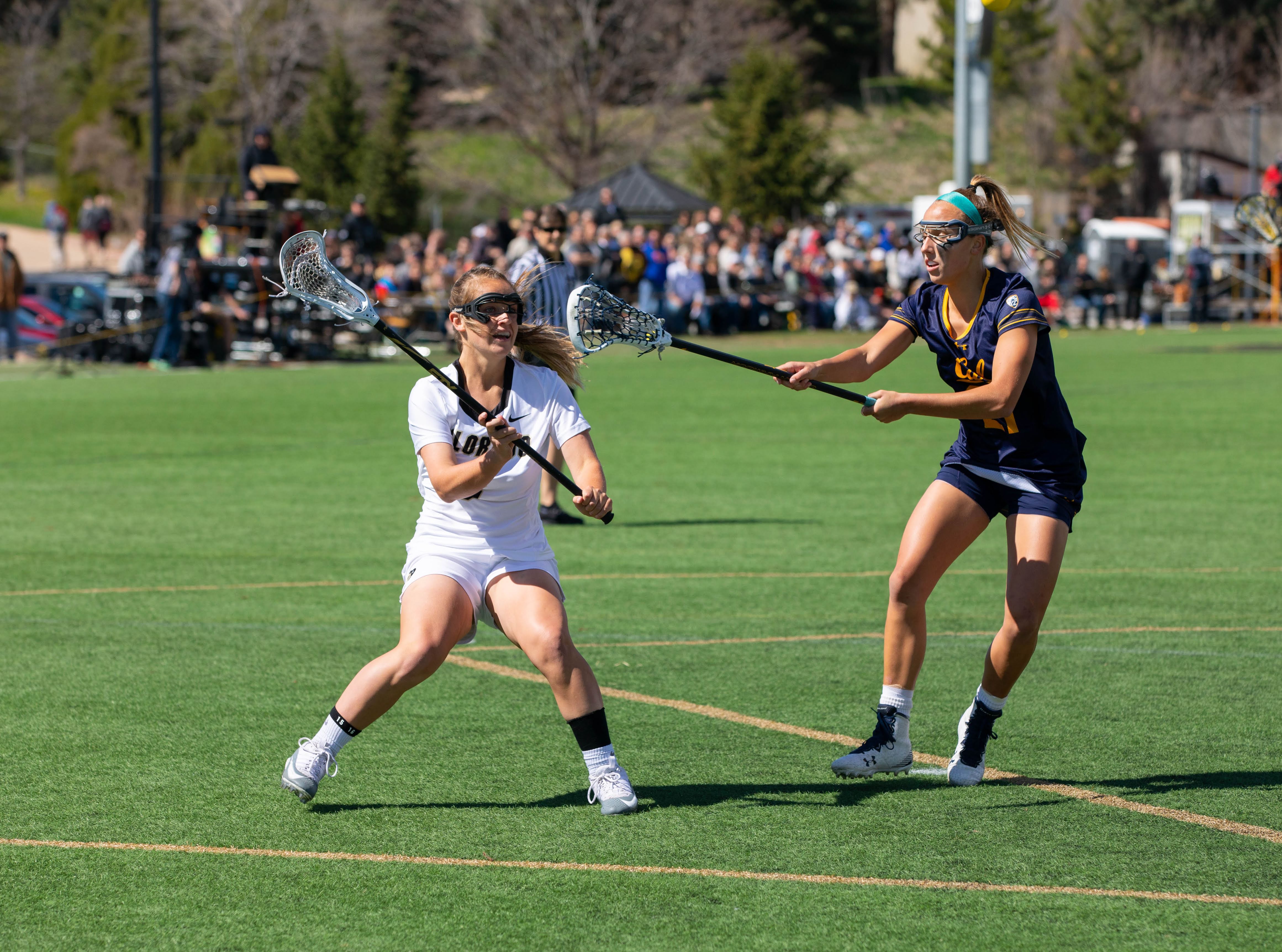 Senior attacker Samantha Nemirov passes the ball to an open teammate during the game against Berkeley. April 14, 2019 (Casey Paul/CU Independent)

The CU women’s lacrosse team took to Kittredge Field one last time against the University of California Berkley Golden Bears on Saturday afternoon.

After a hard overtime loss to Stanford on Friday night, head coach Ann Elliot Whidden asked one thing from her players at the start of the game.

“Play a full 60 minutes and work together,” Whidden said.

It was difficult for both teams to secure possession in the opening seconds. As the ball bounced into the California zone, senior attack Miranda Stinson scooped the ball and passed to fellow senior attack Samantha Nemirov for an easy goal.

Stinson got the ball two minutes later on a fast break and when it was only her and two Cal defenders. With the California goalie coming out to challenge Stinson, she had an easy open shot to bring the score to 2-0.

Colorado held possession for much of the game trying to find holes in the Cal zone. After a lot of passing, freshman midfield Liz Phillips found space and an easy look made it 3-0.

After pausing the game for a timeout, senior attack Sophie Castillo received a pass and proceeded to go around the goalie. Without having any open teammates she passed it to sophomore midfield Sadie Grozier who extended the Buffs’ lead to four. Minutes later, Grozier got an assist as Nemirov brought the score to 5-0.

California was able to score with 17 minutes left. Senior attack Caroline Corzel earned a free position shot to make it 5-1.

California looked to close their point gap by passing and penetrating the Colorado zone. Cal had a shot attempt that junior goalie Julia Lisella stopped and the ball went airborne. Lisella quickly got the ball and put it into play for the Buffs to keep the momentum going.

With Lisella’s hustle and the Buffs asserting their control over the game, Stinson got her second goal of the night.

California still tried to get something going. With the ball behind the net, the Buffs successfully forced Cal out but neglected to protect the front of the net, where sophomore midfield Ashley Ward made it 6-2.

The Buffs retaliated and senior attack Sophie Castillo made it 7-2 with 11:38 left.

“We brought a lot of energy from this game that wasn’t there Friday night and it made a difference,” Castillo said.

Colorado brought the energy and outplayed Cal in the first half. The Buffs would sandwich a Golden Bear if there were loose balls to maintain ball possession and score.

“One of the things I told them was to finish playing defense down the stretch,” said Whidden.

The hustle earned Stinson a free position shot, which made the score 8-2 and gave Stinson a hat trick.

With 6:51 left on the clock, the Buffs extended their lead to 9-2 with another free position shot from Grozier. Seconds later, Grozier would get an unassisted goal to become the second Buff to score a hat trick during the game.

Cal worked to match the Buffs’ energy and physicality. However, with five minutes left in the first half Colorado made the score 10-2 and showed no signs of stopping.

The third hat trick of the day would come from Nemirov who made the game 11-2. With the Buffs’ defense working Cal, they ran out the clock — senior midfield Blair Sisk extended the Buffs lead and took half, 12-2, in the final seconds.

California was in a hole and came out of half with a little more energy. They moved the ball better and had higher rates of lob pass completion during this half. They were no longer afraid to penetrate the Colorado zone, and senior attack Kirsten Swanson scored Cal’s third goal of the night.

With momentum still on their side, the Buffs continued to score with unassisted goals from Stinson and Castillo.

Cal returned the favor with a shot from Swanson to make it 14-4. Moments later, Cal closed the gap after a senior midfield Eliza Christman slipped a ball past Lisella.

California and Colorado were playing more physical this half; it was a battle for every ball and possession.

“They had a different speed and energy in the second half and we just had to still play,” Castillo said.

After minutes without scoring, Colorado senior attack Caroline Perry made a goal to make it 15-5 after three shot attempts with 10:32 left. With 7:05 left, California would find the back of the net to make it 15-6 after a lot of cutting and passing.

In the final minutes, defense on both ends of the field kept the game interesting. Stinson and Castillo were everywhere, using their speed to put pressure on California’s attackers. Everyone on defense worked together to prevent any shot attempt.

In the end, Colorado finished senior day with a 15-6 victory.

The Buffs travel to Eugene, Oregon for the final game of the regular season against the University of Oregon. The game begins at 8 p.m. 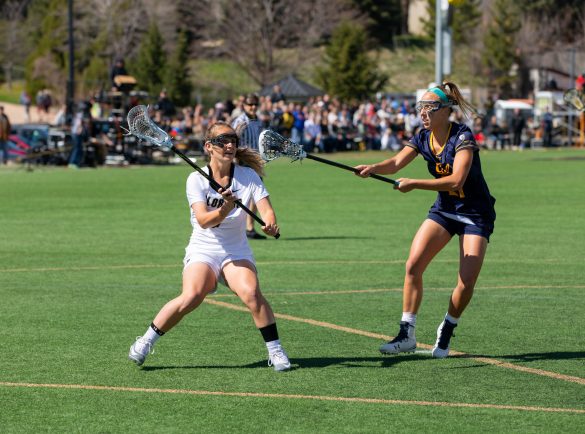 Senior attacker Samantha Nemirov passes the ball to an open teammate during the game against Berkeley. April 14, 2019 (Casey Paul/CU Independent) 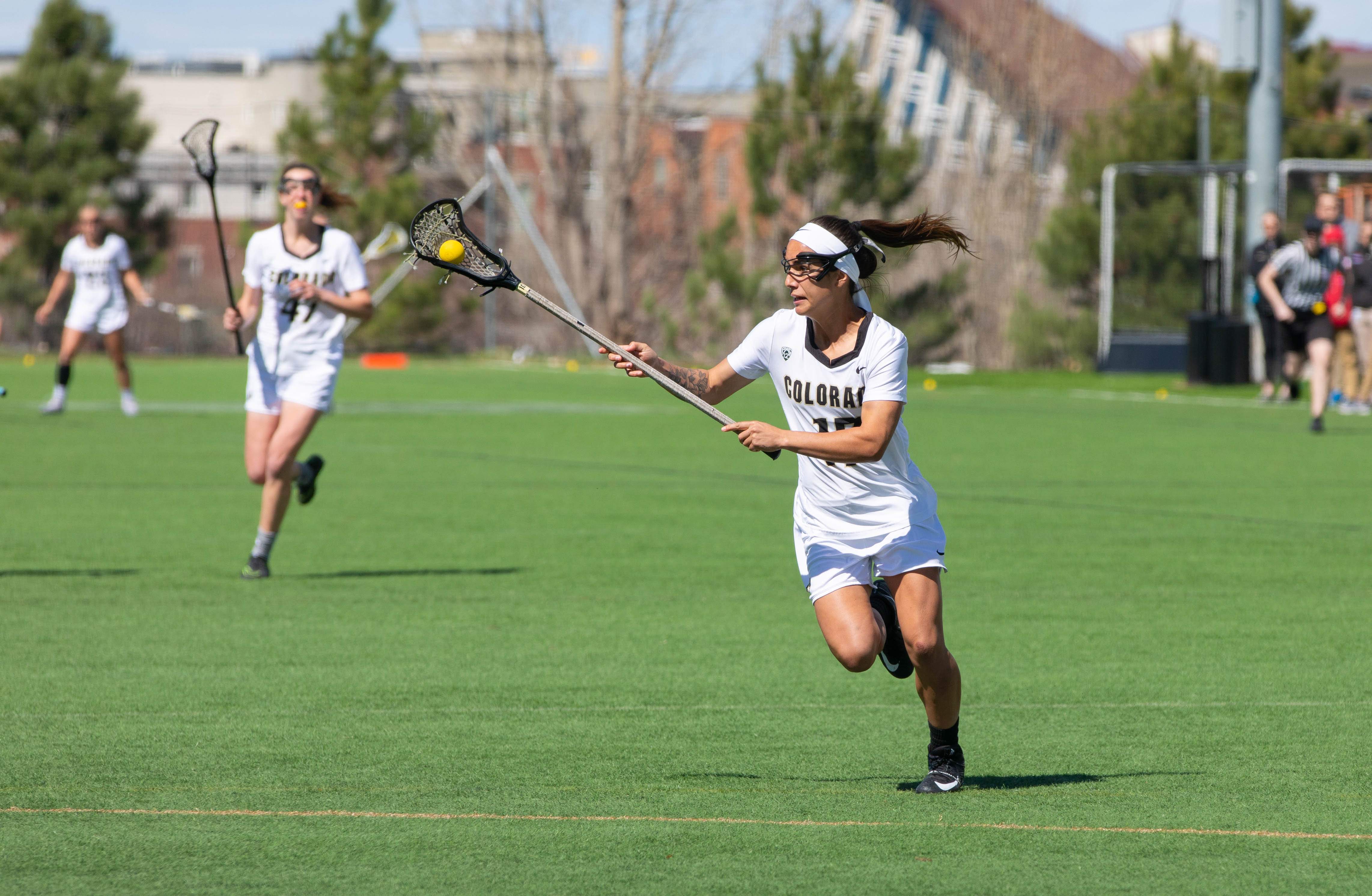 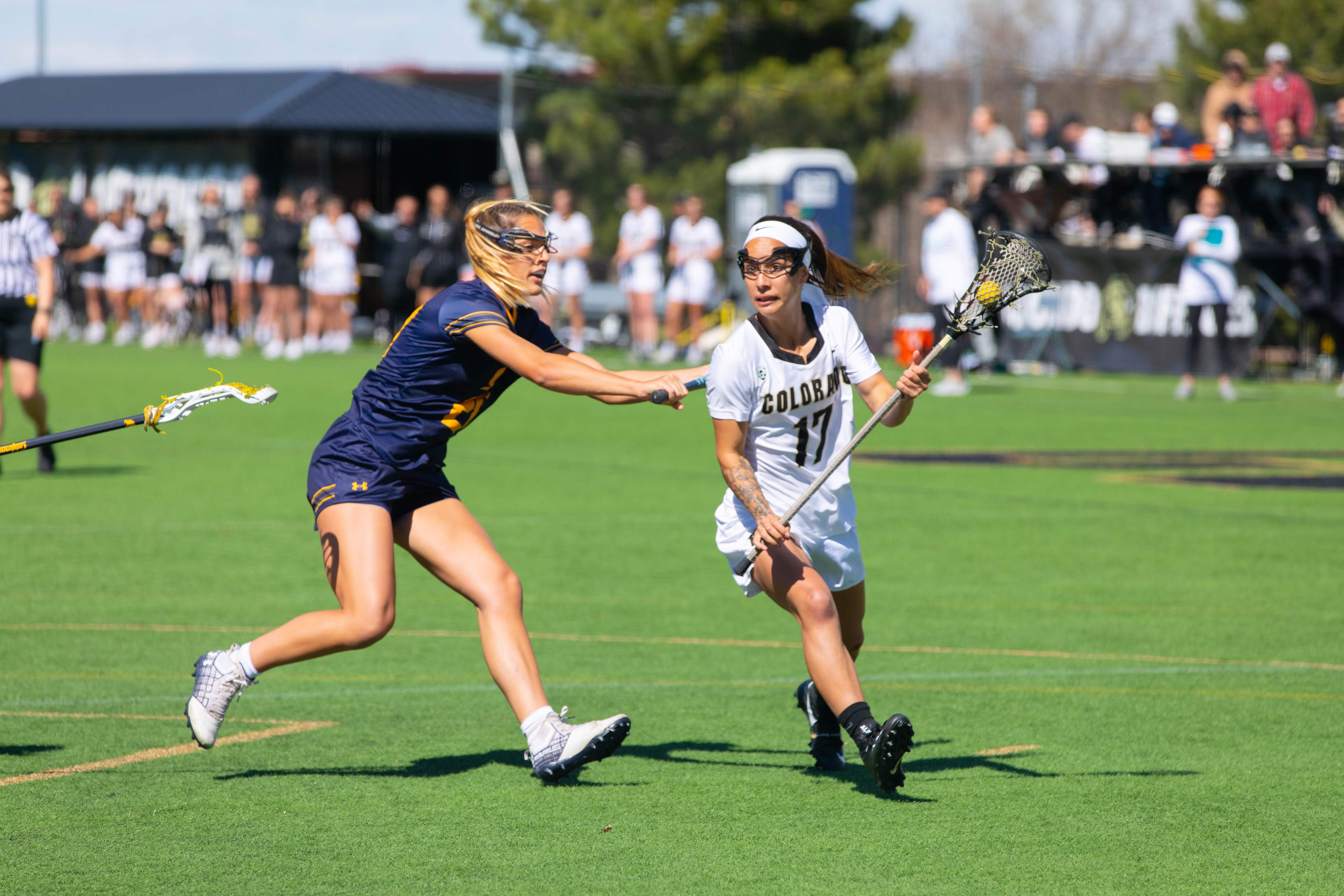 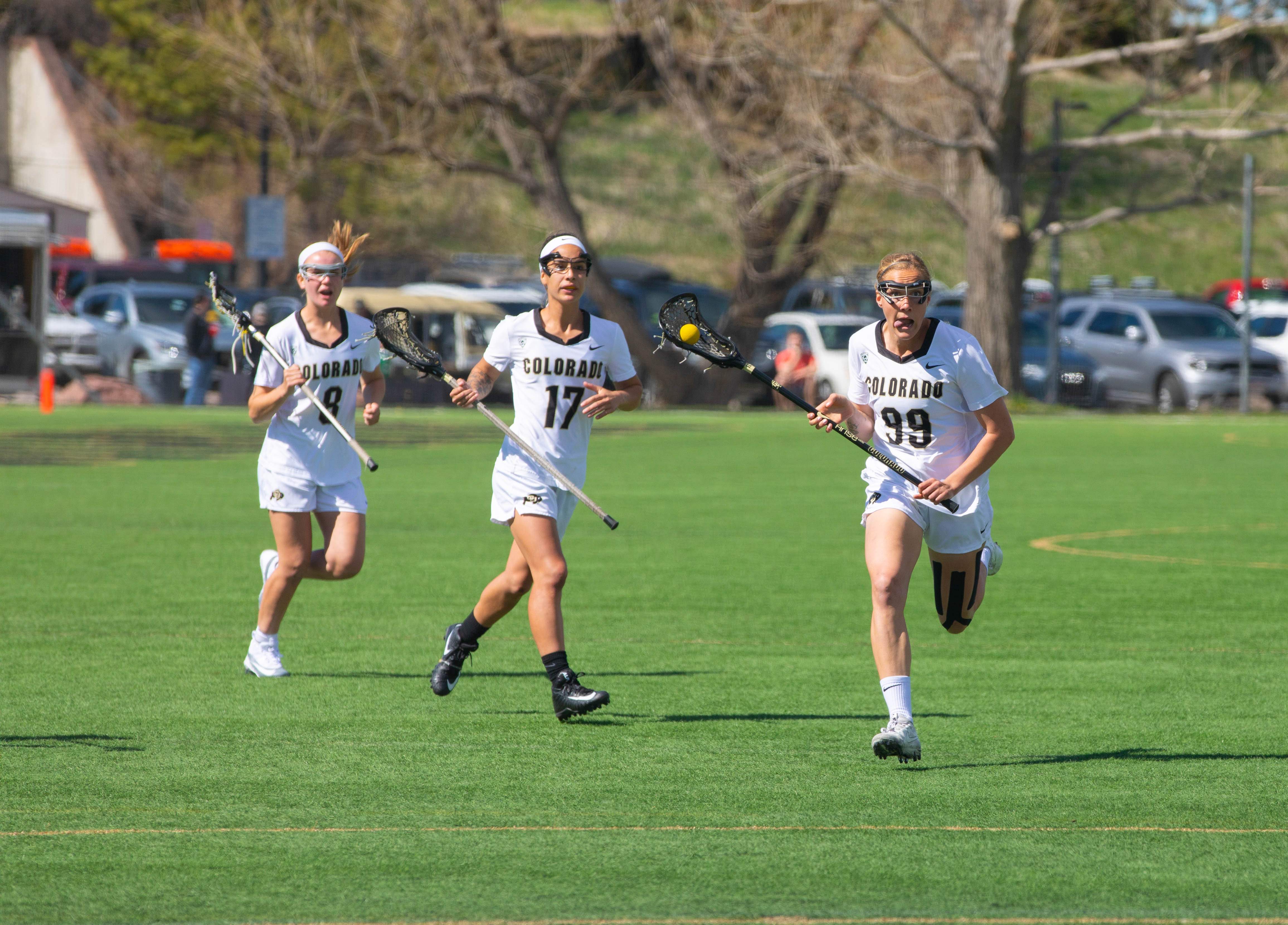 Senior midfielder Blair Sisk sprints the ball down the field with her teammates not far behind. April 14, 2019 (Casey Paul/CU Independent) 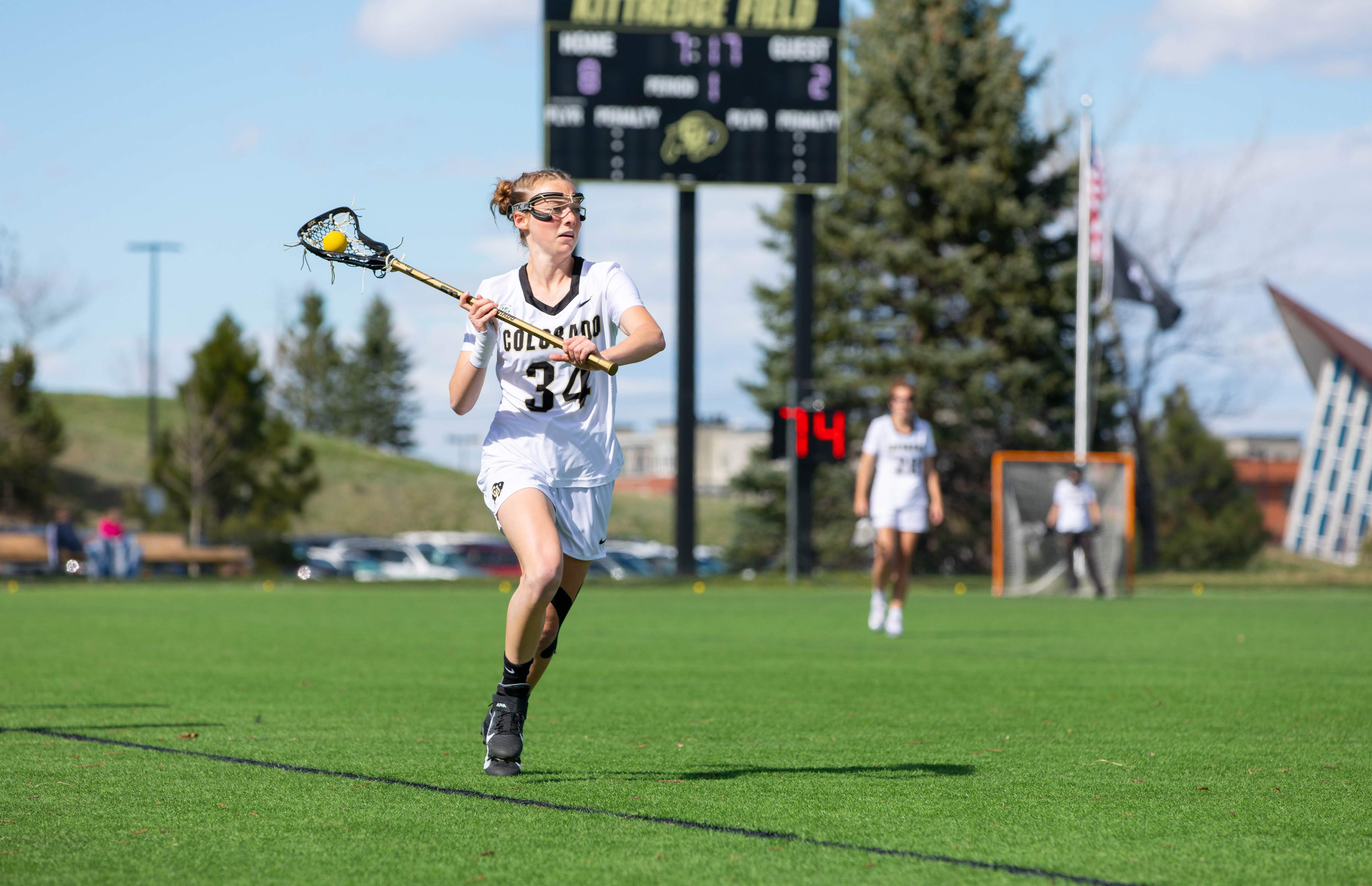 Junior defense Elinor Wolf runs down the field as she searches for an open teammate. April 14, 2019 (Casey Paul/CU Independent)