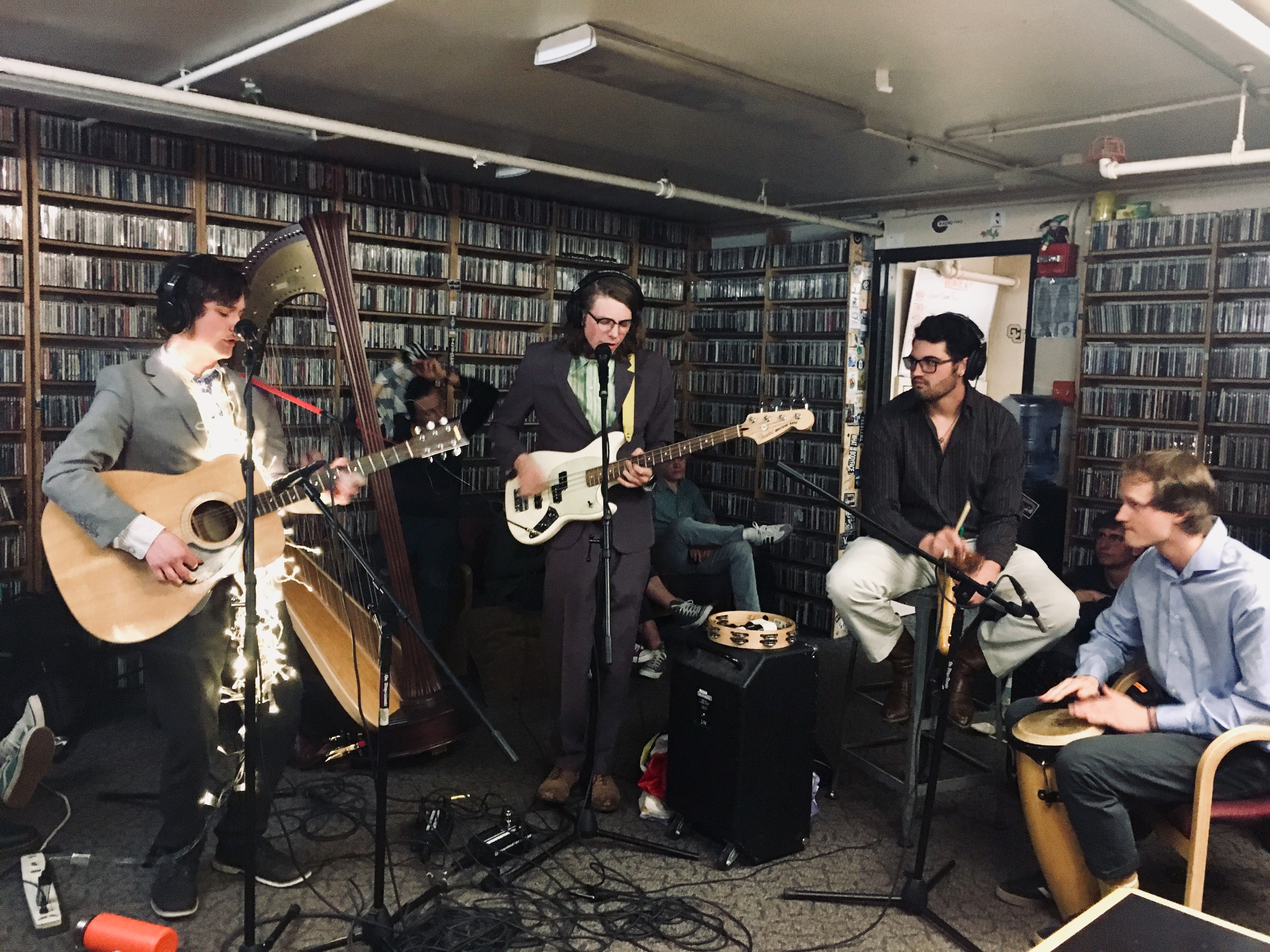 The post-spring break return of Radio 1190’s weekly live music session, the Local Shakedown, brought Loveland-based band Satellite Pilot to the studio on Friday. filled the studio this week with their ‘’ sound.

The band performed dressed like a wedding ensemble from the 60s or 70s, complete with suits and smart shoes. A somewhat random bunch of fairy lights draped around the lead singer’s neck resembled a futuristic scarf. They dress this way because they want to look unified and they like the 60s look in particular — personally, I think it works.

The band’s sound and look resemble the British band The Kinks to a degree, and appropriately frontman Alex lists them as one of their influences. Other influences include The Beatles, The Beach Boys and The Flaming Lips. They also cite Kendrick Lamar as an influence for the ‘energy’.

I was immediately excited upon seeing the large harp towering in the corner of the room. Any instrument which is rarely seen within a rock or pop band is a welcome addition, in my opinion. Unfortunately, the harp was barely audible. I almost forgot it was there on several occasions, which is a difficult feat considering its size. While this isn’t necessarily the fault of the band, it could have been nice to have heard a harp intro or an opportunity for Fournier to show off her skills.

That aside, their sound and the show was both enjoyable and captivating. It was certainly interesting when the lead singer, on occasion, sounded like a toddler having a tantrum, which seemed to be intentional. His voice resonated with the vocal styles of Morrissey, Robert Smith and Jake Bugg — further proving that the band seems to be inspired by a more British sound rather than an American one.

Satellite Pilot played a total of five songs. Standout tracks included ‘Let’s Get Telepathic’ a wistful, melodic tune (think ‘Waterloo Sunset’ by The Kinks) and ‘Galapagos on my Island’. The latter’s lyrics, which described being on an island, were clever and the band themselves seemed like a group of laid back teenagers just jamming on the beach. Halfway through the song, the singer ‘meowed’, which gave listeners a sense of their eccentricity.

After a shaky start, the band warmed into their set. Despite being considered an acquired taste, their performance showed clear moments of musical talent and intuition. Satellite Pilot brought a quirky and eccentric twist to the sounds of the sixties.