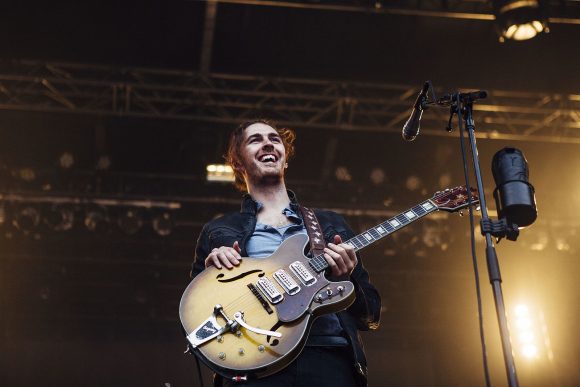 British singer Jade Bird opened the show. Her enthusiasm and passion electrified the crowd. Despite being only a one-woman show, she held her own in the large theater. She had a strong stage presence, jamming with her upbeat songs, completely at ease with only her voice and an acoustic guitar. During her belted notes, the crowd let out whoops and hollers.

When Hozier stepped onstage, the crowd went wild. He energetically launched into a few songs from his new album “Wasteland, Baby!” including his new single “Nina Cried Power”.

He sounded exactly the same live as he did on his albums, quite a feat in the digital, auto-tune era. His booming, powerful voice washed over his fans, filling the auditorium with a wall of sound.

Hozier’s stage presence was understated but effective. For most of the performance, he remained at the front of the stage, calmly singing and playing guitar. Surrounded by a whirlwind of movement onstage, he was a still and grounding presence.

Being onstage seemed effortless for him. Between songs, he casually chatted with the crowd. He was sweet and charming, joking easily with his fans and sharing his musical insights.

The show, however, did not flow as easily. Between every single song, a guitar technician frantically ran onstage and switched out Hozier’s guitar. Every single song. The poor man’s sprint on and off stage every few minutes broke up the musical flow, especially considering the concert had 17 songs. It was distracting and unnecessary.

The flow of the setlist was also a bit disjointed. During the hits from his 2014 album “Hozier,” the crowd shrieked in delight and shouted the lyrics along with him. The excitement lulled with his new tracks and most audience members did not seem to know the lyrics by heart.

At least when crowd favorites, such as “Someone New,” “To Be Alone” and “Jackie and Wlson,” began, the excitement came back up. Hozier and the rest of the band also seemed more engaged with the old hits, comfortably grooving with the great riffs and beats.

When the first notes of his breakthrough hit “Take Me To Church” played, the crowd’s enthusiasm reached its peak. Hozier gave it his all until the last note, belting out “Amen” at the top of his lungs over the slow beat and the echoing harmonies. When he left the stage, he knew he would be coming back for an encore.

For the encore, he played “Cherry Wine” and “Work Song.” During “Cherry Wine,” the crowd waved their phone flashlights and shouted “sweet as cherry wine” along with Hozier. He captured the audience’s hearts with his tender, crooning vocals. Then he finished strong with another first album hit, “Work Song.”

The lyrics “No grave can hold my body down. I’ll crawl home to her” echoed through the room as the night came to a close.