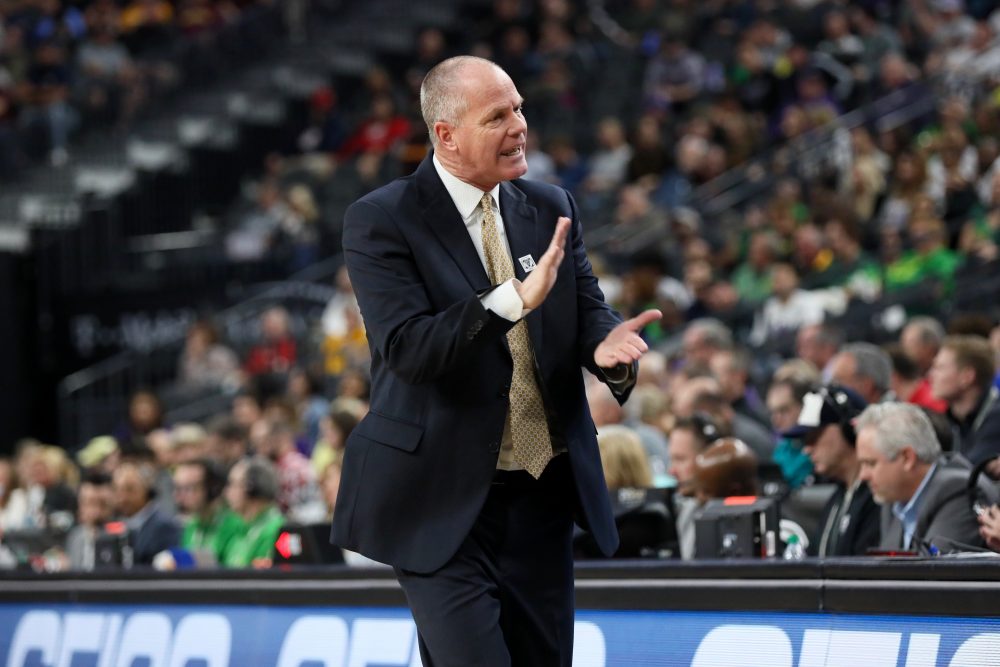 Colorado head coach Tad Boyle attempts to motivate the team during the waning minutes of the second half of play at T-Mobile Arena. March 15, 2019 (Nigel Amstock/CU Independent)

In last Tuesday evening’s 78-73 victory over Dayton, the Colorado Buffaloes allowed the fifth-highest opponent make rate of the 2018-19 season to the Flyers, who sank just under 55 percent of their shots from the floor.

Arizona State shot the best in a single game against CU this year, as the Sun Devils made 57.1 percent of their shots in an 83-61 win over the Buffs in Tempe on Jan. 5.

At the end of the day, Dayton shot significantly better than the 42.7 percent season average that Colorado has held opponents to.

The Flyers are no joke offensively — Obi Toppin ranks fifth in the nation in shooting percentage while Josh Cunningham is ninth, making Dayton the only NCAA team with two players in the top ten. That said, there was more to the equation on Friday than lights out shooting on the part of the Flyers.

“During the game, I was thinking ‘Dayton’s really good,’ and they are good — they move the ball really well … but after watching the film, part of [our struggles were] on us,” head coach Tad Boyle said.

Colorado will in total have had five full days to iron out any kinks before eighth-seeded Norfolk State comes to town for round two of the NIT Tournament in what will be the Buffs’ final game of the season at the CU Events Center Monday night.

Boyle has stressed the do-or-die importance of accomplishing that.

“If you don’t clean it up after a game, you pack your stuff and get ready for next year [because] the season’s over with,” he said. “That’s the thing I want out guys to understand — we snuck [past] Dayton with a subpar defensive performance because we were pretty good offensively.”

Sophomore guard/forward D’Shawn Schwartz had a lot to do with the offensive output. His 19 points were the second-most he’s scored this year, behind only his 22-point performance against Washington on Jan. 12. Schwartz’s five made three-pointers marked a career-best.

“It’s easy this time of year to blame your body breaking down and make excuses but you can’t do that at this level,” Schwartz said. “You’ve got to keep playing and that’s what I’ve been trying to do.”

“They’re a really good team … they beat Alabama and we’re all in the same tournament,” junior guard Shane Gatling said. “Anybody can beat anybody.”

Gatling was another guy that Boyle touched on in the aftermath of the Dayton game. Specifically, Boyle expressed disappointment in Gatling’s defensive performance versus the Flyers.

“[Shane] is capable, but sometimes you take a couple steps backwards as a player and [Tuesday] was a step backwards for him,” Boyle said. “He’s become a pretty good defender here down the stretch … But the other night against Dayton … he wasn’t competing. That’s why we pulled him out. I talked about it with Shane — he knows the situation so hopefully he can come out and do something about it.”

Gatling remains confident that he can rise to the occasion. He was on the receiving end of praise from Boyle for his defense during the Pac-12 Conference Tournament, especially for his efforts against Oregon State’s Ethan Thompson.

“He challenges me a lot,” Gatling said. “The Oregon State game he started me on … one of their leading scorers. He trusts me on defense and I have to keep that trust between me and my coach.”

Norfolk State comes to Boulder fresh off a 80-79 upset of top-seeded Alabama in the opening round of the NIT, a victory earned in overtime on the road in Tuscaloosa.

Spartans senior guard Derrik Jamerson, Jr. dropped 25 points off the bench for Norfolk State, the second-highest such performance of the year for him.

Including Jamerson, the Spartans had four players score in the double-digits, outlasting the Crimson Tide in overtime despite shooting only 30-for-80, or about 38 percent, from the floor in the win. They outrebounded Alabama, 49-45, as well.

“Norfolk has got [a few] guys that really shoot the ball well … we’re going to have to guard the three-point line and we’re going to have to be in the gaps and shrink the floor,” Boyle said. “Norfolk State does a great job on the offensive glass, so once the shots go up, we better be getting bodies on people ready to compete, because they offensive rebound very well.”

By all indications, the Buffaloes will have their main rebounding weapon on the floor Monday night, as sophomore guard/forward Tyler Bey, who tweaked his knee after a hard crash under the rim during the Dayton game, practiced on over the weekend without issue.

“He looked good [and is] just getting the confidence back,” Boyle said on Friday. “Any time you tweak a knee or an ankle like he did, it’s being able to trust that thing when you cut and when you dunk … it hasn’t affected his athleticism. Coming back from injuries is as much mental as it is physical.”

Colorado and the Spartans tip-off at 7 p.m. on Monday, March 25.