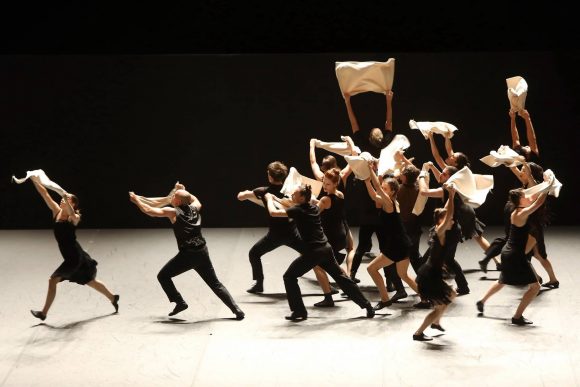 The Batsheva Dance Company performed to a sold-out audience at Macky Auditorium on Wednesday, March 20.

Across the street from the auditorium, a chaotic scene unfolded before the performance. Anti-Israel demonstrators protested the company, which is based out of Tel Aviv, Israel. They held up large “Boycott Israel” posters and shouted at incoming audience members for supporting Israel’s oppression against Palestine. A man wearing a traditional Jewish kippah shouted back at the protesters in anger.

Once the performance began, however, the angry protesters were soon forgotten. The company’s powerful, dynamic dancing and one-of-a-kind choreography captivated the audience. The consummate dancing left nothing to be desired.

After a while though, the repetitive choreography no longer resonated with the audience. The second half of the performance was nearly the same as the first. They added a few cosmetic changes, including contrasting music and different dancers, but these changes did not merit a 30-minute repetition. Many audience members left.

The choreography was brilliant for the first time, at least. With their backs to the audience, the dancers were still for a few moments while beautiful Gregorian chant music echoed through the auditorium. Then, they exploded into motion. Quickly skipping in circles, the dancers created an undulating pattern which mirrored crashing ocean waves.

The rest of the performance used this push and pull wonderfully as well. Slow, still scenes were suddenly punctuated by vigorous motion as dancers executed complicated, graceful sequences at lightning speed. Their rapid motions almost seemed random. Yet, viewed as a whole, the chaos was planned, creating an impressionistic landscape of movement across the stage.

The company often explored unique cross-genre experiments. Three dancers rapped “Dead Wrong” by The Notorious B.I.G. ft. Eminem, a violent, disturbing and explicit song over the peaceful Gregorian chanting. Meanwhile, the rest of the dancers were jumping tirelessly from side to side behind them, never running out of breath.

They later used dance as a tool for conversation. One dancer would perform a sequence, and then another would dance an intricate response. Tension built in their conversation as an ear-shattering drone emanated from the enormous speakers, eclipsing the chanting.

The dancers began kicking and punching the air and banging their heads against invisible walls until one dancer screamed at the top of his lungs, his voice cutting through the deafening noise. The sequence ended with a female dancer aggressively kissing a passive, detached male dancer’s cheek as he gazed into the distance.

The evening’s choreography was a mystical and otherworldly — at least until they repeated it verbatim.