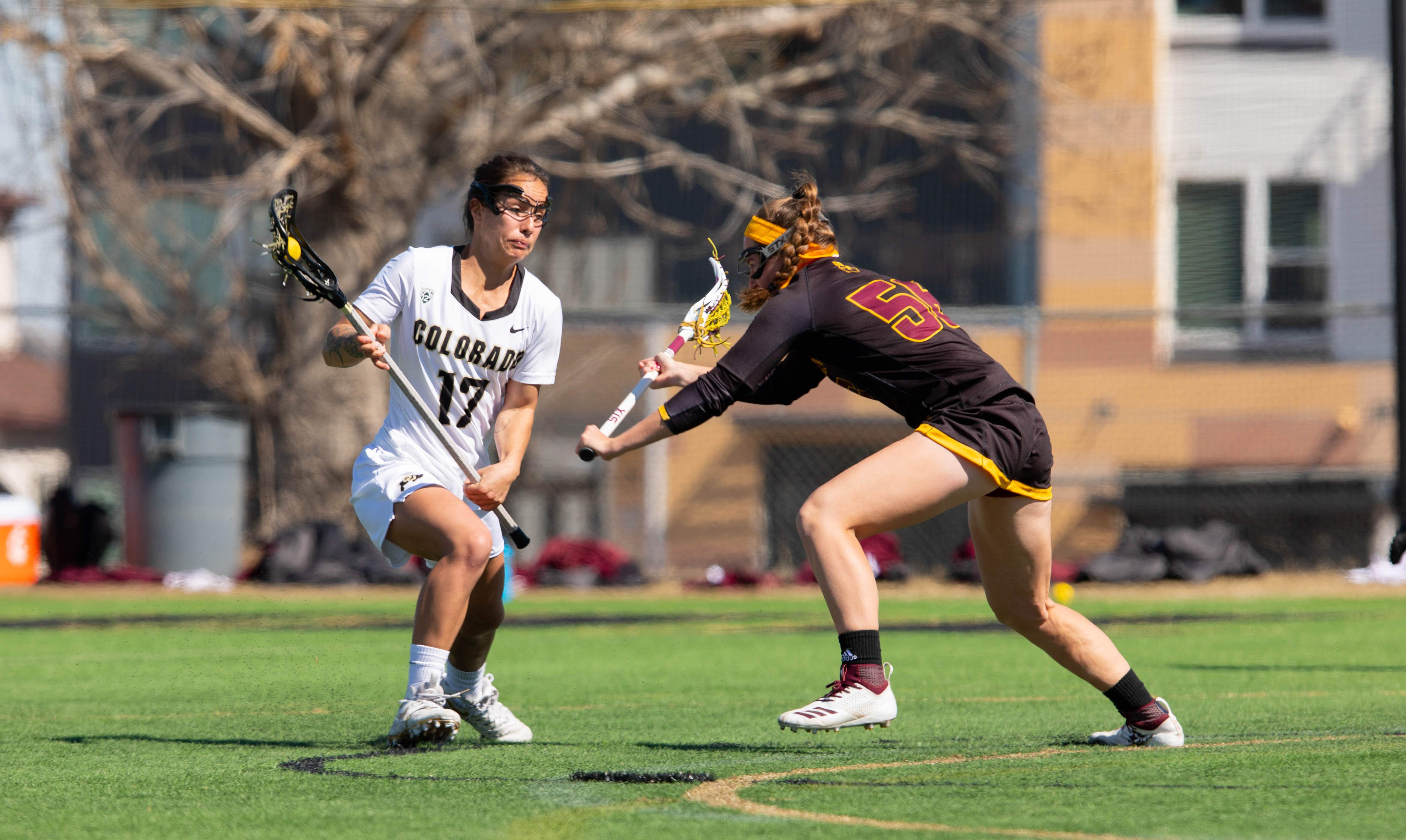 Senior attacker Miranda Stinson tries to get around her opponent, the ASU Sundevils, in order to make another goal. March 17, 2019 (Casey Paul / CU Independent)

The No. 23-ranked Colorado women’s lacrosse team thrashed the Arizona State Sun Devils, 15-3, on Sunday afternoon at home, putting Colorado at 4-4 on the season and handing the Buffs their first home win of the year.

After Colorado suffered a tough 11-5 loss to USC yesterday, the Buffaloes burst out of the starting gates ready to go

“For us, it’s about getting better and not going backwards,” said head coach Ann Elliott Whidden. “We can’t afford to go backwards anymore.”

Just 48 seconds into the game, Colorado sophomore midfielder Sadie Grozier found the back of the net after Colorado won the face off.

Moments later, senior attacker Miranda Stinson earned a goal with 28:41 left in the first period with an easy juke past a defender. Just like that, the Buffs were up quickly, 2-0.

ASU looked sluggish in the opening minutes but finally pushed into Buffalo territory. In the next few minutes, CU kept up the pressure but ASU goalie junior Berkeley Bonneau settled down to make some crucial saves. She would go on to make 20 saves, a career-high for her.

A third goal came after CU had crisp passing, sharing the ball and keeping a fast pace. Stinson sent the perfect pass to senior attacker Sophie Castillo, who cut right in front of the goal with 20:17 left in the first period to widen the Buffs lead.

“In the USC game we came out really slow and this game we [knew that] we had to push [in] transition, go hard and that’s what I did,” said Stinson.

With Stinson continuing her success from yesterday’s game, ASU displayed a lack of speed and was hit with many penalties, making for an unfortunate combination. With 12 minutes into the game CU was awarded five free-position shots. The amount of penalties resulted in yellow cards so ASU players had to sit for two minutes.

With the man advantage, CU couldn’t get anything going, but the Sun Devils did, as attacker Kerri Clayton ran with the ball behind the net and fired a pass to a diagonally-cutting Paige McGlothlin who beat CU junior goalie Julia Lisella over her left shoulder.

Both teams then began to trade goals. First, senior attacker Samantha Nemirov scored on a quick wrist shot, followed close behind by a goal by ASU’s Clayton.

Next, Stinson was fouled with the free shot scored with 13:37 left in the period, making it 5-2 Buffs.

ASU quickly responded again, working from behind the net and passing it to a Sun Devil attacking zone. The goal (and final one for ASU) was scored by attacker Kate Dougherty to make the score 5-3 Buffs with 11:43 left in the period.

After another goal by Nemirov at the 10:40 mark, Stinson completely took over for Colorado, scoring four consecutive goals some within minutes of each other. Her fourth straight goal and sixth of the first period gave her 27 goals total on the season.

After her sixth of the day went in, the Buffaloes were sitting pretty with a 10-3 lead with 5:38 left in the first period.

ASU just had no answer for Stinson or the Buffs, as Colorado outplayed the Sun Devils in almost every aspect of the game. For about seven minutes, the Sun Devils didn’t generate any offense at all.

Before the end of the first period, Nemirov scored her third of the day and Castillo got her second. At halftime, Colorado had outshot ASU, 28-8, and had only let up four turnovers compared to the Sun Devils’ 10.

Heading into the final half, the Buffaloes held a 12-3 lead.

To the casual fan, it looked as though CU was perfect in the first period. However, Whidden wasn’t completely satisfied.

“I thought offensively we did a little bit better of a job,” she said. “Going up against ASU, I thought we dodged well and hard, but… we are still making some of the same mistakes.”

The second period was more of the same for Colorado, just with less goals but still dominating possession.

“Defensively, we did a lot better,” said Stinson. “We only let in three goals and offensively, we had some more girls going hard today and we need that.”

With 15:52 left, Castillo scored a stunning goal for CU to make it 14-3, joining the hat-trick club with Nemirov and Stinson. Castillo carried the ball around the back of the net and cut back in front of it. Spinning back towards the baseline and she fired a bounce shot through the goalies’ legs.

With just 47 seconds on the clock, Colorado freshman midfielder Kate Burnside earned a free position shot and scored. It was her first goal of the season and first career goal with the Buffaloes. Burnside’s was the last of the game.

“We didn’t have a great game yesterday,” said Whidden. “Obviously, to get the win is exciting for us and it’s a win we need — it’s a conference win so it helps us out in the long run”

Colorado’s next game will be played against the University of Oregon at home on Saturday, March 23 at 1 p.m. MST. 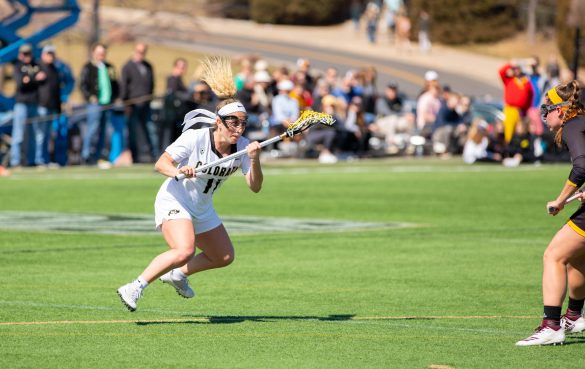 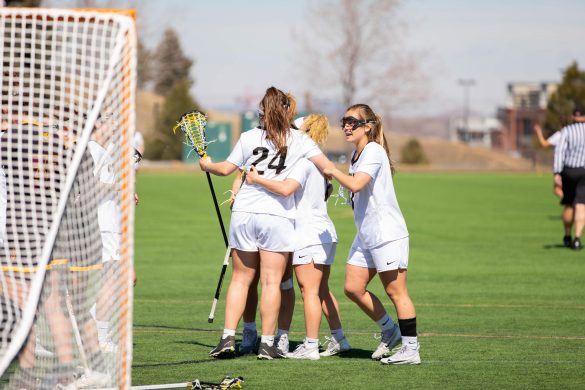 The CU Buffs women's lacrosse team give each other hugs after another goal. March 17, 2019 (Casey Paul/CU Independent) 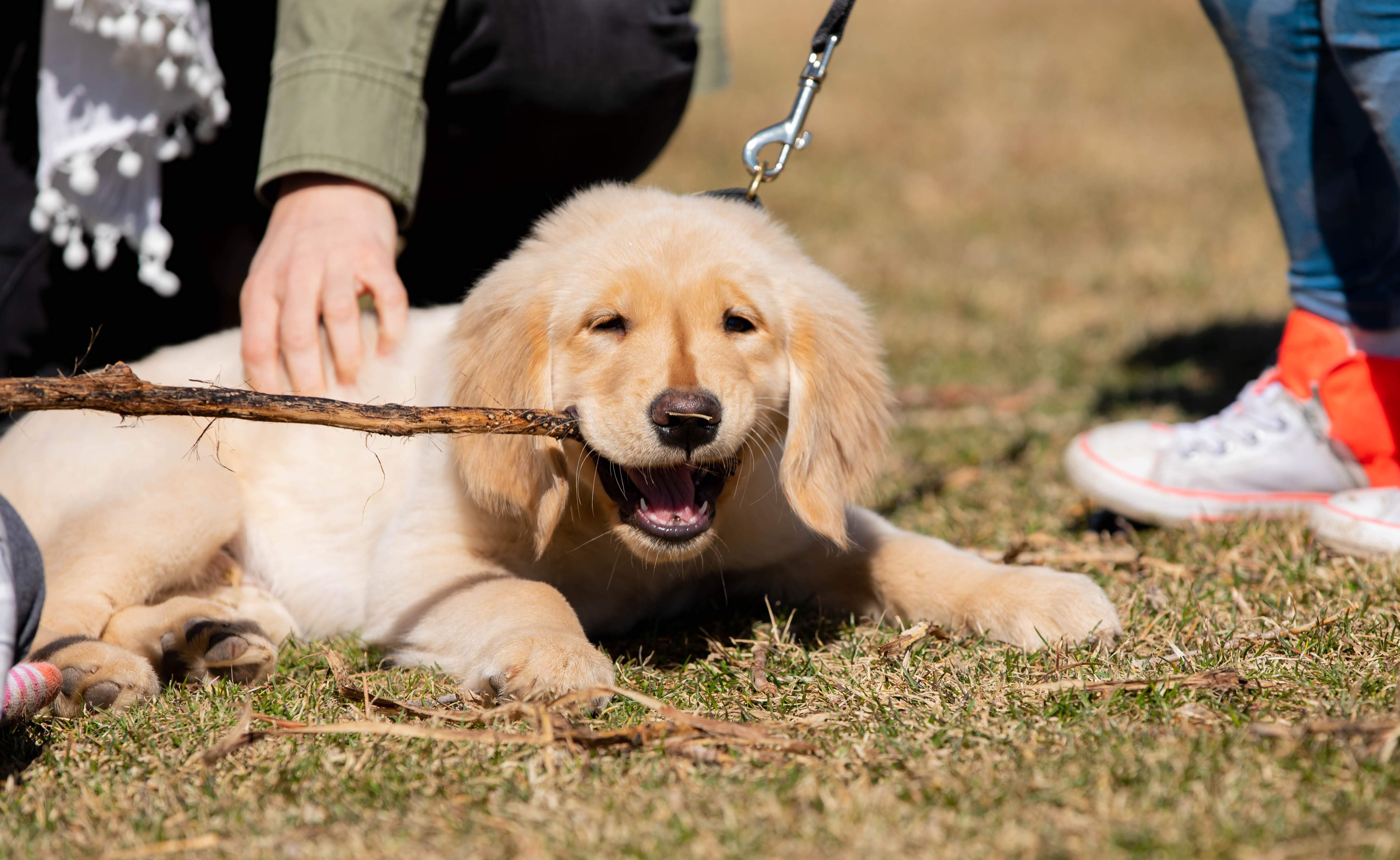 One of the adorable puppies that showed up for the free CU dog leash during the CU women's lacrosse game. March 17, 2019 (Casey Paul / CU Independent) 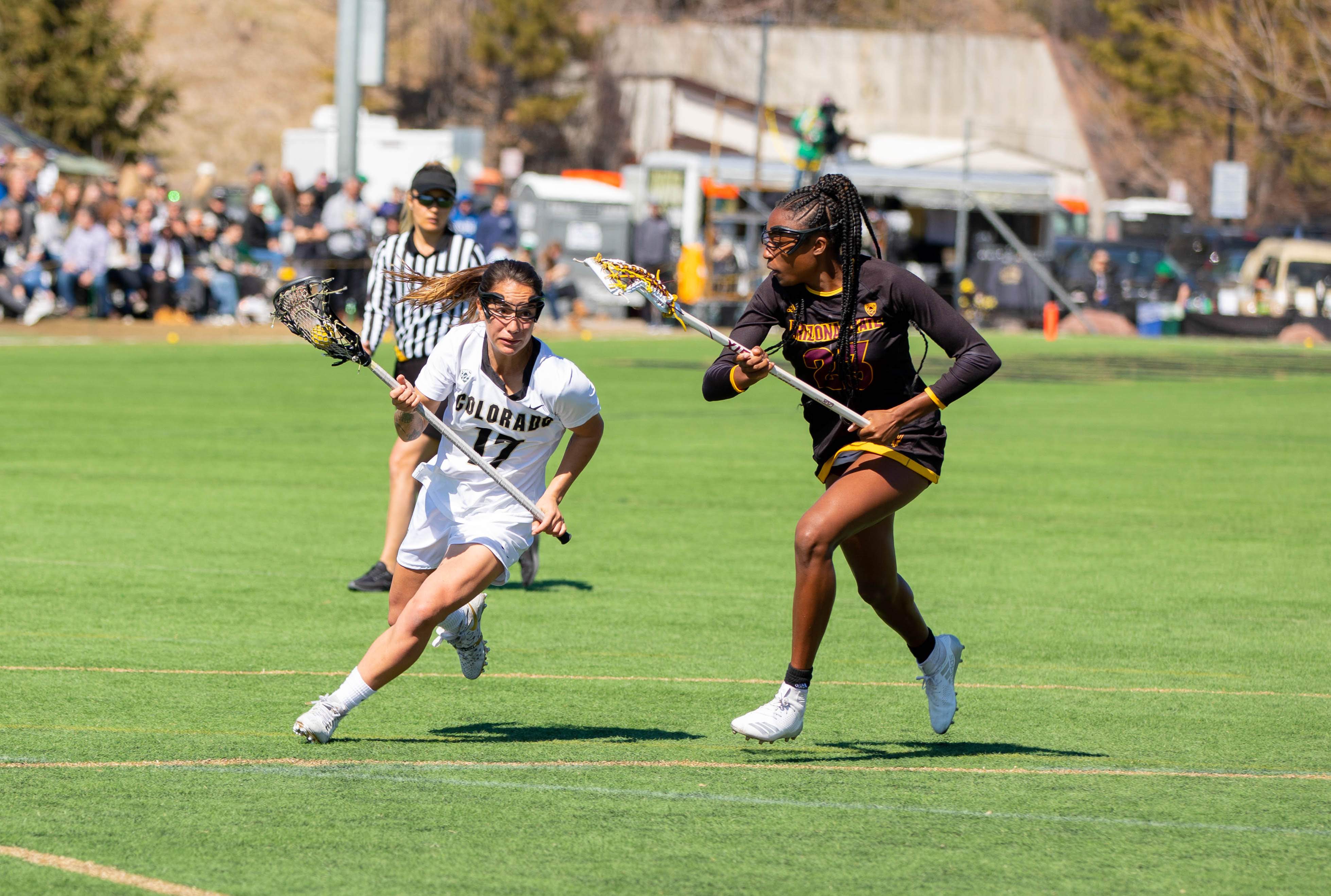 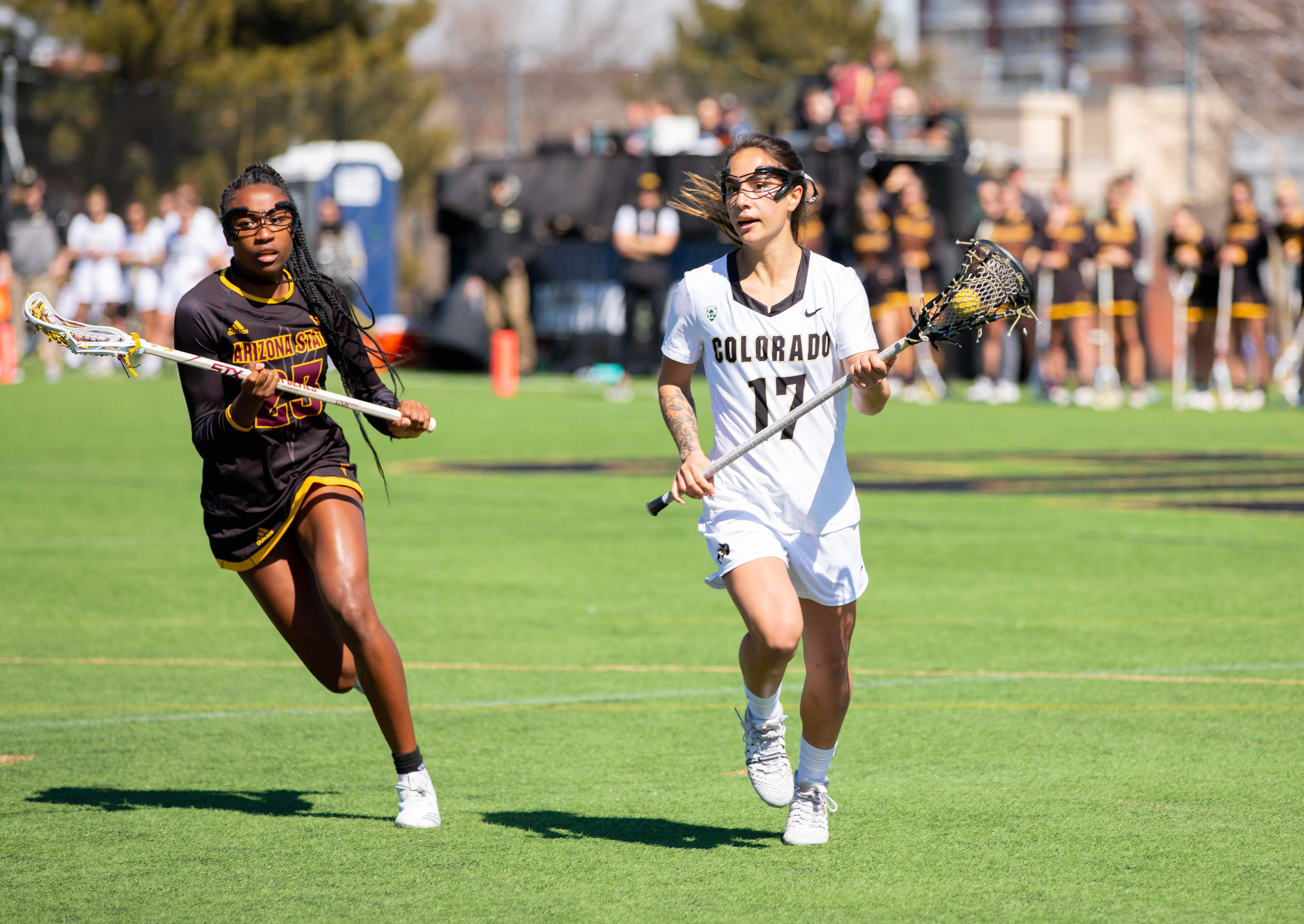 Senior attacker Miranda Stinson searches for an open tammate to pass the ball to during the game against the ASU Sundevils. March 17, 2019 (Casey Paul / CU Independent) 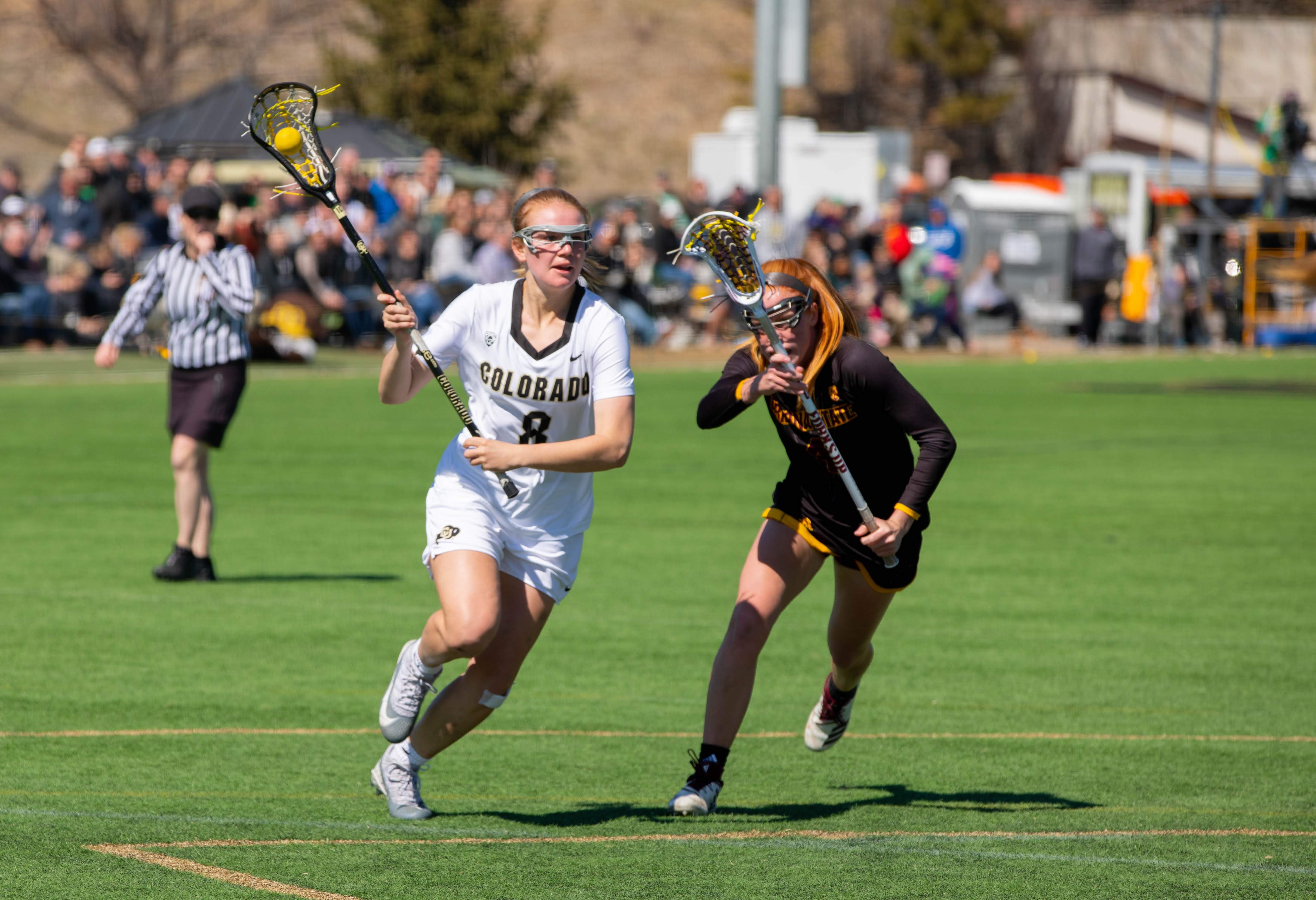 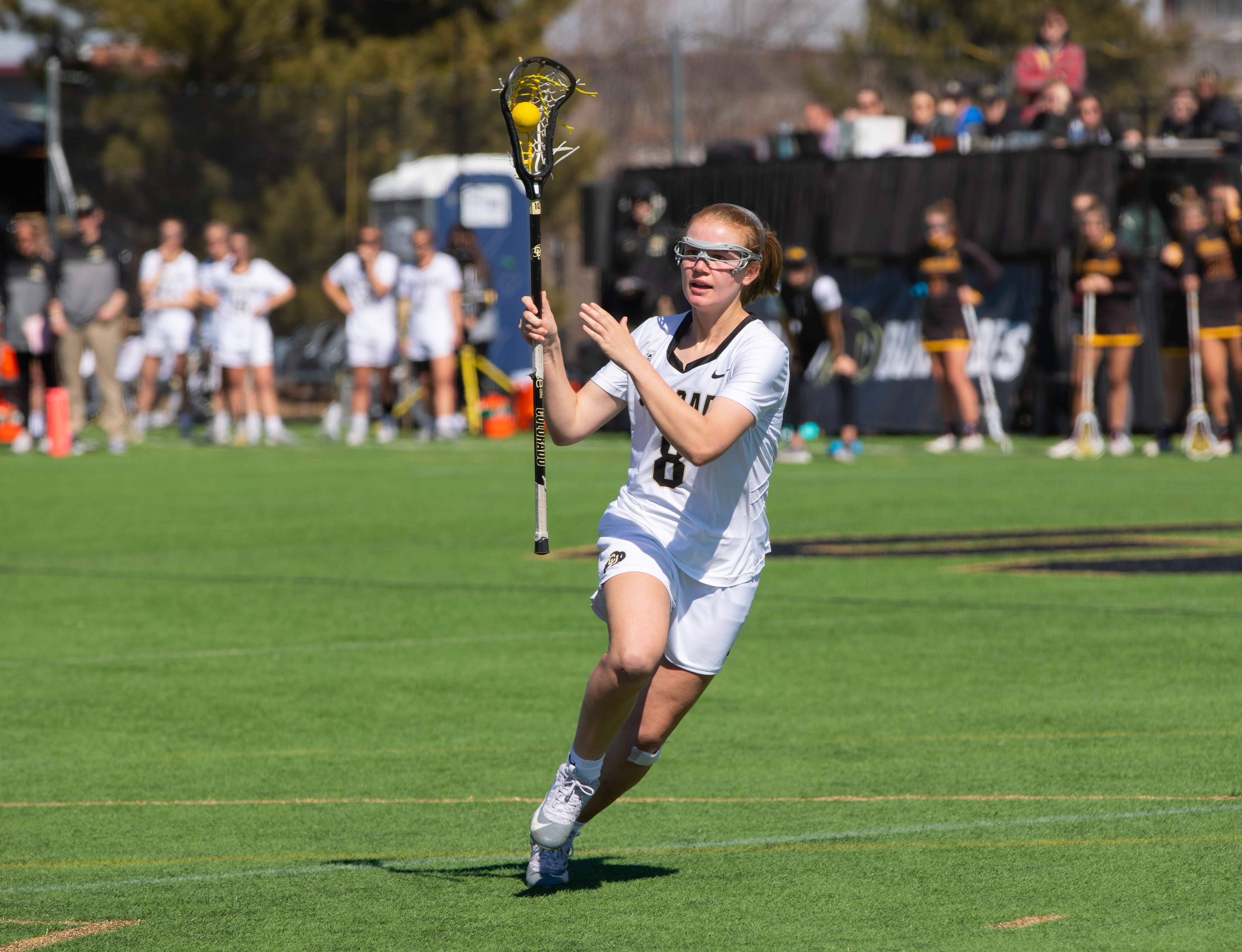 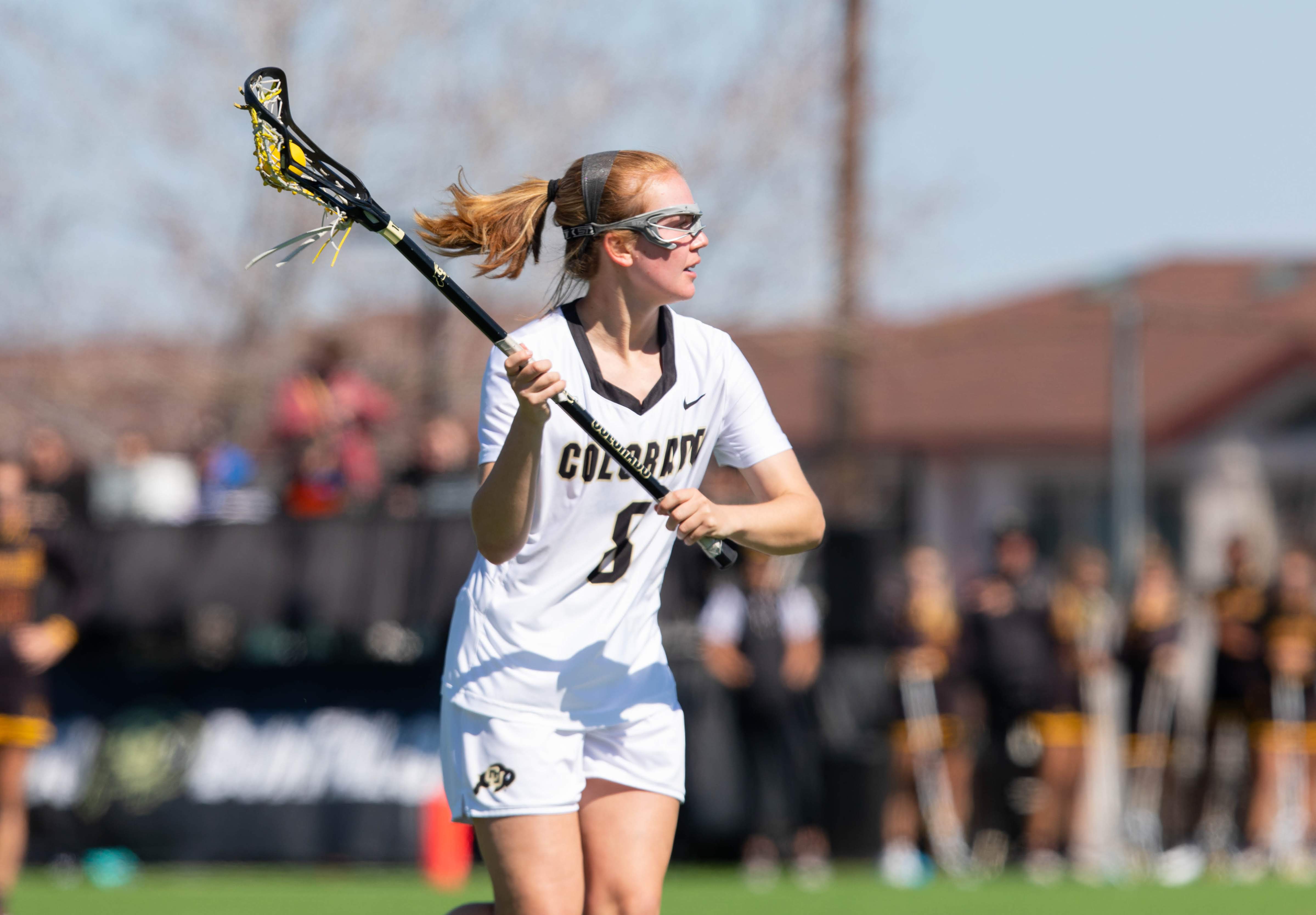 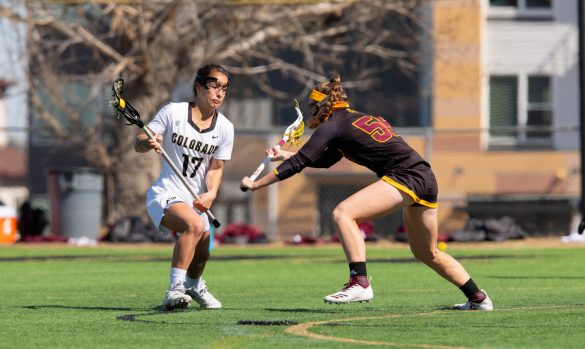 Senior attacker Miranda Stinson tries to get around her opponent, the ASU Sundevils, in order to make another goal. March 17, 2019 (Casey Paul / CU Independent)