Boulder community joins in on global march for climate action

The quiet pedestrian mall of Pearl Street became the center of hundreds of Boulder community members and students marching as part of the global school climate strike on Friday afternoon.

Elementary, middle school, high-school and university students left class, holding signs saying “I care about my future, why don’t you” and “Green 4 all” alongside other Boulder community members as they chanted “What do we want? Climate action!” throughout the streets of Boulder.

The Boulder march was organized by the Climate Reality Project’s University of Colorado, Boulder chapter. The non-profit organization centers around educating and promoting advocacy when it comes to climate issues.

Many young people marching felt that climate change poses a direct threat to their futures. Hailey Lathrop, 17, says she constantly thinks about her future, not just what her first job will be like or how university will go, but what the state of the planet will be.

“I’m hoping to see some change,” Lathrop said. “Like more renewable energy and things that can help save our planet.”

Griffin Roco, a 19-year-old CU student, says change will not happen unless people make a statement.

“I feel like our voices won’t be heard unless there’s some sort of political uproar,” Roco said.

Ryder Hales, an 18-year-old CU student, says the global scope of the strike speaks to the importance of addressing climate change.

“I very much believe in this issue,” Hales said. “Considering that it is a world-wide movement, it’s a great chance to take part to show initiative and real change.”

While the global strike mainly focused on students, many community members were in attendance to show their support for action against climate change. Teresa Mclain stood with her family as her youngest child said she “wanted to help the world.”

Mclain, who works at CU, says she her family started off the morning of the march by watching documentaries on climate change while she, her husband and their children made signs. Mclain wants her children to know that now is the time to start making a difference and that they don’t need to wait until they grow up to voice their opinions.

“They need to sound their voice,” Mclain said. “I think it’s important to teach every kid that they can make a difference, no matter how old they are or what size they are.” 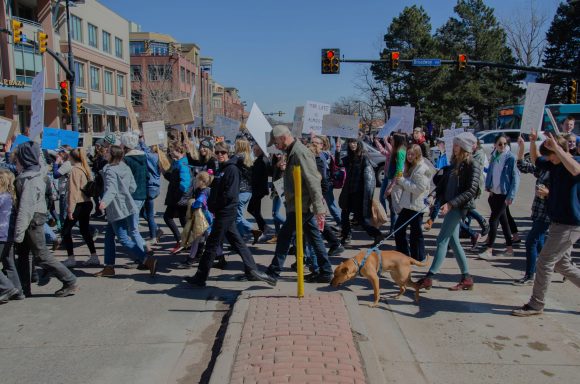 After the march, Mclain says her family will be going through their house to find and remove environmentally damaging products such as palm oil.

“We don’t want it to end here,” Mclain said. “We’re going to do some stuff at home to make sure that we change some things in our diet. [Her children] have learned more today than they have in school about climate change.”

Also in attendance was Joe Neguse, U.S. Representative for Colorado’s second congressional district, who says he came to support the “incredible young people” of Boulder.

“I think you are seeing a plethora of voices across the country that are making it very clear in a very short runway to take significant action to combat climate change,” Neguse said. “So that my daughter’s generation inherits a planet that is perhaps better than the one that we inherited.”

Neguse mentioned the current fight in Congress to pass the Green New Deal, a resolution that was first presented by Congresswoman Alexandria Ocasio-Cortez, which aims to fuel new investments in clean-energy jobs and infrastructure.

The march culminated at the outdoor Boulder Bandshell stage, where event organizers gave speeches about the importance of their cause and highlighted specific changes that they want to see happen.

Speakers hope that CU Boulder will become 100 percent sustainable in its energy resources within the next few years and said this has already been accomplished at schools like Colorado State University and University of Colorado, Denver.

Marchers held signs reading “We Need A Green New Deal” and others which supported Senate Bill 181, which aims to drastically reduce the power of oil and gas companies within Colorado. This bill and other sustainable policies were discussed by state legislators last week during a town hall meeting in Boulder.

Micahel Jacobs, a CU student and member of CU’s Climate Reality Project, took to the stage to energize the crowd and urge attendees not to give up on the fight to address climate change.

“Our planet is choking, our seas are boiling and time is almost up,” Jacobs said. “But what I do need to tell you is that we still have a chance … sure our chances are slim, sure we’re in for one of the most enduring fights in human history, the way I see it, the harder the challenge, the greater the goal. We have the power.” 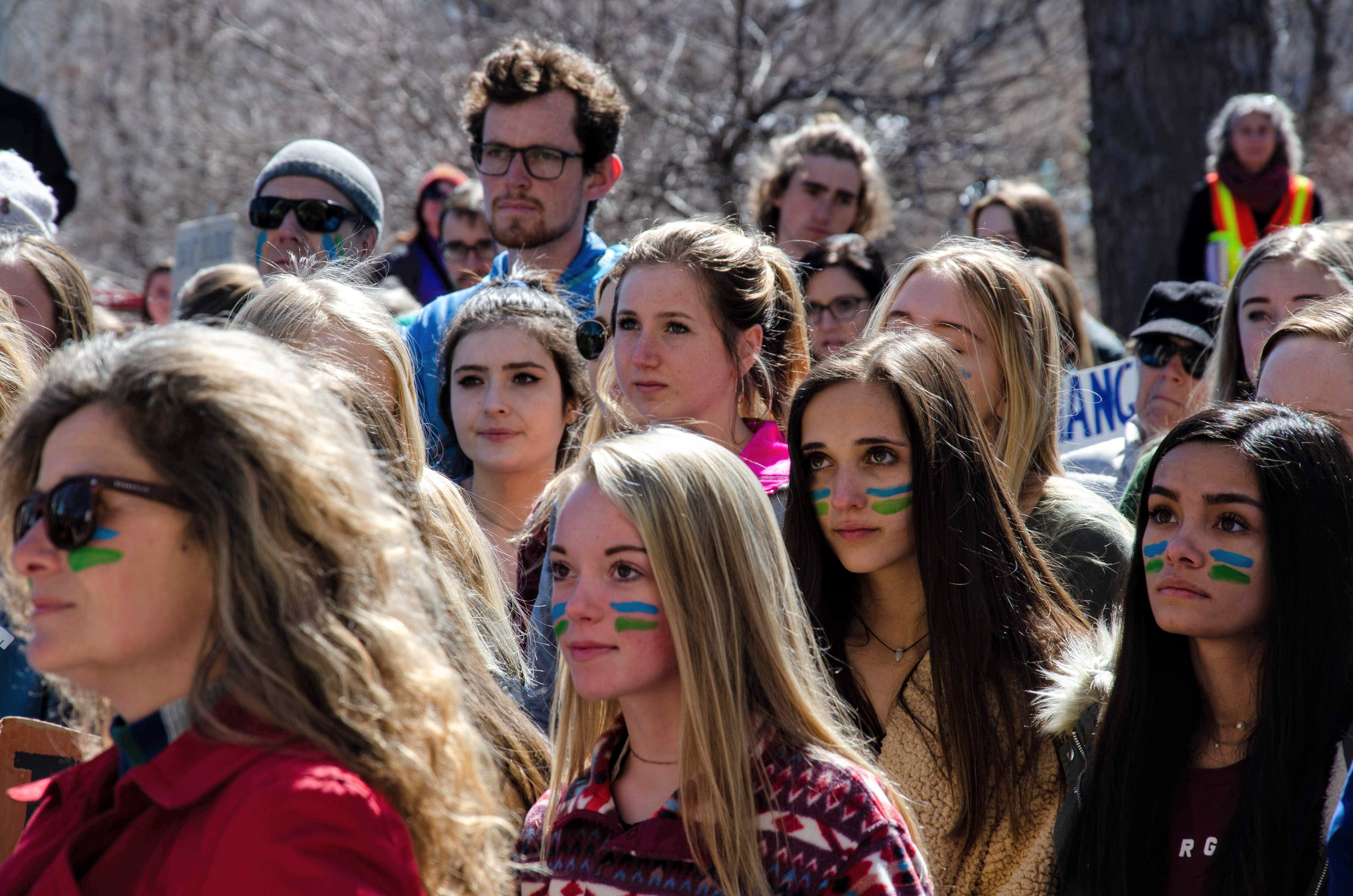 Groups of friends listen carefully about how they can get involved and educated. March 15, 2019 (Hunter Allen/CU Independent) 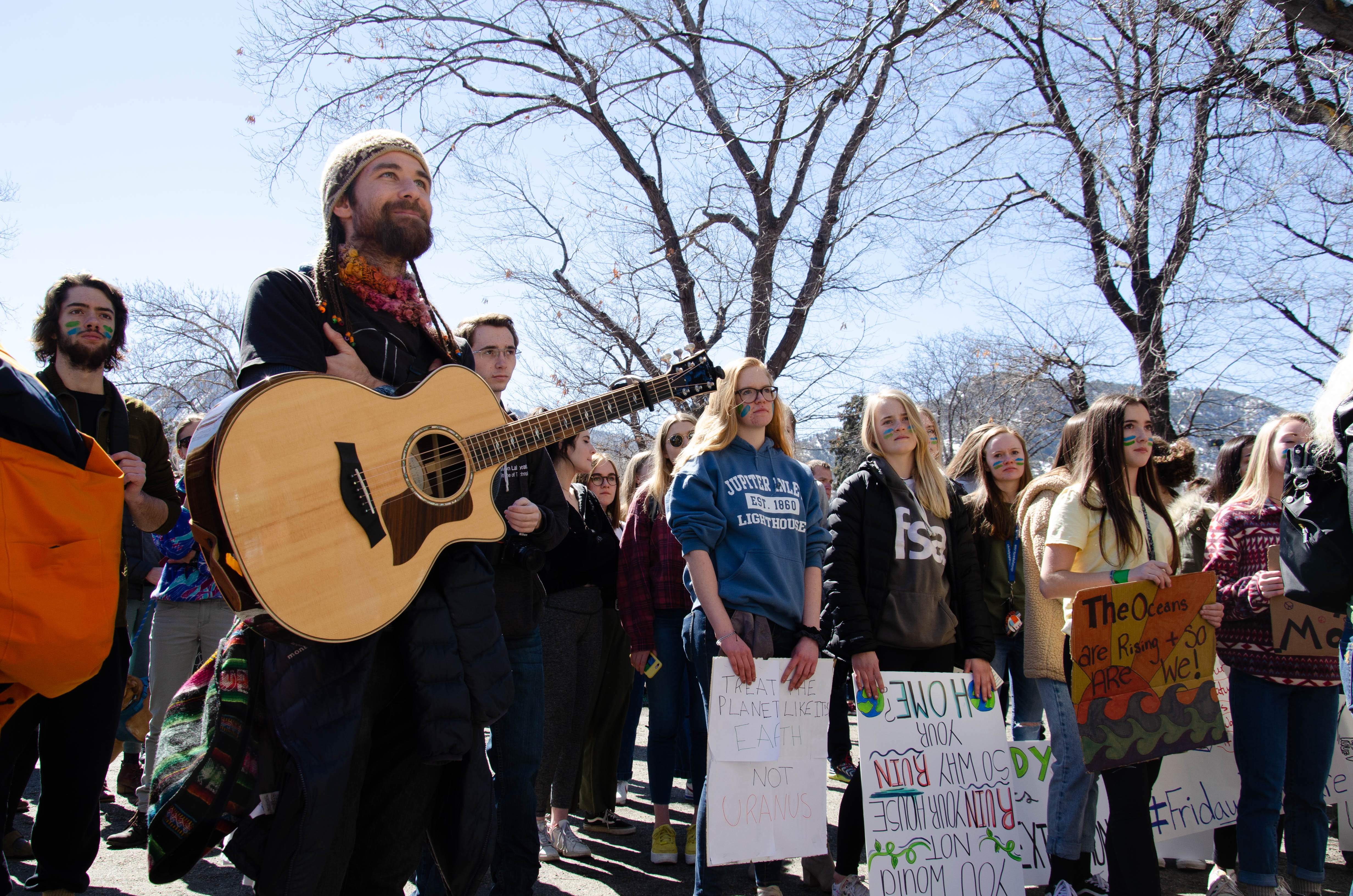