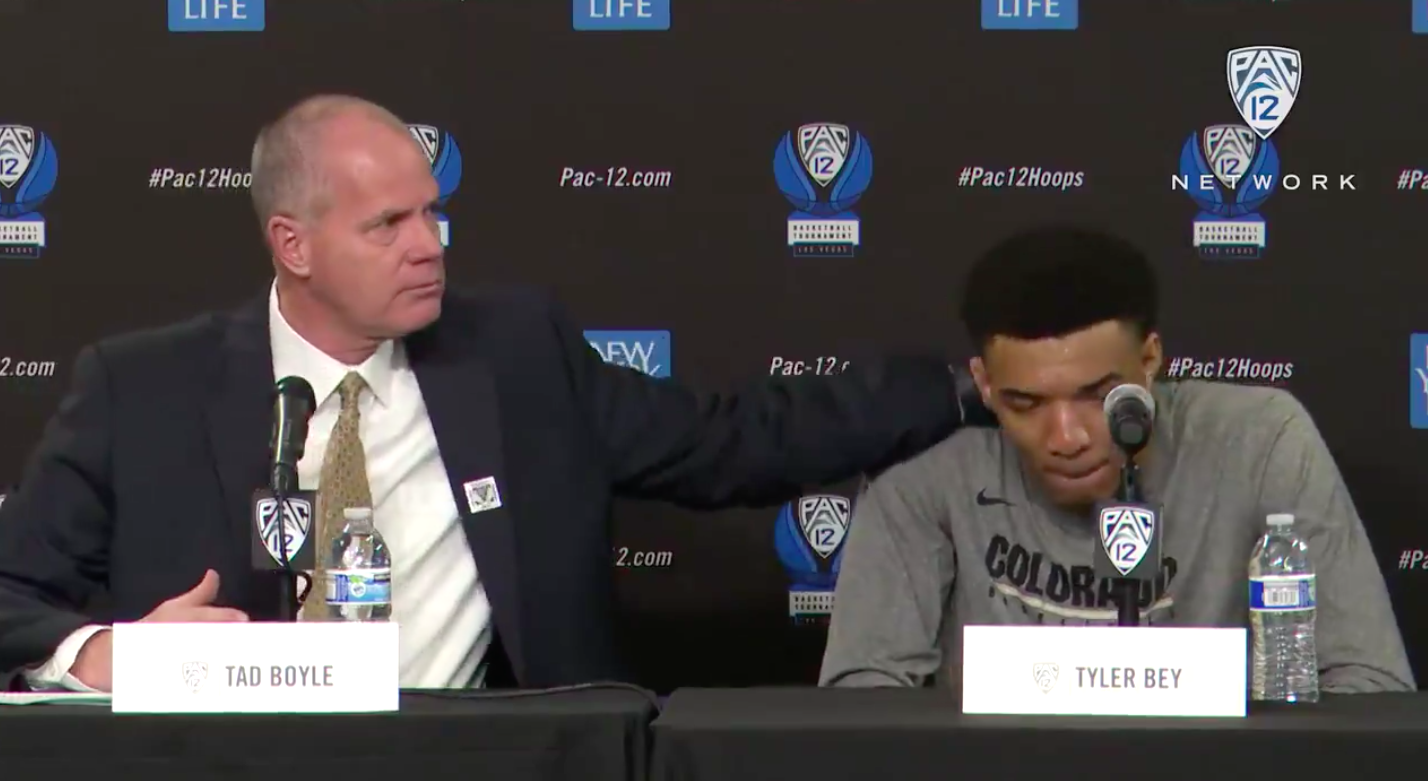 I’ll admit it. During the Colorado Buffaloes’ semifinal loss to the top-seeded Washington Huskies, I broke the first rule of sports journalism etiquette: never cheer in the press area. And to be quite honest with you, I was a repeat offender throughout the entirety of the game. For better and for worse.

When Colorado cruised out of the gate with a 7-0 lead, forcing Huskies head coach Mike Hopkins to take a timeout just under two minutes after the opening tip-off, I visibly fist pumped. When junior forward Lucas Siewert hit a three-pointer to close out the first half by putting Colorado on top 33-27, I howled out an audible — though not too loud or emphatic — ‘yes!’ And with that, of course, came the accompanying signature fist pump that my press box peers had unfortunately came to know me by at the buzzer of the halftime horn.

By the 14-minute mark of the second half, it had appeared that the sports journalism gods had punished me for my malpractice. At that point, the Buffaloes had blown their six point-halftime lead and the score now read 43-35 in favor of the Huskies. Woof.

That was part of a larger 10-point scoring run that Washington was enjoying at the time, which was part of an even larger 25-5 run that extended to the the 8:57 mark of the second half. By that time, the Huskies had their largest lead of the game, a 14-point differential. The score read 52-38 in favor of the Huskies. Woof woof.

Now, I was quiet. In fact, I wouldn’t cheer for the remainder of the game. You win, sports journalism gods. And so did the Washington Huskies.

On my computer there were many tabs open during the game. One tab was the draft of this document you’re undoubtedly enjoying right now. The next tab: Twitter. The next: the live statistical broadcast of the game. The last tab: Google Flights, so I could book my trip back home to Boulder on Saturday, rather than enjoy the sinful splendors of the Vegas Strip one last night following the Pac-12 championship game, which in my mind Colorado was going to win.

When the final horn sounded and the final score read 66-61 in favor of Washington, I closed the tabs and my laptop and packed my things. I made my way to the press conference room early to observe the Washington winners. Initially, still shell-shocked and saddened by the Buffs bowing out of the tourney, I stood in the back while the Huskies head coach praised his senior stud in Matisse Thybulle, who despite fouling out of the game with a few minutes left, still sacked CU with 12 points and a team-high three blocks.

Bitter, I listened as coach Hopkins delivered his opening statement as he praised Thybulle, and biasedly and emphatically cast his vote for his senior Naismith Defensive Player of the Year award finalist.

“When you’ve got the National Defensive Player of the Year — who, he should win it — it changes things,” Hopkins droned on. “And our guys battled. We played better defense, held them to 20 percent from the field, 12 from the three-point line. That’s why we win.”

At this point, my eyes were well-rolled and my teeth were gritted, as my bias — which first started with my cheering in the press area, to now subtly showing my disgust towards the winning team in the back of the presser — still continued to show.

But then, as my cheering had changed earlier during the game, Hopkins’, too, switched his tone.

Hopkins helped me realize something about sports. There will always be winners and losers, triumph and tribulation, domination and defeat. There will also be bias, as I displayed throughout the night, and as the Huskies head coach had done towards Thybulle in his opening remarks. It’s human nature. At the end of the day, enjoy sport for what it is: a game; and for what it is not: a happy ending for all.

By the time Washington’s coach and players were ushered off the press conference stage, and Colorado head coach Tad Boyle and sophomores Tyler Bey and D’Shawn Schwartz were welcomed in, I had settled into a seat in the second row of the press room.

Boyle, Bey and Schwartz were all about to teach me another lesson about sport. It is this: it’s not about the outcome, i.e., winning and losing, it’s about the journey and the growth on the way to that final outcome. Whether your team won or not.

“I think something that’s been kind of a staple of this team has been how much we love each other,” he said. “I mean we say to each other every day. There’s something special between these guys. And the more we can play together, I think we’ll be happy to do it because we all love each other and enjoy playing with each other on and off the court.”

Of the three Buffaloes representatives sitting on the stage in front the of their respective microphones, it was Bey, in particular, who appeared the most miserable. Despite putting up a team-high 22 points and 16 rebounds in front of his hometown crowd, his best performance of the tournament, the Las Vegas native was slouched over, almost appearing as if to hide behind his microphone.

Choked up, Bey barely muttered an audible answer before retreating behind his long-sleeve “Colorado Basketball” shirt, wiping away his developing tears.

And before the moderator ended Colorado’s final Pac-12 Tournament press conference, Boyle got one last uplifting word in.

“We talk about character all the time,” Boyle began. “And I’d just like to comment on Tyler. A true sign of a high-character guy is a guy who is more happy for the team when they win and he doesn’t play well than feeling good about himself when he does play well.”

Boyle’s eyes, too, began to well-up with emotion as his voice began to crack.

“He played his heart out tonight. And he’s as down as anybody on our team, and that’s a true sign of character,” said Boyle in conclusion, with a hand on Bey’s back, embracing and comforting his somber sophomore.

See, sport is not about winning or losing, but rather, much like life, it’s about the connections you make. An emotional Boyle, I’m sure, made an impression on Bey and Schwartz and this entire team for that matter. Both in that postgame press conference and all throughout the season. He certainly made one on me.

And that deserves a cheer — whether it’s considered appropriate or not.