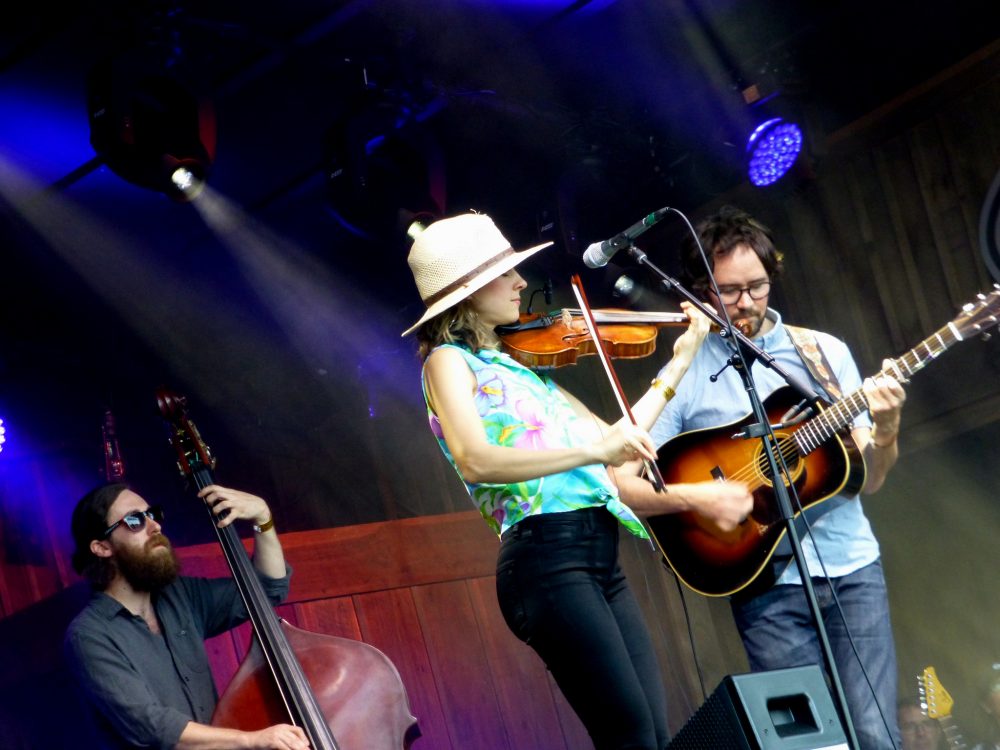 The Boulder Theater was packed Friday night, March 16, with fans eager to hear the sweet acoustics of Mandolin Orange. The folksy Americana duo performed to a sold-out show to promote their new album, “Tides of a Teardrop,” released Feb. 1, 2019.

Acoustic guitarists and vocalists Martha Scanlan and Jon Neufeld opened the show with hypnotic harmonies and captivating melodies. When they came to stage, some audience members murmured, “Oh, it’s just the opener.”

But as soon as Scanlan began to sing, the audience was enthralled. She and Neufeld’s fingers moved quickly across the strings, giving two guitars the power of a full orchestra. Scanlan’s airy timbre had the audience listening intently to pick up the lyrics which were focused on nature and the American West.

Fans cheered Mandolin Orange to the stage where they preformed a set heavy with songs from “Tides of a Teardrop.” The most somber songs featured Emily Frantz’s violin, crying soft and high notes. Frantz joined mandolinist and lyricist Andrew Marlin in beautiful pitch-perfect harmonies in all of their songs. Each musician alternated between their primary instrument and acoustic guitar, joining voices in every song.

The performances that offered an intimate feeling had only the two performers, but other collaborative songs featured an electric guitar and a steady rythm section comprised of upright bass and percussion.

The album has some upbeat sounding tunes with sweet and quick mandolin parts including “Like You Used To,” “Lonely All the Time” and “Suspended in Heaven.” Even these songs, under the facade of cheery strings, are heartbreaking. The lyrics tell of lost love, death and loneliness.

One audience member dared Marlin to make him cry, to which he quickly replied. “I’ll do my best, motherfucker,” Marlin said.

He responded by performing “Late September” a song about his mother’s recent passing. The song begins with a bright mandolin riff but when Marlin breaks in with his steady southern drawl the tone changes. His cheery strumming should sharply contrast lyrics of hospital rooms and tears but the elements combine to create a stunning portrait of a son’s love. The audience swayed to and fro in blissful uncertainty of what emotion to feel.

Marlin introduced another song inspired by death, “Mother Deer,” by telling the story of a doe living on their property. Two days in a row Marlin saw her without her two young fawns. Assuming the worst, he wrote this sad song, from the perpective of a fawn dead on the side of the road. Fortunately for all involved, the fawns appeared free of harm the next day and the folk music world gained a work of beauty.

To keeps spirits up, the duo interrupted the heartbreak songs with a song inspired by their opener, Martha Scanlan, and her guitar style. Their band accompanied them, all the musicians gathered in a tight circled and got everyone smiling dancing with “Old Ties and Companions.”

As the concert came to a close, the packed theater would not let the musicians leave without an encore.

“We didn’t quite throw it all down yet,” Falk admitted.

So the duo and their band returned to the stage, energizing the audience with fast-paced, upbeat “Hard Travelin’.” The night came to a close with a final slow jam, “Waltz About Whiskey.” Listeners embraced their partners and swayed in synchrony.

Mandolin Orange provided an emotional Friday night performance. Listening to their new album, it can be painful to process the lyrics but the reward is gorgeous. If you’re looking to get in tough with your emotions, give “Tides of a Teardrop a Listen.”