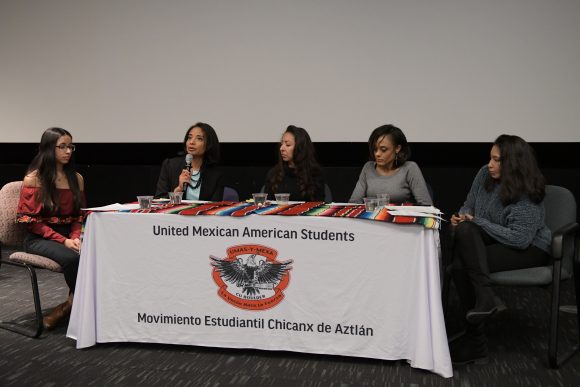 Denver mayoral candidate Lisa Calderón introduces herself at the start of the women of color panel. March 14, 2019. (Vyla Carter/CU Independent)

All three discussed the role that activism played in their lives and in their careers, with Epps saying “being a woman of color means that I am highly visible, and when you speak up you become a target.”

“The options are to resist or not and I chose to resist,” said Epps, who served as a public defender dedicated to bailing low-income people and people of color out of jail.

Her first activist experience was at four-years-old, when she, alongside her mother, protested eating grapes in order to support exploited migrant farm workers. She remembers not fully understanding the protest circumstances, even being frustrated that she couldn’t eat the grapes. But her mother told her “there was blood on them.”

“People were essentially suffering in the fields to put food on our table,” Epps said. “When other people are suffering, even if we have a little, there’s always someone else who has less and we have to then stand up and resist in any way that we can.”

She recalled her mother’s efforts to climb up a Kappa Sigma fraternity house at Wake Forest University in North Carolina to remove a Confederate flag, which she later burned.

“I aspire to that level of liberation,” Epps said.

CdeBaca echoed these sentiments, saying she was politicized to focus on education policy and that solutions to the country’s biggest problems are “sitting on a shelf.”

“We don’t have legislators who are bold enough to carry the right solutions,” CdeBaca said. “I see a need and I was taught to step up when I see that need.”

For Calderón, she looks to other women of color for her inspiration in activism.

“Everyday we’re having our voices dismissed, our presence dismissed,” Calderón said. “Because I see so many phenomenal women who have transformed communities … I was compelled to go into community activism.”

Calderón believes that society has a long way to go when it comes to achieving “women’s liberation”. For her, liberation is defined as being able to lay in bed and feel safe as a survivor of assault, being able to run as a political candidate without physical objectification and being valued for your work as a woman.

“That’s liberation for me … we have not arrived,” Calderón said. “I think it’s not only important to look at the ways we still have to overcome gendered oppression, but also the ways in which we are victorious on a daily basis.”

The talk turned to the women’s experiences in university, something that was not easy for CdeBaca.

“I never felt like college was a welcome space for me as a woman, as a woman of color, as someone coming from poverty,” CdeBaca. “I always felt nervous walking on campus at night and that was weird for me.”

When she began teaching as an instructor at the University of Denver, CdeBaca started a four year “wrap around” program to connect students with services for a variety of issues that she didn’t see being supported. CdeBaca urged for support systems to be put in place even before children reach higher education.

“Stand with other women,” CdeBaca said. “We’re pitted against each other on purpose, in school, in the world, and that is a product of patriarchy.”

Calderón said she remembered a white professor tell her that she wasn’t “graduate school material” despite her having a masters of education in law.

“Even when you have earned your way into the academic space, you still have people who are doubting your ability … but thank goodness I had other folks who said ‘you know what, you claim that space’,” Calderón said. “You need to know who you are.”

Following the event, sophomore Rosa Ramirez said that she resonated most with seeing three women of color.

“I think in my four semesters [at CU], I’ve never had a professor of color,” Ramirez. “So being able to see these three who are successful and look like me, it reminded me that being at a predominantly white institution doesn’t mean that I can’t do as well as the white people in front of me.”

Senior Amairany Casillas, an event organizer and member of UMAS y MEXA, said she hopes to increase awareness of events like Semana de la Muxer in the future. One area that deserves more attention is a need to include transgender women.

The week-long event has grown in reputation in the four years since Casillas has been involved with it and she said she’s happy to have the chance to bring out “powerful women in the community.”

“I’m hoping to see it grow even larger than what it’s been,” Casillas said.