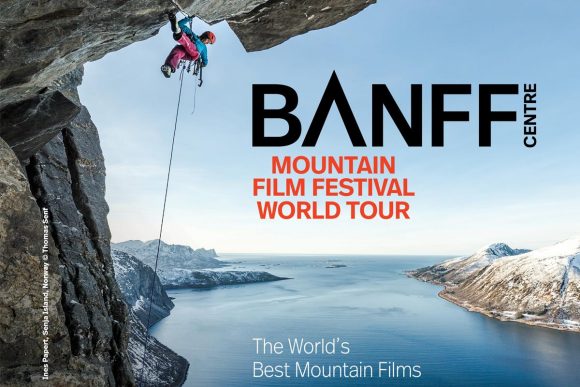 When the Banff Mountain Film Festival World Tour landed in Boulder this past month, I did not know how much it would change my perspective on life. I already considered myself a relatively “deep” person, but I had no idea that a couple of short films could really move someone so much. I left the festival with a much a greater appreciation for all of the incredible perks that life has to offer and a mentality to never take them for granted again.

While huddled together in a theater, people are packed shoulder to shoulder with locals who look like they could have directed the films themselves. A giant screen is in front of all of them, waiting to display the next few hours of brilliant cinematography. You may be confused upon your first time attending a Banff Mountain Film Festival. Why is everyone wearing Patagonia? Where are the snobby film critiques? Why does everyone seem to know every kind of rock climbing terminology? All of those questions are easily answered once you’ve sat through the next two hours of beautifully crafted short films about mountain life, extreme sports and the environment.

The annual festival is made for a specific audience, one that deeply and fiercely loves the joy of being alive. Each film, whether it is three minutes or 30 minutes, invites us to remember what it means to test the limits of human strength and it reminds us of why we cross oceans, hike mountains, climb peaks and live fully.

The 2019 Banff Mountain Film Festival was featured in the Boulder Theater this past year, where my friend Pia and I stood outside of the doors, asking every other person for an extra ticket. We had no plan, about $20 in cash in our pockets and a stubborn mentality that we were not going to leave until we each had a ticket. Person after person walked right by us through the doors, never giving a second look to the two girls rummaging through their pockets for extra cash to offer. A man with kind eyes and laugh lines around his mouth stopped mid-step and looked over at us. He extended his arm and told us that he had an extra ticket, when all of a sudden another woman, with two young boys clung to her side, turned to offer us a ticket as well. Pia and I looked at each other, smiles and all, and handed the two the last of whatever cash we had in exchange for the tickets.

The Banff experience was like no other when it comes to film festivals. The films that make it into the festival are more than just sophisticated, well-shot, high-quality productions. They’re enticing works of emotion and art that transcend the audience into a world where even the wildest dreams are beautifully executed through a camera lens. Whether it is a profile on a woman who lives to trap and relocate beavers in Colorado or a story following a 60-year-old woman and her daughter who undergo a six-month trek across the coastal mountains in British Columbia, the annual Banff film collection is nothing short of awe-inspiring. Perhaps it’s because each film adds a reassurance that there really is something bigger than us out there, something that we all are trying to find. Maybe it’s hope, love, a thrill, or simply happiness that each one of us could use a little more of in our own lives.

For some of us, they find it in the crevice of a slab of granite on a mountain in Yosemite, or in the feeling of tearing up a blanket of snow covering the backcountry of Jackson Hole. Wherever it may be, Banff reminds us that our greatest journeys in life do not need to be at the tops of mountains or at the thresholds of human endurance. Rather, our greatest journeys occur when we discover what makes our hearts beat a little quicker, our palms sweat a little more and our minds race a little faster.

I once read that to be alive is a very rare thing; most people just exist. One of the short films, “The Frenchy”, follows an 82-year-old French man who competitively races in downhill mountain biking and skiing. In the middle of the film, he said, “The fountain of youth don’t exist,” but “the main thing is never give up. Don’t give up.”

The recurring theme that seemed to be prevalent in this year’s festival is that even the most impossible things can be done. Our days here on Earth are numbered, there is no doubt about that. None of us are getting any younger. “The Frenchy” is right, there is no fountain of youth, but there is a world out there asking to be seen before it’s too late.

The Banff Mountain Film Festival experience is more than satisfaction for film buff cravings. It is an invitation to remember what it feels like to be alive, to hear your heart pounding in your ears and quite literally, to feel on top of the world. When the last film rolled its credits, and the lights flicked back on again in the Boulder Theater, I got up out of my seat and wiped a tear that had suddenly rolled down my cheek. I wasn’t sad. I was inspired and filled with so much gratitude and fulfillment in knowing that the human experience can be a pretty incredible thing.

Now I wasn’t going to go out and buy a ridiculously expensive camera so I could have someone film myself hiking the Swiss Alps or anything like that, but I was going to remember that achieving greatness isn’t as complicated as everyone thinks it is. Just don’t give up.