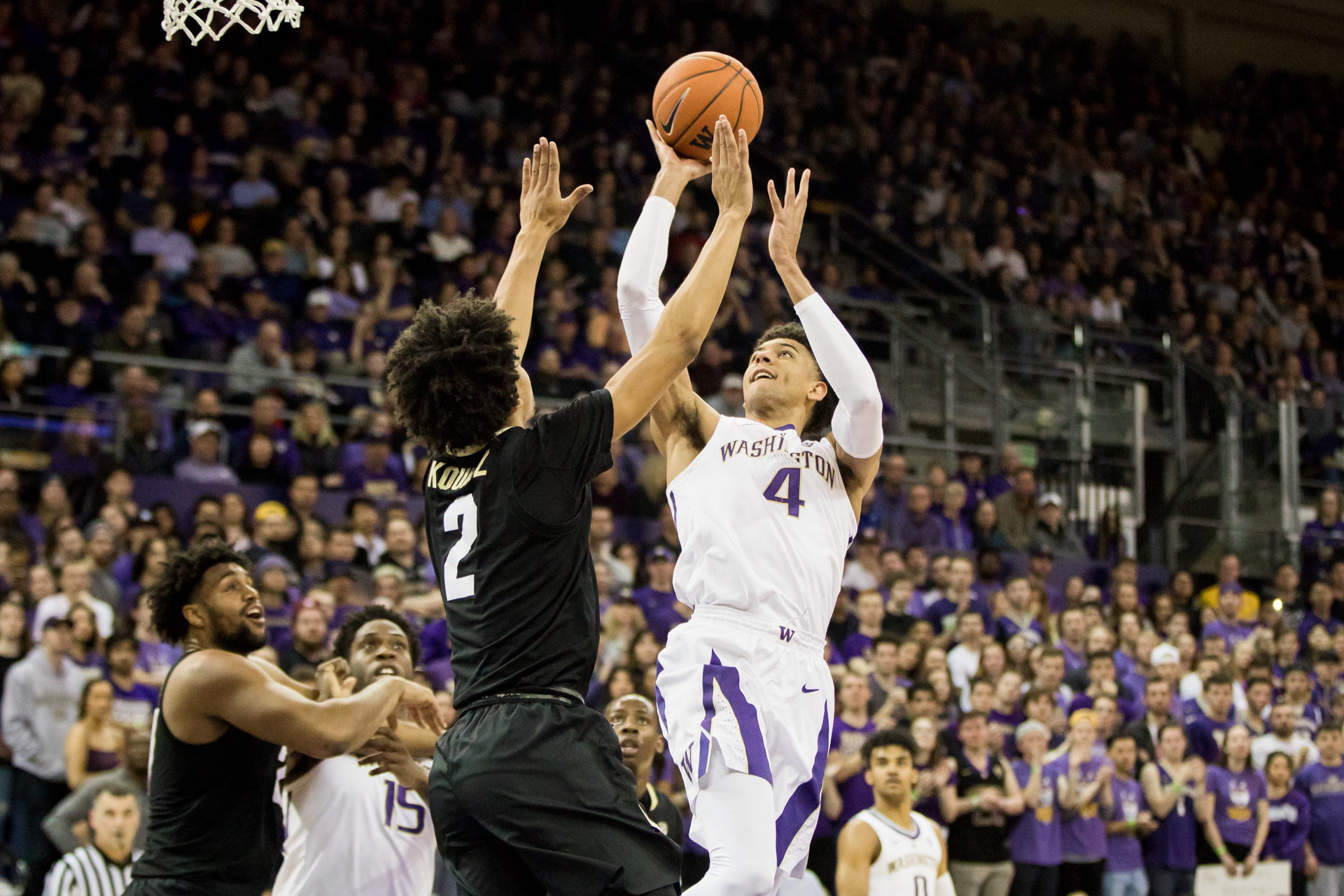 Senior forward Matisse Thybulle goes up for a layup on Feb. 23 versus Colorado. Thybulle led Washington in scoring with 17 points and accompanied that with six steals in the 64-55 win over the Buffs. (Jaya Harrell / The Daily)

It’s Thursday, March 14, 3:02 p.m. PST at T-Mobile Arena in Las Vegas, Nevada. The Colorado Buffaloes are off to a fast start in their quarterfinal matchup against the Oregon State Beavers. It’s 20-8 before junior guard Shane Gatling hits a three-point shot to extend CU’s lead to 23-8.

Fresh off their 78-75 win over the USC Trojans that happened just an hour before Gatling hits his three-point shot to give the Buffs a 15-point advantage over the Beavs, Washington Huskies senior star Matisse Thybulle emerges from the Huskies’ locker room and sits just a few feet away from me, courtside on the Buffaloes’ defensive baseline.

Excluding the what appeared to be a team staff member who accompanied him, Thybulle was alone — watching, scouting, planning his attack against his next opponent. While many of his teammates were more than likely eating their postgame meals in the locker room, the Naismith Defensive Player of the Year award finalist brought his meal out and ate it courtside.

After a layup by sophomore forward Alexander Strating, Gatling galvanized the Beavers’ bench into a timeout when he hit another three-pointer to extend Colorado’s lead to 20, forcing a timeout by OSU head coach Wayne Tinkle with 6:55 to go in the first half. Gatling’s three was part of a five-minute, 13-0 scoring run by the Buffaloes.

No doubt the defensively adept Thybulle was taking mental notes of the Buffs’ big offense.

Thybulle takes time between bites to high five a young Huskies fan who passes by and notices the Washington senior and impersonates his impressive windmill dunk at the end of the Huskies game, a dunk that would appear on ESPN for the remainder of the night as the No. 2 play on the SportsCenter’s Top-10 plays of the day.

The two-time defending Pac-12 Defensive Player of the Year stayed for the entirety of the Buffaloes’ 73-58 quarterfinal victory over the Beavers. While Colorado’s defense proved to be a bit porous at times — the Buffs watched a 21-point lead dissipate to six points in the second half — there was still plenty for Thybulle to take notes on, probably most notably, the depth of CU’s roster.

With five different Buffaloes hitting double-digit scoring, and none of them named Tyler Bey, Thybulle will have plenty to defend during Friday night’s semifinals showdown. Though, yes, the Buffs have proven over their first two Pac-12 Tournament games that they don’t need Bey at his best, an improvement from the Pac-12’s Most Improved Player recipient would certainly help Colorado’s odds at usurping the top-seeded Huskies.

Bey knows he hasn’t been at his best.

“Well, I’m just happy we got the [win and] I’m glad we get to play [on Friday],” said the sophomore guard. “Tomorrow’s a new day and I’m just going to move on and treat this day like we won.”

When I asked the Buffs’ arguably best defender on the team if he’d take it upon himself to guard Thybulle on Friday, he preferred not to show his hand in the Vegas locker room.

“I don’t know what coach is going to have or what we’re going to scout,” Bey said, keeping his cards close to his chest. “…We’re just going to play as a team and everyone is going to guard their individual and lock up.”

Junior forward Lucas Siewert is another big important defensive talent on Colorado’s roster. Siewert expanded on Thybulle’s game, and gave me a scouting report of what he expects to see, and has seen twice already this season, on Friday.

“We know what we have to do. We’ve played against them twice,” he said. “We just [have] to take care of the ball. [Thybulle] is a really good defender. We just got to read where he’s at and make the play. We’re going to be ready.”

When I probed the junior guard for more on how he would shut down Thybulle, he obliged.

Sitting directly in the stall next to Siewert in the Buffaloes’ small locker room in T-Mobile Arena was Gatling. He, too, provided a quick scouting report of his own of Thybulle and the Huskies zone defense.

“We know he likes to go for steals and blocks so we got to play with two feet, pump fake, pass fake through their zone,” said Gatling of the country’s leading ball-stealer (3.55 average per game) and the nation’s top-20 blocker. “They’re going to play zone for 40 minutes. Pass fakes — he goes for a lot of pass fakes. We just got to make the right plays against him.”

The Buffaloes will certainly need to make the right plays against such a dangerous defensive threat. This will also certainly come down to a lower-scoring defensive battle, as Washington’s offense has been pretty stagnant throughout the regular season. The Huskies own the Pac-12’s third-lowest points-per-game average with 70.6 coming into the tournament.

Colorado’s defense, on the other hand, is playing some of its best basketball during the tournament. The Buffs held Oregon State to a season-low 34 percent make rate through the game and a season-low 58 points scored. The Buffaloes boast the tourney’s second-best scoring defense, holding teams to an average of 54.5 points per game, the second-best field goal defense (34 percent) and the second-best three-point defense (27.5 percent). CU is also the tournament’s leading rebound team, both offensively and defensively.

The Buffs will need every bit of their defense from here on out. The team, however, appears to be hitting its stride at the right time in this tournament.

“We’re feeling pretty good,” said Siewert. “We didn’t play our best [against Cal], but I think we took a big step forward [against Oregon State] and we’re ready for tomorrow. [Washington] got us both games during the regular season but we’re ready for a challenge and it’s going to be tough.”

We know Thybulle has his scouting report ready. Let’s hope the Buffs do too.

Colorado tips off against No. 1-ranked Washington in the Pac-12 semifinals on Friday at 7 p.m. MST.