Depth, defense on display as Colorado cruises past Oregon State 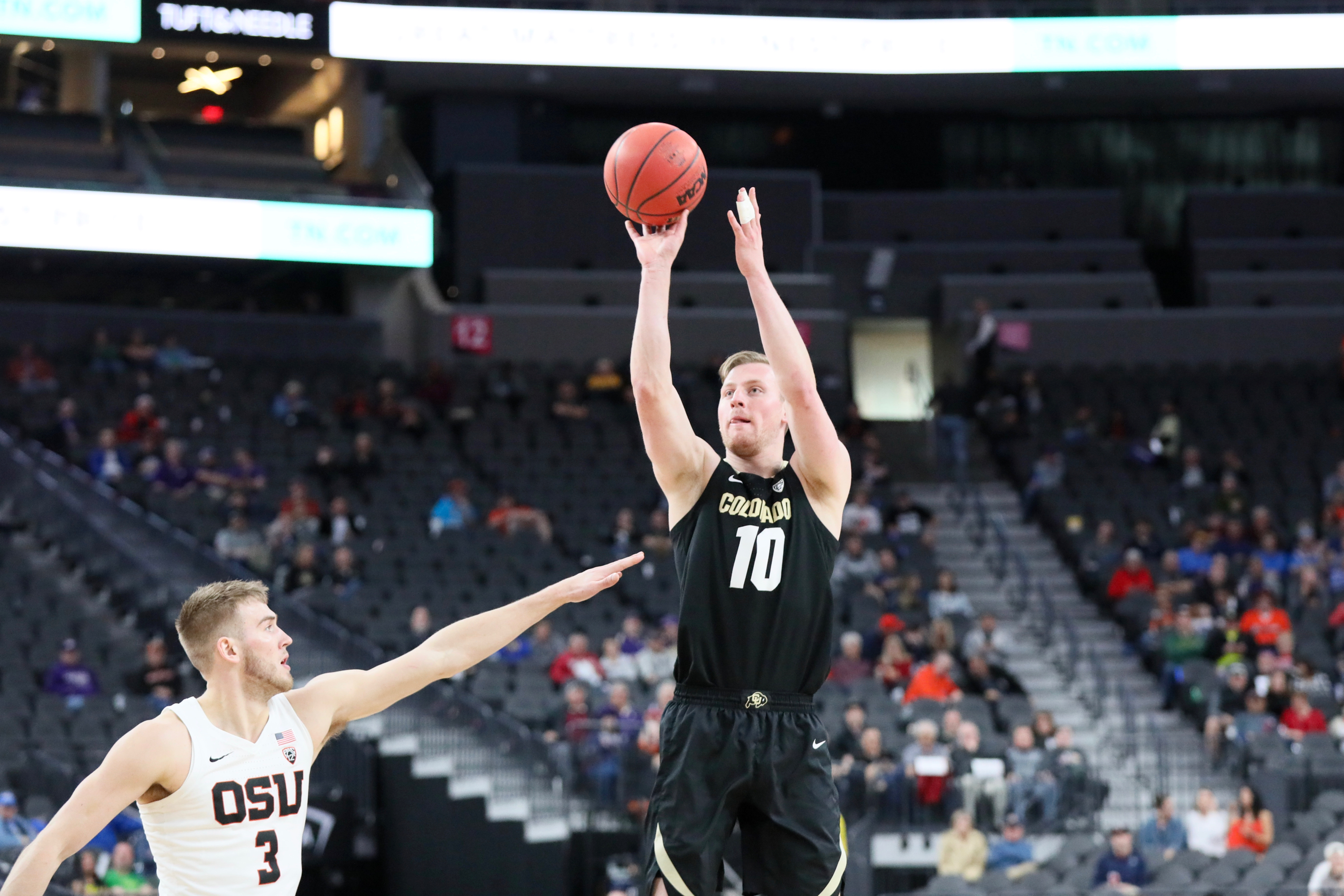 Sophomore forward Alex Strating shoots the ball during the second half of play at T-Mobile Arena. March 14, 2019 (Nigel Amstock/CU Independent)

Entering the Pac-12 Conference Tournament in Las Vegas, the Colorado Buffaloes were getting their best basketball from sophomore guard/forward Tyler Bey. The Las Vegas native went into the tourney having recorded a double-double in eight of his last 10 regular season games for the Buffs.

At least through the tournament’s first two games for Colorado, it appears he left his best in Boulder. But basketball is a team game after all, and the Buffaloes put their depth on display in their 73-58 quarterfinal win over the Oregon State Beavers on Thursday.

In total, five different Buffs hit double-digits in scoring. As he did in the team’s first tourney game against Cal, sophomore guard McKinley Wright IV led the charge for the Buffaloes with 17 points. Close behind were two more CU guards in junior Shane Gatling, who scored 15, followed by sophomore D’Shawn Schwartz’s 11.

Perhaps the most surprising of the five Colorado players to record double-digit points was sophomore forward Alexander Strating. The Netherlands native had never recorded more than five points in a game before Thursday’s contest against Oregon State.

Coincidentally, it was the Beavers which were on the receiving end of Strating’s previous best of five earlier this season back in Boulder on Jan. 31.

“I can’t say enough about this guy to my left,” said head coach Tad Boyle, motioning to Strating in his postgame press conference. “[He] didn’t play yesterday and comes in today and gives us big-time minutes. Tyler was in foul trouble. Evan was in foul trouble. So Alex came in, did a great job guarding [Oregon State’s Tres] Tinkle, and it’s a tough matchup…[I’m] really proud of [Strating].”

During the win over Oregon State, Strating symbolized the necessity of the next man up mentality. In a win-or-go-home tournament, a team can’t always rely on its best players, who will more than likely be double-teamed and subsequently shutdown (see: Tyler Bey) by their opponent.

It’s players like Strating who must play their respective best basketball of their lives — or at least try — if a team hopes to make it far.

“It’s not just our five starters, it’s an eight-man rotation,” said Boyle. “It’s truly a team. And what’s nice about a team, is when it’s some guy’s night, maybe Tyler is having struggles, Alex steps up for him, and that’s what teammates do.”

Having more than one or two big-time scorers on a roster is of the utmost importance in just about every team sport. Depth is everything, and the Buffs proved they’ve got plenty of it on Thursday night.

“We’ve got great depth on this team, and we’ve got quality depth,” added Boyle. “Lucas Siewert is really important coming off the bench. Daylen Kountz has had, for a freshman, two games in a row, really big-time minutes in big-time games. And obviously Alex  tonight.”

In addition to Strating’s career-high night, his defensive play impressed his coach, as well.

Strating aside, the team’s defensive depth was particularly impressive, as well. Colorado contained Oregon State to just 18 first-half points, the lowest number the Buffaloes have allowed all season long. This comes after CU held Cal to just 51 points in the opening round of the tourney, tied for the second-fewest points the Buffs have allowed in a game all year.

“I couldn’t be more proud of our guys,” Boyle said. “Our defense, the last two games, has just kind of ratcheted up to another level…we were challenged in a different way tonight then we were yesterday with Cal. Oregon State has got three really, really good players. I can’t say enough about Tres Tinkle and the Thompson brothers, because they’re good players.”

While the defense did allow the aforementioned Tinkle and the two Thompson brothers to double-digit scoring, the Buffs held the other six Oregon State players to seven points or fewer, with four of those six not recording a single point.

Oregon State’s lowly 34 percent from the floor is the team’s lowest average in a game all season long. The Buffs also held the Beavers to their lowest point total of the season (58).

“Our defense has gone to a whole new level,” said Boyle. “[In the] second half they started driving us, and we knew that’s what they were going to do. They put a lot of pressure on you. They put foul pressure on you. And our guys did the best job they could. But [I] couldn’t be more proud.”

The Buffaloes will need all their depth and defensive talent on display tomorrow when they take on the top-seeded Washington Huskies, a team that features senior guard Matisse Thybulle, who himself is pretty defensively adept. Not only is he the two-time defending Pac-12 Defensive Player of the Year, he’s a finalist for the Naismith Defensive Player of the Year award.

Colorado takes on Thybulle and the Huskies in the Pac-12 Tournment semifinals on Friday at 7 p.m. MST.