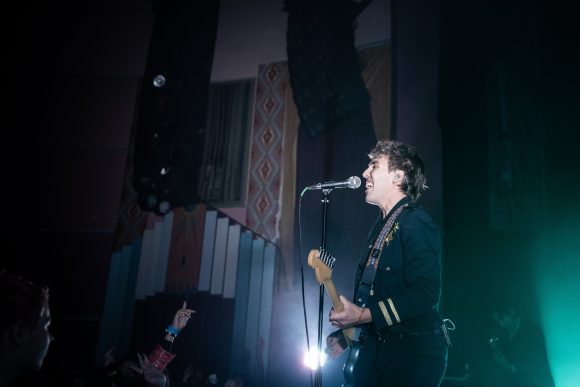 Christo Bowman of Bad Suns during their show at the Boulder Theater on March 8, 2019. (Angela Smith/CU Independent)

Bad Suns turned up the heat in the Boulder Theater on Friday, March 8, in a sold-out show that countered the winter gloom. The group is finishing up their international “Away We Go” tour in anticipation of their upcoming album release, Mystic Truth, at the end of March. Contrary to their use of the same Zia sun symbol from New Mexico’s flag, the group hails from Southern California.

Opening for Bad Suns was new-to-the-scene group Vista Kicks. Opening acts often get lost on the stage or fail to engage the crowd, but the indie rock band had no trouble warming up the audience. Their combination of drums, distorted guitar and melancholic vocals give the group a sound reminiscent of 1960s surf rock, especially with their song “If I Didn’t Have You.” Each of the four members of Vista Kicks had a different disheveled hippie vibe which suited their alternative sound. 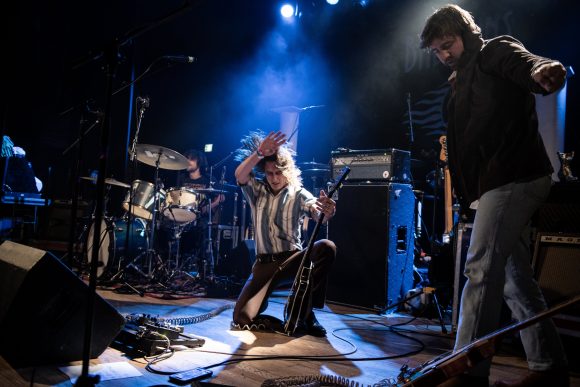 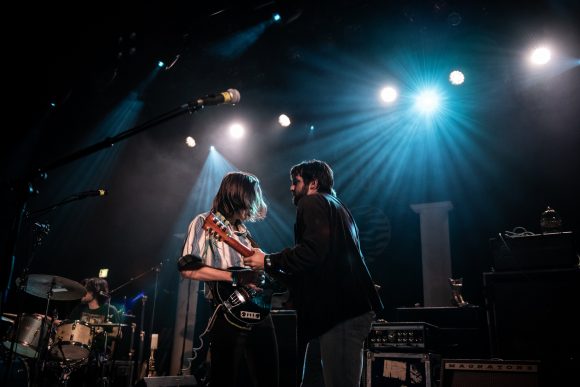 Heavy drums, accentuated guitar and lilting vocals were in abundance during the evening, creating a mesmerizing positivity that radiated through the audience. Bad Suns started their set off appropriately with the tour namesake, “Away We Go,” a single that band members Christo Browman, Ray Libby, Gavin Bennett and Miles Morris released in 2018. 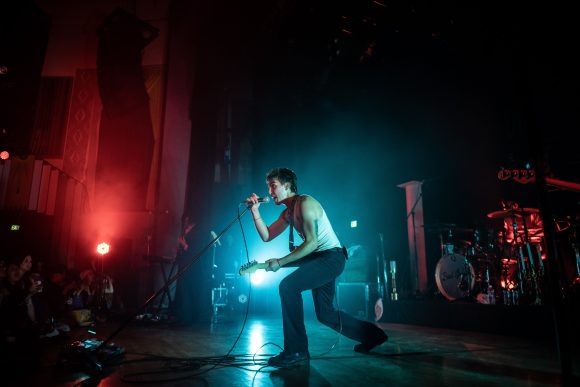 Christo Bowman gets down low during the Boulder show of the Away We Go Tour on March 8, 2019. (Angela Smith/CU Independent)

From there, the band played songs mostly from their most recent album, Disappear Here, with only a few crowd favorites from their first album, Language & Perspective. The audience was receptive to each song and the music was almost hypnotic, encouraging everyone to sway or sing along regardless of their level of familiarity. This effect is emblematic of much of the current music scene: a band of four or so members playing melancholy rock to enthusiastic audiences ranging from mid-teens to early twenties. Yet, in a musical market flooded with groups that fit this description, Bad Suns manages to stand out.

Inspired by Elvis Costello and 1980s post-punk groups like The Cure, lead singer Bowman has made sure that his group stays true to its own sound. Bowman’s use of his impressive vocal range and the group’s devotion to the indie rock genre give Bad Suns an easily recognizable sound. Furthermore, each member’s enthusiasm and stage presence captivates audiences and ensures fan devotion. 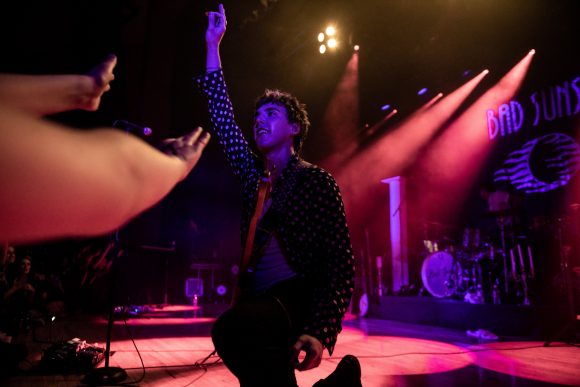 Lead singer Christo Bowman takes a knee at the end of the show on March 8, 2019. (Angela Smith/CU Independent) 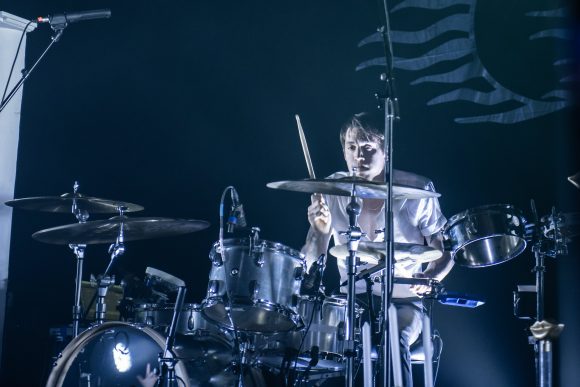 Setting plays a big role in making a concert unique, and Friday night at the Boulder Theater was certainly a unique setting. Snow from the recent storm was still on the ground but a warm spring rain was falling from the sky. The Boulder Theater’s art deco style paired surprisingly well with the surf rock and 80s indie punk rock sound of Vista Kicks and Bad Suns respectively. Altogether, the night was one wild good time for fans of the popular alternative rock scene.

Don’t fret if you missed this unique performance though — after a very short break, the ambitious Bad Suns begin touring again in April and will be back in Denver on May 2. 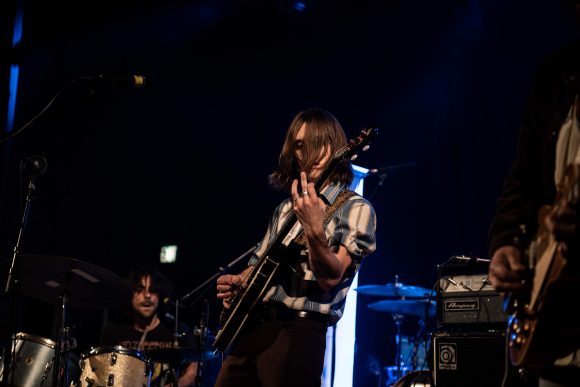 Bassist Trevor Sutton focused during a show at the Boulder Theater on March 8, 2019. (Angela Smith/CU Independent) 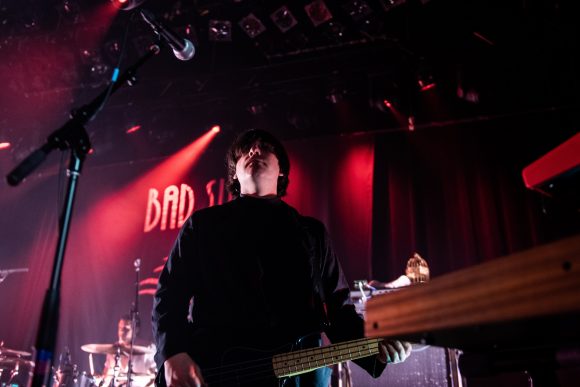 Bassist Gavin Bennett during the Boulder show of the “Away We Go” tour on March 8, 2019. (Angela Smith/CU Independent) 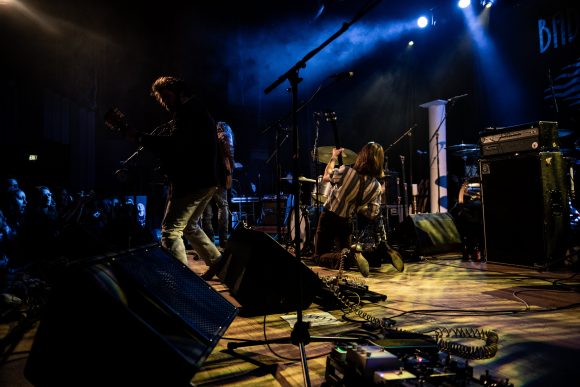 Vista Kicks gives their all in Boulder on March 8, 2019. (Angela Smith/CU Independent) 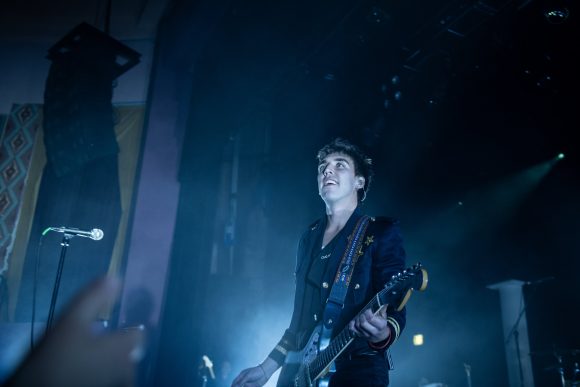