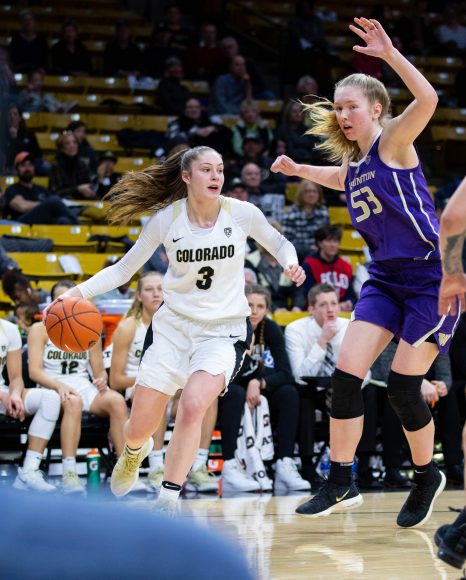 Freshman guard Emma Clarke swerves around her opponent, the UW Huskies, and goes for the basket. Feb. 24, 2019. (Casey Paul/CU Independent)

Colorado Buffaloes women’s basketball freshman guard Emma Clarke grew up in Perth, the capital of Western Australia, and home to more than 1.9 million people. Now thousands of miles and a 24-hour flight away from home, she stars at guard for the Buffaloes in the decidedly smaller hamlet of Boulder, Colorado.

Before arriving at CU, Clarke played basketball for the Perry Lakes Hawks, a team based in Perth. In 2017, she graduated from Basketball Australia’s Centre of Excellence at the Australian institute of Sport in Canberra, Australia. While it’s clear Clarke has a knack for the game of basketball, the game she knows so well has taken some adjusting here in the States.

“It’s a lot faster paced here than we are at home,” said Clarke. “It’s a different adjustment, some of the rules are different, plays are different. We focus on the opponent more than we do ourselves.”

Now, with the regular season coming to a close following the Buffs’ matchup with the Bruins on Sunday, the focus shifts to next season. Clarke, however, took some time to look back on her freshman year with CU, exchanging stories about her favorite moments of the season.

“I would say [my favorite moment was] probably when we beat USC because we hadn’t won a Pac-12 game [yet] and we were still so excited for the game,” Clarke said. “When the buzzer sounded at the end, we were all so happy and jumping around and we got to sing our fight song again, so that was probably the best moment this year.”

Australia played a total of six games in India, finishing with a 4-2 record, good for third place in the tournament. Clarke averaged 6.6 points, 3.8 rebounds and 2.4 assists in the five games she appeared in.

Her first experience playing international basketball came last season at the U17 FIBA Oceania Championships. She led Australia to a gold medal, averaging 18 points, seven rebounds and 4.4 assists per game. Clarke was named to the All-Star 5 at the tournament.

For Clarke, the international competition helped her grow as a player and become more independent.

“[I’ve been] looking after myself, I would say; taping my own ankles, doing my own treatment and recovery,” Clarke added. “Looking out for myself without having to lean on lots of people.”

Throughout this season with Colorado, Clarke’s minutes have gradually increased and with that experience came some increased confidence.

“I came in kind of hesitant at the start…My first non-conference game, I was just shooting the ball, kind of scared to put it on the floor and scared to be aggressive,” Clarke said. “As I’ve been through practices and more games and the help of our seniors and the great coaches we have, they’ve definitely instilled confidence in me and made me believe I can do whatever I set my mind to.”

Clarke’s ability to put the ball on the floor was a key factor in her career high 15-point performance against the Washington Huskies on Feb. 24. She finished the game 6-of-11 from the field.

While that was an impressive individual effort from Clarke, as she’s alluded to, she’s learning how basketball is more of a team game. Lucky for her, she’s had two of the better Buffs in the women’s program history on her team all season long, senior guards Kennedy Leonard and Alexis Robinson.

“They’ve had a really big impact,” Clarke said of the two seniors. “They’ve been really good leaders on and off the court, they’ve been encouraging and telling us to get in the gym and the weight room and really getting after us. We just wanted to try and make it the best season for them.”

Clarke observed the two seniors all season long and she’s learned a thing or two from them. Most notably, it was their impressive work ethic that made the biggest impact on the freshman’s habits both on and off the court.

“They’re really hard workers,” she adds. “Kennedy comes in probably every day to get up shots before practice and after; and Lex (Alexis Robinson) is always in the weight room trying to get stronger. Definitely just hard work and how much a team needs everyone to get along with each other.”

Not only have the two seniors helped Clarke individually, she adds that they helped the cohesiveness as a team and brought everyone closer together in the locker room.

“Our chemistry has definitely gotten a lot better since the start of the season,” Clarke said. “The freshman coming in, we didn’t really know many people, but they brought us together. They’ve been great this year for us.”

The two seniors were key in helping Clarke adjust to basketball in the United States in her freshman year with the Buffs. In addition, her international experience helped her adjust to the faster pace of basketball here in the United States. Now, with Leonard and Robinson set to graduate, it’s the soon-to-be sophomore’s hope that she’s learned enough to take the next step with the Buffaloes come next season.

Her freshman season isn’t quite over yet, however. Clarke and the rest of Colorado’s women’s basketball team will head to Las Vegas for the annual Pac-12 tournament. The Buffs will take on the Arizona State Sun Devils in the first round of the tourney on Thursday at 12:30 p.m. MST.