Buffs bit by Huskies on senior day, fall 60-46 to Washington 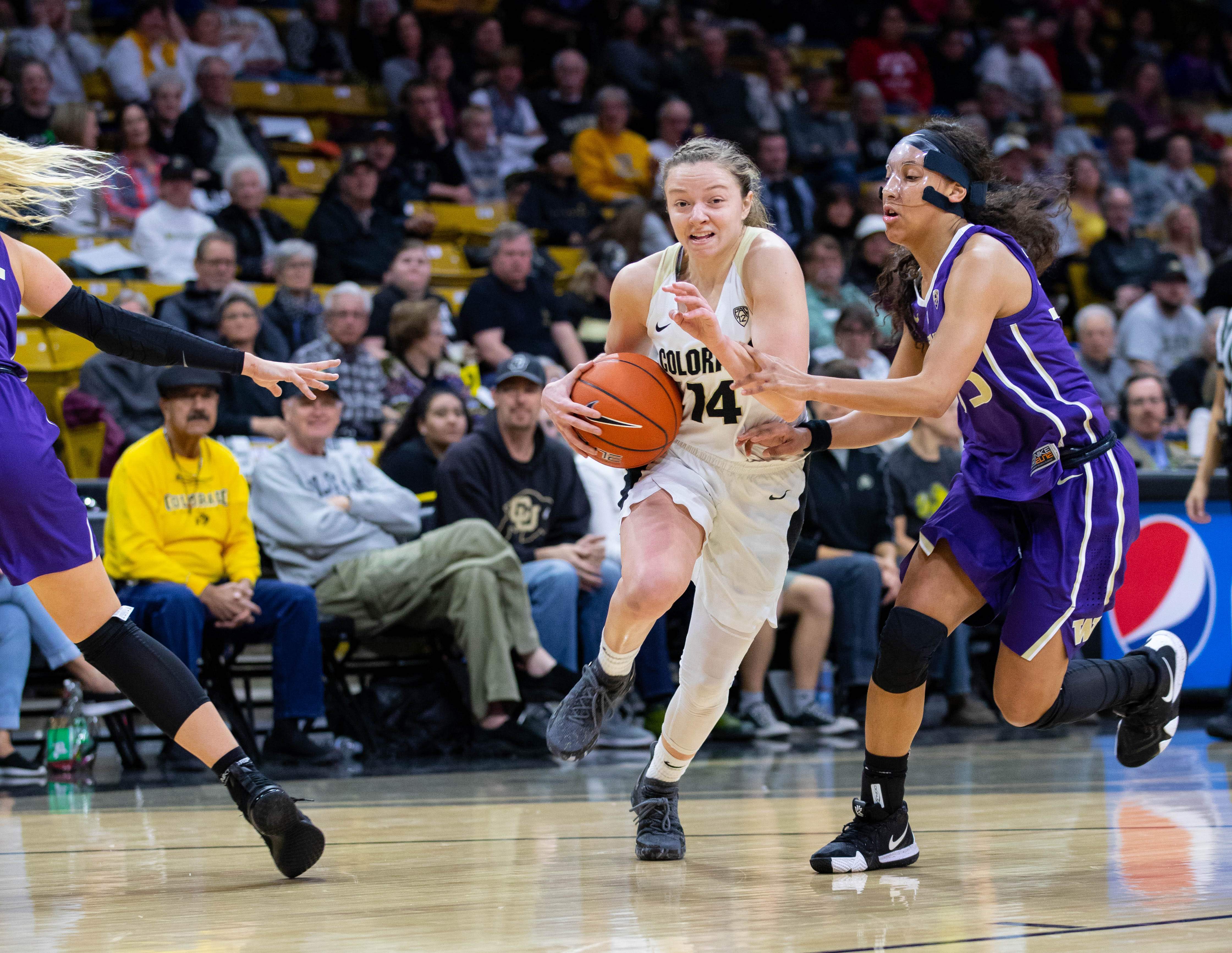 Senior guard Kennedy Leonard blocks her opponent, the UW Huskies, as she drives the ball towards the basket. Feb. 24, 2019. (Casey Paul/CU Independent)

Senior guard Kennedy Leonard played her final game at CU Events Center on Sunday and capped her four-year career at Colorado. On Friday, Leonard scored 12 points and recorded eight assists in the Buffs 72-61 win over the Cougars in her return to the starting lineup.

In addition to Leonard, senior guard Alexis Robinson played her final home game with the Buffaloes on Sunday afternoon. Leonard and Robinson had a combined 2,847 points going into Sunday’s game, and they’re the only active players with 1,000 or more points.

The Washington Huskies hoped to snap a 10-game losing streak dating back to Jan. 11, when they defeated Colorado 68-58 in Seattle. Despite the fact that both teams are near the bottom of the conference, finishing the season on a high note would mean a lot to both squads heading into the Pac-12 tournament.

Colorado snapped a two-game losing streak last time out and looked to give the fans at CU Events Center one last show before heading out on the road for the final two games of the season.

Freshman forward Peanut Tuitele and senior guard Kennedy Leonard opened the scoring for the Buffaloes as they led 5-0 early. Leonard eclipsed 1,600 points for her career with an early three-pointer and layup, moving into eighth place on the program’s all-time scoring list. The Huskies responded though as junior forward Mai-Loni Henson knocked down a three-pointer and led Washington on a 9-0 run.

Tuitele was the beneficiary of slick interior passing and scored her second basket of the game to cut the Washington lead to two. The Huskies responded with an and-one and went the other way and a 7-0 run. Washington then extended their lead to 12 when sophomore guard Missy Peterson splashed a three with just over a minute to go in the first quarter.

Henson extended the Washington lead to 17 with an and-one layup. Freshman guard Emma Clarke knocked down a three in response for the Buffaloes.

Clarke finished with a career-high 15 points and talked about her growing confidence as a player.

“Coming from Australia: foreign country, different teammates, different rules, I came in kind of hesitant at the start,” Clarke said. “My first non-conference game I was just shooting the ball, kind of scared to put it on the floor and scared to be aggressive. As I’ve been through practices and more games and the help of our seniors and the great coaches we have, they’ve definitely instilled confidence in me and made me believe I can do whatever I set my mind to.”

“Emma is a really good shooter,” Leonard said. “I think the timing of it was the best part about it because we were down by a lot of points. I always tell Emma to shoot it whether people are on her or not. I think that it gave her good confidence.”

The Colorado offense struggled throughout the first two quarters, shooting just 37 percent from the field. The Huskies led 34-24 at the end of the second quarter.

Melgoza extended the Washington lead to 15 with an and-one early in the third quarter. Henson knocked down a three-pointer to open up an 18-point advantage for the Huskies.

A layup and free throw from Leonard cut the Washington lead to 13 with just over six minutes remaining in the third quarter. Senior guard Jenna Moser knocked down a three in response for the Huskies.

The Buffs stepped up defensively in the third quarter forcing multiple 24-second shot-clock violations. Sophomore forward Annika Jank cut the Washington lead to nine with a free throw, with just over a minute to play in the third quarter. Junior guard Mathilde Diop went 1-of-2 at the line to cut the lead to eight.

Colorado closed the quarter on an 8-0 run, but the Huskies still led by eight at the end of the third frame. Washington went scoreless over the last five minutes of the quarter.

The Buffs 5-0 run was answered by a three-pointer from sophomore forward Khayla Rooks.

Both teams shot a relatively low percentage from the field in game, but late offensive rebounds made a huge difference for the Huskies.

The Buffs fell short on senior day to the Washington Huskies, 60-46, a tough break for the Buffs’ two graduating members.

“Senior days are tough because there’s so much emotion that goes into the game and the lead up to it and all of that is really difficult,” Payne added. “Even more difficult because we only had one of our two seniors that were able to play today.”

Colorado will travel to Southern California to face the Trojans on Friday. The game tips at 8 p.m. MST. 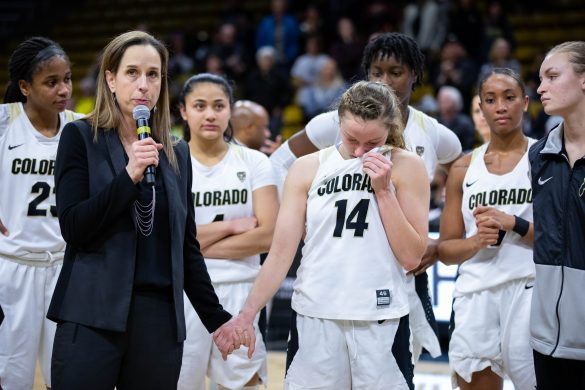 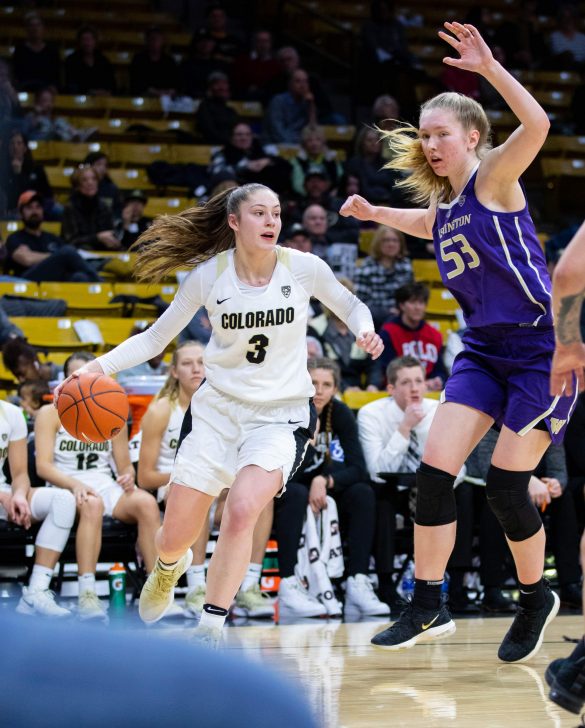 Freshman guard Emma Clarke swerves around her opponent, the UW Huskies, and goes for the basket. Feb. 24, 2019. (Casey Paul/CU Independent) 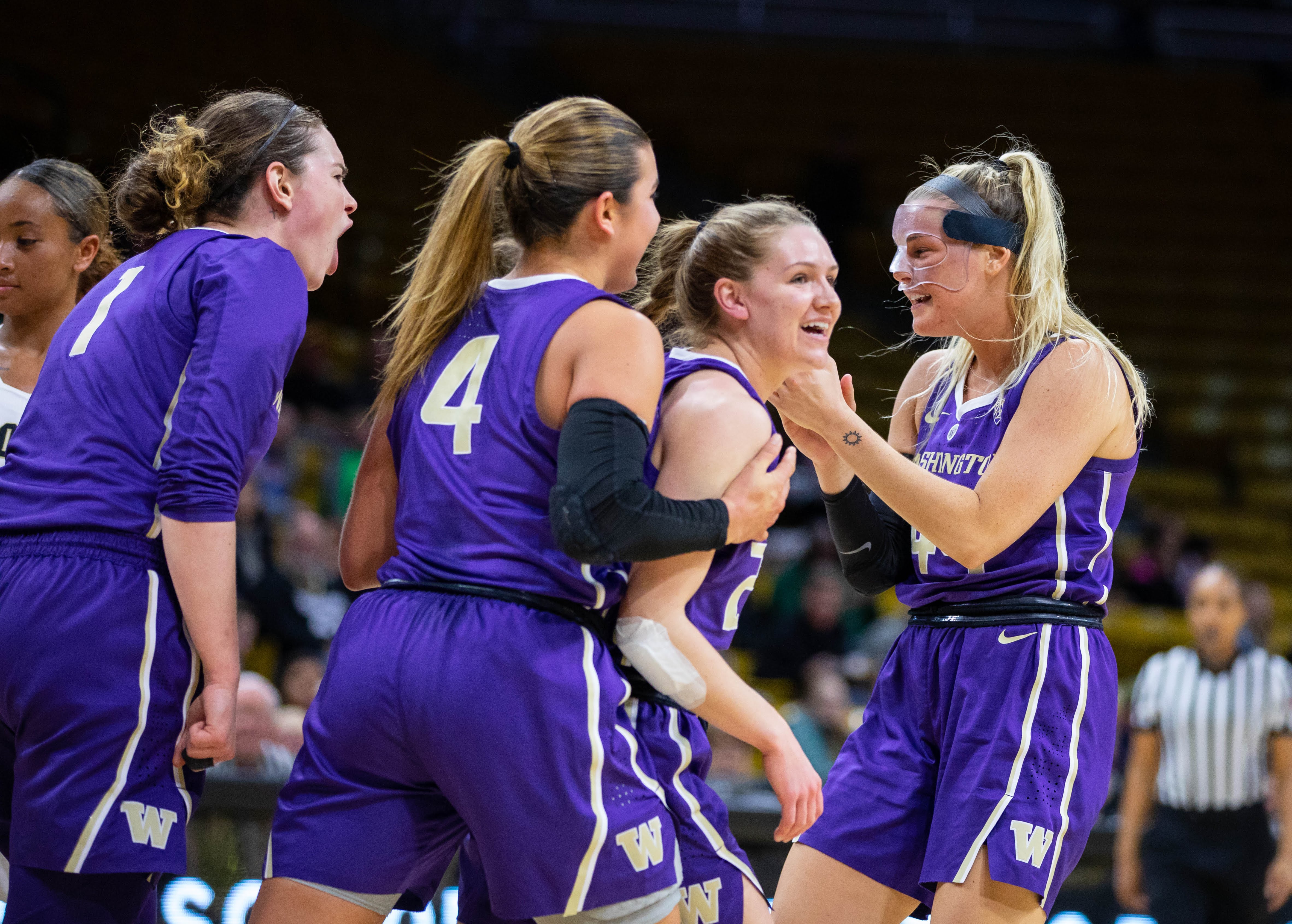 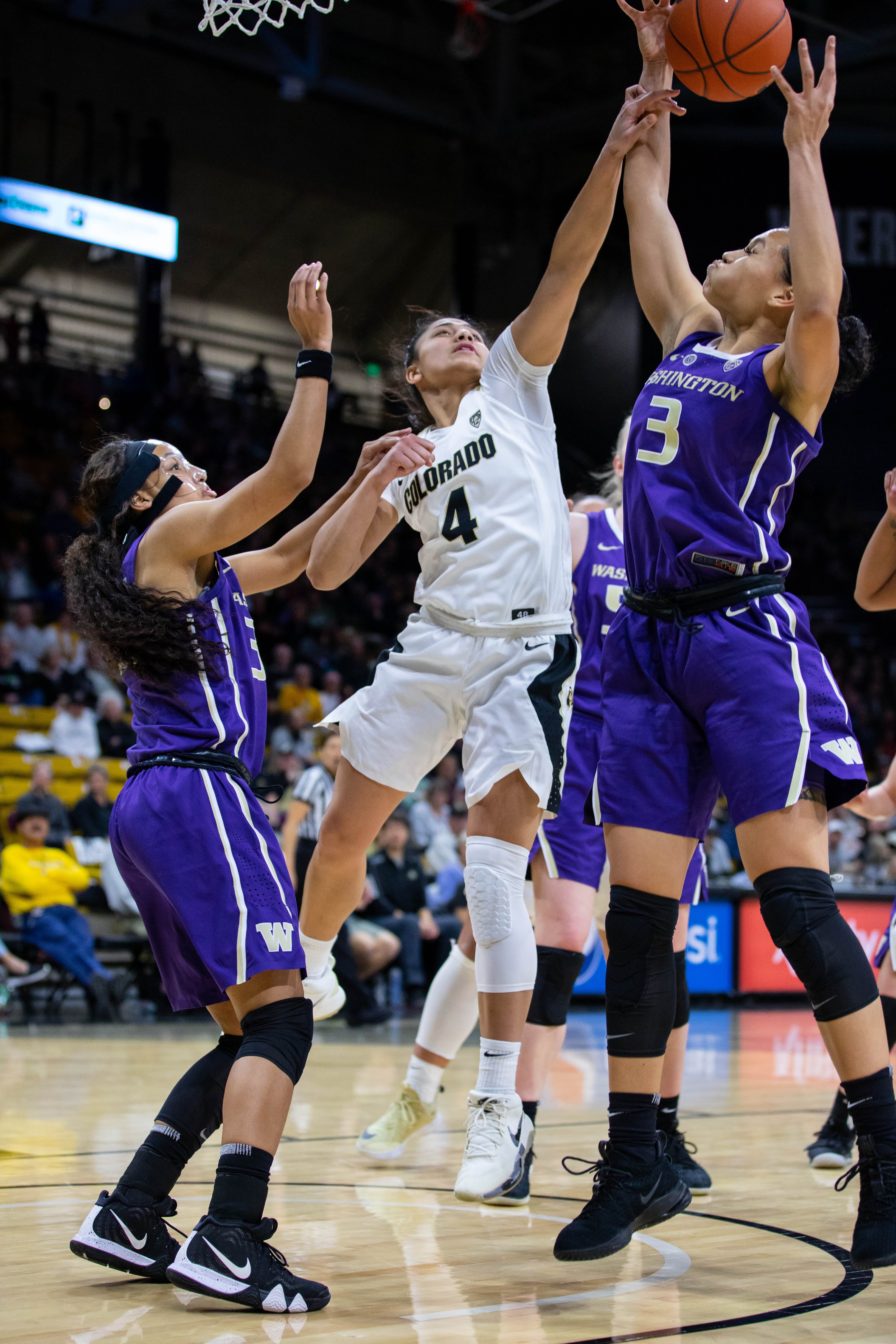 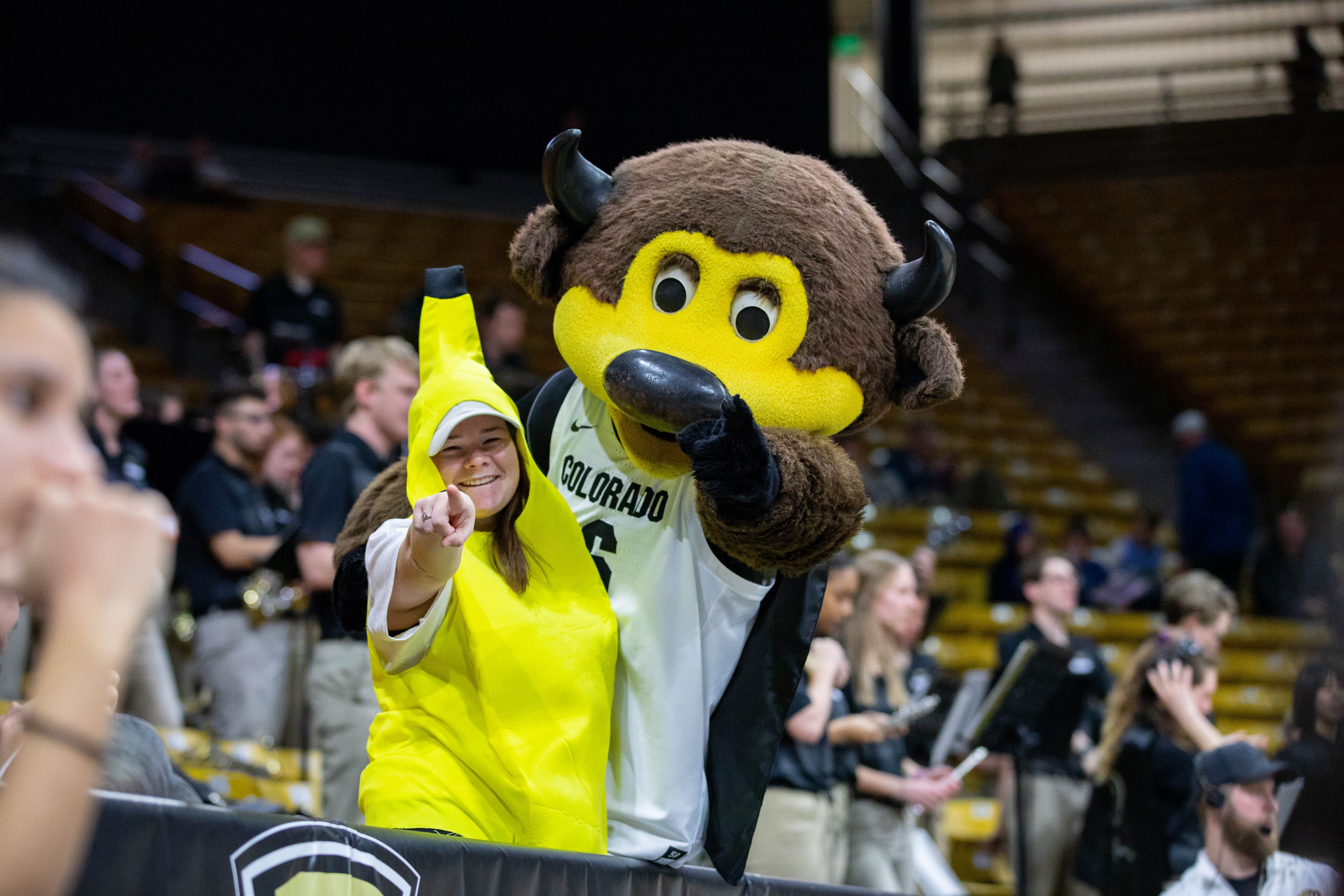 Braeden Reilly and Chip pose for the camera in between plays. Feb. 24, 2019. (Casey Paul/CU Independent) 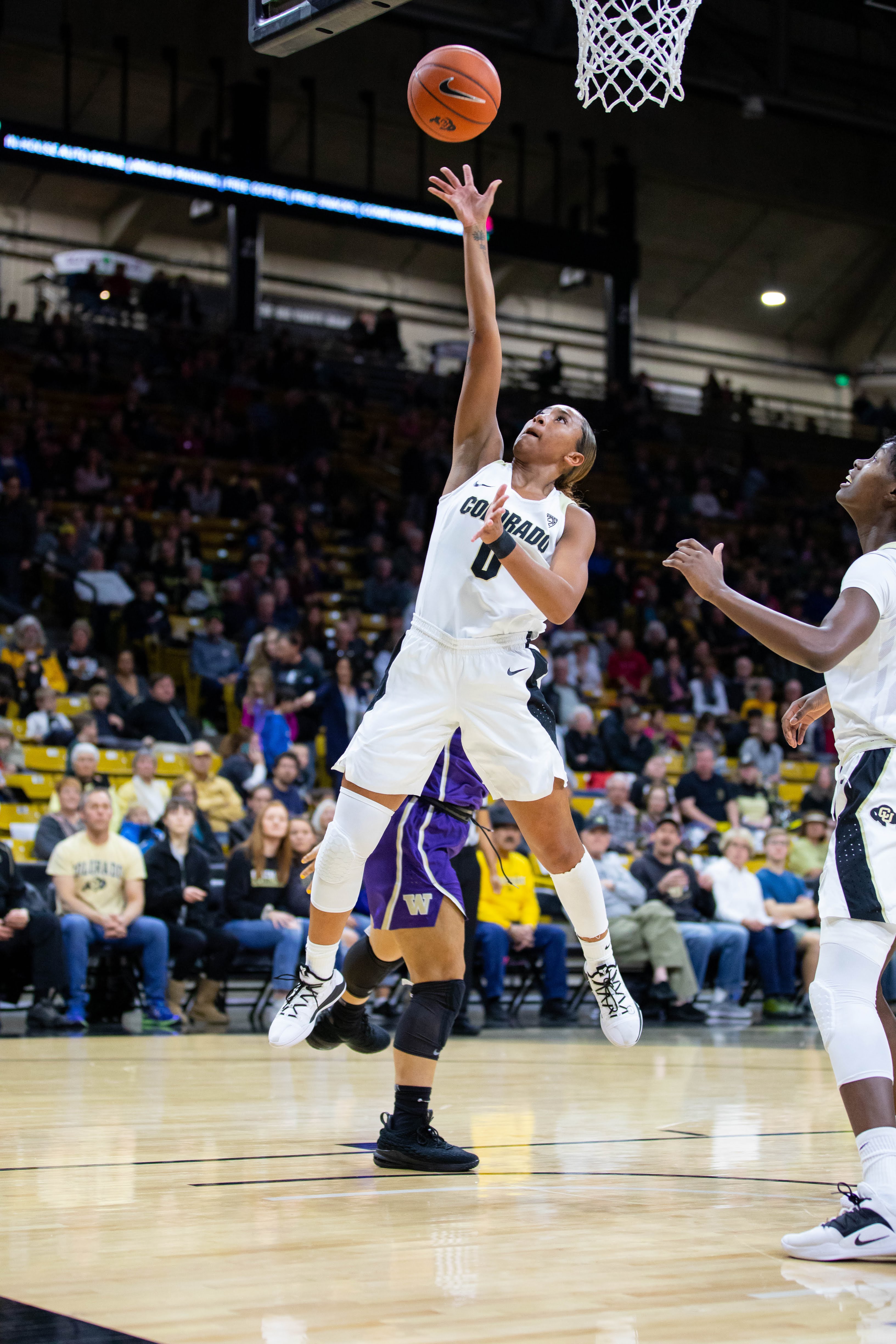