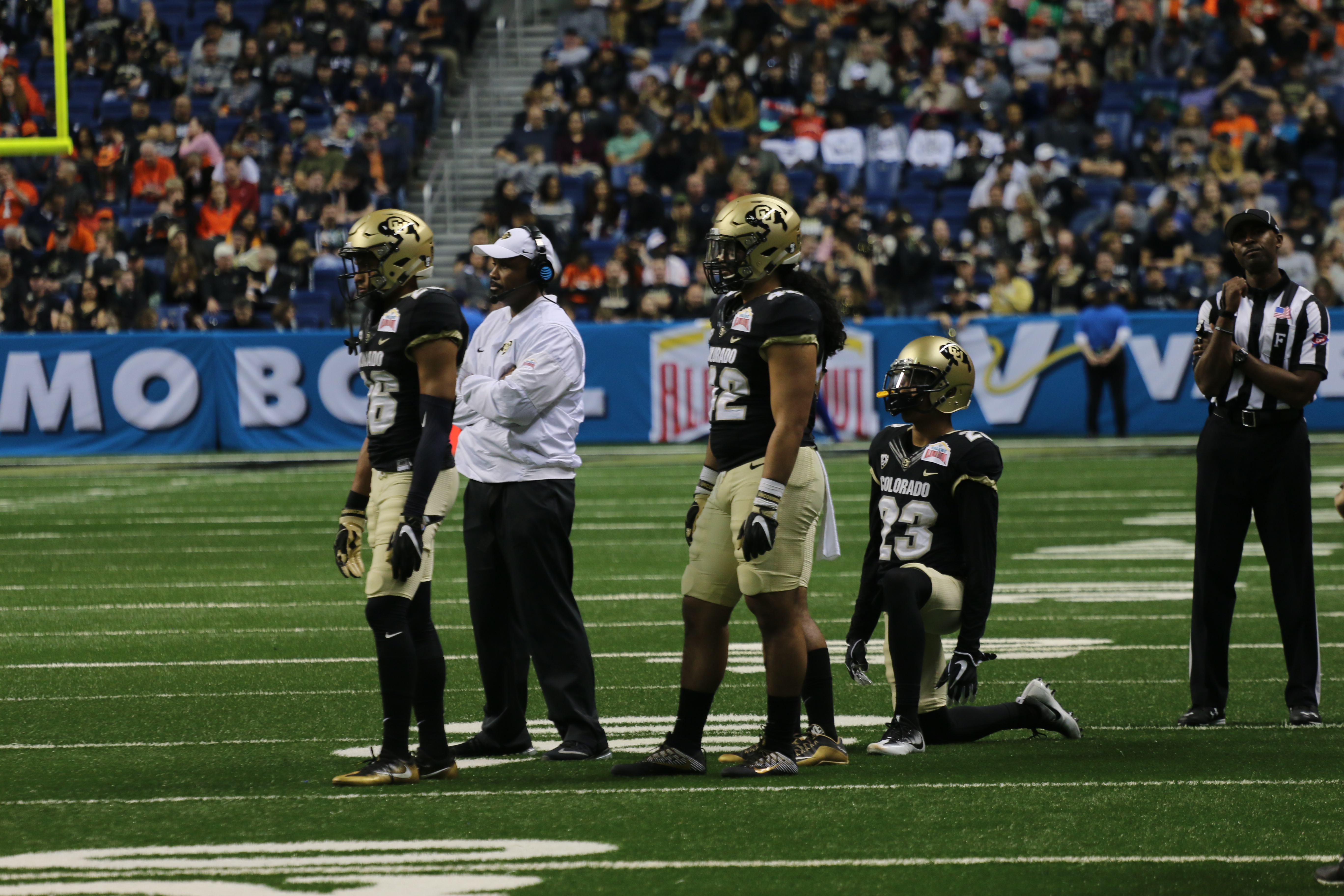 Then-interim defensive coordinator Joe Tumpkin and members of his defense react to a play late in the game on Dec. 29, 2016. (Justin Guerriero/CU Independent File)

[Update] Tumpkin pleaded guilty to one count of misdemeanor third-degree assault in a Broomfield court late last week, accepting the contested, questionable plea deal that was reached by Tumpkin’s legal team and the judge in January.

The plea deal, which was publicly objected by Tumpkins’ ex-girlfriend and assault victim, Pamela Fine, stated the prosecutors would drop all eight counts of assault charged against Tumpkin, five of which were felony second-degree charges, in exchange for a guilty plea.

The former Buffs assistant coach is free on bond and is scheduled to be sentenced on April 25, 2019. Tumpkin still faces the possibility of jail time.

Pamela Fine, the ex-girlfriend of former Colorado Buffaloes assistant football coach Joe Tumpkin, objected to the plea deal in Dec. 2018 that the latter agreed to with the district attorney’s office in Broomfield, Mitchell Byars of the Boulder Daily Camera reported earlier this week.

Tumpkin resigned his position with the football program in Jan. 2017 just one day before being charged publicly with five counts of felony second-degree assault and three counts of misdemeanor third-degree assault.

His actions cast a shadow on the University of Colorado. After an independent investigation into the university’s handling of the initial accusations against Tumpkin, then-head coach Mike MacIntyre, athletic director Rick George and chancellor Phil DiStefano were all reprimanded for their failures to take appropriate action until the situation was made public.

MacIntyre and George were both ordered to donate $100,000 to a domestic violence support organization while DiStefano received a 10-day suspension.

Fine attempted to file a lawsuit in U.S. District Court in Denver against MacIntyre, George, DiStefano and CU President Bruce Benson in Sept. 2017. In the suit, Fine claimed that her initial allegations against Tumpkin, which she shared personally to MacIntyre who informed George, who in turn told his superior, DiStefano, were not taken seriously.

It was dismissed by U.S. District Judge William J. Martinez this past July.

Fine’s formal objection to the Broomfield Combined Court is rooted in the discrepancy between the original plethora of charges that Tumpkin faced and what he’d actually be charged with in the event his plea deal were accepted.

The Daily Camera reported that the plea deal in place for Tumpkin would have seen him plead guilty to just one misdemeanor count of assault.

Below is part of Fine’s remarks about her objection to the plea deal.

“If the current plea deal is accepted, it will leave the defendant with only one inescapable message: your violence towards women will ultimately not result in any meaningful criminal penalties,” Fine wrote in the objection. “The message being sent to Mr. Tumpkin and the rest of the college football community is that a Division I football coach at a Power 5 school can beat a woman they love for two years and walk away with nothing but a misdemeanor.”

A judge must approve a plea deal in open court for it to become official.

The CU Independent will update this story as more information on the progression of Tumpkin’s case becomes available.