Opinion: What are you going to do with ‘that’ degree? 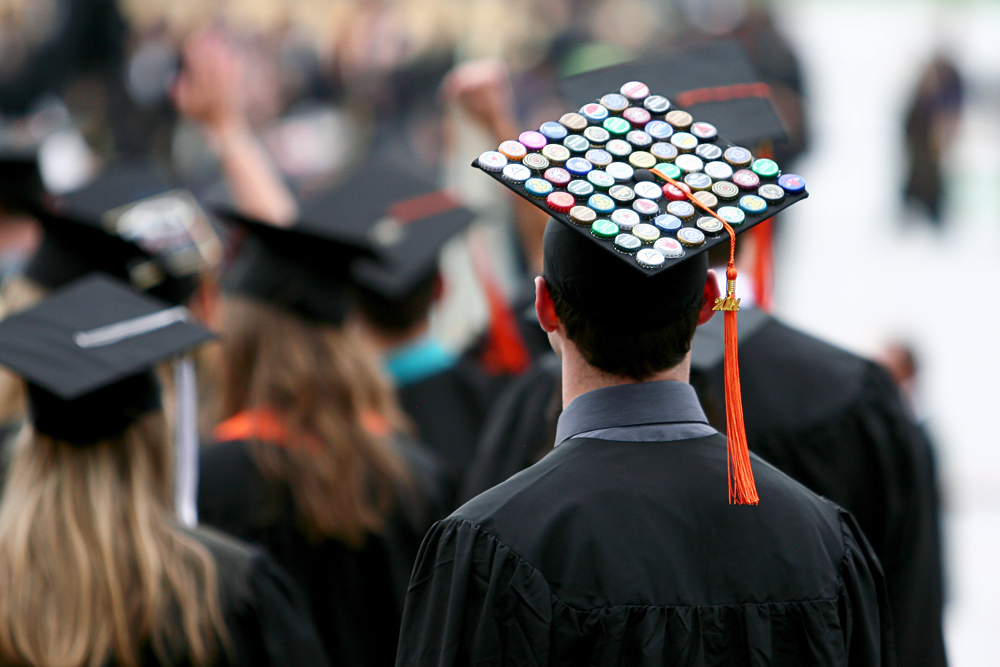 What are you going to do with that degree?

Yes, I know you’re sick of hearing that question by now. Sorry. But it’s a question we all have to deal with, so let’s spend a little time engaging with it.

No, I’m not asking you to share your career dreams with me. Rather, I want to discuss a key underlying message in that loaded question and in some typical lines of response.

Let’s illustrate the issue. I study philosophy, so this question is not only very common but also can be quite painful. There are two common answers given to this question.

The second answer is that philosophy is one of the best degrees for getting into law school, and as we know, lawyers can make a fairly comfortable living.

These responses aren’t just given by philosophy majors to defend their choices, but also by philosophy departments to recruit new majors. And by no means is this unique to philosophy. Responses to the degree question often appeal to one’s future income or job. When giving these answers, they typically send a clear underlying message: the purpose of a degree is to make money.

Is the purpose of a college degree — and all the experiences that go along with it — primarily to make money?

Despite this seeming to be the dominant view of the value of college degrees, we ought to strongly reject the claim that the primary purpose of a college degree is financial in nature.

Coupled with the current reality of many people facing significant barriers to attend or graduate from college, the view that the main purpose of a college degree is better financial security commits us to a very disturbing consequence about how we value people.

As many of you are aware, members of various groups are less likely to go to college through no fault of their own. There are clear racial and socioeconomic disparities in who pursues a college degree. Even once enrolled, there are further disparities in dropout rates for those from various marginalized communities — be they Black, differently abled or members of the LGBTQ community.

By accepting that the primary purpose of a college degree is future financial security, we are committed to the claim that many people are less deserving of future financial stability merely due to the groups that they happen to be members of, through no decision of their own.

It gets even worse given that our society values people based on their financial status. Capitalism pretty much says that your value is the value of your capital, regardless of what you do with it or how you came to have it.

As much as I like myself, I know I’m not more valuable than others, and certainly not due to such features beyond my control. To believe otherwise would be abhorrent.

Some might try to reject this disturbing conclusion by saying that, while the financial view of the college degree combined with the current realities of higher education stipulate that people will be treated differently due in part to factors beyond their control, that needn’t imply endorsement for such unequal treatment.

The problem with this response is that failure to work towards a change — be it with how people attend higher education or what they get out of a degree — is a tacit endorsement of the status quo. (Some caveats may apply). To use the slavery example, someone who purchased goods created from slave labor, no matter how much they said or even believed they don’t like slavery, is tacitly endorsing a system of slavery.

To tweak the old saying: actions speak louder than words.

Another point of clarification: the above isn’t to say that you, in pursuing a financially secure future by earning a college degree, consciously believe that some people are less valuable than others. What it is meant to show is that our society, in making the primary purpose of college financial — coupled with the realities of degree attainment — endorses a system where some people are less valuable due to group membership beyond their control.

So no, you personally might not be consciously grossly biased, but you can still be complicit in a biased system.

Of course, there are different views of what people mean by “value” — a conversation for another time — so there might be some way to weasel out of the claim that these financial discrepancies entail a difference in value in our capitalistic society.

But even if such weaseling worked, we would still be committed to disgusting conclusions. Given how one’s financial situation correlates with life expectancy, with general health and the ability to go to the doctor and with the ability to have an acceptable quality of life, the financial view of the college degree commits us to the view that some people are less deserving of a longer, healthier and happier life due to their racial, socioeconomic, gender identity, etc., group membership.

It all sounds pretty messed up when we spell it out, doesn’t it? But that’s what the financial view of the college degree coupled with the relevant background conditions commits us to.

But does the primary purpose of a college degree have to be financial in nature?

The University of Colorado itself, via the official “Mission, Guiding Principles and Vision Statement,” claims that the purpose of higher education is much more than merely financial. While that is surely part of their stated goal, CU also claims that the university should “[m]aintain a commitment to excellence … [e]ncourage, honor, and respect teaching, learning, and academic culture … [e]nsure that the university is an economic, social, and cultural catalyst.”

While it’s a separate question if the university is doing a good job of its stated mission, it at least illustrates that our current academic institutions believe that (or at least pay lip service to the claim that) higher education isn’t just about the money.

Reflect on your own experiences here at CU for a moment.

Haven’t you learned critical reasoning skills, applicable to whatever you end up “doing” with your degree?

Perhaps you’ve found a new academic passion, dramatically changing the course of how you live your life. You’ve made meaningful personal connections, enriching your life and the lives of those you interact with.

And you’ve likely been exposed to diverse ideas and cultures, giving you a richer view of the world and your place in it. And maybe you’ve even realized how you can impact the world for the better.

The value of a college degree can and should be so much more than just money. It should be about the things you learn, the people you meet, the ways in which you learn to engage with the world around you and all the other ways you grow as a person.

But so long as our society is such that those without college degrees are less likely to be financially secure, and one’s chances of graduating from college are partially dependent on group factors beyond their control, the societal value of the college degree will be predominantly financial.

And as we’ve seen, that commits us as a society to some damning consequences.

I started this piece trying to figure out what the value of the college experience should be, compared to what it is. But upon even a little reflection, it becomes hard to escape the inequalities inherent in the system and the repugnant consequences thereof. And we cannot ignore something just because it is upsetting or disturbing.

While I still believe that each of us individually ought to care about the non-financial goods of the college experience, that can’t be enough. While you will likely financially benefit from your CU degree (*student debt … sigh), don’t let your sole focus be on yourself.

Use your privileged position to help make necessary societal changes so that the primary value of the college experience is no longer an unjust, unequal devaluing of other people due to no fault of their own.

If you’re not using your college degree to better the world — not just yourself — what’s the point?