The women’s basketball team celebrates their win against Navy by swaying to the CU alma mater. Dec. 9, 2018 (Casey Paul/CU Independent)

The University of Colorado Buffaloes women’s basketball team matched up against the Navy Midshipmen on Sunday at home.

The Buffs entered the matchup sporting a record of 7-1 with a perfect 5-0 home record. The opposing Midshipmen sailed into Boulder with a 4-3 record but did come off a three-game win streak.

The game opened evenly matched, with CU playing good defense. But Navy maintained possession and kept getting rebounds. Navy Guard Jennifer Coleman got out to a quick start, hitting the first shot of the game for the Midshipmen. Soon after, Buffs’ sophomore Mya Hollingshed drilled a three to open up the scoring for the Buffaloes.

Sirena Tuitele established herself early, earning two early layups in the post. Senior guard Kennedy Leonard commented after the game on getting her scorers the ball.

“When I get the ball, I tell them to run as fast as they can and get their hands up,” Leonard said.

Time and again, CU players streaked down the court and received dime passes from Leonard.

It was air ball city for Navy, missing several in a row. The Midshipmen managed to fight for rebounds and eventually finished a layup with 5:05 left in first, but Colorado led, 9-4.

Navy had good possession but awful shooting. With two minutes left in the first quarter, Navy was shooting an abysmal 2-of-15 from the field.

The score read 17-6 in favor of the Buffs at the end of the first. Colorado dominated in everything but rebounds, as Navy led in that regard early, 12-5.

Quinessa Caylao-Do kept getting it done for the Buffs, driving to the hoop and drawing a foul with 5:46 left in the second. After hitting both free throws, she lead both teams with ten points.

The Buffaloes defense looked good in the first half. The team’s communication was fantastic, which led to five steals, a block and a big 35-14 lead. On top of that, Colorado shot 80 percent from 3-point land, making 4-5 compared to Navy, who missed all eight attempted three’s.

The scoring leader at halftime for Colorado was Caylao-Do with ten points, two rebounds, a steal and a block. Leading Navy in scoring at half was Jennifer Coleman with seven points, three rebounds and an assist.

The third quarter was more of the same. The Buffs came out hot and stayed hot, pushing their already big lead to 43-20.

CU’s coaching staff was utilizing Tuitele well, having her drive inside to get the layup since Navy really had no answer for her size and strength. After getting fouled with 3:38 left in the third, she hit one of two free throws and pushed her point total to eleven.

While Colorado maintained its hefty lead, Navy managed to hang with them in the third with both teams scoring 13 points.

The Buffaloes carried a 48-27 lead into the final quarter and looked to maintain that lead while playing a clean ten minutes of basketball.

The first five minutes of the fourth quarter was dominated by Navy. The Midshipmen managed to put up ten points compared to CU’s meager two and cut the lead to just 12 points. They had the opportunity to cut the lead to eight but missed four straight free throws.

“They made adjustments to our zone, we needed to buckle down on offense and lock in on defense,” Leonard said.

Darryl Langford, a player for Navy, drained a 3-pointer with 3:42 left and made it a ten-point game.

Navy outscored CU 29-24 in the second half. They would have been much closer if they made free throws. If so, the game very well could’ve been tied.

Tuitele earned player of the game, as she worked her way up to 15 points, which led her team and the game in scoring. CU’s Kennedy Leonard must also be mentioned who had nine points, nine assists and four steals, including her 600th career assist.

“I didn’t even know I had 600 assists. Props to my teammates because without them I would have zero,” she said.

The game ended with a 59-43 final score. The Buffs almost let it slip away, but a pickup of offense in the final moments won them the game.

“A good win against a very good basketball team that won 25 games last year, and I think they are picked third in their league this year, so a good game for us,” said head coach JR Payne.

Up next for CU is a home game against Prairie View A&M on Wednesday, Dec. 12. Colorado and Prairie view tip off at 7 p.m. MST. 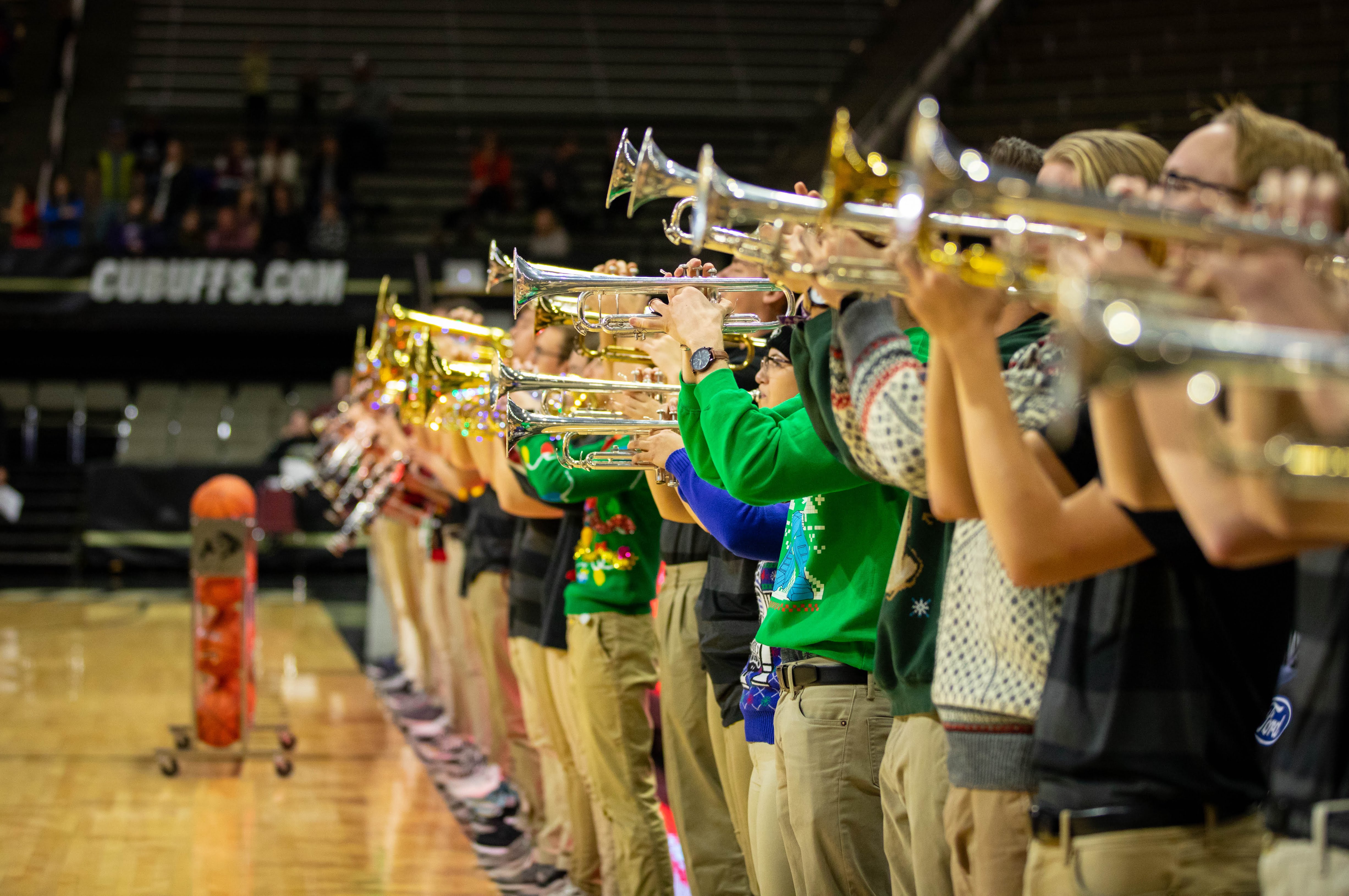 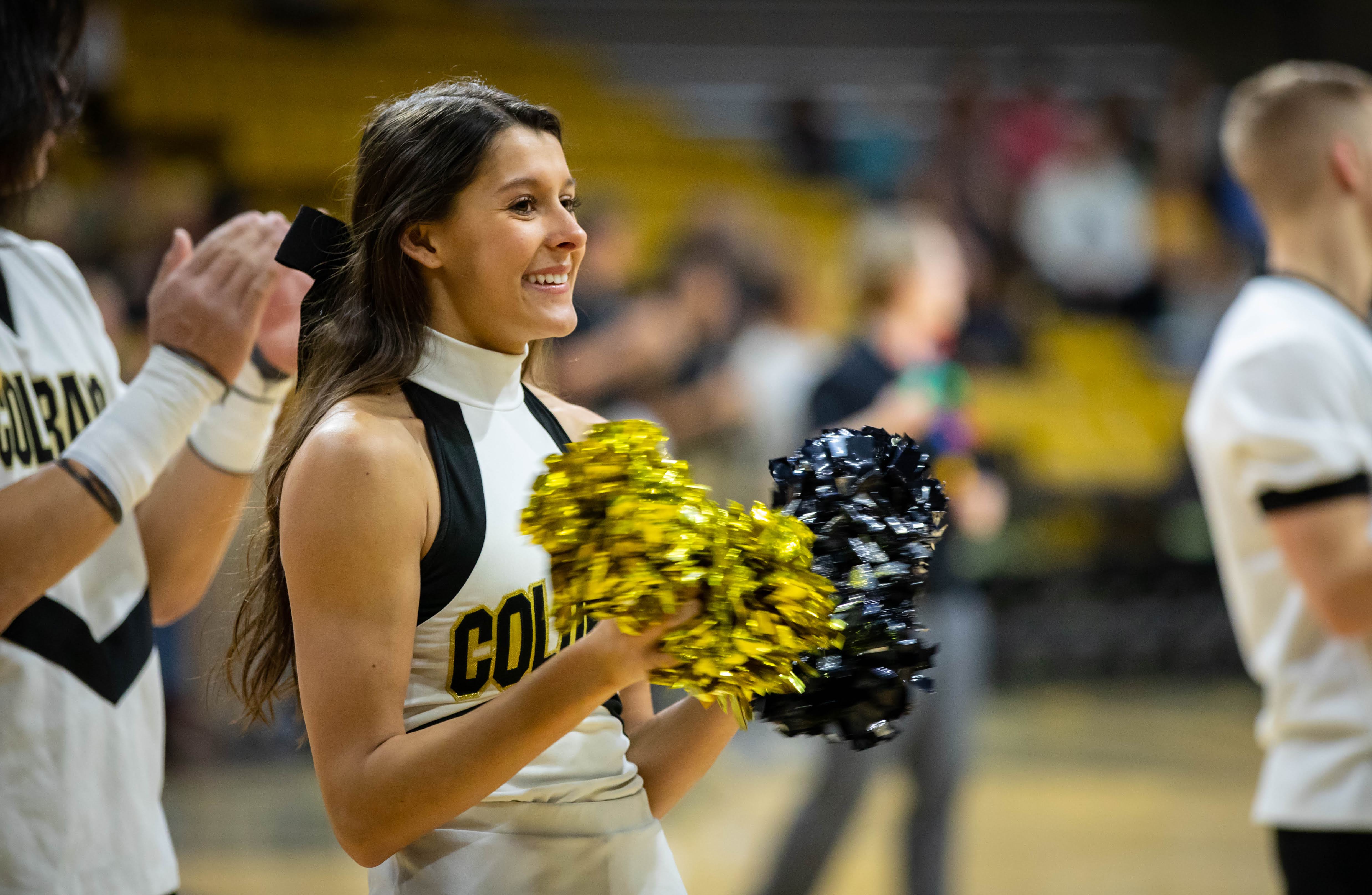 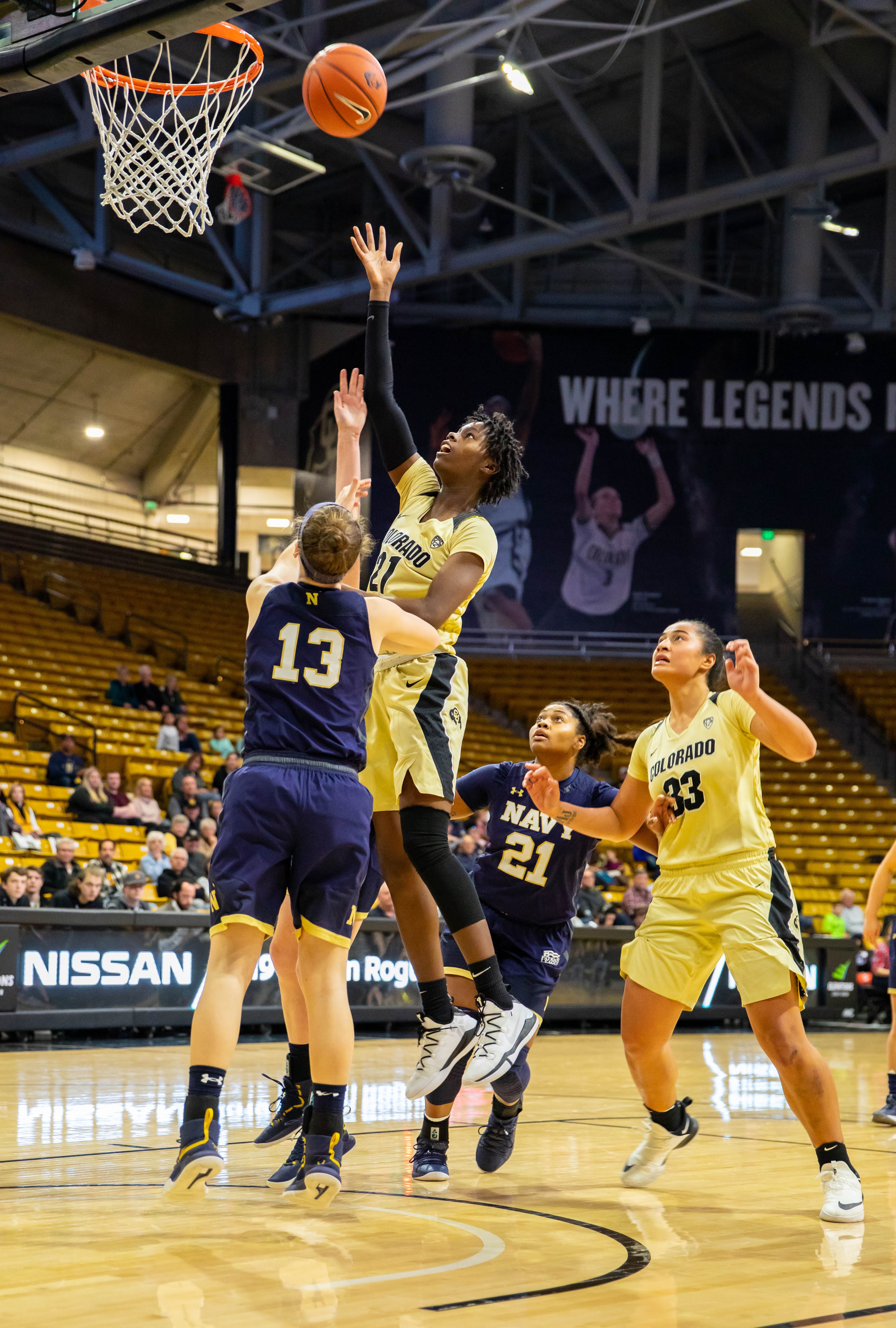 Sophomore guard Mya Hollingshed goes in for a layup while battling off her opponents, the Navy Midshipmen. Dec. 9, 2018 (Casey Paul/CU Independent) 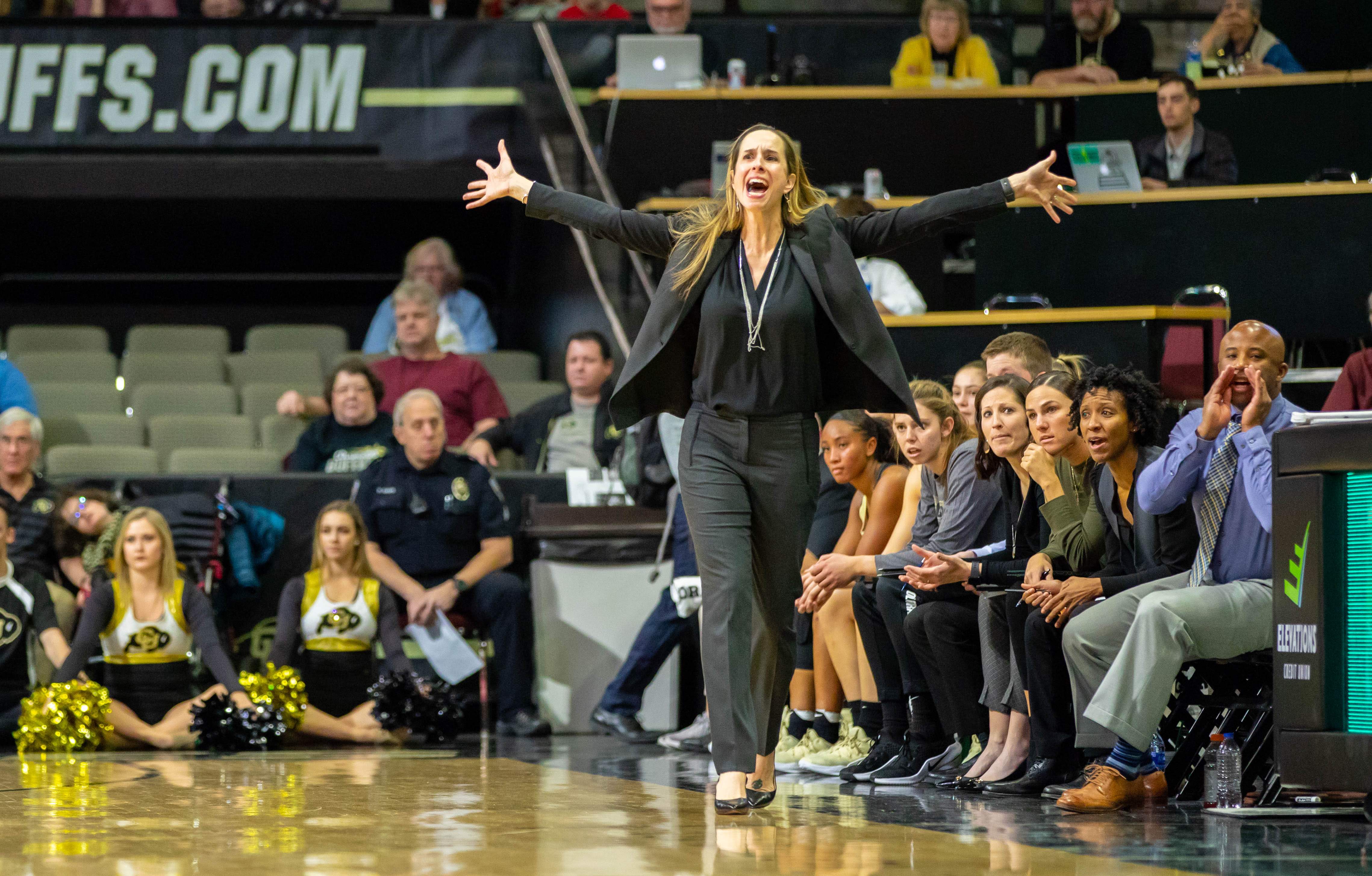 CU women's basketball coach JR Payne yells at the referee from the sidelines at the game against the Navy Midshipmen. Dec. 9, 2018 (Casey Paul/CU Independent) 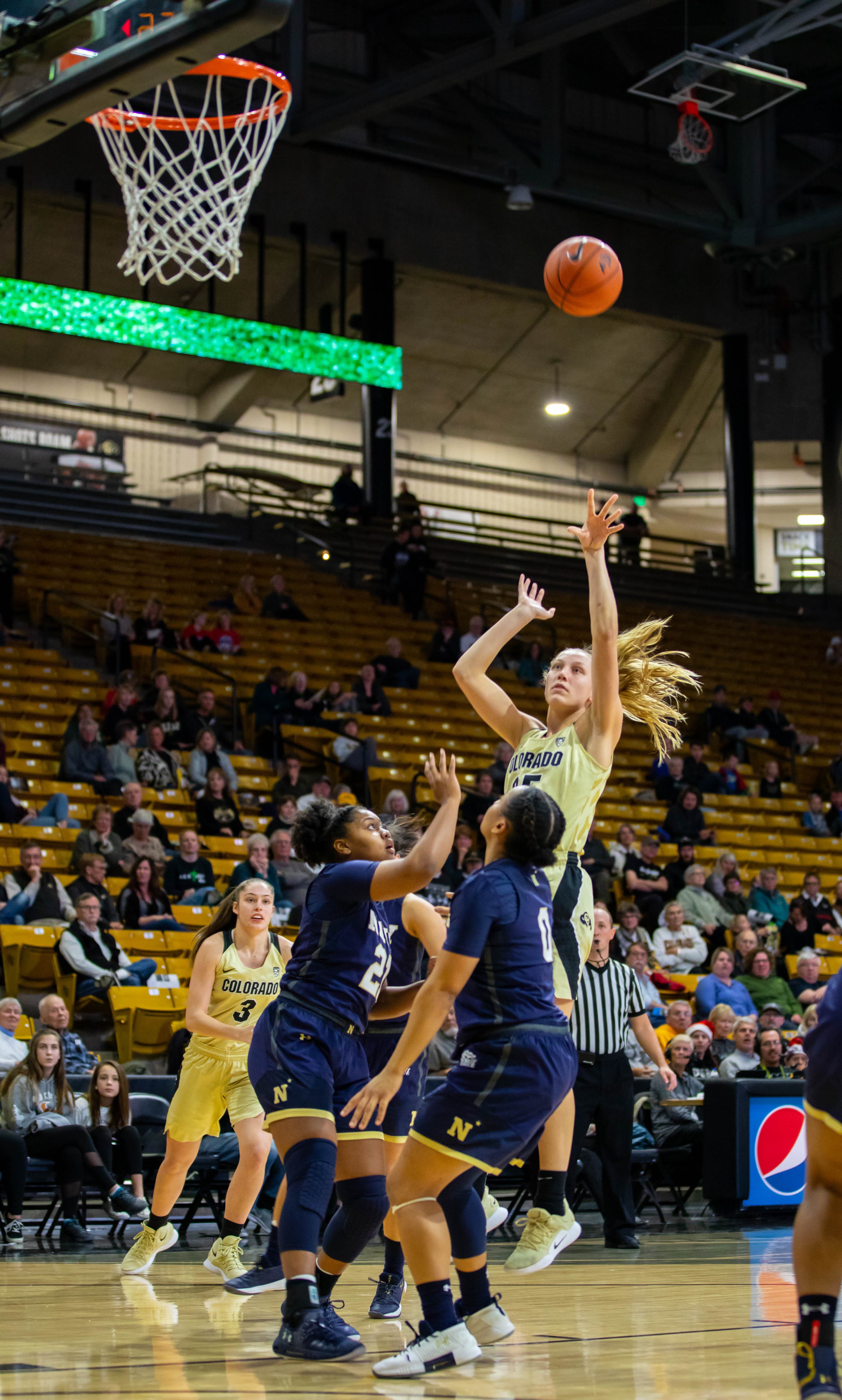 The women's basketball team celebrates their win against Navy by swaying to the CU alma mater. Dec. 9, 2018 (Casey Paul/CU Independent)