“Songs of Solitude and Hope” presented as part of Faculty Tuesdays 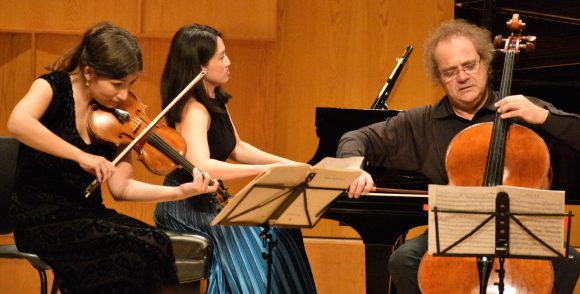 Members of the internationally renowned Takács Quartet, residents at the University of Colorado since 1983, presented “Songs of Solitude and Hope” last week at Grusin Concert Hall. Featuring members András Fejér and Harumi Rhodes and collaborative pianist Hsiao-Ling Lin, the performance consisted of works by Edward Elgar and Ludwig van Beethoven. It’s one in a series of Faculty Tuesdays concerts presented by CU’s College of Music.

Elgar’s Sonata for Violin and Piano in E Minor, Op. 82, written near the end of World War I, is one of his more obscure works. Combining a dulcet melody with elegant piano accompaniment, this piece showcased the violin’s capacity for a rich, lyrical line. The movements wander, often without a clear direction, building and receding without ever reaching a definitive conclusion.

Elgar perfectly captured the sonata’s vibrant structure in a letter written to his close friend Alice Stuart Wortley. Elgar described the first movement “Allegro: Risoluto” as “bold and vigorous.” The following movement, “Romance: Andante,” was “a fantastic, curious movement with a very expressive middle section,” and the concluding “Allegro non Troppo” was a “very broad and soothing … last movement.” A potent sadness characterizes the piece, probably influenced by the tragedies of World War I. Yet it is defiant in the face of adversity, refusing to give up hope for the future.

Quartet member Harumi Rhodes played with wonderful dynamic contrast in the “Allegro: Risoluto,” her high notes decreasing to a quiet whisper above Lin’s delicate piano playing, the melody echoing lightly through the concert hall. Her passion and expressiveness translated clearly into her playing. She took slight steps back and forward, dancing and swaying to the music.

Cellist András Fejér joined Rhodes and pianist Hsiao-Ling Lin for the second half of the program with a classic: Beethoven’s Piano Trio in B-flat Major, Op. 97. Nicknamed “Archduke,” this piano trio was dedicated to Beethoven’s student and patron, the Archduke Rudolf of Austria, in 1814. Before beginning the piece, Rhodes told the audience one of her undergraduate professors had described the “Archduke” as “heroic and long-winded.” This earned a chuckle from the audience.

However, she believed the piece was much more than this description, stating it was infused with “hope,” not “naïve or innocent” kind of hope, but rather a secure hope “root(ed) in…weathered experiences.” Beethoven premiered the piece himself as the pianist. It was his last public performance before his deafness ended his career as a virtuoso pianist.

Although somewhat “long-winded” as Rhodes mentioned, the piano trio was lively and energetic. In the first movement, “Allegro moderato,” Fejér and Rhodes introduced many animated motifs, which were later echoed by Lin on the piano. These quick melodic exchanges characterized most of the movements, creating a quasi-dialogue between the instruments.

Contrasting the first two movements, the third movement, “Andante cantabile ma però con moto,” was slower and more reserved, the piano quietly leading with several ascending melodies. This third movement, although elegant, was rather lackluster compared to the rest of the work.

However, the final movement, “Allegro moderato – Presto,” did not disappoint. A fun surprise, the energetic motifs from the “Allegro moderato” returned in full vigor, and the concert ended with a dramatic flourish.