Student section shows up in force to support the Buffs, finally 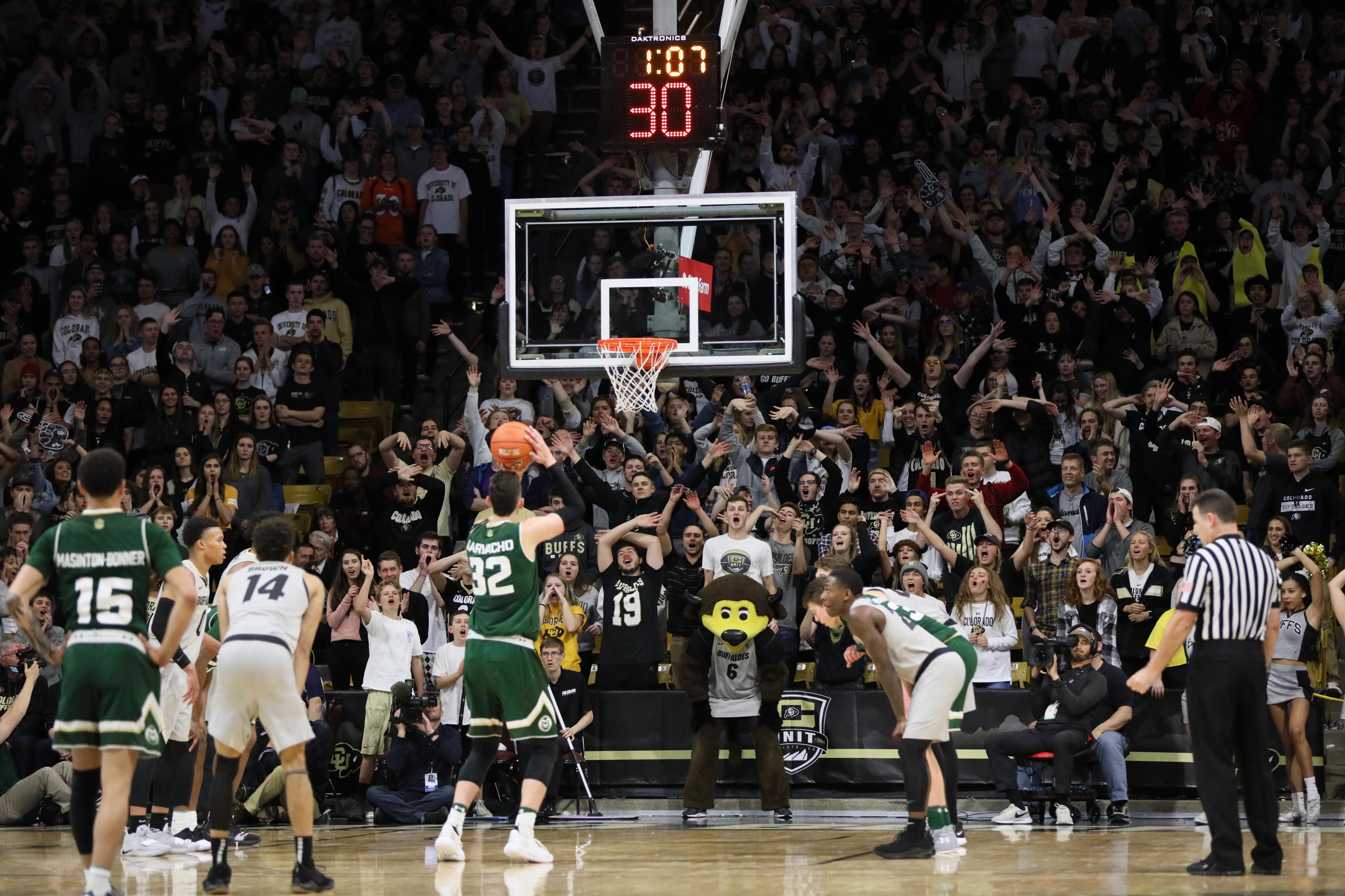 The Colorado Buffaloes men’s basketball team has now played four home non-conferences games, but the CU matchup against CSU on Saturday was unlike any of the other three.

Through the Buffs’ first three non-conference home games, the CU Events Center was barely half-full. Granted, those games were against Drake, Omaha and Portland, but even still, the overall lack of turnout, especially from the student section, was worrying.

You’d think that with such good turnout at the football games, maybe half or even a third of those students would show up to cheer on the basketball team now that football season has come to an end.

In the CU Events Center, the student section is about 10 rows of gold seats and then about 30 rows of bleachers. For the first three home games, there was plenty of gold seating still available and practically no one standing behind them in the bleachers. That all changed when the CSU Rams came to town.

“When you see our student section today, relative to the other three home games, anybody that was here those other three games, knows the difference,” head coach Tad Boyle said after defeating Colorado State on Saturday.

The student section, the so-called “C-Unit,” packed the house on Saturday, completely filling the gold seats in the first few rows. As the game neared closer to tip off and even throughout much of the first half, CU students were also able to fill most of the bleachers for the first time this season.

A previously sparse and even quiet student section was especially rowdy on Saturday, chanting, “brick” and singing, “you’re not gonna make it” to the tune of  Twisted Sister’s “We’re not Gonna Take it” on CSU free throws. Students even broke out the legendary “I said it sucks to be a CSU Ram” chant while the Rams were on their side of the floor.

A couple big plays down the stretch had the CU Events Center going absolutely ballistic. An Evan Battey and-1  that stopped a 10-0 run by the Rams late in the second half proved to be one of the most momentous plays of the game, and the crowd knew it. With the lead back and now all the momentum in the Buffs’ favor, the crowd was standing, engaged and, most of all, loud.

Without a doubt, the crowd gave the players that extra something they needed to come out with a win in a close game.

In a rivalry game with 12 lead changes, it was the home crowd that ultimately made the difference in the end.

“[The fans] know how much this game means for us and this university. We needed them tonight, they were huge for us down the stretch, they got our energy up [and] they motivated us to keep going. Now we’re just trying to get them to come out like that every game,” said sophomore guard McKinley Wright IV.

Sophomore guard Mckinley Wright IV pumps up the crowd during the waning moments of the second half of play at the CU Events Center. Dec. 1, 2018. (Nigel Amstock/CU Independent)

The crowd was so impactful that they even got a personal thank you from Boyle after the CSU game.

“Students — we need you every game,” Boyle exclaimed after grabbing the mic and addressing the student section directly. “We love you!”

Boyle had more to say on the best fan turnout of the season in his postgame press conference.

Saturday was a critical win for the Buffaloes, and not just because it was a rivalry game. It wasn’t even the fact that they beat CSU for the first time in two years. And it wasn’t the fact that the Buffs avoided losing another winnable non-conference game. This game simply had an immeasurable impact on all Buffs fans.

Fans that went to the game and were personally thanked by Boyle will definitely come back, and fans that didn’t go to the game are probably kicking themselves, wishing they had. Others may have just figured out the season started. Regardless, the turnout for the rest of the season should skyrocket. Maybe fans just needed a bit of time to recover from an unsuccessful football season.

It appears some of the focus in Boulder has shifted from Folsom Field to the CU Events Center.

The turnout for Saturday’s game should be the standard for the rest of the season.