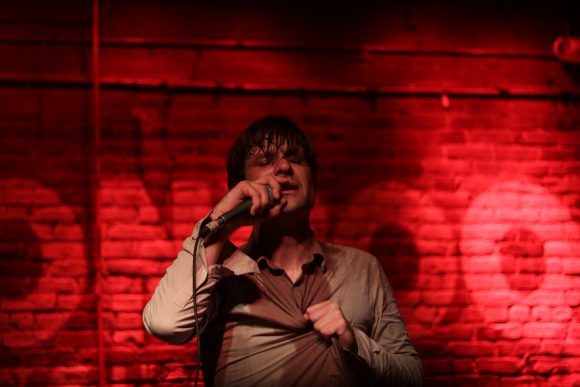 This past week, John Maus embarked on a round of North American shows, stopping in Denver for two nights at the Moon Room.

The California-based Maus is an enigma. While you can look at him as his music — a complex mash of synthesizers, drum machines and heavily reverberated vocals — the man possesses much more depth.

Maus is a paradox in the sense that he doesn’t quite fit the aesthetic of the synth pop music he has pioneered. If seen walking through a college campus, he could be mistaken for a professor on their way to office hours. This might be due to the fact that Maus has an impressive resume. He holds a Ph.D in Political Science, can build his own modular synths and is even dabbles in organic chemistry.

This tour follows a difficult year for Maus. His brother and bandmate, Joseph, fell ill with an undiagnosed heart condition and passed away hours before a show in Latvia back in 2017. Dates for the rest of the tour were immediately cancelled.

After a short break, Maus returned for a solo tour that would be arranged to accompany him and his microphone as well as a sequenced light show to sync with his songs. It was announced that he would return to his original live performing style with just a microphone and preloaded instrumentals synced to a midi driver.

The Denver show proved otherwise. While Maus was still solo, the house lights in the Moon Room were left on throughout the set, eliminating the mysticism that was supposed to accompany his set. Lights aside, Maus still delivered an intimate and emotional solo show.

His live sets are characterized solely by his emphatic gestures and head-bangs, causing him to resemble an excited cockatoo on a perch listening to their favorite song. He is forceful and rigid with his movements and is incredibly consumed by the one driving force throughout his career — the music.

On his records, Maus capitalizes on the true characteristics of synth-core music. He achieves this by using modular synthesizers loaded with presets to mimic the synth tones predominate in ’80s pop music. Maus’ music, for lack of a better word, is spooky. His vocals are emblematic of Gregorian chants with heavily concentrated reverb on his microphone.

Amidst the gloomy chaos of his vocals and simplistic lyrics, sequenced electronic drum machines guide the way through the metaphorical tunnel of his musical inner-workings. If broken down further, Maus’ music can be categorized into the sect of “grave wave,” a subsection of lo-fi synth-pop with a ghoulish twist. In other words, “Witch House.”

Maus’ songs at the Denver show hit home hard. In looking at the full scope of the past year, his track “Keep Pushing On” offers a unique perspective into why Maus may have considered getting back on the road. Performing is comfortable for him and an escape from the horrors of reality. The opening track of the evening, “My Whole World’s Coming Apart,” reflected this perfectly with a line repeated throughout in which Maus states, “And this is my nightmare.”

Maus continued his set to follow a collection of songs from all throughout his discography. Based on the energy in the audience, his 2007 track “Rights For Gays” proved to be a fan favorite. After each track, Maus would queue up the next, leaving him no time to rest or talk with the audience. The evening came to a close following an emotional rendition of “And Heaven Turned Her Weeping,” where Maus seemed to be on the verge of breakdown throughout the whole song.

He then wrapped the show up with his song “Pets,” where he repeats “Your pets are gonna die” throughout the whole track. He then left the stage abruptly, ending his set.

Maus is unique in a sense that he doesn’t cater his show to what size the audience is. Maus has gone from playing to thousands at music festivals to a crowd less than a hundred people, like the Moon Room show, and his performance energy appears to be the same at both.

Maus will continue to tour into March of 2019. You can view the setlist from the Denver gig here.