Happy 500th, Folsom Field: A look back at the history of a great venue 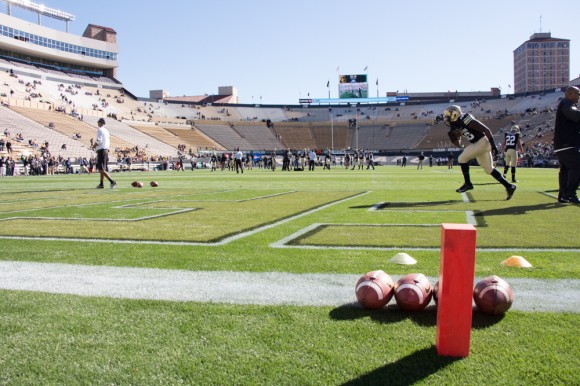 The CU Buffs football team warms up before a game during the fall 2014 season on Folsom Field. (Gray Bender/CU Independent)

The Colorado Buffaloes’ final home game of the 2018 season on Saturday will mark a pretty big milestone at Boulder’s scenic stadium.

Folsom Field has stood majestically at the foot of the Flatirons and at the center of CU’s campus for 94 years now. On Saturday, the field will host its 500th football game.

Many consider the stadium to be among the best in college football, and the Buffaloes that have played there have enjoyed a pretty successful home-field advantage. Entering game No. 500, the Buffs hold a 315-174-10 (.631) all-time record in Folsom’s friendly confines.

“I think it’s the best setting,” said Darian Hagan, who spent plenty of time on the field as quarterback for the Buffs from 1988-91 and now serves as the team’s running backs/ assistant coach. “Not only because of the mountains and it’s majestic, but the feeling you get. I think we have the best mascot, I think we got the best venue.”

In 1989, Hagan became one of just six players in the NCAA’s Division I to throw for 1,000-plus yards and rush for 1,000-plus in one season. Many of his best games were at Folsom. He was also the starting quarterback when Colorado won the national championship in 1990.

“Traditionally, we’ve been a very good program,” added Hagan. “When you come out and run behind the buffalo, just [knowing that] tradition, it’s an unbelievable feeling. You have a hell of a sense of pride when you run out there and walk out on to Folsom.”

Folsom has been a source of pride for many Buffaloes and Boulderites since the university broke ground on the field on Jan. 14, 1924. Memories and great moments have been made there ever since.

When the stadium hosted its first game on Oct. 11, 1924, a 39-0 rout of Regis College, it was then referred to simply as Colorado Stadium.

The old Colorado Stadium wasn’t renamed until 1944, following legendary university coach Frederick Folsom’s death. In addition, 24th Street, which leads to the field, was also renamed to Folsom Street in his namesake.

Folsom himself spent a good deal of time coaching here in Colorado. The late coach led the Buffaloes over three separate stints, spanning a total of 15 years. From 1895-99, 1901-02 and then in 1908-15, Folsom manned the helm at CU. In total, he sported a 77-23-2 record while coaching Colorado.

When the stadium first opened in ‘24, its California redwood bleachers sat roughly 26,000 people, which were equally divided into 22 sections. It is the exact same setup that comprises the lower bowl to this very day.

As the demand for football increased throughout the years, a second deck was added in 1956 to the now-named Folsom Field. The deck was only added to two-thirds of the stadium so as to not obscure the scenic view of the Flatirons. The new arrangement increased capacity to right around 45,000.

“Soon as you walk out of the tunnel, you see those Flatirons behind the stadium, that’s probably one of the coolest things,” said senior linebacker Rick Gamboa, who will play one final time at Folsom Field on Saturday in game No. 500. “You usually don’t see that in many stadiums.”

More improvements were added between 1967-68. The running track that used to lay around the perimeter of the field was removed to make room for the team’s locker room facility on the north side of the grass. This boosted the capacity by 6,000. In 1968, the six-level press box facility was added on the west side of the stadium.

Another great addition was made in 1967. It’s probably Folsom Field’s greatest attribute, and what many may call the greatest tradition in all of sports.

The running of Ralphie, the university’s live mascot, at the start of each game took place for the first time on Sept. 16, 1967. With the team winning 27-7 over Baylor after Ralphie’s first run, the tradition has continued ever since.

When she welcomes the Buffs on the field one last time in game No. 500 at Folsom, the five separate Ralphies that have ran over the years will have collectively charged the field a total of 294 times since the tradition began 51 years ago.

Though arguably the best upgrade in the stadium’s 94-year tenure, Ralphie certainly wasn’t the last.

By 1976, Folsom Field began to take shape to the field that we’ve all come to know and love today. The iconic gold and silver bleachers that fill the stadium were added, replacing the original wooden seats. After the renovations, Folsom Field could now sit 52,005, roughly the capacity that it holds today.

The neighboring Dal Ward Center was added in 1991, and corporate boxes and suites were finished in August of 2003, boosting the capacity to an all-time high of 53,750. Also finished that year was “BuffVision,” Folsom’s video boards on the north and south ends, which have since been updated in 2012 to the HD boards you see there today.

After some maintenance and removal of seats with “obstructed views” throughout the years, Folsom Field now sits 50,183.

While old Folsom has seen its fair share of changes throughout the years, the memories made there will not change for the players who have called it home during their time there.

“One of my favorite memories is probably 2016, beating Utah out here and winning the Pac-12 South title,” said Gamboa. “I helped force the fumble to help [Kenneth Olugbode] score a touchdown, it was kind of the game-winning touchdown of the game. It gave us the lead in the game.”

“Seeing the stadium, the whole crowd rushed the field, and then going back to the locker room, everybody was happy, everybody was celebrating about what we just accomplished,” added Gamboa. “Just looking at everyone’s face, knowing where we came from, from my first year in 2014 to 2016 and that season. That’ll always be my favorite memory at Folsom.”

Coincidentally, it’ll be Gamboa who’ll celebrate his final game and the milestone 500th at Folsom Field against that very same Utah team.

“I’ve been thinking about it the last couple of weeks,” said Gamboa of playing in his final game at home. “It wasn’t until [recently] where I really thought about it, knowing I only have one game left at Folsom. It’s like my 24th game at Folsom. Just all the memories, all the great wins, even the heartbreaking losses; all those times going out on Folsom.”

As a matter of fact, it’ll be his 25th game at Folsom, the most of any active player at CU to play on the field.

“I know I’ll probably get emotional going out there for senior night with everything running through my head, all the memories, all the teammates I’ve played with, all the coaches, everything,” said Gamboa. “I’m going to have fun and enjoy my last game at Folsom.”

Game No. 500 at Folsom Field will have some big implications for Gamboa and the rest of this year’s Buffs team. Not only would a win provide one final good memory for the 18 seniors who will play their last game in Boulder, but a win would mean the Buffs could clinch a bowl game for just the second time in 11 years.

“I think it’d be huge to leave Folsom with a win,” Gamboa concluded. “Last time I step out there, leaving with a win would be huge, getting that sixth win. I know I’d be real excited after the game if we win the game, just knowing when I walk off the field that the last time that I played there I won my last game.”

It may be Gamboa’s and many others’ final game at Folsom Field, but it certainly won’t be the last game at Boulder’s fine sporting venue. Happy 500th, Folsom Field. Here’s to 500 more.