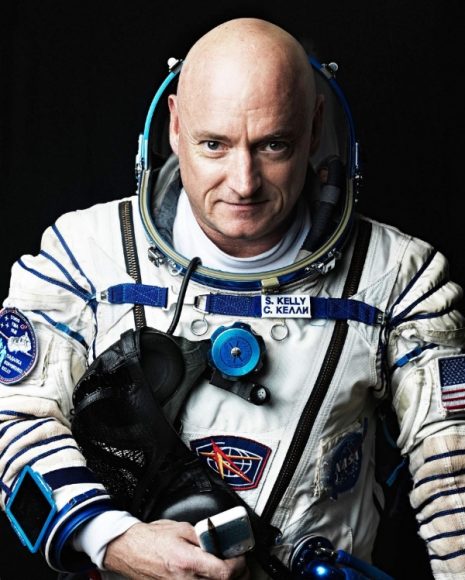 On Wednesday night, the University of Colorado Boulder’s Distinguished Speakers Board welcomed American astronaut Captain Scott Kelly to Macky Auditorium. Kelly amused and inspired audience members young and old with humorous accounts from his year on the International Space Station and life back on Earth.

Kelly’s path to space travel was unlikely and started slow. He described 13 years of schooling wasted staring out the window thinking none of it mattered.

A lazy college student, skipping class and barely passing, one day Kelly came across a book that changed his life. He became obsessed and inspired by Tom Wolfe’s The Right Stuff.

Reading about the original astronauts in space, he related to every man in the book, except for the fact that his grades were horrible. But he knew if he could make that change, he had a chance at an exciting future.

“So I did one of the hardest things I ever had to do and that was to teach myself how to pay attention and study,” Kelly said. “It took a while but eventually I got the hang of it.”

Eventually Kelly changed colleges and majors, graduated with a commission to the U.S. Navy and a slot in flight school. He was one of the worst pilots at the U.S. Naval Test Pilot School but he was determined to succeed.

“How good you are when you start something is really no reflection on how good you can become with a lot of hard work and just never ever giving up,” Kelly said.

His biggest challenge in flying was that he was too comfortable with just flying alright. He needed to learn to constantly be making positive corrections. Kelly used this lesson to succeed in flight school and eventually get his career at NASA. He applies it to his personal life as well.

“If we’re not trying to make things at least a little bit better, if we’re not always questioning the status quo, things are going to get worse,” Kelly said.

With his new outlook, Kelly set his gaze upwards. 18 years after first reading The Right Stuff, Kelly headed into space for the first time.

He described the immense fear that consumed him as he watched the launch countdown. At nine minutes, the reality of launching into space became more real than ever.

“That’s the moment you think, ‘man, this is really stupid,’” Kelly said.

But it was far too late to back down. So Kelly let the shuttle launch him out of the atmosphere. Terrified, he didn’t look out the window for eight and a half minutes. Eyes on the control panel, he focused on what he could control and ignored everything else.

This, Kelly joked, was when his attention deficit came in handy.

A decade later, after two successful trips into space, Kelly launched into orbit for a third and final time. This time he and two Russian astronauts would spend 340 days on the International Space Station.

They offered themselves as experiments on how the human body reacts to spending an extended period of time in space. For nearly one year, NASA and the Russian space program, Roscosmos, tracked the physical, physiological and psychological health.

NASA also tested Kelly’s identical twin brother, Mark Kelly, for genetic changes that occurred in space. Kelly said they went through the same tests, but in space he had “the cool job.”

Even talking about about science and research, Kelly kept audience members laughing throughout the night.

“It was really great to hear him be humorous about all the antics growing up and becoming an astronaut,” said Austin Braun, who from the College of Engineering and Applied Sciences this past May. “I’m leaving feeling inspired.”

On a more serious note, Kelly left the audience with a piece of valuable insight.

“You certainly will never be successful at anything if you don’t try,” he said.

“Anyone can be an astronaut, he didn’t come from a traditional ‘smart’ school background so that was awesome to hear, and encouraging too for those students who struggle but aspire to big dreams,” said Kaitlin Engelbert, an astronomy student at CU.