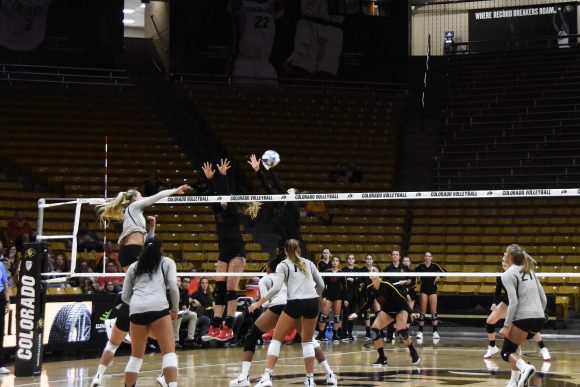 On Sunday, Colorado Buffaloes women’s volleyball squad faced off against the No. 14 USC Trojans at the CU Events Center in the Buffs’ second Pac-12 Conference game of the season.

Neither team led by more than two points early on in the set. 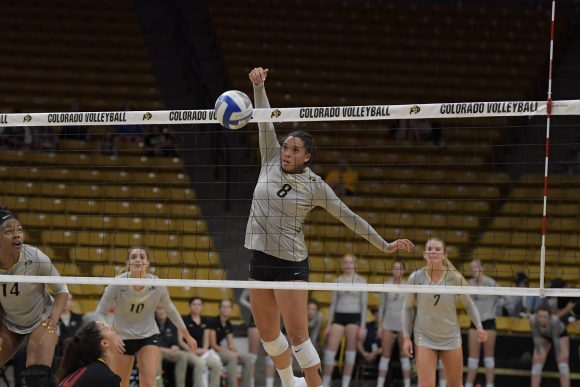 A kill by junior outside hitter Justine Spann tied the game at 10, but after that the Buffs’ spikes started to lose their accuracy slightly as attempted kills from outside hitters Anyse Smith and senior Alexa Smith went just wide of the paint.

From there, the Trojans scored six straight points and outscored the Buffs 11-4 down the stretch in the set. CU’s inaccuracy at the tail end of the first set along with USC matching the Buffs’ up-front prowess led to the Trojans pulling away, eventually taking the first set 25-18.

Alexa Smith was able to find her spots again. She got the Buffs off to a 1-0 lead in the second set with an accurate spike down the line. The Trojans battled back though, and despite a couple mistakes, grabbed a 7-6 lead after a kill from USC middle blocker Jasmine Gross.

Gross was very effective coming across the net and hitting across her body, as a couple of her kills were so fast that the Buffs’ defense could not handle them, with multiple balls bouncing off the hands of defenders and into the stands.

After a long rally that ended in another kill from Alexa Smith, the Buffs eventually took the lead in the set.

The majority of second set was neck and neck. The Buffs and Trojans traded points back and forth, either on vicious kills or mistakes by the other team.

Following a timeout, and with the score 20-17, the Buffs won a sequence that lasted at least a minute to give them a four-point lead late in the set.

A kill by USC’s Khalia Lanier eventually brought the Trojans to within one, with the Buffs up 21-20. In the next sequence, Alexa Smith was blocked twice and the Trojans eventually won the point.

Later, with USC up 24-22 and threatening to take the set, Lanier made a critical service error that breathed life back in to the Buffs.

Shortly thereafter, Gross came across the net with another powerful spike that would have ended the set, but a great dig by Buffs freshman setter Jenna Ewert kept the ball alive and eventually set up an equally venomous spike from Anyse Smith, who was able to put the point away and stave off the Trojans, tying the set up at 25.

A kill on the next point by Spann and then a ball handling error from USC’s Raquel Lazaro on the following point sealed the deal, and the Buffs took set two in extra points, 27-25.

With a set win and momentum to build on, the CU Events Center was shaking at the beginning of the third set.

The third set was equally competitive, with both teams trading blows back and forth. Although the Trojans took an early 5-2 advantage, from there, the Buffs hunkered down and kept things within a point or two.

Southern Cal threatened to run away with the set after taking a 16-11 lead. But five straight kills from the Buffs, with three coming from Ewert, kept CU alive.

Unfortunately for the Buffs, the momentum did not last. USC scored seven of the final 10 points in the set, winning it with comfort, 25-19.

Colorado came out in the fourth set with nothing to lose, and after jumping out to a 13-7 lead, USC called timeout. After both teams returned to the court, the Buffs started to run away with the set, looking poised to take the set with ease and sporting a 17-9 lead. The Trojans kept clawing back however, scoring six straight points to bring them back within striking distance.

The Buffs answered with four straight points of their own and eventually went on to win the set after senior middle blocker Naghede Abu sent a stinger over the net, ending the set in a 25-21 CU victory.

After going to a thrilling five sets with Utah on Wednesday, the Buffs were back at it, in another shortened fifth set against another ranked Pac-12 foe.

The Trojans came out firing in set five, taking an early 3-0 lead. A kill from Alexa Smith off a great set from sophomore libero Brynna DeLuzio built some momentum for the Buffs, as the next three Buffs points all came from Smith kills.

With the score tied 5-5, it was anybody’s game, and USC snatched it right from under the Buffs. The Trojans rattled off five straight points and eventually won the short fifth set, 15-10.

In the end, the firepower of USC proved to be too relentless for the Buffs.

“USC has got a lot of weapons,” head coach Jesse Mahoney said. “It’s tough to get them out of system where they can’t take swings. We had too many opportunities where we didn’t get true swings.”

Alexa Smith did all she could, participating in both offense and defense on essentially every point and finishing with a team-high 18 kills to go along with 15 digs.

The other Smith for the Buffs, Anyse Smith, also came to play. She added 13 kills of her own, despite being subbed in and out countless times during the match. It’s a shame volleyball doesn’t award style points of any kind, because Smith would be racking them up like no one else.

Smith looks like she’s wearing moon shoes when she goes up for a spike, and her swing certainly intimidated the Trojans on multiple occasions. Smith, a redshirt sophomore, is breaking out this season, boasting 117 kills thus far — a mark good enough for third best on the team. 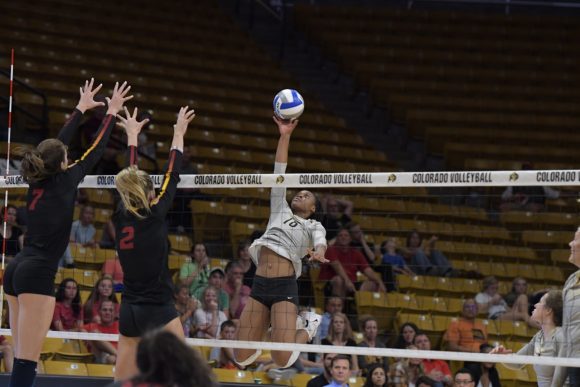 The Smith duo doesn’t deserve all the credit though. CU’s setters and backline played a great game as well. Ewert and DeLuzio both saw their fair share of playing time and were key contributors in the Buffs’ offensive scheme.

Ewert had 20 assists, while DeLuzio tacked on another 24. They were the backbone of the Colorado attack, and at least part of the reason CU’s outside hitters looked so good.

The Buffaloes now sit at 9-4 on the season. With tough conference match-ups under their belt, the Buffs will look to improve and turn close losses into hard-won victories.

“Were getting better every time out,” Mahoney said after the game. “We have some more ceiling to get to by the end of the season.”

With possibly the toughest two games on their schedule out of the way, the Buffs travel out West next weekend, where they’ll take on Washington on Friday and Washington State on Sunday. 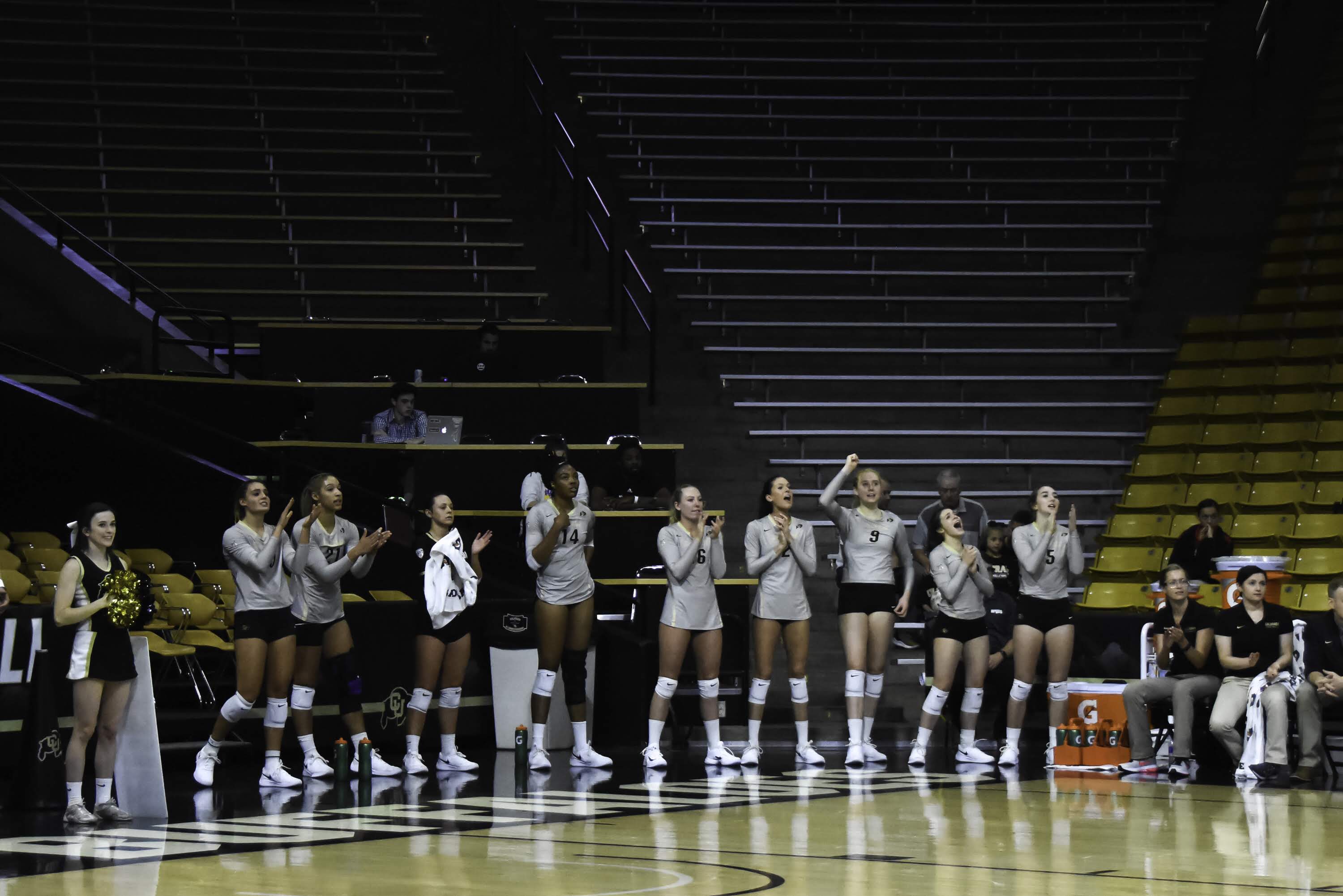 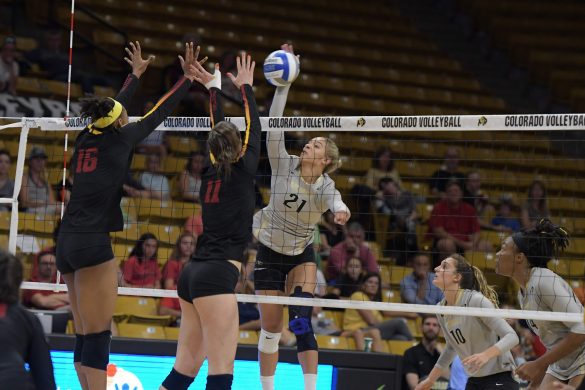 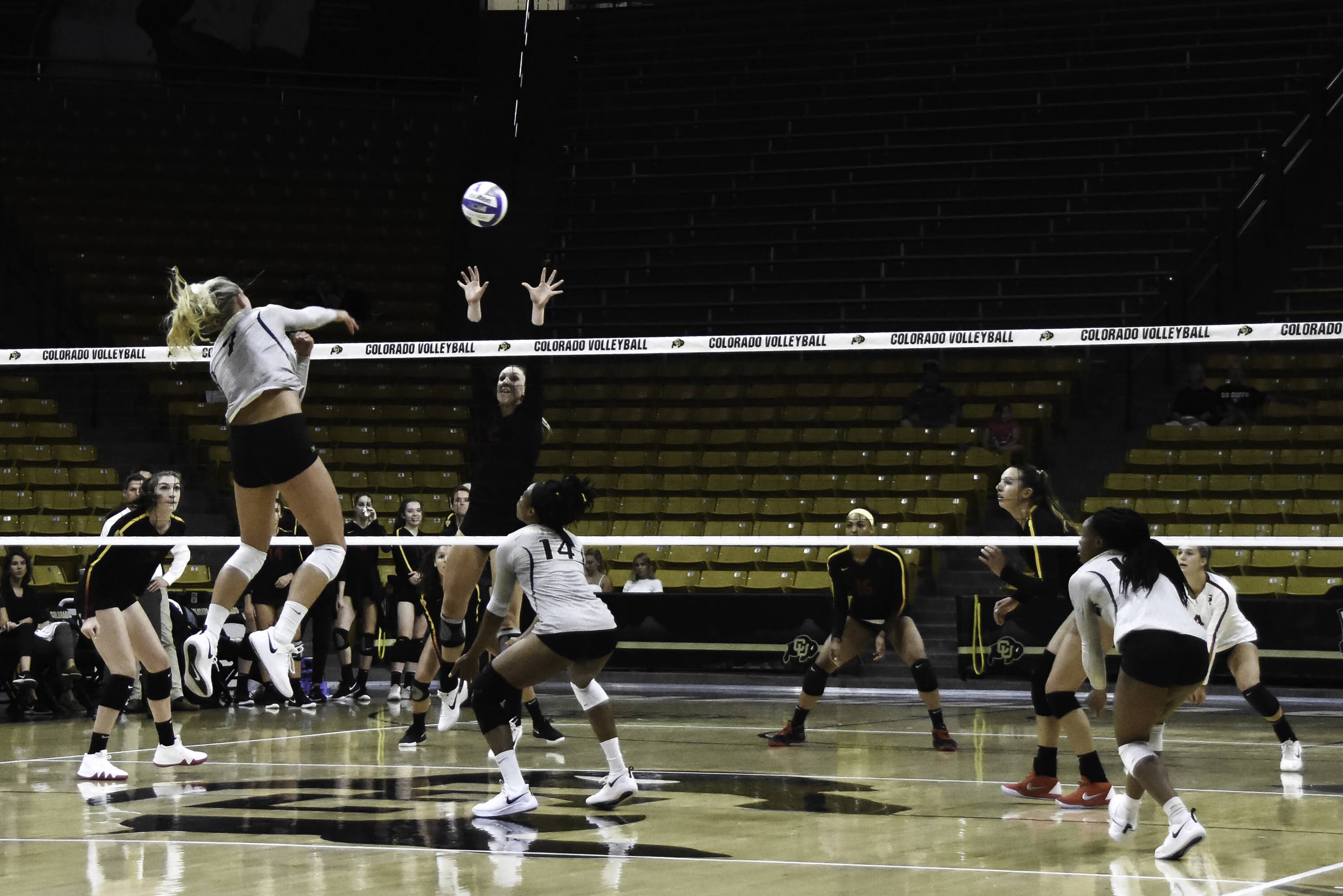 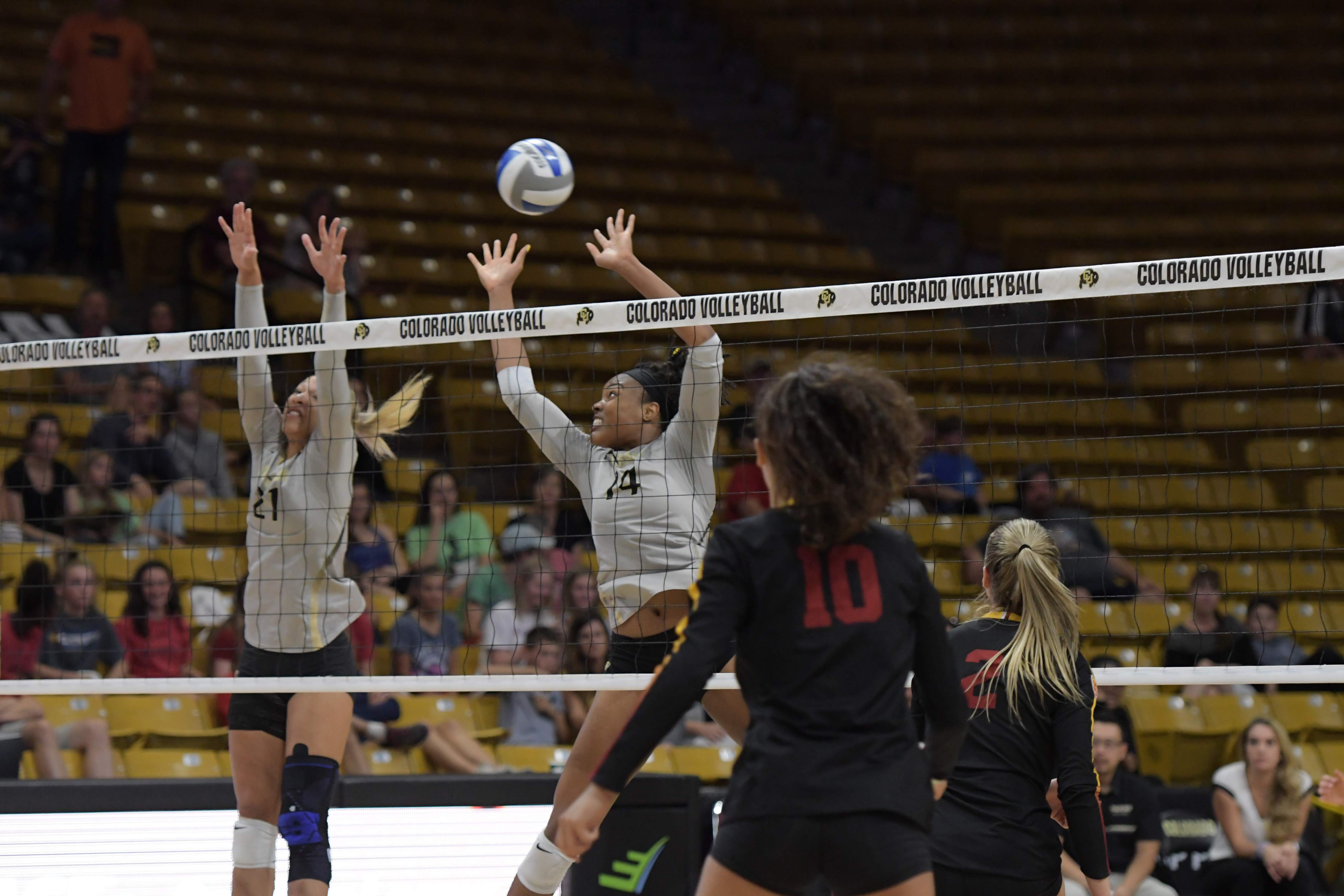 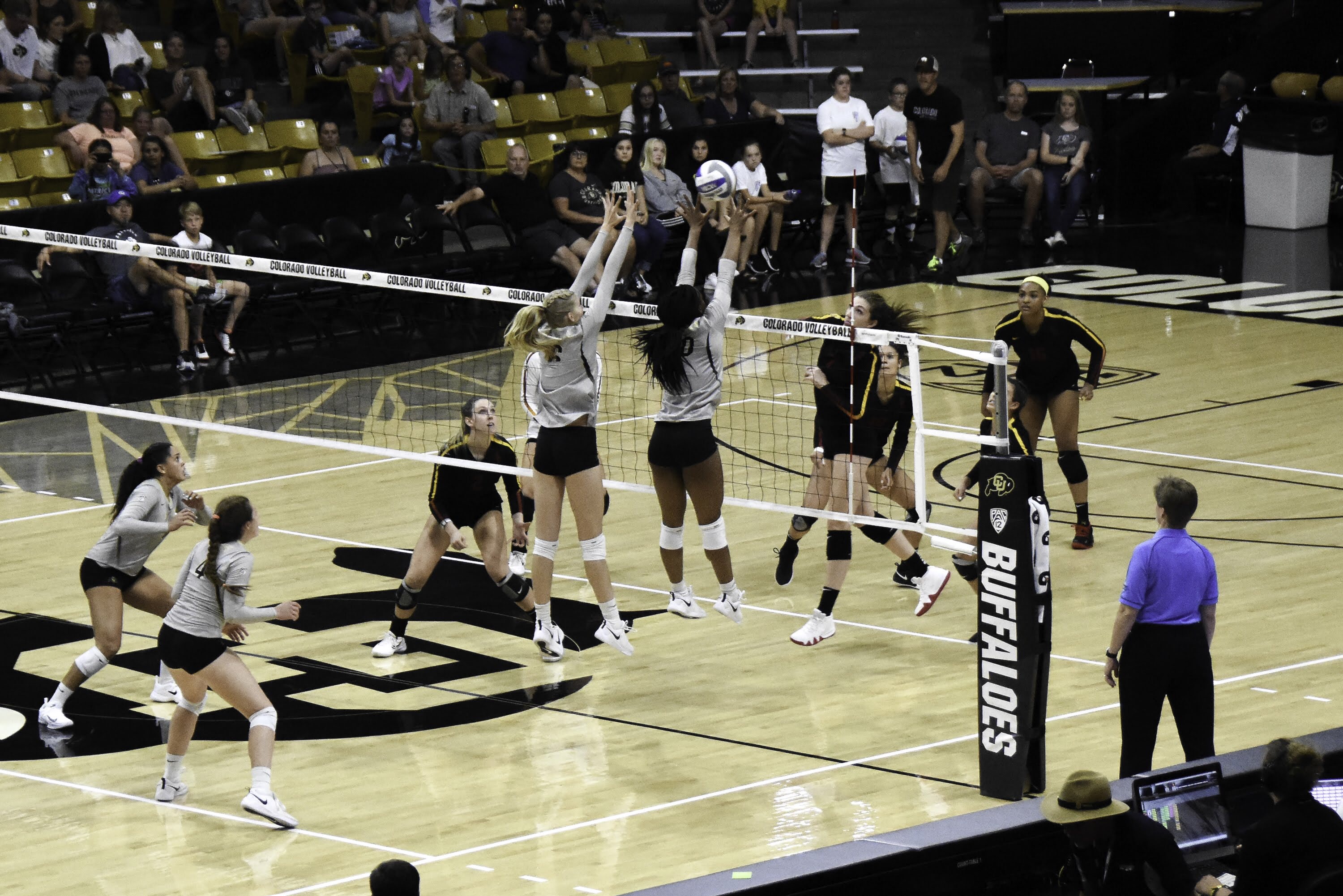 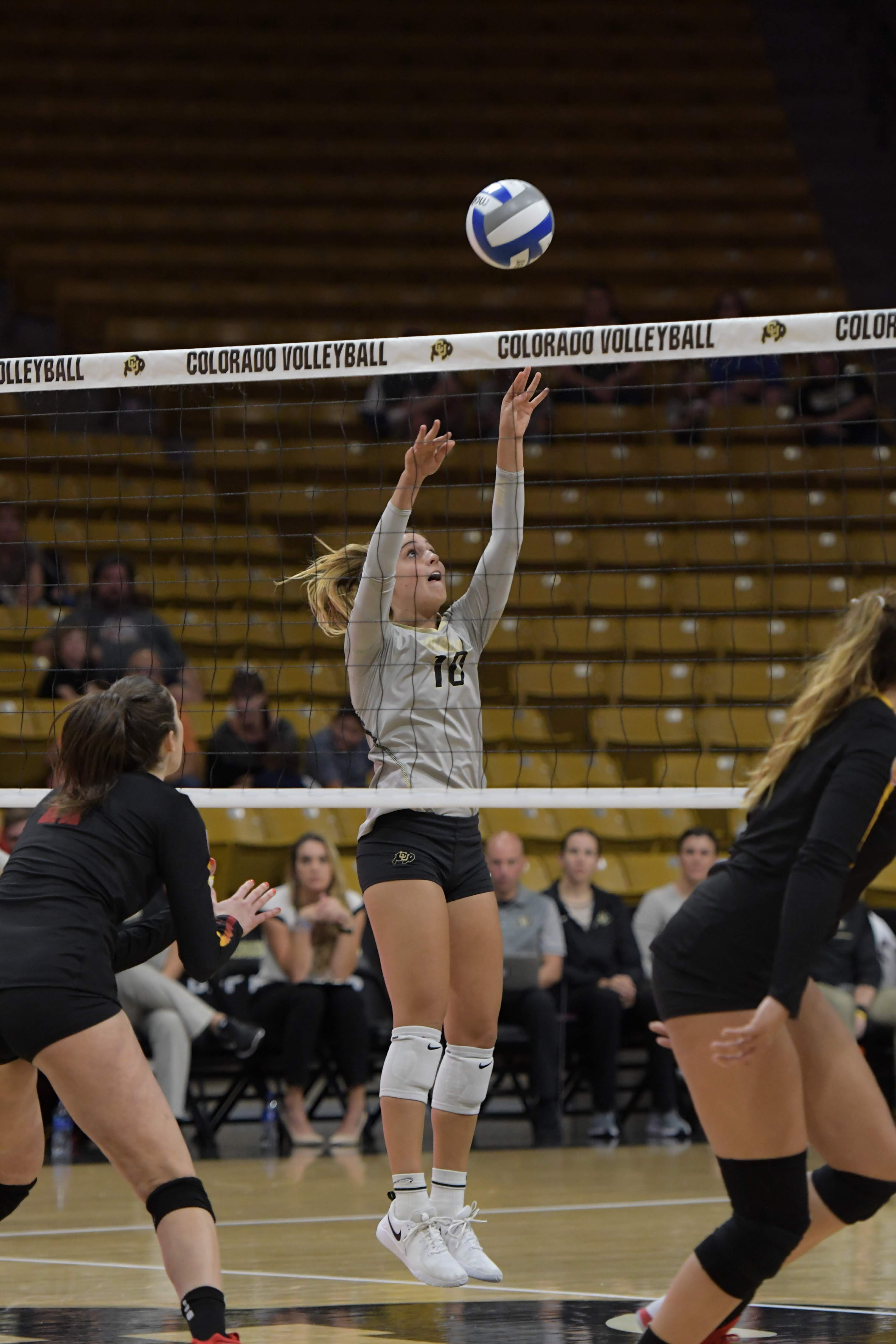 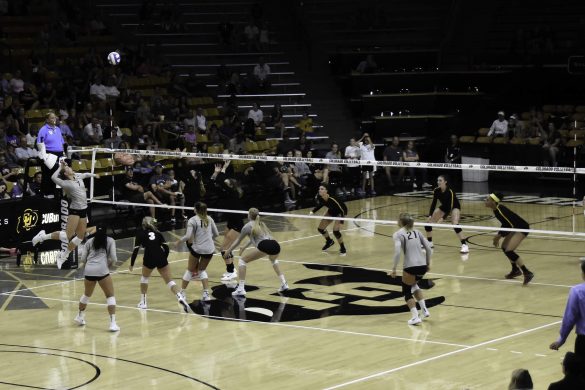 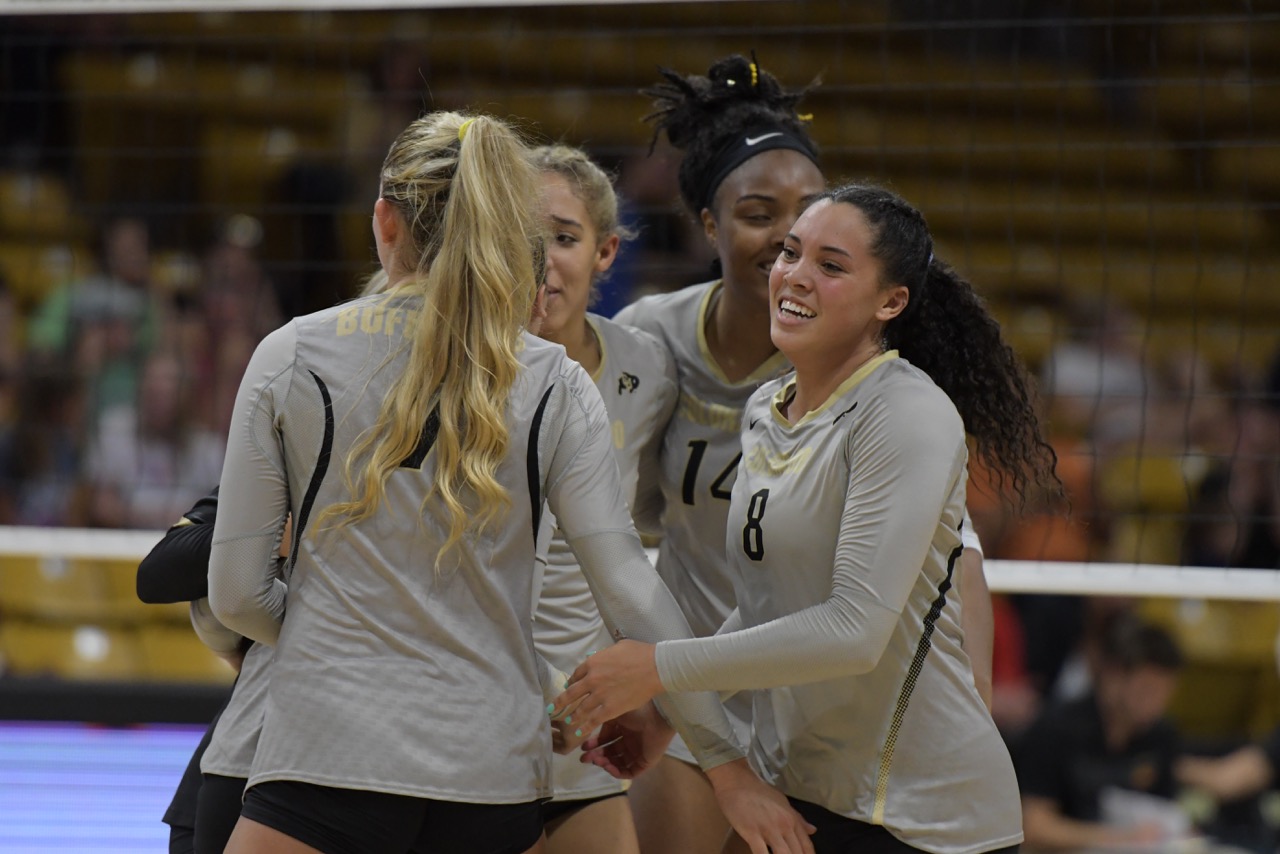 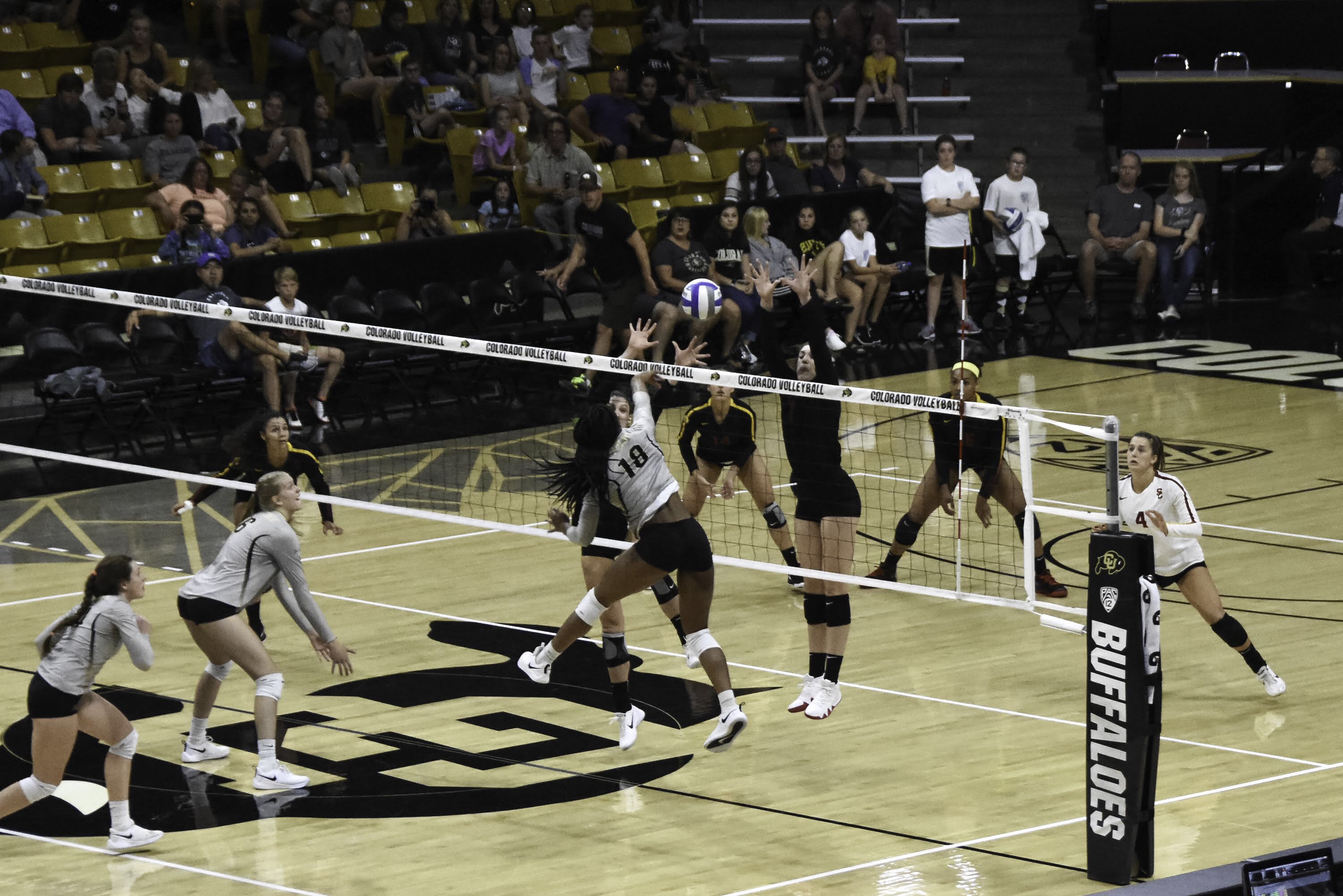