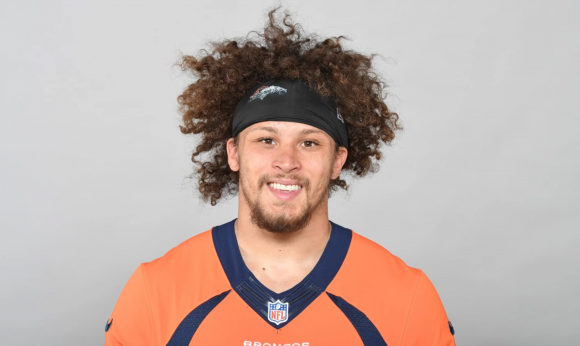 Through the first two weeks of the 2018 season, former Buffalo and current Broncos rookie tailback Philip Lindsay quickly etched his name into the NFL record books.

After the Broncos’ week 2 win over the Raiders, Lindsay became the first undrafted free agent to total 100-plus scrimmage yards in each of his first two professional games.

Lindsay, who was not touted as a high level prospect coming out of CU, failed to secure an invite to the NFL combine. Despite being the all-time leader in scrimmage yards and all-purpose yards for the Buffs, the 5-foot-8 inch tall athlete was undervalued by NFL scouts due to his size.

After going undrafted, Lindsay was destined to be enshrined in the record books at CU, but questions remained regarding his ability to transition to the pros.

That’s not to say that his former teammates at CU didn’t have confidence in him.

“He’s never been afraid to go against someone that’s bigger or faster or stronger than him,” said Colorado senior tailback and Lindsay’s immediate successor Kyle Evans. “[It’s] his work ethic. He has a dog mentality, which is an intangible that not a lot of guys have.”

Perhaps John Elway shared those sentiments, leading to his calling of Lindsay and ultimately, an invite to the Broncos’ preseason summer camp. Lindsay, who’s from Aurora, Colorado and attended Denver South High School as a major Broncos fan, got his chance to compete for a roster spot with his hometown team.

At camp, Lindsay quickly showed what he could do in practice and earned high praise from his coaches and teammates, proving he belonged.

“What he’s done hasn’t been just because he’s a local kid. He has earned his right to be here,” Broncos head coach Vance Joseph said of Lindsay back in August.

Lindsay saw plenty of the field in the preseason, scoring a touchdown in his first game against the Vikings. He made the most of his touches and also returned kickoffs. Lindsay’s play in the preseason was so impressive that Joseph rested him for the Broncos’ fourth and final preseason game — a game usually reserved for late round picks, undrafted free agents, and guys on the fringe of making the 53-man roster.

Lindsay wanted to wear the number 30, the number of Broncos legend Terrell Davis, and even personally asked the two-time Super Bowl champ for his approval.

Davis mentioned talking on the phone with Lindsay about it: “I just got off the phone with Broncos rookie RB Phillip Lindsay who ask for my permission to rock the number 30. Permission granted. Outstanding young man! It was time to dust off the ole three O. Good luck.”

And with that, Lindsay’s NFL journey was ready to begin.

In week 1 of the NFL season, Lindsay showed his preseason success was no fluke, racking up 102 yards from scrimmage along with his first NFL score, a 29-yard touchdown through the air from Broncos’ quarterback Case Keenum.

Week 2 against the Raiders saw Lindsay tally 107 rushing yards on just 14 carries, including a 53-yard run in the first quarter. Through two NFL games, Lindsay’s yard per carry average was 6.1.

After week 2, he had more rushing yards than No. 2 overall pick Saquon Barkley and was first among all rookies in rushing yards. That figure was turning heads considering a total of 20 running backs were drafted in the 2018 NFL Draft.

His former teammates and coaches at CU were quick to congratulate their old comrade. 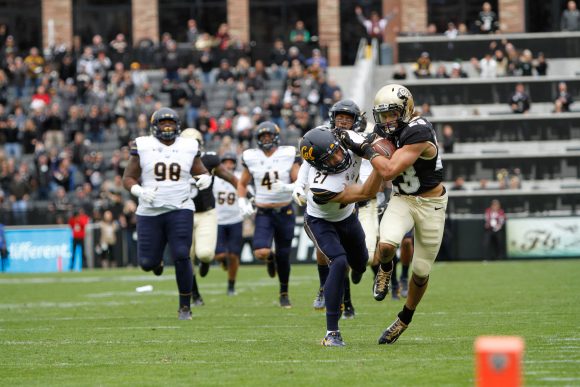 Buffs defensive graduate assistant coach Chidera Uzo-Diribe offered some congratulations to Lindsay in a tweet: “They measured everything but your heart! Keep proving the doubters wrong Philthy!”

Lindsay will have to share the Broncos backfield with former Oregon standout Royce Freeman and third year Bronco Devontae Booker, but with his early success, he has already supplanted Booker on the depth chart.

Freeman was announced as the starter to begin the season, but both he and Lindsay saw 15 carries in week 1 against the Seahawks. In week 2, Lindsay actually saw six more carries than Freeman did.

“I’ve talked to Phil a number of times and all he talks about is how he stays true to himself and does what he does best, and that’s just work hard and play hard,” Evans said.

In week 3 vs. the Ravens, Lindsay had four touches for 20 yards but was controversially ejected in the first quarter after some physical play that saw Lindsay throw punches after jumping on a pile of players attempting to recover a Keenum fumble.

Lindsay, despite being undersized, can run in between the tackles, catch passes out of the backfield and make an impact on special teams as a returner or as a gunner on punts. Lindsay himself said it best when he said he would help the team in any way he could, and be the team’s “spark plug.” 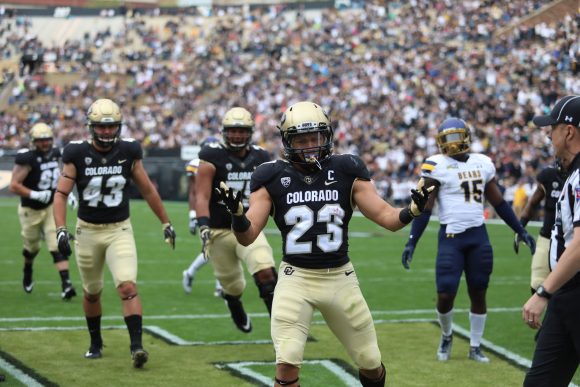 Phillip Lindsay poses for the camera after scoring a touchdown to put the Buffs in the lead. Sept. 16, 2017 (Kirra Cobb McGowin/CUIndependent)

“[He’s a] pitbull man, he’s a feisty son of a gun,” said Garett Bolles, a second-year offensive tackle with the Broncos. “[When] things aren’t going right, he’s in there cheering us on and brings us that juice.”

Lindsay, humble as ever, said on the air to ESPN2 morning radio hosts Golic and Wingo, “I’m just doing my part.”

Off the field, Lindsay participates in the Broncos Futures Program, which aims at helping younger athletes take the next step in their football career, allowing current and former Broncos to make an impact on aspiring athlete’s lives. Lindsay, who participated in the program himself as a kid, knows all too well what kind of impact the program can have.

After tearing his ACL to end his senior year at South High School, Lindsay got a call from then-Broncos running back Willis McGahee, who suffered a similar injury.

“To be able to see what he did after that brutal knee injury, it felt good to get a call the day after surgery,” Lindsay said. “And now I’m sitting here in the same shoes he was in as a Denver Bronco.”

Now, as Nicki Jhabvala, writer for The Athletic, put it, Lindsay has “completed the circle of football life in Colorado.” He’s gone from participating in the Futures program as a middle-schooler to playing at Denver South, then for CU Boulder and now the Broncos.

Lindsay is making an unprecedented rise in the NFL, even after being so overlooked on NFL draft boards back in April. Lindsay is trying to follow in the footsteps of other notable undrafted players like Kurt Warner, Priest Holmes, Rod Smith and fellow Bronco Chris Harris Jr.

Through a few weeks of his young NFL career, Lindsay’s story — from undrafted free agent to hometown star on the rise — has proven many of his doubters wrong early in the 2018 season.