Opinion: If you really hate fake news, here’s a solution 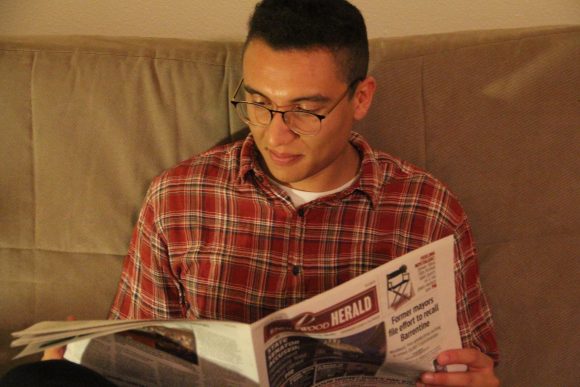 Ellis Arnold reads an issue of the Englewood Herald. (Courtesy of Ellis Arnold)

The CU Independent has been publishing editorials and student testimonials as part of the Save Student Newsrooms campaign. To close out our series, former CU Independent editor in chief and class of ’17 journalism graduate Ellis Arnold shares his thoughts on the state of journalism:

You don’t have to tell me. I know: The news media have turned on you.

They’ve turned on America. They’ve abandoned their ideals, their morals, their sham of “objectivity.” Once held so tight by journalists and readers alike, the trust is now gone. That familiar face on the nightly news left long ago, only to be replaced by someone spoon-feeding you made-up tales about the president.

That paper you loved to splay open in the morning now comes chock-full of lies printed by liberal editors. Where can you turn? Where can we all turn?

You may not want to, but you should turn to student newsrooms.

I’m sure you’re thinking: newsrooms at universities? Newsrooms at the factories that churn out politically correct snowflakes across the land?

Yes. And here’s why.

You may feel that the mainstream media — doubtlessly a combination of CNN, The New York Times, The Washington Post and maybe a bit of MSNBC sprinkled in — have been pushing liberal slime into your world.

You may be forgetting that The Wall Street Journal is one of the most circulated newspapers in the country, and that Fox News, well, exists, but let’s stay on track.

Because I’ll give you this, my anti-media friend: Sometimes, CNN does spoon-feed you opinions. That’s because it’s an opinion-fueled machine during primetime television. Elsewhere — and, strangely, in its online written coverage — you’ll find some actual, credible, hard news.

Watch the Sunday talk shows. Read your local outlets — don’t just go straight to the opinion pages. Read the cover story, and the page 3 story and the page 33 story. You might be surprised.

Part of the truth is, journalists have utterly failed in distinguishing reporting from opinion. That’s on all of us. Somewhere along the way, editors either consciously or tacitly decided that the old standard that readers (hopefully) understood — that News runs on page 1 and Opinion runs on page 15 — somehow didn’t need to be defended in the era of cable news, talk radio and the internet.

Forget explaining that editorial boards at papers don’t mingle with news writers — news and opinions are side-by-side on every major news website’s front page. Don Lemon is leading his evening TV show by proclaiming President Donald Trump is a racist. Late-night talk shows ridicule Republicans, and thus, mainstream outlets get to parrot Stephen Colbert as if they’re, like, just quoting him, man.

Newsrooms didn’t rise up to the unfortunate challenge — or just didn’t notice — that they needed to work harder in explaining the difference between news and opinion, and make sure readers know that just because one news outlet blurs the lines doesn’t mean they all do.

People would get the difference, right?

They didn’t. And without journalists making the effort to draw that line, there may as well be none. When you have anti-Trump opinion columns lining your screen while news that “objectively” covers him sits just two inches away, why would anyone assume differently?

That said, readers and watchers have also been too quick to swallow Fox News-esque arguments about how news outlets push a liberal agenda. If you dig into the straight-news sections of any credible outlet, you’ll find facts, reported without tone or slant.

Just because a Denver Post editorial says a state senator should resign — or shouldn’t — over sexual harassment allegations doesn’t mean that influences the way the Post’s reporters cover the story.

But that’s a hard pill to sell to some people these days, and I can’t say I blame them.

And that’s why I tell you, my disenfranchised friend: support student newsrooms, financially and otherwise. Make sure journalism faculty, even, know what your complaints are with the current state of media.

Because no matter what you think of college students, they’re the journalists who are up next. If you think your government, your party or your issues aren’t being fairly covered, don’t just take that to the comment strings on Facebook. Take that to the universities. Send that message to student newsrooms — give them your op-eds.

But remember: The hallmark of good criticism is to actually understand what you’re criticizing. The blame doesn’t entirely lie with journalists for failing to push back against the CNN-ification of the media — it’s also on us for gravitating toward those shows and shunning the good work in print, radio and yes, even on other TV outlets, that’s been at our feet the whole time. If you really think mainstream media are shoving fake news down your throat, I recommend you read a little closer. A little less Huffington Post, a little more Associated Press.

Because the recent uprising in anti-mainstream media has given us nothing but the likes of Breitbart News — and I do recognize the oxymoron — and InfoWars and whatever other charlatans are claiming to rail against the so-called lies to bring you the real Truth.

It’s going to take a generational shift to bridge the gap. Student journalists — I was one just a year ago — are growing up in a world where reporters face steep suspicion before an audience even reads their stories. Today’s students, who will report in small towns at starter jobs across the country, need to know they have to work twice as hard as before to earn the public’s trust.

And if the public wants real news, hold up your end of the bargain. Do the work. Read past your assumptions of what mainstream news is — yes, even at the student level — and be part of the dialogue that turns the fake-news divide around in this country. Don’t shy away from a story just because it isn’t flattering for your worldview.

Working at the CU Independent taught me how to be fair. It taught me how to spend more time fact-checking than worrying about how good my words sound. We put together giant coverage plans for the 2016 election, and through it all, we worked to make sure we gave it to readers straight.

Student newsrooms also face their own behemoths — school administrations that step out of line and bend the truth — and those deserve dogged coverage, too.

But the truth is that one day, the mainstream media is going to be made up almost entirely of the people sitting in student newsrooms right now. And if you want integrity in the future of your media, start supporting them. Bridge that gap.

And maybe — just maybe — when someone cries “fake news,” we can all agree on what that means.

Ellis Arnold is a former CU Independent editor in chief and a reporter for the Englewood Herald and Centennial Citizen newspapers at Colorado Community Media, also covering the state-politics beat. Follow him on Twitter @ArnoldEllis_.