Technology literacy highlighted as a powerful tool at CWA 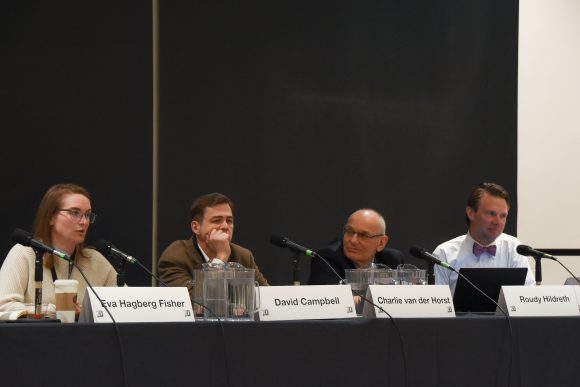 The 70th annual Conference on World Affairs brought varied discussion from speakers on technology trends. Artificial intelligence (AI), net neutrality and blockchain were among some of the many topics covered.

Nearly 100 speakers from across the world were invited to speak at the week-long Conference on World Affairs, held at CU Boulder each spring. Panels focus on a range of topics, from the arts to environmental sustainability.

During the various panels, speakers noted the concern from the audience, apparent from frequent head shaking and worrying questions. Panelists used this as an opportunity to underline the importance of being technologically competent.

“People should be aware of how devices work,” said Deborah Bryant, the senior director for Open Source and Standards for Red Hat. Bryant’s comment was made at a panel focusing on the data collection of privacy issues of smart devices, like Amazon’s Alexa.

Bryant discussed the ways in which technology companies like Amazon mine information from consumers. She used the current congressional investigation into Facebook, which allowed the political consulting firm Cambridge Analytica to sell Faecbook user data, as an example of the ramifications of a self-regulated tech industry.

While Bryant was clear on her views that technology companies should be held accountable for their actions, she finds it equally important for users to know what they are signing up for.

Similar sentiments were echoed at a panel titled “Technology Gone Wild.” Heather Roff, a research scientist for Google DeepMind, encouraged the audience to learn more about the technology industry.

“We as a community have to become more technologically literate,” Roff said.

Roff and other panelists present at “Technology Gone Wild” spoke about the current and long-term effects of technology on society and economics. AI was cited several times as a prime reason for the displacement of people in the workplace. Panelists emphasized the regulation of technology as the only way to ensure the best interests of others.

However, the beneficial sides of technology were presented by panelists at “Activism vs. Apathy: When Clicking “Like” isn’t Enough.” The panel dealt with social issues and how groups form movements using social media.

Eva Hagberg Fisher, a writer and activist, used the survivors of the Parkland, Florida shooting as examples of the power of social media.

“Those kids know how to use Twitter,” Fisher said.

Fisher said she was sexually harassed as a student at Berkeley by a professor. After two years of silence, she spoke out against the university, ultimately serving as a major proponent in a change in Berkeley’s policies. For her, the ability to share her story through social media allowed for others to connect with her.

CU student Noell Videon finds social media a “huge tool” for having a voice as a student.

“A lot of people have looked at it as such a hindrance to doing anything, but shown in the Parkland shooting, it’s a huge way to involve people and get them educated,” Videon said.

The panel “Bombastic Blockchain” explored the advantages and disadvantages of emerging blockchain technology which allows for digital, decentralized ledgers and has become fundamental in the exchange of bitcoins.

Panel moderator Richard Polk posed several questions to the audience about technological terms and asked them to raise their hands if they understood the meaning. Several times, only a few audience members raised their hands.

CU student Zach Huui compared this lack of understanding to the recent Desire to Learn (d2l) migration to Canvas. Huui finds that his professors are not as engaged with the new Canvas landscape as they should be.

“That was really impactful to my studies and my grades,” said Huui. “I think that needs to be a lot better understood for the interests of the student.”

Despite varying viewpoints on the impact of technology for both good and bad purposes, panelists stressed the overall importance of technology and the internet in today’s society.

April Rinne, a speaker for Sharing Economy, spoke specifically to students on how issues like net neutrality and AI are important to be conscious of.

“Access to the internet revolutionizes,” said Rinne. “[Students] are going to be among the first generation to feel the full impact of this.”

More focus on mental health, self care at Conference...