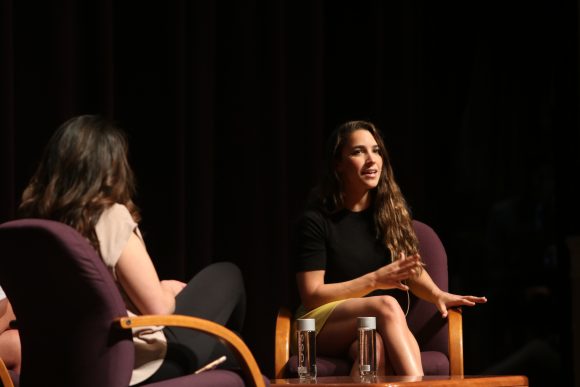 Two-time olympic captain of the U.S. gymnastics team and advocate against sexual abuse Aly Raisman spoke at the Conference on World Affairs in Macky Auditorium on Thursday.

Raisman discussed her personal history, beginning with starting gymnastics at age two to her current advocacy work for sexual abuse awareness and body positivity. She made the decision at age eight to commit fully to gymnastics, inspired by the 1996 summer Olympic team commonly called the “Magnificent Seven.”

Raisman was captain of the 2012 U.S. olympic team, often referred to as the “Fierce Five.” They were the first U.S. team to win gold since the Magnificent Seven. But Raisman said she finds even more meaning in the work she is doing now.

“Doing the right thing is better than winning a goal medal,” Raisman said.

Raisman testified in January in the trial of Larry Nassar, former doctor for USA Gymnastics and sports medicine physician at Michigan State University. She and four other members of the Fierce Five, along with 2016 gymnastics champion Simone Biles, publicly stated that Nassar had sexually abused them. More than 150 women spoke at his trial detailing how he sexually abused them, and he was ultimately sentenced to life in prison. MSU and the USA Gymnastics have been heavily criticized for enabling Nassar’s abuse.

Raisman has found passion in advocacy over the past few months between speaking at schools and publishing her New York Times bestseller “Fierce.” She now shares her experiences with being a survivor of abuse and speaks out against the organizations that allowed her attacker to continue working well after they had knowledge of his misconduct. Raisman said these past few months have been just as tough physically and mentally as training for the Olympics.

She also talked about partnering with Darkness to Light, a sexual abuse prevention education program. The campaign, called “Flip the Switch,” trains people to protect children from sexual abuse through a two-hour course. She hopes the program will create a knowledgeable environment and eventually create a world where no one has to say “me too.”

Raisman discussed various mental health and relaxation methods she used for both her training and advocacy. Her favorites include acupuncture, baths and naps.

“If you make time for yourself, you will be the best version of yourself,” she said.

When preparing to confront Nassar at his sentencing hearing, Raisman said she used these methods and others to work her way up to it. Raisman gave statements about the personal suffering she experienced due to Nassar’s abuse, as well as the larger systemic failure to punish Nassar over the decades he was in practice.

Raisman hopes there will be independent investigations into the United States Olympic Committee, Michigan State University and USA gymnastics moving forward. She called for an end for the protection of abusers no matter their title or abilities, referencing numerous universities’ past protections of athletes and coaches who break the law.

Above all, Raisman expressed her dream “to be remembered for changing the way people respect women.”