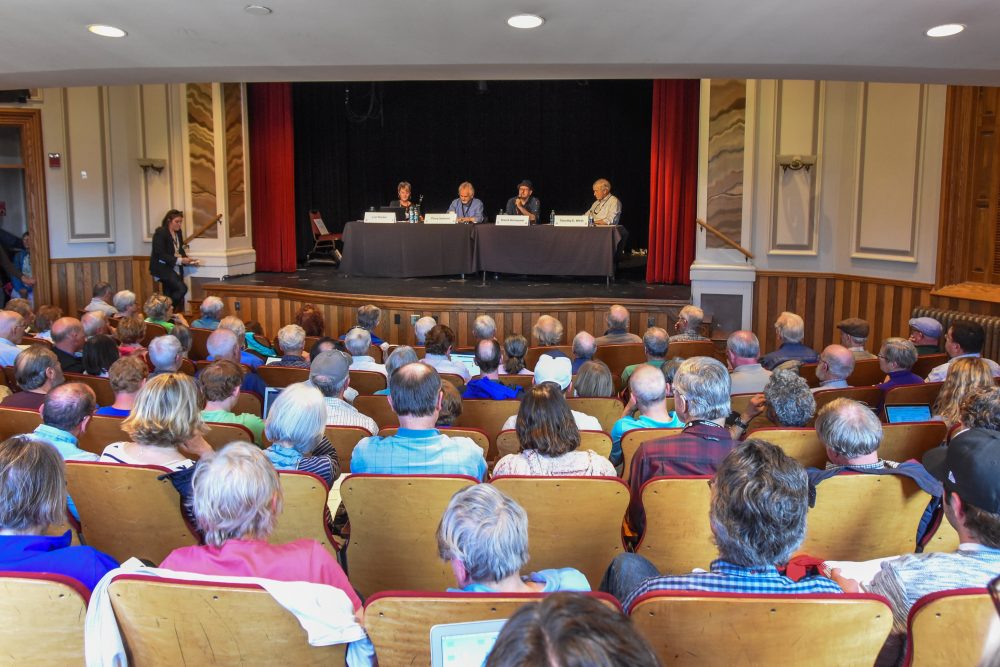 The “What to Expect When You’re Expecting Climate Change” panel attracted quite an audience. April 11, 2018. (Fiona Matson/CU Independent)

As the Conference on World Affairs heralds in its 70th year this week, it’s still adding a few firsts to its history.

CU has sponsored the Conference on World Affairs, an annual week-long event that brings experts in wide-ranging fields to speak on the university’s campus, since 1948. The conference draws around 70,000 people to campus each year and is often referred to as the “crown jewel” of campus.

The 2015 conference was Director John Griffin’s first since taking over from former Director Jim Palmer. It was also the year Clare filed a discrimination lawsuit alleging that Griffin had treated her unfairly based on her age and gender.

Before Griffin’s installment, the CWA workplace had a “supportive, fun atmosphere,” according to Clare. After Griffin’s arrival in 2015, Clare said, it shifted into an environment of “little trust.”

Clare said that Griffin avoided her from meetings that were directly related to her expertise. Her feelings of exclusion were echoed by other employees and volunteers within the conference, including former student volunteer Annika Erickson-Pearson.

“When Griffin took over, it felt like we had to prove our capacity to him,” Erickson-Pearson said.

The lawsuit was settled this January for $74,500. Despite the lawsuit, Griffin remains the director of the conference, overseeing the 200-plus panels that are held throughout the week. Griffin said that the lawsuit has had no bearing on this year’s conference.

The lawsuit coincided with a growing concern from some that the conference’s leadership, including Griffin, was taking a direction that veered from the core principles on which the conference was founded.

In April 2015, a letter written and signed by 39 members of the Committee for the Conference on World Affairs named concerns about the financial security and general leadership of the conference.

Erickson-Pearson, who volunteered with the conference from September 2013 to June 2015, signed the letter. She was also a member of the Interim Advisory Board, a group assembled to aid Griffin as he eased into the new position.

Having worked with both Palmer, the previous director, and Griffin, Erickson-Pearson said that Palmer trusted students a lot more. She was the board’s chair, a position above Griffin, yet she felt that “he did not take me seriously.”

The Interim Advisory Board, which consisted of six people, issued a formal report to the Chancellor about concerns they had with the new leadership. One of the themes of the report was a worry that Griffin was not adhering to the conference’s founding principles.

This year’s conference is the first that will incorporate a fee for an event: Aly Raisman’s talk Thursday night, held in collaboration with the Cultural Events Board. Some, including Erickson-Pearson, feel that CWA’s principles were jeopardized by taking a fee onto Raisman’s talk this year. Historically, the conference has been “free and open to the public” — one of its three founding principles.

“Little bit of a lesson learned, maybe, from the students involved,” said City Council Member Bob Yates, who has volunteered for the conference since 2012. “I’m not sure that we’ll do that again in the future.”

The conference retained 500 free tickets to give to the community through a lottery. Still, some students that did not participate in the lottery paid the $2 fee.

Raisman’s talk was co-sponsored by the Cultural Events Board and CWA. Since CEB charges for their events in general, they set the fee. The collaboration was student-led, according to Griffin.

Though nominal, the fee sparked some widely-publicized calls for CWA to maintain its “free for all” promise, including an op-ed in the Daily Camera from former director Jim Palmer. Griffin assured the public that this principle is not in jeopardy.

“We have over 200 events this year that are open to the public without charge. That remains our model, and we don’t have plans to deviate from it,” Griffin said in a statement to the CU Independent.

Griffin suggested that the conference this year received more community grants and donations than previous years, despite one community member pulling back on a $1 million donation in 2015.

“We have more overall donors than we had last year and maybe the most we’ve ever had,” Griffin said in his statement.

Kim Habicht is a senior at CU studying journalism and psychology. She is currently the head opinion editor at the CU Independent.