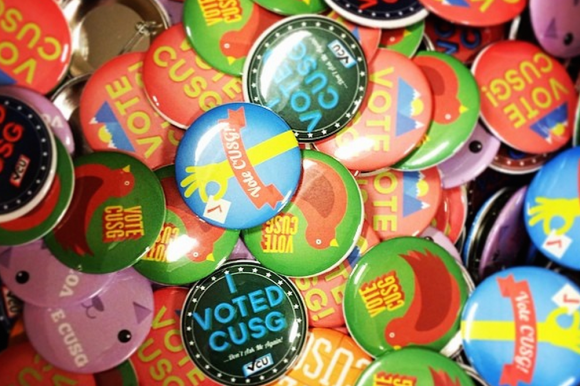 Screenshots of a text between an Empower tri-executive candidate and volunteers showed “unacceptable” campaign practices from the CUSG ticket, according to Election Commissioner Alexa Donner.

The texts, sent Sunday by Empower’s Tri-Executive Candidate Hadleigh Swarts, called for volunteers to station themselves near other tickets’ tables and “[grab] as many of their handouts as possible.” The texts also asked for people to convince voters to not vote for other tickets while standing near their tables. 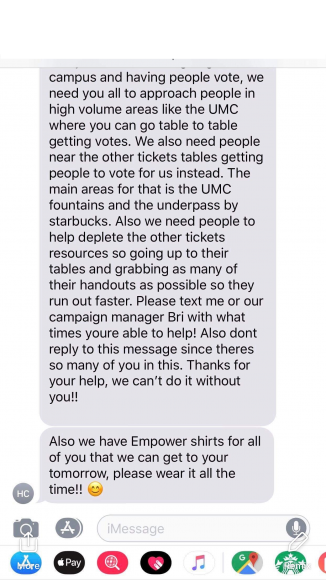 This screenshot has been altered to protect the identity of its recipient. (CU Independent)

Election Commissioner Alexa Donner was notified of the text Sunday night. She quickly warned the candidates to inform their volunteers to not follow through. As of this publication, the election commission has not received any more complaints about actions related to the texts.

“In the heat of the election, I made a grievous error in judgement, and I have regretted it ever since,” Swarts said in a statement to the CU Independent. “I take full responsibility for my actions and I would like nothing more than to take back what I said.”

There is no explicit section in the Election Code against behaviors advised in the text. However, if members of the ticket’s team go against the commissioner’s orders they could face at least two points of infractions. If a ticket accumulates ten points of alleged infractions, they are disqualified.

Minor election infractions on chalking and tabling are not uncommon. Major infractions have occurred in recent CUSG history, specifically the spring 2016 election. Two of the tri-executives-elect from the Revolution ticket, Colton Lyons and Marcus Fotenos, were disqualified with a collective 25 infraction points. The chancellor overturned the ruling, allowing Lyons and Fotenos to serve their terms as tri-executives along with Madalena DeAndrea the following year.