March For Our Lives brings Denverites, locals to Civic Center 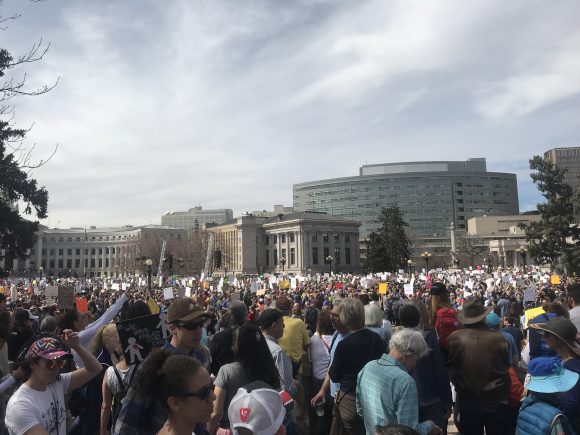 Over 100,000 protesters gathered in Civic Center Park on Saturday to participate in the nationwide March For Our Lives calling for gun policy changes, according to reports from lead organizer of the Colorado march, Tay Anderson. The march was one of over 800 sibling marches taking place around the U.S. and the world that brought hundreds of thousands to the streets in peaceful protest.

Planning for the original march, held in Washington D.C., started just four days after a school shooting in Parkland, Florida earlier this year. 17 students and staff were killed and dozens more were injured. The March for Our Lives website describes the march’s purpose as allowing people to “demand that their lives and safety become a priority.” Organizers in Colorado said their goals were to make the event about not allowing “one more child to be shot at school,” to show that “school safety is not a political issue” and that tangible changes should be made to regulations.

A variety of speakers took the stage before Denver’s march to speak on several mass shootings from the past two decades. Reverend Tammy Williams began the speeches with a moment of silence for victims of gun violence.

Following Williams came testimonials from those closely affected by mass shootings including Tom Mauser — the father of Daniel Mauser, who was killed in the Columbine High School shooting — and Coni Sanders – the daughter of Dave Sanders, who was also killed at Columbine — each spoke about the 1999 shooting. Tish Beauford, organizer of the Denver Women’s March, and Marc Weaver, a survivor, spoke about the 2012 Aurora Theater shooting.

Ally Olsen and Brooke Engel spoke on their experiences as survivors of the 2013 Arapahoe High School shooting. Diana Dang talked about her experience in the 2014 Isla Vista shooting. Sara Grossman spoke about her friend who was a victim of the 2016 Pulse nightclub shooting Orlando. The speakers wrapped up with 10-year-old Olivia Claudi from Lakewood and Maddie King, a 17-year-old student and survivor of the Marjory Stoneman Douglas High School shooting.

“I want to see a world where kids aren’t targeted and murdered by evil people wanting to be more famous than the last shooter,” Claudi said.

King followed Claudi, saying that she doesn’t have to be an expert to realize “guns are dangerous and that something needs to change.”

“My friends are dead,” King said. “People are dying and you aren’t doing anything.”

The crowd marched from Civic Center Park, down 15th, Welton and 17th to return to the park. People of all ages attended the march, ranging from toddlers in strollers to retirees. As the route crossed over the 16th Street Mall, people chanted and waved their signs at people visiting Denver for the afternoon.

The CU Independent talked to some marchers along the route and asked them why they were marching. 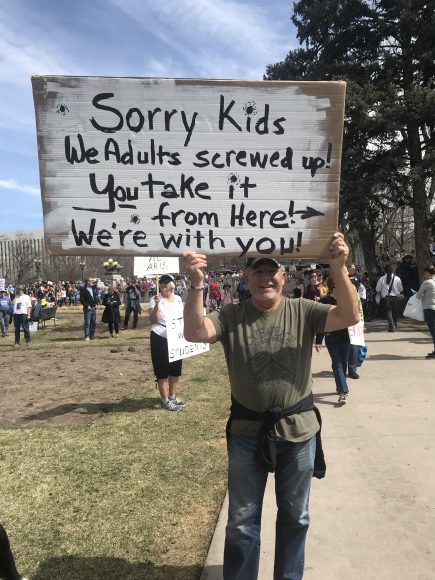 “I’m a minister and I did the funeral for Lauren Townsend from Columbine. We didn’t do enough. We prayed and we prayed, but we never got rid of the guns. I’m not against [the] NRA. I’m against [the] NRA thinking weapons of mass destruction are for the home. They’re not. They’re for war. Before the ministry, I designed weapons for the military, and that was one of the weapons I worked on. It was never talked about for the home, only for war. Get them out of the house.” 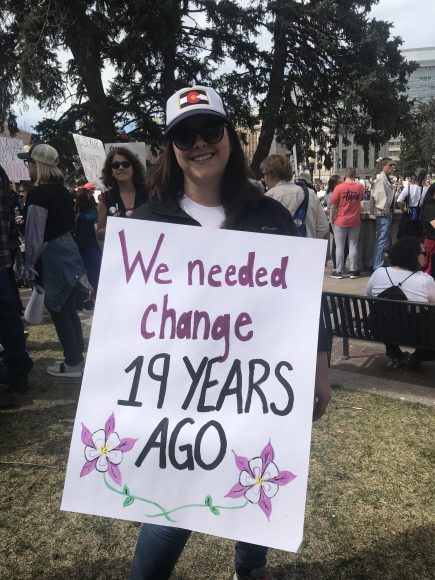 “I was eight years old when Columbine happened, and I still have nightmares about it. This is very important to me.” 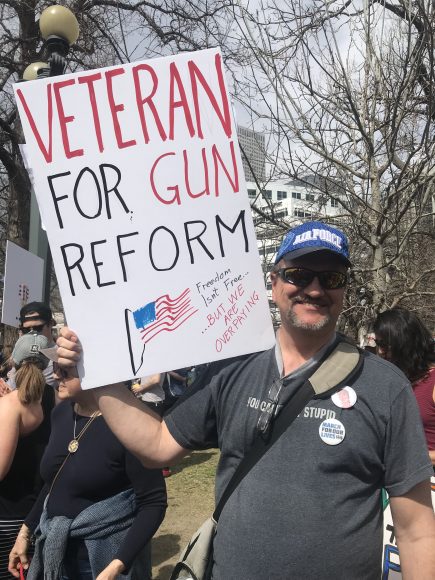 “I’m not sure what to say without using expletives … The NRA is not the USA.” 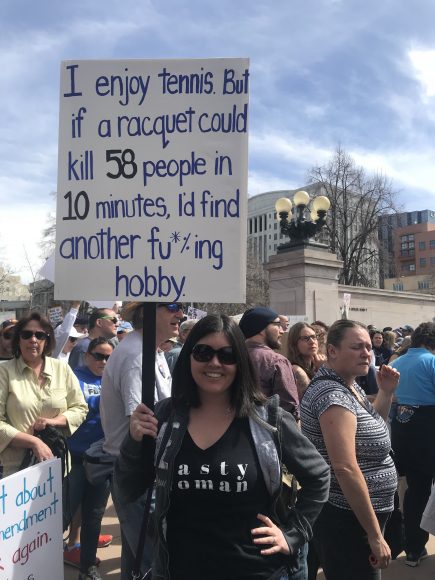 “People are choosing their own preferences over people’s lives.” 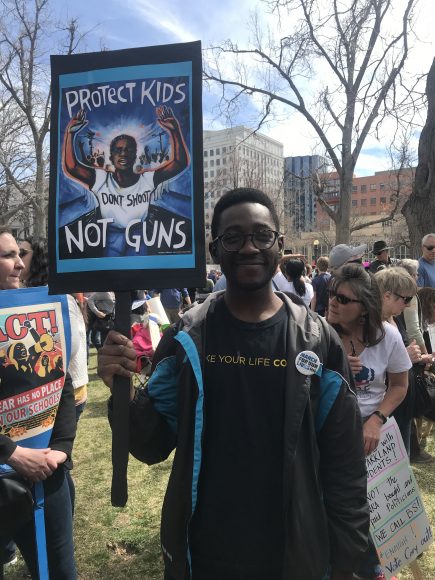 “If you look at where we are right now in our society, it’s important for young people to stand up for what’s right when it seems like there’s no hope in the future. Seeing [the march] is awesome.” 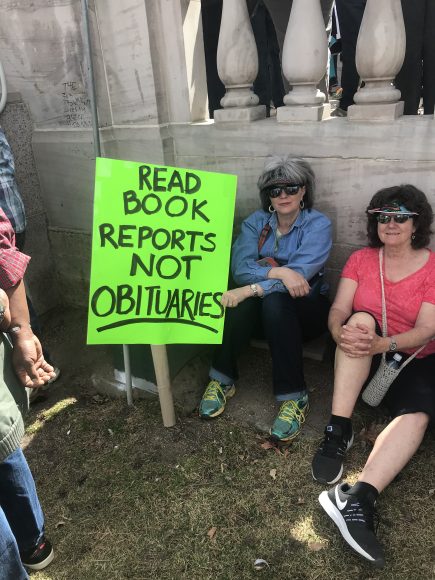 “I’m here because the NRA [has made] lapdogs out of Congress. We’re coming for those seats.” 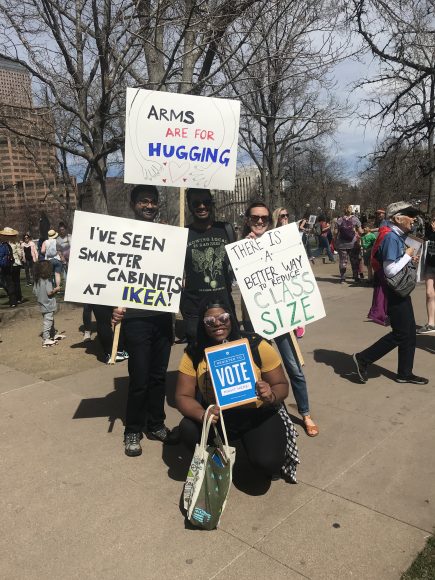 “All of us are tired of waking up to news every day and seeing innocent people being killed, whether it’s by police or in their classrooms. We’d like to see serious actions from politicians that makes our country safer.”