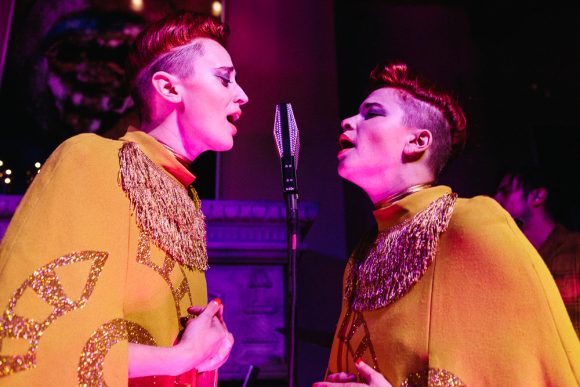 Fresh from touring with Pink Floyd’s Roger Waters for the better part of 2017, Lucius held their own in Lucius: An Intimate Acoustic Show at the Boulder Theater on March 10.

The duo took to the stage to share a single mic for an intimate acoustic performance of Nudes, a refreshingly original 2018 album in its decision to be slightly, well, unoriginal. It slows down the pop pace with a compilation of covers and acoustic version of songs off the band’s previous discography. Lucius also sprinkled in a few new collaborations with big names such as Nels Cline of Wilco on “Million Dollar Secret.”

The crowd settled into the falsetto dynamism of Lucius with their opening song “Woman.” Their refined vocals interwove with each other for the entirety of the ten-song setlist. Developing into the vocal climax of “I say I’m going to leave tonight, Don’t let me go without a fight” that shook the foundation of the theater.

Boulder’s finest craft beer holders and proud owners of ironically cut bangs leaned in after the opening set. The energy grew as the rest of the Brooklyn based ensemble joined the stage. Drummer/producer Dan Moland and lead guitarist Peter Lalish stepped into the night by adding accompaniment to “Right Down the Line.”

The loudest part of the night was in the fashion and twin aesthetic of the performers. Jess Wolfe and Holly Laessig’s commitment to costume on and off the stage earned the duo a comparison to David Bowie’s stage art in his Ziggy Stardust era, as noted by Pitchfork How Lucius Made the Band Uniform Cool Again.

What Lucius does so well, besides making a statement in matching razor cut platinum wigs and 60’s pedestal boots, is to utilize the mirror aesthetic to add to the inseparable harmony of the night. This creates a dual visual and audio blend of the senses.

Lucius has progressed far from the “girl band” labeled debut album Wildewoman and managed to bring the art form back to the “backup singer style” of owning the harmony and the bulk of the song. They make charged vocals and a patient performance the star of the show. However, the set list seemed to fold in on itself until “Something About You” revived the energy of the theater halfway through the set.

Lucius found the goldmines available in Tame Impala’s 2015 “Eventually” release off the Currents album. The original seemed to skip entirely the depth Wolfe and Laessig discovered in their performance, a nod to their ability to recreate and not just emulate.

An acoustic performance of “Tempest” off their 2014 Wildewoman album allowed more room for the band to riff when the duo turned their backs to the crowd. The back of Wolfe and Laessig’s floor-length jackets were custom designed with an embroidering of “Birth of Venus.” It was a dope feminist representation that was slightly more subtle than the booby ceramic Lucius mugs for sale by the bar.

As the night came to a close, two concertgoers donned the same wigs as Wolfe and Laessig, waving their newly purchased booby mugs in time to the slow conclusion of “Goodnight, Irene.”

The performance served the intention of the tour well, an intimate acoustic experience. Fans seemed satisfied after filing out of the doors of the Boulder Theater, some singing along to the set list while a few spoke about how they wished “Two of Us on the Run” had made the cut for the performance. Much of dynamic vocal interplay of Lucius can be enjoyed by listening to the album Nudes, but the blend of 60’s style live stage presence with a dose of new wave feminism would be missing from the mix.