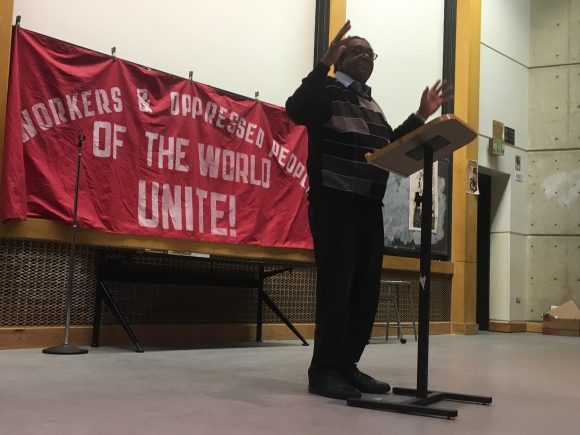 Bobby Seale discusses how his organizational skills helped in uniting the oppressed to form the Black Panther Party, whose goals are aimed towards equality for all. Feb. 28, 2018. (Hunter Allen/CU Independent).

Co-founder of the Black Panther Party Bobby Seale spoke to a packed auditorium about his experience as an activist and the continuing need for grassroots organizing at CU Wednesday night.

Bobby Seale and Huey Newton founded the Black Panther Party in 1966, following the assassination of Malcolm X. Although he was introduced as a co-founder, Seale explained that though many credit Huey Newton as the primary founder, “in fact, it’s just the other way around.”

The Black Panthers’ original purpose was to protect African-Americans from police brutality. Over time, the party became an anti-imperialist and anti-capitalist group which has since grown by embracing all community members who suffer under a capitalist system.

Seale explained the party was open to all progressives, regardless of race, gender or background. That, he said, “was one of the greatest characteristics of the Black Panther Party.”

“Back in the day, when we said ‘coalition politics,’ we weren’t playing,” Seale said.

Much of his talk focused around the importance of grassroots movements. He explained that organization is key in achieving any great feat. In order to encourage assembly, organizers needs to understand the desires and needs of their communities. Seale hosted barbeques after every protest. In 1972, he supplied thousands of bags of groceries to Oakland community members to encourage voter registration.

“I always fed my troops,” Seale said, emphasizing that “you have to pay attention to the fine details.”

With the Black Panther Party, Seale was “organizing a mass of people to resist, today we have to do this again,“ he said.

Some individuals are already working towards this kind of grassroots resistance, including local socialist activist, Charles Wofford, who came to hear Seale speak.

“I personally adhere to revolutionary socialist politics myself, so when I heard that Bobby Seale was coming in, well, I had to get a ticket,” Wofford said.

Others traveled greater distances to be in attendance, including Denverites Nick Chambers and Malcolm Barnes. Chambers said the commute was worth it “to see a historical figure and a great leader.”

As for Seale, he is traveling the country and sharing his story to gain support for a movie he’s developing. Seale wants to represent the history of the party with as much authenticity as possible. He clarified that the Black Panther Party isn’t just for African-Americans. One of the great lies the media told in the past was that the party hated white people.

“How can we hate white people if we’re out here protesting with our thousands of white left-radical buddies?” Seale asked.