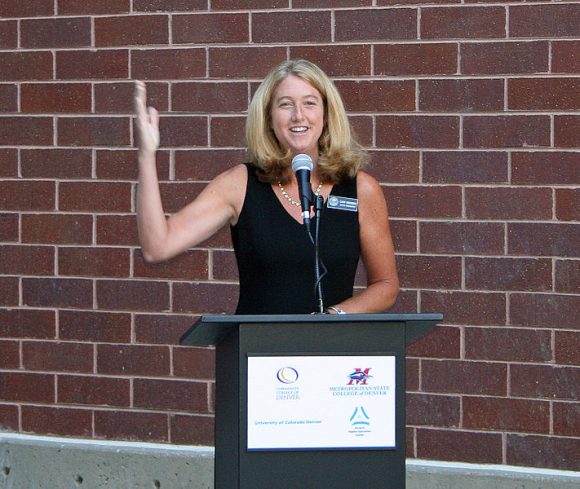 In recent weeks, Democrat governor candidate Cary Kennedy has gained more support in Colorado, closing the gap between her and front-runner congressman Jared Polis (D-CO). Due in part to the endorsement by two influential teaching associations, the Colorado Education Association (CEA) and the Colorado chapter of the American Federation of Teachers (AFT).

The CEA is a statewide education association advocating for public education employees. Kennedy’s pro-education stance grabbed the attention of CEA members who unanimously voted to endorse her, according to a CEA press release.

“Cary Kennedy is a champion for Colorado’s kids and educators and has been throughout her entire career,” CEA President Kerrie Dallman said during the endorsement press conference Jan. 31. “She has taken every opportunity to improve the lives of students, educators and their communities across the state.”

While Polis may have household name recognition as a five-term congressman, Kennedy’s education platform has fostered the support of thousands of educators across the state. The CEA alone represents more than 35,000 educators statewide. Committed to making education Colorado’s top priority, Kennedy’s aim is “to make every student by age nineteen college or career ready.”

Kennedy hopes to raise teaching salaries to the national average, expand access to concurrent enrollment – the ability for high school students to enroll in college courses – and vocational programs, and to start higher education scholarships for future teachers committing to work in hard-to-staff schools. While Democrat opponent Jared Polis is focused on preschool education, Kennedy won favor in the K-12 teaching community.

Although Kennedy has been quoted wanting to “make college more affordable,” she has yet to give any detailed plans. Kennedy’s campaign has also expressed her desire to focus on reforming the Taxpayer Bill of Rights (TABOR), a conservative initiative that caps state revenue increases to inflation. Her reformation of TABOR hopes to offer the state more money to spend on education. It is unclear, however, if the money would go to higher education. More likely, it will go into the K-12 public education system.

In an email correspondence with Kennedy’s campaign consultant Serena Woods, she disclosed that Kennedy also wants to push for a student loan bill of rights. Though this bill is not yet drafted, the primary goals would be to protect young people who are attempting to finance an education and better their lives. Kennedy has given no details as to how such a bill would protect student’s rights.

Republican candidates have disclosed more focused plans for higher education. After Tom Tancredo, the Republican front-runner, bowed out this past week, Victor Mitchell may pose a threat to Kennedy’s race if she clenches the primary. Mitchell is a Colorado entrepreneur looking to change higher-education funding. He hopes to lower “the cost of tuition, most especially on the degrees of STEM [Science, Technology, Engineering, and Mathematics programs].” To do this, Mitchell plans to put all state higher education funding to STEM programs, cutting funding to other programs like liberal arts.

Kennedy’s has a history on capitol hill as a Colorado state treasurer, deputy mayor and chief financial officer. She also authored and campaigned to pass Amendment 23, which requires the state to increase education funding each year. The state, however, has not fully implemented the amendment, instead cutting education funding.

“It doesn’t make any sense that our economy is one of the top-ranked economies in the country and our investment in our schools ranks at the bottom,” Kennedy said at the endorsement press conference.

When questioned about recent Title IX reform spearheaded by Education Secretary Betsy Devos, Woods stated that rolling back protections on college students competes directly with Kennedy’s platform on social justice. Kennedy disagrees with Devos’s desicion to rescind Obama era guidelines that expanded the scope of what constitutes gender-based discrimination to harassment, assault and rape, believing Devos’s changes could harm victims. Even calling for legislation that protects the Obama-era guidance.

The nation is looking closely at Colorado’s 2018 elections. With the economy booming, education has stepped up as one of the state’s top concerns for this election cycle. Its outcome is thought to offer glimpses into what the 2020 election will bring.