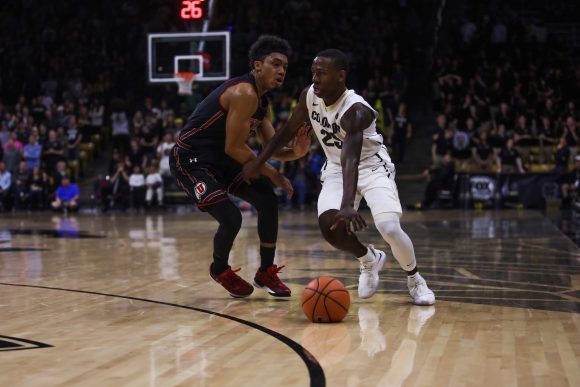 After some hard-fought yet fruitless performances in Arizona, the Colorado Buffaloes came back to Boulder Friday night and claimed a 67-55 victory over the Utah Utes. The win ends a seven-game losing streak against the Utes that dated back to February of 2014.

“I heard about it all week,” said Freshman Guard McKinley Wright IV. “We were on a seven-game losing streak. I wasn’t a part of that but I’m part of this team, so I feel like I lost seven times. I tried to come out tonight and help the seniors get their first win against Utah. I know how much it means to them though.”

Wright IV knew what was on the line Friday night and he delivered with a bounce-back performance of his own. After scoring only two points on 1-of-10 shooting against the Arizona State Sun Devils in Tempe last Saturday, he came back with 21 points on 8-of-12 shooting while claiming four assists in the process.

“It feels good,” Wright IV said. “I got in the gym as soon as we got back [from Arizona]. That same night I was getting shots up. I just stayed with it and stayed in the flow.”

Colorado got off to a nervy start with a modified lineup due to junior forward Namon Wright being ruled out with an illness. Freshman guard Lazar Nikolic came into the game to fill his role and proved vital in defending one of the elite guards in the Pac-12, Utah senior guard Justin Bibbins.

Bibbins coming into the game was averaging 14 points per game and 45 percent shooting from beyond the arc. The Buffs were able to maintain him to go for only seven points, 3-of-11 shooting and 0-for-5 from three for the night.

After the first five minutes, the Buffaloes tightened up defensively and held the Utes to an astounding 27 percent shooting from the field and allowed only 20 points in the first half, the lowest for a Buffs opponent in any half this season.

Colorado, on the other hand, shot 43 percent from the floor in the first half and led Utah at the break by the score of 27-20.

In the second half, along with Wright IV performing well, sophomore forward Lucas Siewert started to get hot. The Brazil native started to find a rhythm as he ended up with 10 points in the second half to end with 13 points with all three of his field goals coming from downtown.

“If there’s a small player guarding me, I’ll go inside. If there’s a big man, I feel that I have an advantage outside,” Siewert explained. “I consider myself relatively fast when it comes to big men. I just try to use that to my advantage. It can be a matchup problem for some teams.”

Colorado’s defense kept the Utes cold from the floor as the Utes had a span of three minutes roughly halfway through the second half in which they hadn’t scored a bucket.

The Buffs meanwhile kept their shots on point as they finished the game shooting 43 percent from the field and 45 percent from beyond the arc. Colorado ended up with a vital win at home to start a three-game run in Boulder.

The next two home games for Colorado will come against the California Golden Bears and the Stanford Cardinal. These two games for the Buffs could be a litmus test as to whether Colorado are a legitimate tournament team.

“It’s really important down the stretch that we are emotionally, mentally and physically ready to take on all the challenges that come in February and March, because this is when you’ve got to raise your game up.” Boyle said.

The Buffs will play the Bears next Wednesday at the Coors Event Center. Game time is scheduled for 9 p.m. MST and will be aired on ESPNU. 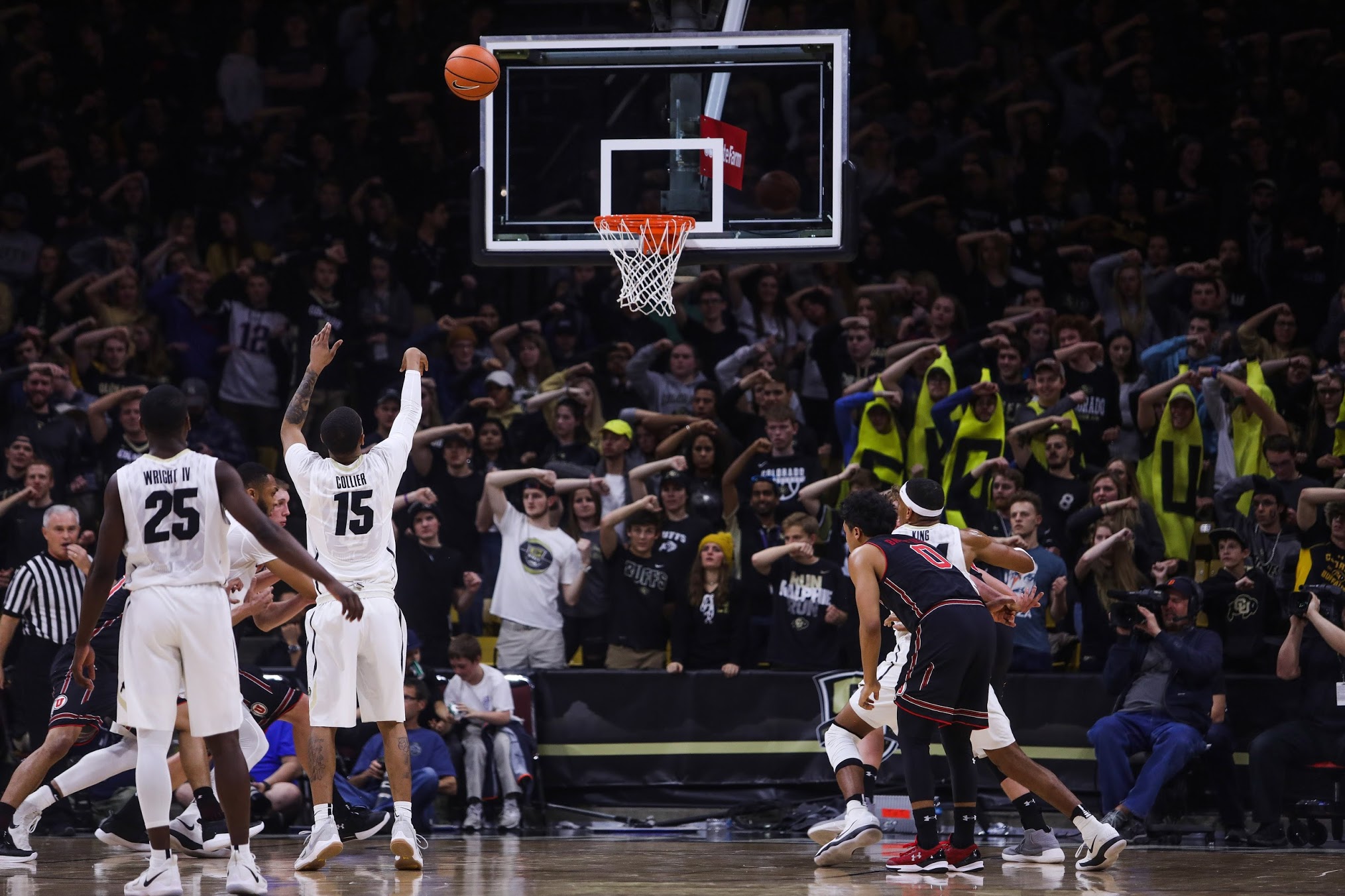 The student section raises their arms over their heads to make a "C" as Dominique Collier takes a penalty shot. Feb. 2, 2018 (Fiona Matson/CU Independent) 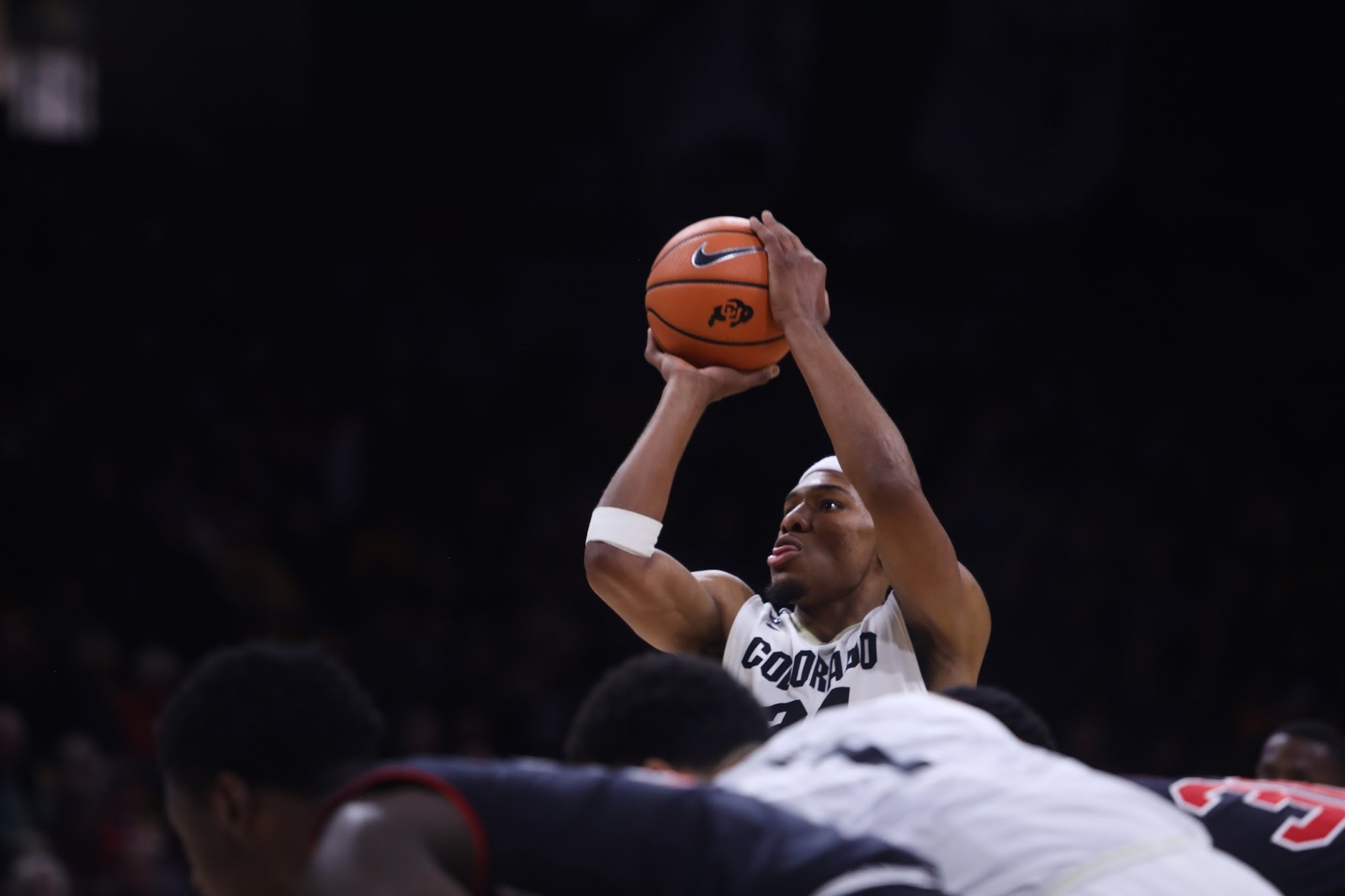 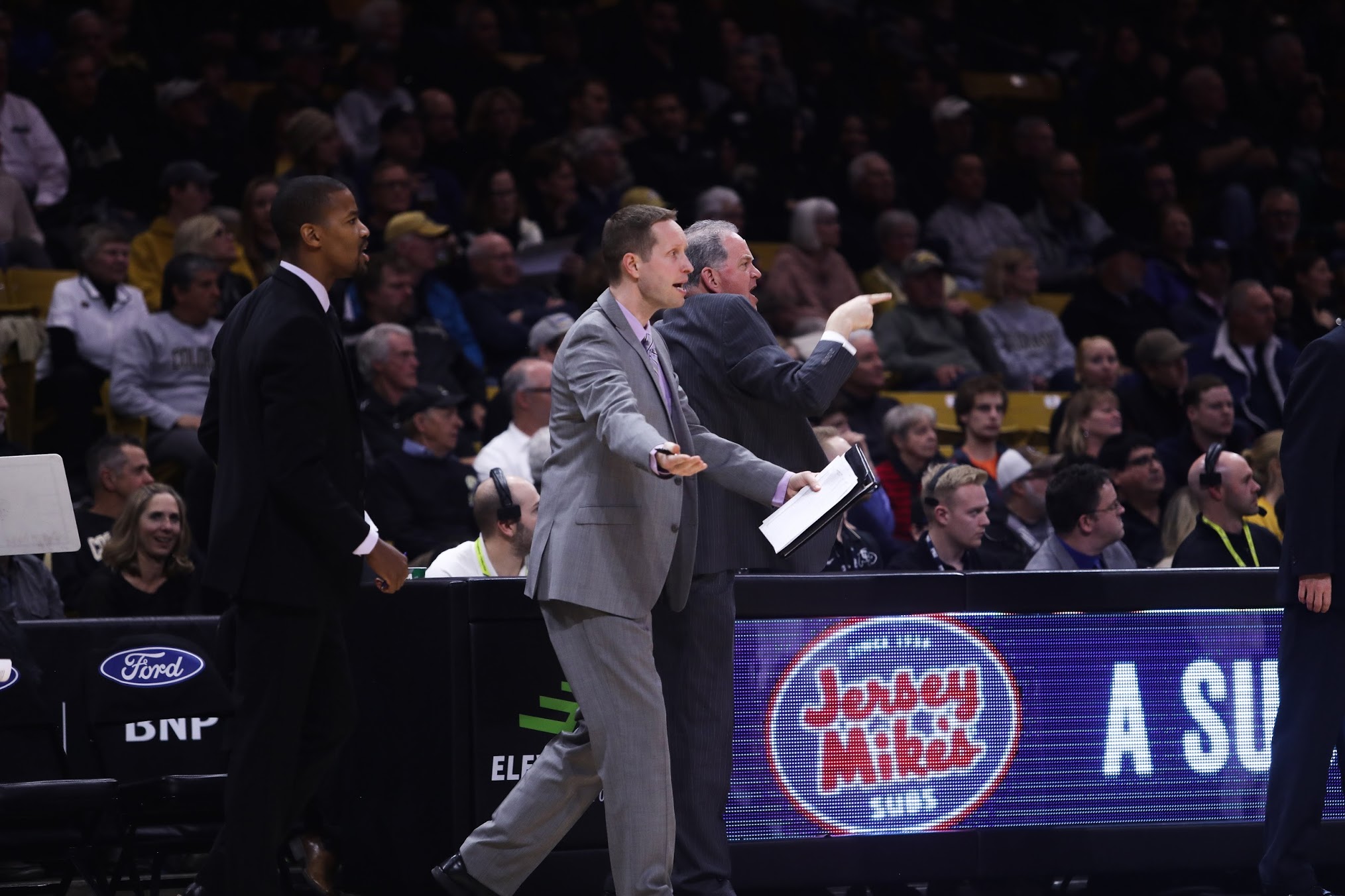 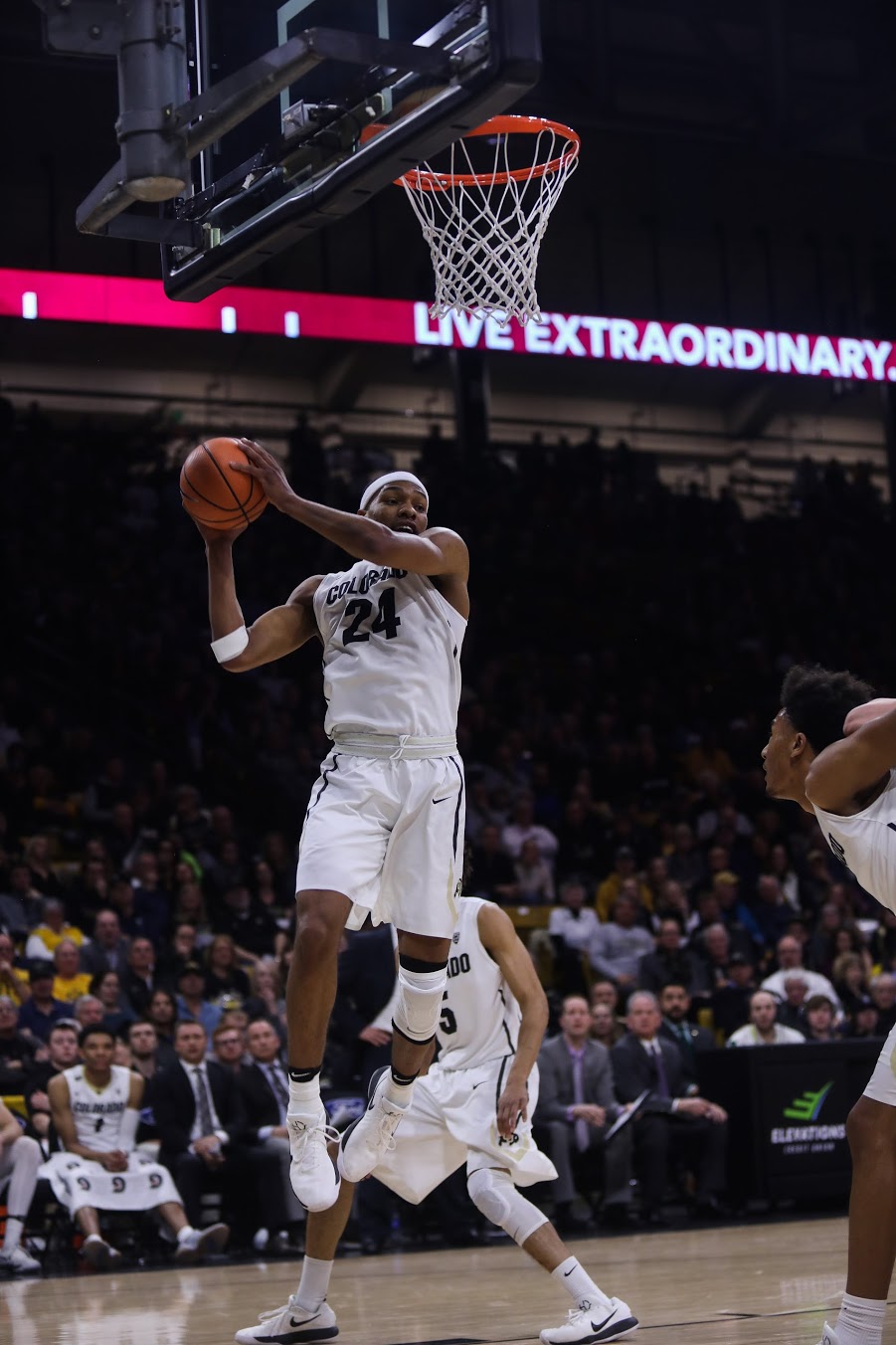 With a leap and a jump, George King aims for the basket. Feb. 2, 2018 (Fiona Matson/CU Independent) 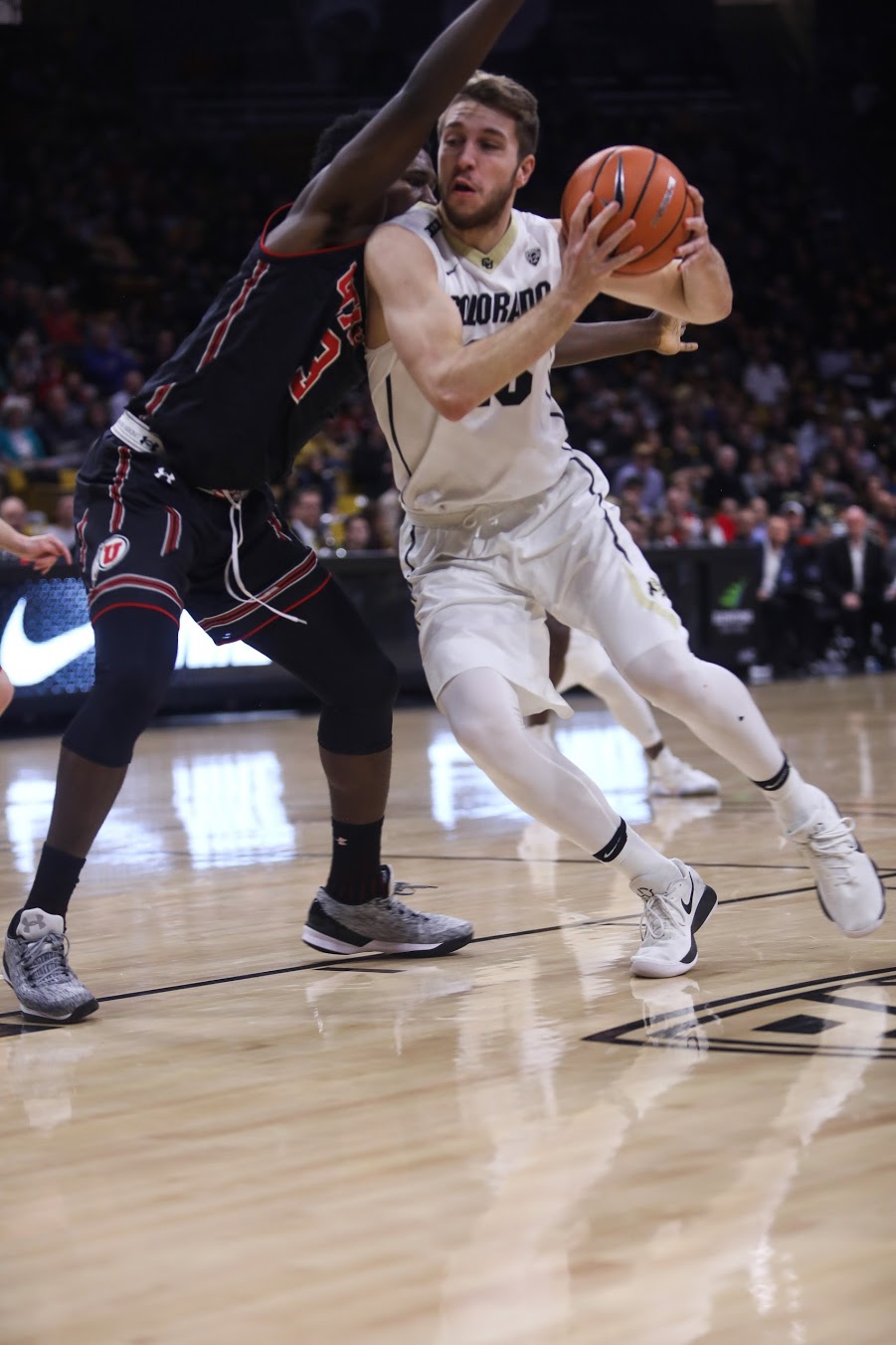 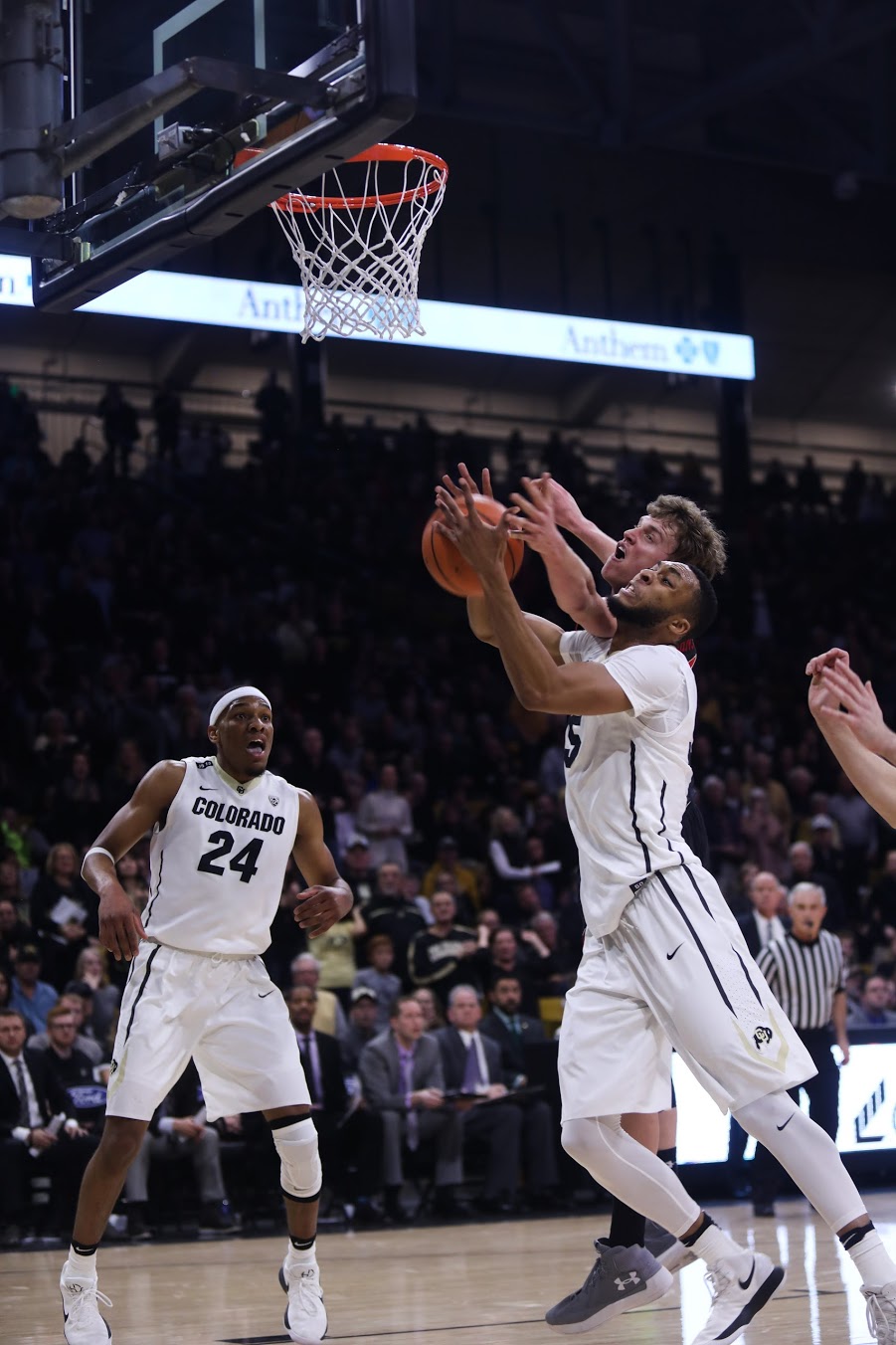 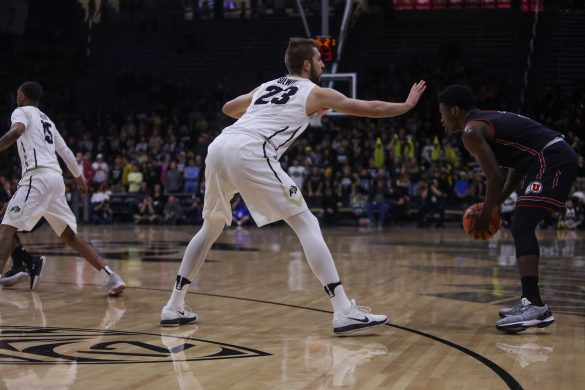 Lucas Siewert blocks a Utah player from passing the ball to anyone else. Feb. 2, 2018 (Fiona Matson/CU Independent) 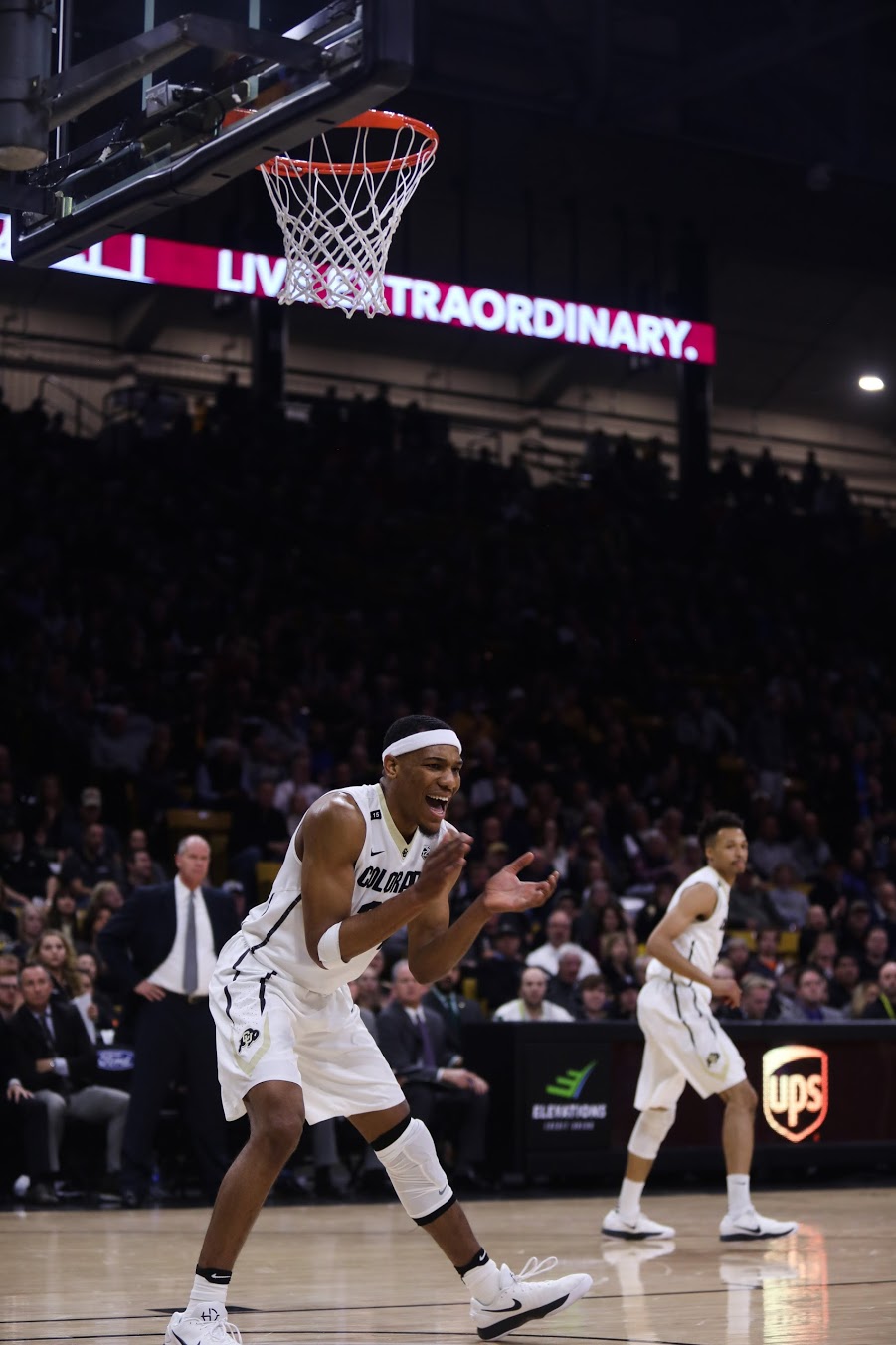 Though the sport is competitive, the players are still able to share a laugh on the court. Feb. 2, 2018 (Fiona Matson/CU Independent) 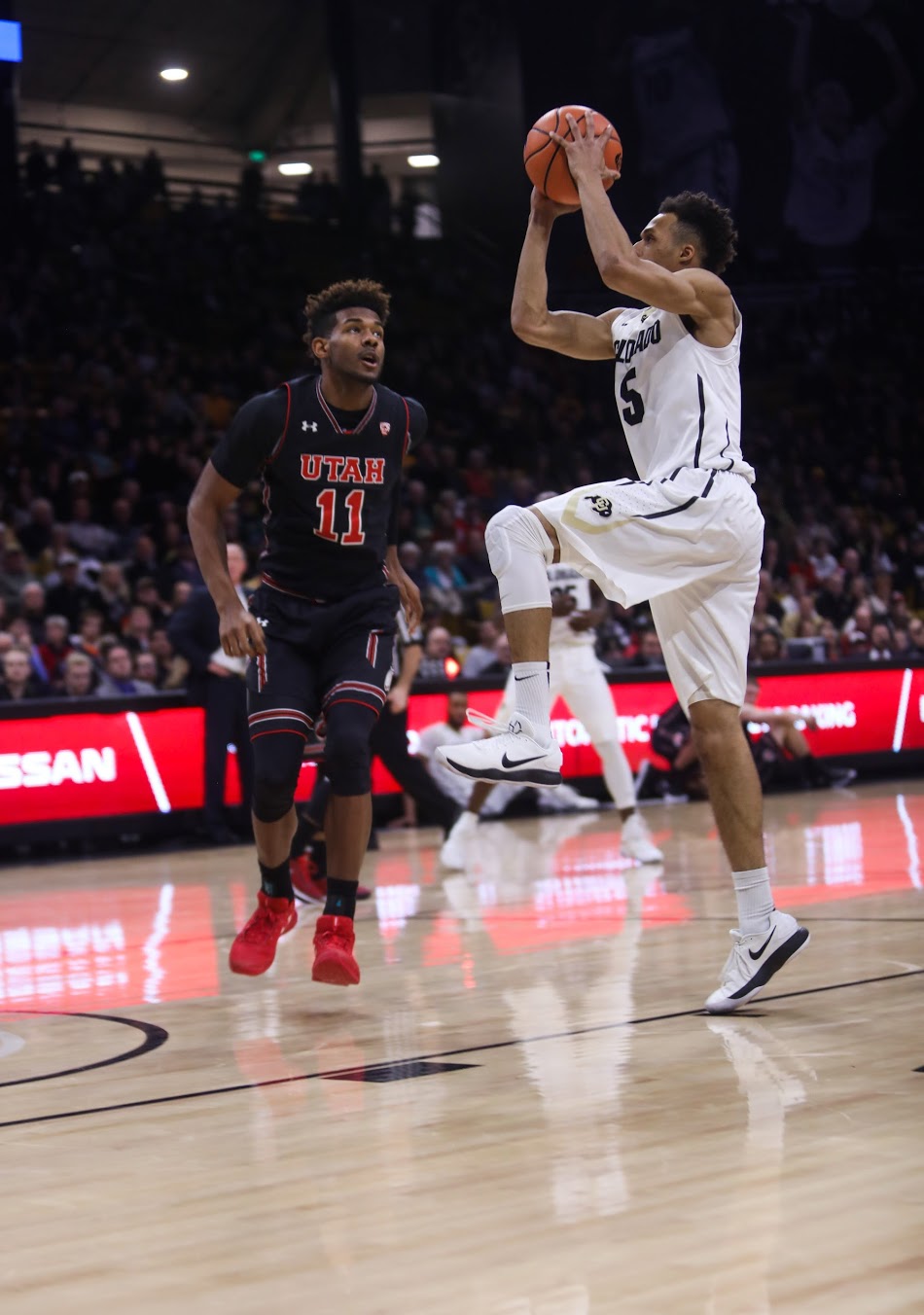