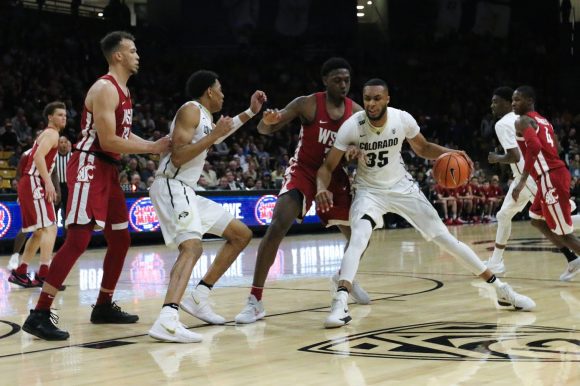 Fresh off a 82-73 victory over the Washington State Cougars earlier this week, the Colorado Buffaloes men’s basketball team played host to Washington on Saturday night.

Despite jumping to an early lead in the first half, the Buffs, (12-8, 4-4 Pac-12), in large part to ineffective rebounding, dug themselves a hole later in the initial half and eventually lost, 72-62.

On the night, Washington snagged an eyebrow-raising 50 rebounds, compared to CU’s 34. The Huskies managed 20 points off of second chance opportunities in the offensive zone, many of them coming from key rebounds near the rim.

“When you get out-rebounded by 16 in your own building, something’s wrong,” said head coach Tad Boyle after the loss. “We just got out-toughed, we got punked, we got manhandled — you name the adjective.”

Colorado was collectively cold from the floor for most of the night. The team made just over 35 percent of its shots from the floor, going 23-of-65 overall.

Three-point shooting was a particular area of disappointment for Boyle’s Buffs on Saturday. Senior guard Dom Collier sank a pair in the first half, while senior guard George King led the team with 10 shots from long range, but Colorado as a team made just 6-of-22 such attempts.

Things certainly weren’t so bad in the first 10 minutes of the game. Colorado lost the opening tipoff but bounced back nicely, thwarting numerous attempts by the Huskies to put in baskets near the rim.

The Buffs were boosted early on by two of their three freshman starters.

Tyler Bey and Dallas Walton scored the team’s first nine points. Bey was the brightest star for Colorado on Saturday, as he earned a double-double with his team-leading 14 points and 11 rebounds. Walton contributed 13 points in the loss.

Unfortunately for the Buffs, that lead was erased seemingly faster than it was established. Shortly thereafter, Washington went on a 12-0 run, taking a 23-18 lead with just over five minutes left before halftime.

The sequence dealt a blow to Colorado that it would never recover from.

“We just need to focus on remaining poised no matter how far up we go or how far down we go,” Walton said after the loss.

A layup by UW’s Jaylen Nowell put the Huskies up, 36-27, at the halfway point.

Although the Buffs and Huskies played a closer overall game in the remaining 20 minutes (UW outscored CU 36-35), within about three minutes into play, Washington had taken an 11-point lead.

The closest Colorado would come to the Huskies for the remainder of the game would be seven points, which the Buffs did do repeatedly.

Despite the attempted rallies, the effort fell short each time.

”We just [weren’t] hitting shots and we didn’t grab offensive rebounds after we missed our shots,” Bey said. “We didn’t really crash the boards.”

Bey led CU in offensive rebounds with seven. The rest of the team managed just three, all of which belonged to 6-foot-0 freshman guard McKinley Wright IV.

The latter’s 35 minutes on the court was a team-high. Wright IV scored 10 in the loss.

For the Buffaloes, the loss will likely be especially hard to swallow, as the chance to establish some critical momentum in preparation for next week’s road trip to a rematch with Arizona and ASU is now gone.

The No. 14 Wildcats and No. 16 Sun Devils, both of whom the Buffs upset earlier this month at home, will both certainly look to avenge their losses.