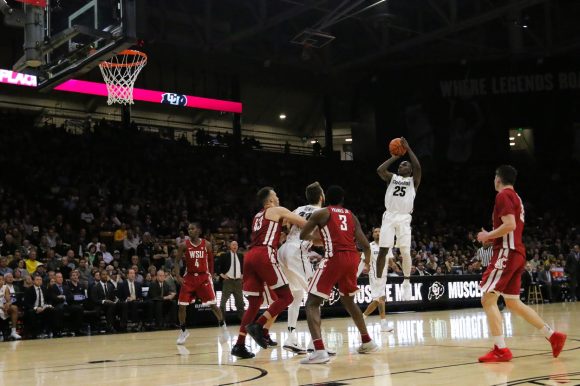 Mckinley Wright IV jumps over the heads of the opposing team to attempt a basket. Jan. 18, 2018. (Fiona Matson/CU Independent)

The Colorado Men’s basketball team outlasted the visiting Washington State Cougars Thursday night in a game that saw both teams firing often from behind the arc.

The Buffs attempted 44.8% of their shots from three-point range – an unusual sight considering head coach Tad Boyle’s offensive philosophy. For reference, CU averaged around 35% of their attempts from three prior to this game.

Not to be outdone, the Cougars attempted a majority (51.4%) of their shots from beyond the line, converting on 15 of their 34 tries.

While the Cougars haven’t done many things well this season, they have been sharp from behind the arc, with sophomore guard Malachi Flynn and junior forward Robert Franks leading the way. Just last week, Franks set a new school record for three-pointers made in a game as the Cougars cruised past Cal, 78-53.

“We shoot the the three ball and we shoot it well.” said WSU head coach Ernie Kent.

Coming into the game, there was some concern about how Colorado’s zone defense would handle Washington State’s strong three-point attack. Realizing the danger, Boyle switched to a man scheme late in the first half.

It seemed to work well, as the Buffs were heavily contesting every shot all the way into halftime. As the Buffs were smothering Wazzu on Defense, they were able to get hot from three, with senior forward George King nailing a couple open shots. The Buff’s barrage of long-range shots helped them cruise to a comfortable 42-27 lead at the half.

As the second half began however, the Cougars started finding some shots from deep. Some big threes from guard Carter Skaggs helped the Cougars put on a 18-2 run that brought them within five points of the Buffs.

At the same time the Cougars were finally heating up from three, the Buffs went stone cold, bricking multiple open shots and bringing their 50% three-point percentage down to around 36%. CU would only connect on three of its 12 three-point attempts in the second half.

“The three point shot is a great equalizer” Boyle said during the post game press conference. “We challenged ourselves to hold them to three threes and we failed that challenge.”

When asked about the Buffs shooting a high volume of threes, Boyle admitted he has no problem with his players making those shots, so long as come off a player making it into the paint.

“We wanted our threes to come after paint touches, we did that tonight.”

Though the Cougars eventually out shot the Buffs, Colorado managed to hold on to their lead and picked up their fourth win of Pac-12 play. While its unlikely CU will maintain such an aggressive style of play, they appear to be more comfortable from behind the arc as the season continues.

Up next for the Buffaloes is another home game Saturday night when the Washington Huskies come to town. That game will tipoff at 4 p.m. MST.