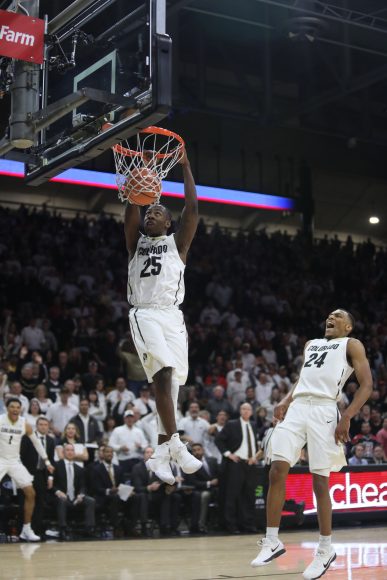 Coming off of an impressive upset win against No. 4 Arizona State on Thursday, the Buffaloes faced another tough task in dealing with Arizona as they played host to the Wildcats on Saturday afternoon.

The Wildcats, winners of nine straight, came into the game ranked No. 14 in the country.

The Coors Event Center quickly filled up with fans, as those repping the black and gold hoping for another upset were equally matched by loud Arizona fans sporting red and blue and chanting “U of A” to start the game.

Unlike the beginning of the ASU game, in which the Buffs quickly went down, 11-0, Colorado came out with the foot on the gas pedal.

“In games like this, we have to have high energy,” freshman guard Mckinley Wright said after the game. “We came out and tried to punch them in the mouth.”

Early on, the Buffs jumped out to a lead, as they went up 17-11, courtesy of a three-pointer by freshman center Dallas Walton. Walton’s shot forced a timeout from Arizona head coach Sean Miller. Later, Walton stroked a jumper from mid range.

Walton wasn’t done though. After a dunk off a nice feed inside from senior guard George King, Arizona called another timeout.

Walton proved he could hang both offensively and defensively with both of Arizona’s seven-footer players, Deandre Ayton and Dusan Ristic, who head coach Tad Boyle claimed were the best big men in the Pac-12 Conference.

Boyle was impressed with Walton’s play.

“There was an intensity in [Walton’s] eyes, before the game, at halftime, on the court,” Boyle said. “He was ready to play.”  He didn’t miss a shot all night, shooting a cool seven-for-seven from the field. 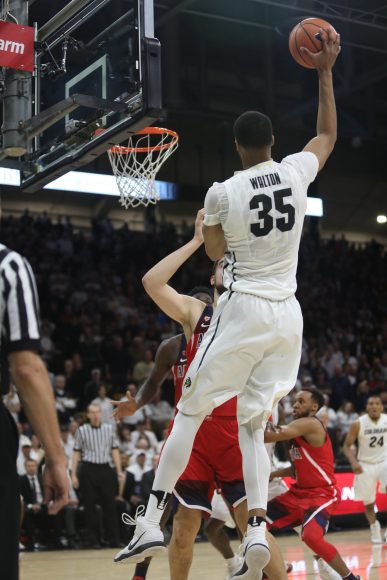 Just as the Buffs did with Arizona State, Colorado came out in a zone on defense.

“The key with talented teams is you want to keep them off balance,” Boyle said after the game.

The Buffaloes kept UA’s Allonzo Trier off balance, as the star guard averaging 20 points a game was held to just eight on Saturday and took only one shot that wasn’t a three-pointer.

“50 percent of his offense comes from ball screens and transitions,” Boyle said. “We were saying be aware of where he is in transition and get the ball out of his hand on ball screens.”

The Buffs took away a good amount Trier’s offensive output. It was Ayton who had to carry the load, and even he couldn’t match the team effort that the Buffs put forth.

CU had five players in double figures, led by freshman guard McKinley Wright IV, who scored 16. His 10 assists gave him a double-double.

The Buffaloes were sharp in the first half. They started off hot from beyond the arc, making four of the first five attempts from long range. Arizona, at that same point, was just three-for-twelve from three.

For much of the first half, the Buffs were above the 70 percent threshold in the shots made department.

“I think that’s our best half [of the year]” Wright IV said after the game. “we proved tonight we’re not just a second half team.”

At the half, the Buffs were up 45-29, and the Coors Event Center was alive.

The beginning of the second half did not go as well for CU. After turning the ball over just twice in the first half, the Buffs turned it over 13 times in the second, allowing Arizona to scratch and claw its way back into the game.

“When Arizona gets in transition with their athletes, they’re tough to stop,” Boyle said.

Arizona scored 12 points off turnovers, 10 of which came in the second half.

The Buffs’ sloppiness with the ball was worsened by shots that just weren’t going in the basket. Arizona started to climb back, and a monstrous and-1 dunk from Ayton got the Wildcats within striking distance. 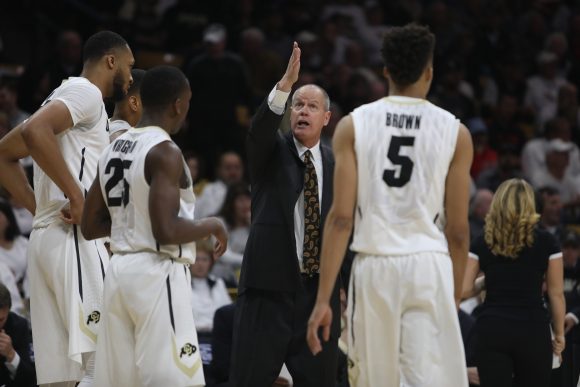 Tad Boyle gives his team a pep talk after the ball went out of play in Arzona’s 80-77 loss at coors event center on January 6th, 2018. (Phil McKenzie/CU Independent)

Down just six, the “U of A” chants started to come back.

Ayton had a much better second half than first half, recording a couple blocks as a couple Buffs foolishly tried to go straight at him in the paint. One block from Ayton transitioned into a circus layup from Trier, and what was once a twenty-point lead for CU was now just a narrow three-point cushion with just over 12 minutes to play.

A possession later, the Wildcats got out in transition again, but Parker Jackson-Cartwright was emphatically rejected by George King with a big block, keeping the score as it was.

The play hyped up the crowd and brought Colorado back into the game.

Walton checked back in shortly thereafter, and he proved to be the antidote for Ayton.

One seven footer scored over another, as Walton’s bucket put the Buffs up six. It seemed as if every time Walton made a shot to stay perfect, the crowd got louder.

A three-pointer from senior guard Dominique Collier gave the Buffs some breathing room, but another and-1 from Ayton brought the CU lead back to six with about seven minutes left in the game. 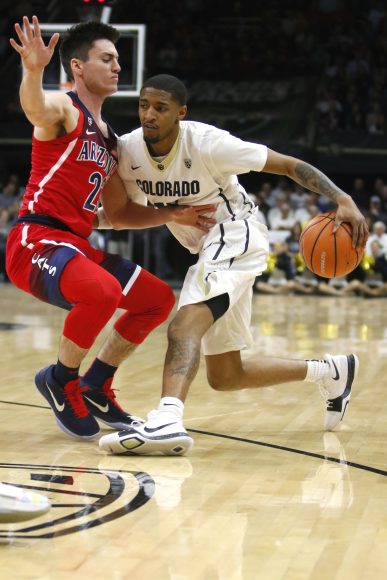 A crafty floater off the glass from Collier and an aggressive drive from Wright IV on back to back possessions brought the lead back up to double digits, as Colorado was up, 65-55.

Wright IV got his double double from his 10th assist, this time another pass to Collier who faded away with a man in his face and made another three.

Collier, who’s had an up and down career at CU, is finally starting to catch his stride.

“There’s not a player in the locker room that I’m happier for than Dominique Collier,” Boyle said. “My challenge to Dom has been to just go ball, go play, to not worry about anything.”

Collier did just that, finishing with 14 points, making two of his three three-point attempts along the way.

With 10 or more points in these last two big wins for the Buffs, it seems Collier has his swagger back.

After two much needed victories at home, the Buffaloes will hit the road for their next two games. On Wednesday, Jan. 10, CU will face Southern California, tipoff at 8 p.m MST.