Opinion: A plea to the College Football Playoff Committee 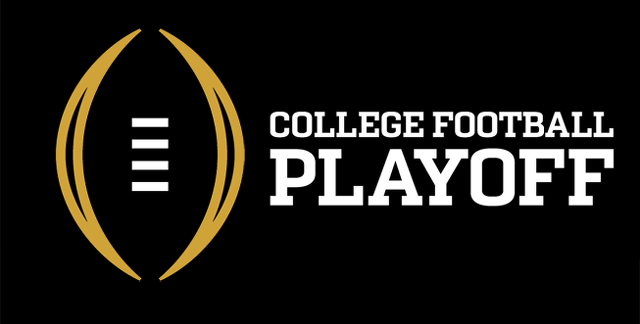 The logo of the College Football Playoff

On a crisp late November afternoon, a six-year-old boy rushes down the hallowed benches of California Memorial Stadium alongside his father. The California Golden Bears just humiliated the (then inferior) Stanford Cardinal in the Big Game.

Both he and his father are on the field, celebrating with the blue and gold faithful. In the middle of the field they spot the quarterback, Aaron Rodgers, who’s mobbed by a sea of fans while clinching a perfectly manicured rose in his mouth.

Pasadena was in their sights.

The Bears went 10-1 in that 2004 season, and they finished fourth in the AP poll. Their only loss was to the mighty USC Trojans, who went on to win the national title against the Oklahoma Sooners in the Orange Bowl.

Under the BCS system at the time, the Rose Bowl Game would be played between the Big Ten champion and the Pac-10 (now Pac-12) champion. Because USC was playing for the national crown in Miami, it surely meant that California were going to fill that Pac-10 slot in the Rose Bowl.

For context, the Bears hadn’t played in the Rose Bowl since 1959, which is still one of the longest Rose Bowl droughts among Pac-10 teams.

The smell of roses however turned into the scent of unjust miasma for both the father and son. The duo always aspired to go to Pasadena. Neither have ever gone.

The Texas Longhorns stole the spot from California that year, thanks to Texas head coach Mack Brown, lobbying the pollsters to elevate the Longhorns in the rankings above the Bears. Due to that incident, the AP decided to pull out of the BCS formula.

This led to the ensuing adjustments over the next 13 years, from the Bowl Championship Series system to the College Football Playoff, which launched in 2014.

You’ll understand that the purpose of the College Football Playoff is simple — select the four best teams in the country based on conference championships, strength of schedule, head-to-head record and other metrics.

However, the four-team system is still flawed. It’s become consistently inconsistent since its inception.

In the inaugural season of the College Football Playoff, Baylor and TCU, two teams that shared the Big 12 title, both had 11-1 records and suitable resumes. Both teams had three wins against teams ranked No. 16 or better in the College Football Playoff rankings.  Instead of choosing these teams, you simply took the other four power five conference champions and seeded them to their liking.

Why couldn’t either get a shot?

The next season, the playoffs included four power five conference champions again, leaving out two-loss Pac-12 champion Stanford, but also leaving out 11-1 Ohio State. They weren’t able to play in the Big Ten championship game thanks to a narrow loss at home to Michigan State, who won the conference title.

Oklahoma, the Big 12 champion, had a fairly similar resume to Ohio State. The Sooners lost to unranked rival Texas, while having quality wins against ranked opponents. Ohio State, on the other hand, had their only loss to a ranked Michigan State team while defeating only one ranked opponent all season — rival Michigan.

Why couldn’t the Buckeyes get a shot as well?

The 2016 season truly brought light to your inconsistent selections. This time, you only gave three of the four slots to conference champions.  Ohio State, who still had a stellar resume, was included after NOT qualifying for the Big Ten Championship Game. The Buckeyes went 11-1 once again and defeated the highly-ranked Sooners in Norman earlier that year.

Their only loss however was to eventual Big Ten champion Penn State, one of the hottest teams in the country at the time and who defeated the second-ranked Buckeyes on a blocked field goal return in crunch time. The Nittany Lions finished the season 11-2, but you found Ohio State to simply be the better team with the better resume.

Why didn’t a deserving conference champion get a shot?

This leads us to this season’s large debate as to who deserved the fourth spot in the playoff. This time around, Ohio State was in the shoes of Penn State from last season. An 11-2 record with a Big Ten title. But the Alabama Crimson Tide are now what Ohio State was last year — an 11-1 record and not qualifying for their conference championship game, thanks to an Iron Bowl loss to the Auburn Tigers.

Alabama’s resume this season compared to Ohio State’s from last season shows that the latter’s was stronger. While Alabama played No. 3 Florida State, it was played at Mercedes-Benz Stadium in Atlanta, which is considered a neutral site. Their quality wins weren’t that impressive either, with a win against No. 19 LSU followed by a close shave against No. 18 Mississippi State.

Last season, Ohio State traveled to Norman, Oklahoma, and defeated the 14th-ranked team in the nation. They also defeated three other teams in their conference that were ranked ninth or better in the College Football Playoff rankings.

But I’m guessing what led you to choose Alabama over Ohio State was the Buckeyes’ humiliating 31-point loss to Iowa in November.

Another conference champion left out.

First you include four deserving conference champions, then decided that they don’t all matter.

There were teams in seasons past and present that deserved to have a shot at the national title, aside from teams that initially made the playoff.

My solution is inspired by why our great nation galvanized to become independent.

Many American colonists during the 1750s showed grievances because the British Parliament passed laws that effected the colonists, such as the taxation of sugar and stamps. Most of the colonies believed that they weren’t directly represented in the Parliament, which violated the English Bill of Rights. This time in history is well known by the slogan “no taxation without representation.”

Every style of play needs to be shown. From the air-raid minded offenses in the Big 12 and the West Coast style offenses in the Pac-12, to the ground-and-pound mentality in the SEC.

The power five conference champions and three at-large committee selections are needed to form what would be an eight-team playoff.

But before I go deeper into the format of the eight-team playoff,  the FBS division should also create a subdivision for the group-of-five conferences (American, Conference USA, Mid-American, Mountain West, Sun Belt).

First off, the terms “power five” and “group of five” are terms that were conceived by the media. I would rename these two terms as “Class-A” and “Class-B” respectively.

So how do we definitely create the distinction between Class-A and Class-B? 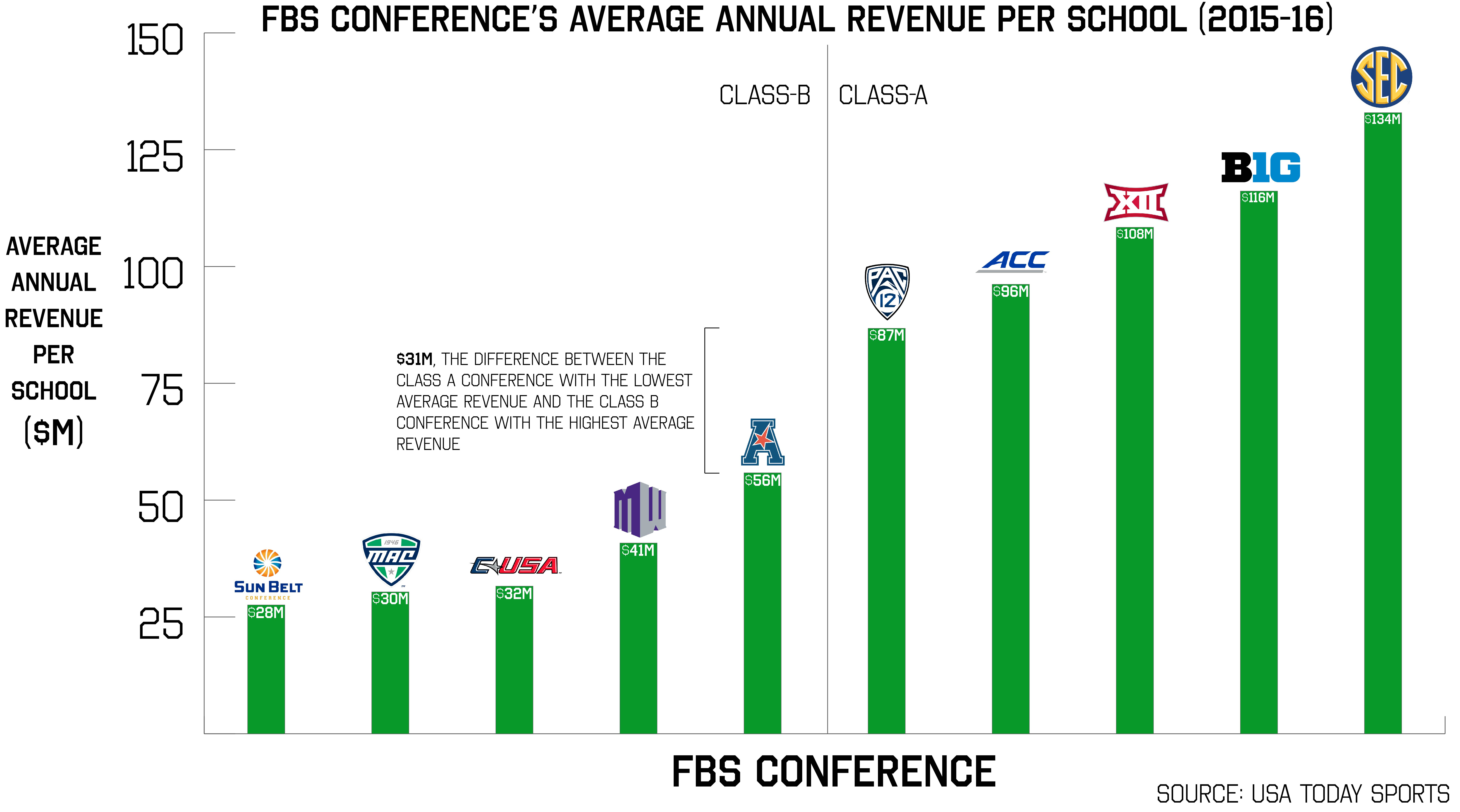 Above is a chart that depicts each FBS conference’s average annual revenue per school in that respective conference for 2015 and 2016.

But while Class-B would be a subdivision in the FBS division, they can still schedule Class-A opponents in their nonconference schedules.

Now, back to the eight-team playoff format.

It would include the five Class-A conference champions with three teams that are deemed to be the best teams that didn’t win a Class-A conference title. Independent schools such as Notre Dame and BYU would only qualify as at-large selections, and even Class-B schools can be selected as an at-large selection depending on if you deem that team to have the necessary factors it needs to qualify.

Here’s what the eight-team playoff format would look like for this bowl season: 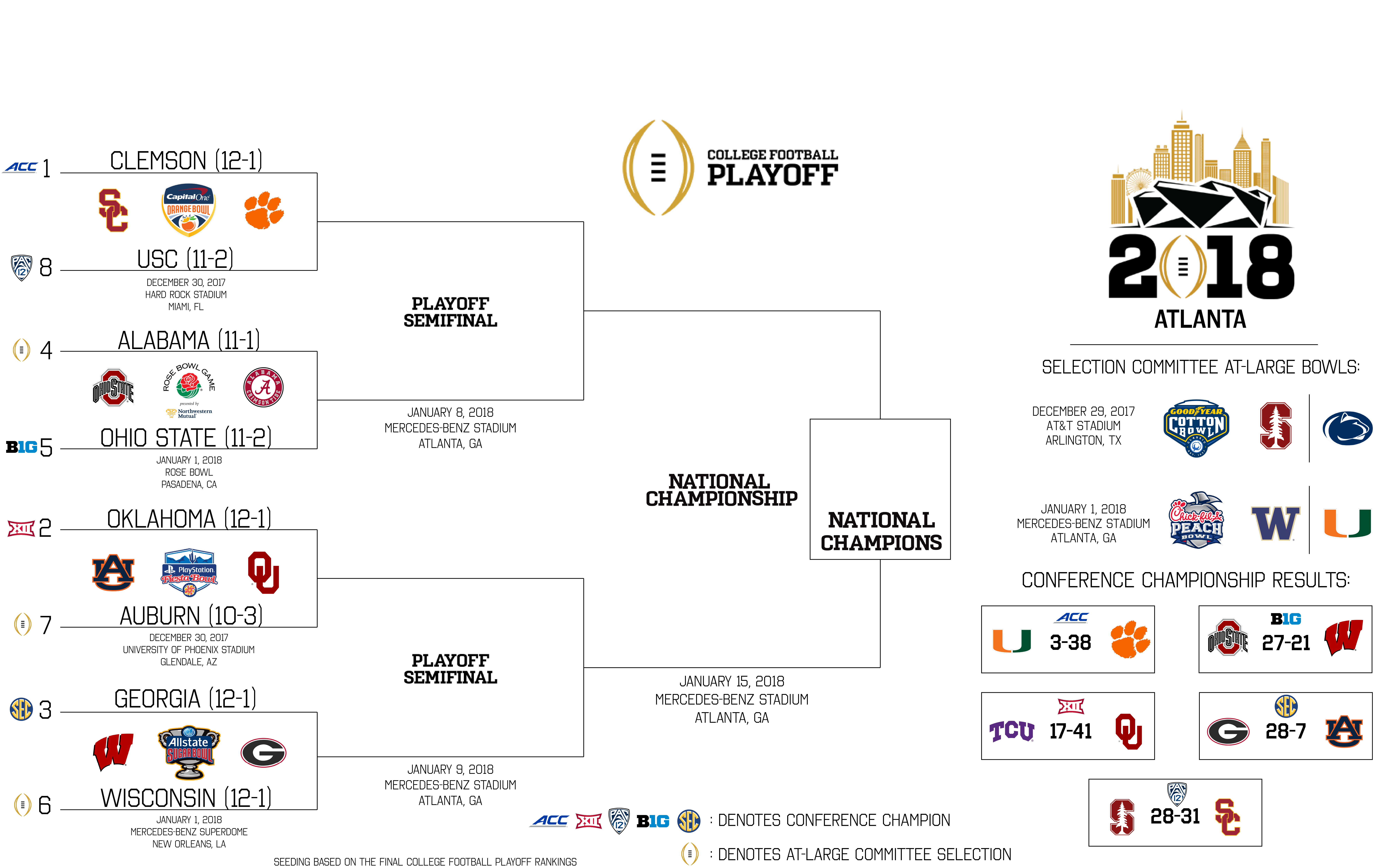 The first round of the playoff would be the four BCS bowls (Fiesta, Orange, Rose, Sugar) and you can determine who plays in which bowls.

You can also determine the seeding for each team. A Class-A conference champion doesn’t automatically attain a fifth seed or higher. As shown above, Pac-12 Champion USC is the eighth seed in this format because that’s the team’s final regular season ranking.

As seen in the right side of the above graphic, there would also be two selection committee at-large bowls (Cotton, Peach) that would be for the next four Class-A teams in the College Football Playoff rankings that didn’t make the playoff.

Now while adding another game to the college football season might sound unwise, do keep in mind that this year’s National Championship will take place on Jan. 8. In the eight-team scenario, the first round would take place from Dec. 30 to Jan. 1, the Semifinals would be on Jan. 8-9 and the National Championship would be on Jan. 15. The College Football season would only be extended by a week.

But I would be in favor of eliminating one nonconference game per FBS team if there was a need to reduce the amount of games. This would ignite a competition for athletic directors to bolster their school’s resume as well.

Remember the decisions you had to make in years past between teams that were on the fringe of the fourth spot? Well the decision would be easier with the third at-large committee selection being fought for by teams without conference titles, but good enough to make the playoffs. There’s less of a burden in that regard.

This year’s third at-large committee selection would be Auburn. Miami would be next in line for that slot, but a loss to unranked Pittsburgh and an embarrassing loss to Clemson in the ACC Championship Game would lead me to agree with Auburn’s positioning.

While these are probably the similar discussions that you’ve probably had in determining who would get the fourth spot, it would be more acceptable to debate this for teams that don’t have conference titles. It would take that specific criteria out of the equation, and the debate would come down to other criteria such as strength of schedule, head-to-head results, ESPN’s Football Power Index and strength of record.

Teams like Ohio State this season, and Penn State from last season, would save themselves from being part of these debates. Conference championships matter.

Even NFL teams with under .500 records have made the playoffs via winning their divisions and have beaten a wildcard team with a better record, a la the 2010 Seattle Seahawks.

But what would tie this all together would be the conception of an eight-team playoff among Class-B teams. It would have the same exact structure except that it would be named the College Football Challenger’s Cup. 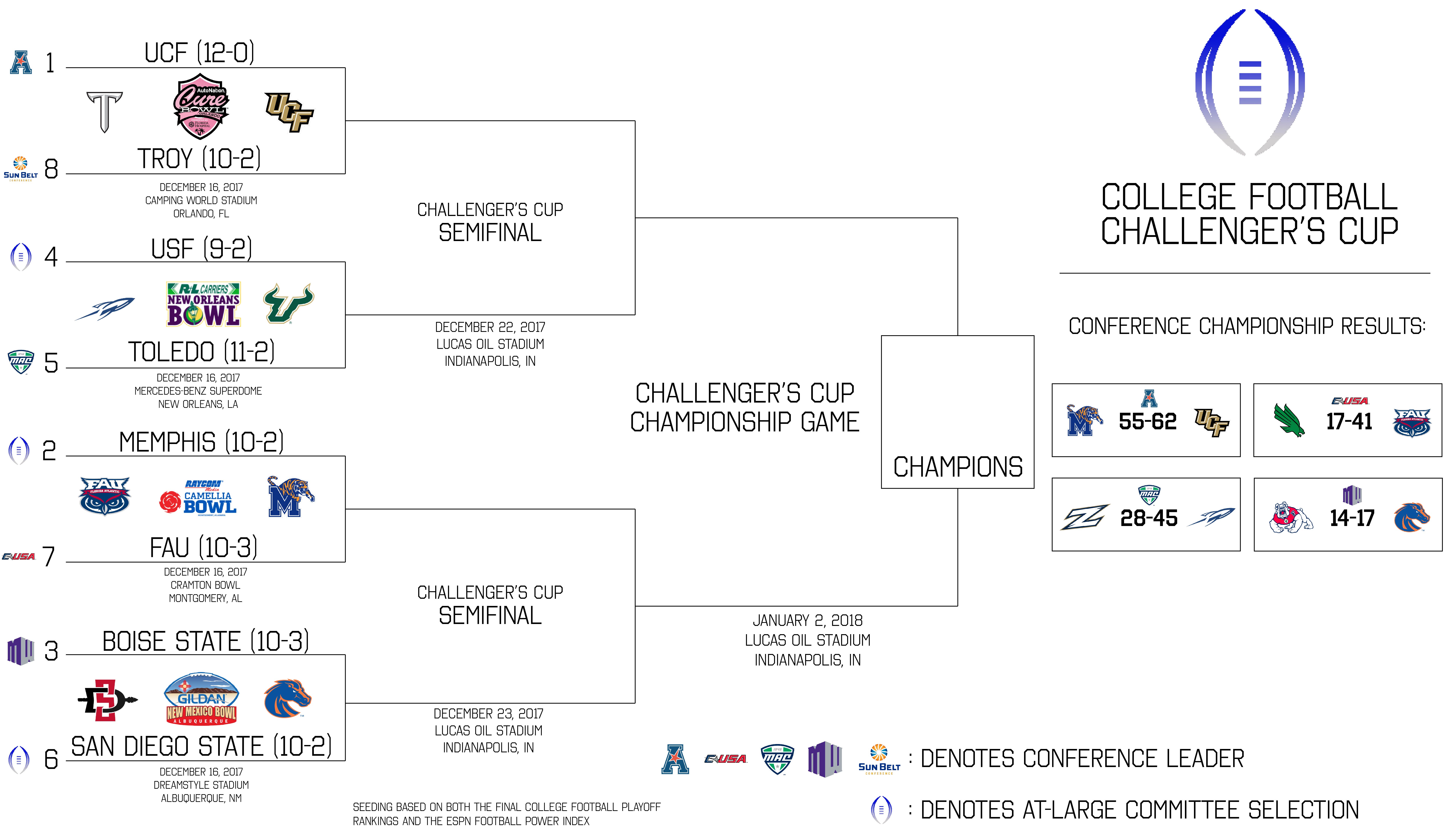 This would give a chance for the Class-B teams to compete for a title of their own instead of competing in just one bowl game. It would also bring an incentive for those who want to qualify for the eight-team College Football Playoff to schedule tough opponents in their nonconference schedule to have a chance. Keep in mind however, that independent schools wouldn’t be able to qualify for the Challenger’s Cup.

Maybe my dad and I would’ve been able to see our beloved Bears play for it all.