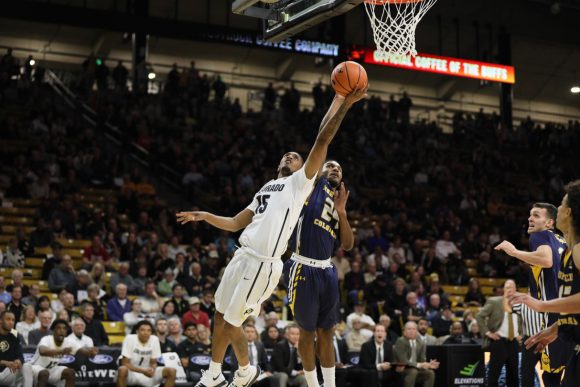 Senior guard Dominique Collier elevates the ball toward the basket during the second half of play at the Coors Events Center. Nov. 10, 2017 (Nigel Amstock/CU Independent)

The Colorado Buffaloes men’s basketball team added another win to their nonconference resume Wednesday night. The Buffs out-muscled the visiting New Mexico Lobos, earning a 75-57 victory and moving to 7-1 on the year.

Strong rebounding, stingy defense and sharp three-point shooting were all big keys for the Buffaloes in this game as they broke away in the second half for the victory. Senior guard Dominique Collier led the Buffs in points with 16, while freshman guard McKinley Wright had 12 and a team-high four assists.

The Buffs opened up the contest with an impressive 8-0 run that saw the Lobos fail to score their first point until four and a half minutes into the game. Even some early turnovers couldn’t slow down the Buffs, as Colorado stifled the Lobos on the defensive end.

New Mexico attempted to remedy the situation by switching to an aggressive full-court press. Unfortunately for the Lobos, this left some lanes open for Colorado’s offense, allowing the guards to attack the rim. It also allowed the Buffs to get some open looks from three, which they took advantage of, sinking four of eight attempts in the first half.

CU would continue to shoot well, making 60 percent of attempts from behind the arc.

Turnovers, on the other hand, continued to plague CU throughout the game. The Lobos were able to score a massive 28 points off the Buffs’ 23 turnovers.

The Lobos managed to fight back, capitalizing off some sloppy play by the Buffs to go on an 11-2 run and tie the game at 31. At halftime, Colorado went to the locker room holding a narrow 35-33 lead.

Still locked in a close battle, the Buffs found some momentum off an impressive sequence from guard/forward George King. The senior managed to execute a LeBron James-esque chasedown block before driving on New Mexico’s defense for an acrobatic layup.

King’s play ignited some rhythm for the Colorado offense, culminating in a thunderous alley-oop from freshman guard Lazar Nikolic off a pass from sophomore guard Deleon Brown.

Colorado’s rebounding, which has been a concern at times this year, was solid as the Buffs collected an astounding 58 boards to New Mexico’s 30.

Head coach Tad Boyle was pleased with his team’s performance after the win, but refrained from putting too much value on Colorado’s rebounding.

“We know it’s not going to be like that every game,” Boyle said during the post-game press conference. “New Mexico is not what you would call a great rebounding team, so I don’t want to put too much on that.”

Boyle did, however, have praise for the team’s defensive performance.

“The key to this game was transition defense and guarding the three-point line. We did that well, especially in the second half.”

Up next, the Buffaloes will travel to Cincinnati to take on the No. 13 team in the country, the Xavier Musketeers. That game will tip off on Saturday at 3 p.m. MST.