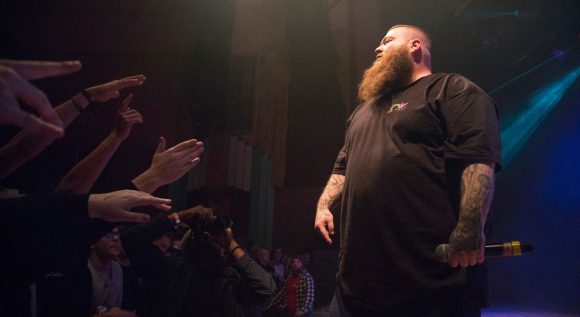 The Wednesday before Thanksgiving break, Action Bronson made some noise at Boulder Theater as part of his Blue Chips 7000 tour. His highly anticipated show did not disappoint as he put every ounce of energy he had into his engaging performance.

Before becoming a nationally appreciated rapper, Bronson was a fire-flame gourmet chef in New York City. When he was broke his leg and couldn’t work for months, he shifted his focus completely to rap and never looked back. Since then, Bronson has achieved what most aspiring rappers never see. After releasing three mixtapes and two studio albums, Bronson was voted into XXL’s loaded 2013 Freshman class that included the likes of Schoolboy Q, Logic, Ab-Soul, Travis Scott, and fellow New Yorker Joey Bada$$.

Two years later, he released his major label debut studio album, Mr. Wonderful, which peaked at No.7 on the Billboard charts. The album included his most successful single so far, “Baby Blue” featuring Chance the Rapper. A year later, Bronson and Viceland premiered two documentary series, “Traveling the Stars: Action Bronson and Friends Watch ‘Ancient Aliens’” and “Fuck That’s Delicious” along with a cookbook of the same name.

Around 10:30 p.m., the intro to the opening track off his most recent studio album, Blue Chips 7000, started playing and the crowd went nuts. Bronson came onstage shortly after in a black t-shirt, gym shorts and Hypebeast New Balance kicks, instructing the crowd to “put your motherfucking middle finger up.” Almost immediately, the entire crowd looked like a Donald Trump protest rally. When he started rapping, the first thing I noticed was the amount of passion in his performance. His arm movements were sharp and his flow was powerful and authentic.

While starting at the middle of the stage, he soon made himself comfortable in front of the stage monitors, getting up close to people taking videos. One fan was even lucky enough to have Bronson sign his copy of “Fuck That’s Delicious” while he was performing. At the end of the song, Bronson made his way back to the fan and said, “I’m sorry, let me try signing that again. I didn’t do it well enough” and was handed the book as the crowd erupted in cheering. More cookbooks made their way to Bronson’s hands and one person was lucky enough to even get their phone signed by the Queens native.

Bronson continuously gave that same energy with each of his songs, not even close to losing steam until the very end, as he shuffled through hits off Blue Chips 7000. Between his delivery and stage presence, every moment was worthy of social media affection. During “Hot Pepper,” frequent collaborator and opener Meyhem Lauren came out to spit his verse, with equally impressive delivery.

Perhaps my favorite song of the night was a throwback from his album, Mr. Wonderful. The amount of raw emotion that went into “Actin Crazy” from the start of the track was beyond unreal. As he slapped audience members hands and head banged, I couldn’t tell who was having more fun, Bronson or the audience. His performance was so impactful that “Actin Crazy” became my new favorite song in his discography. After the song, a fan yelled “Yo Bronsolino,” a common nickname for the rapper, “throw me a Fiji!” Bronson walked over to the stack of Fiji waters standing on the DJ booth and threw the fan a bottle. When he failed to catch it, Bronson said “It was in your hands man, you gotta catch it.”

Towards the end of his set, he started singing the chorus of his most popular track, “Baby Blue,”  a capella and the crowd immediately joined in. As the beat started, cheers erupted as he continued to deliver with the same energy as every other song. When Chance the Rapper’s part came up, suddenly the backing track for Biz Markie’s “Just a Friend” started playing in what was perhaps the most clever mashup for the song. As the crowd sang the chorus, Bronson started dancing and eventually went back into “Baby Blue.”

After taking a brief break to catch his breath — the altitude took a toll on his endurance — Bronson finished his set with his anthem, “Easy Rider.” Even as exhausted as he was, he still put 110 percent into his performance His voice drove the song with every ounce of energy he had left. Once he finished, he threw the microphone up and air guitar-ed the ending solo.

Bronson’s performance was nothing short of powerful. His bars were solid and his voice created a whole new appreciation for his music one can’t enjoy from solely listening to his recordings. Bronson is an essential show for hip-hop fans and especially for anyone who’s ever listened to his music. 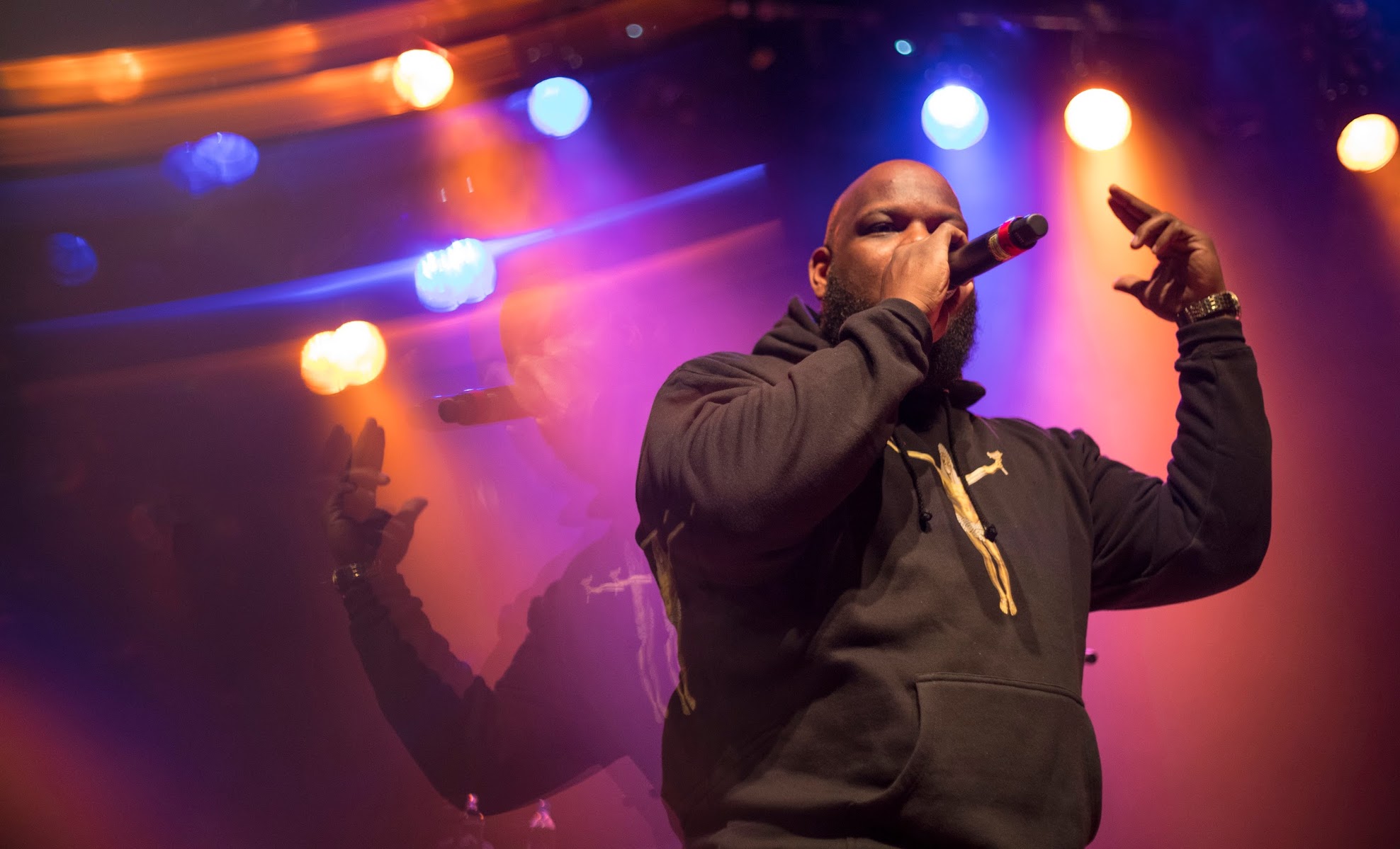 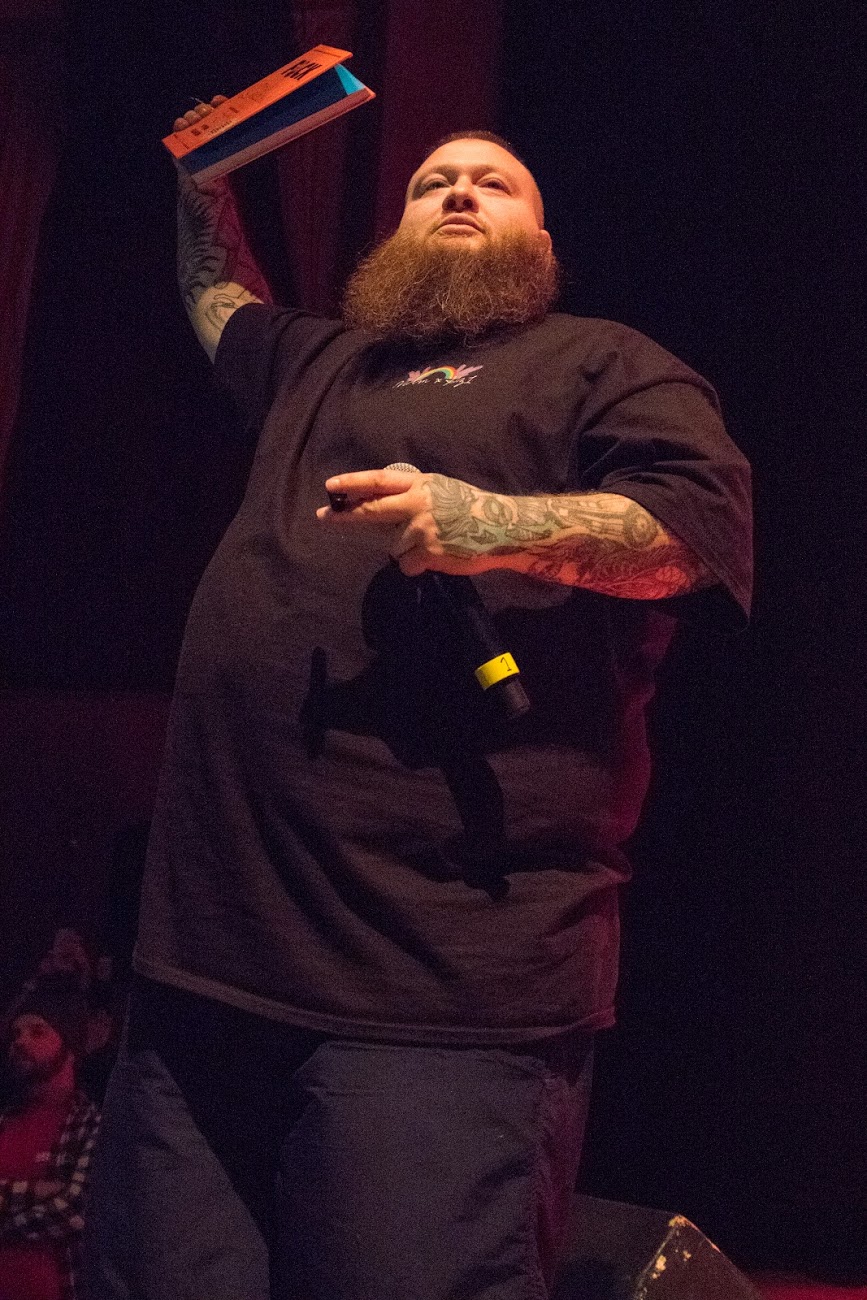 Action Bronson holds up a book during his performance. Nov. 15, 2017 (Phil McKenzie/CU Independent) 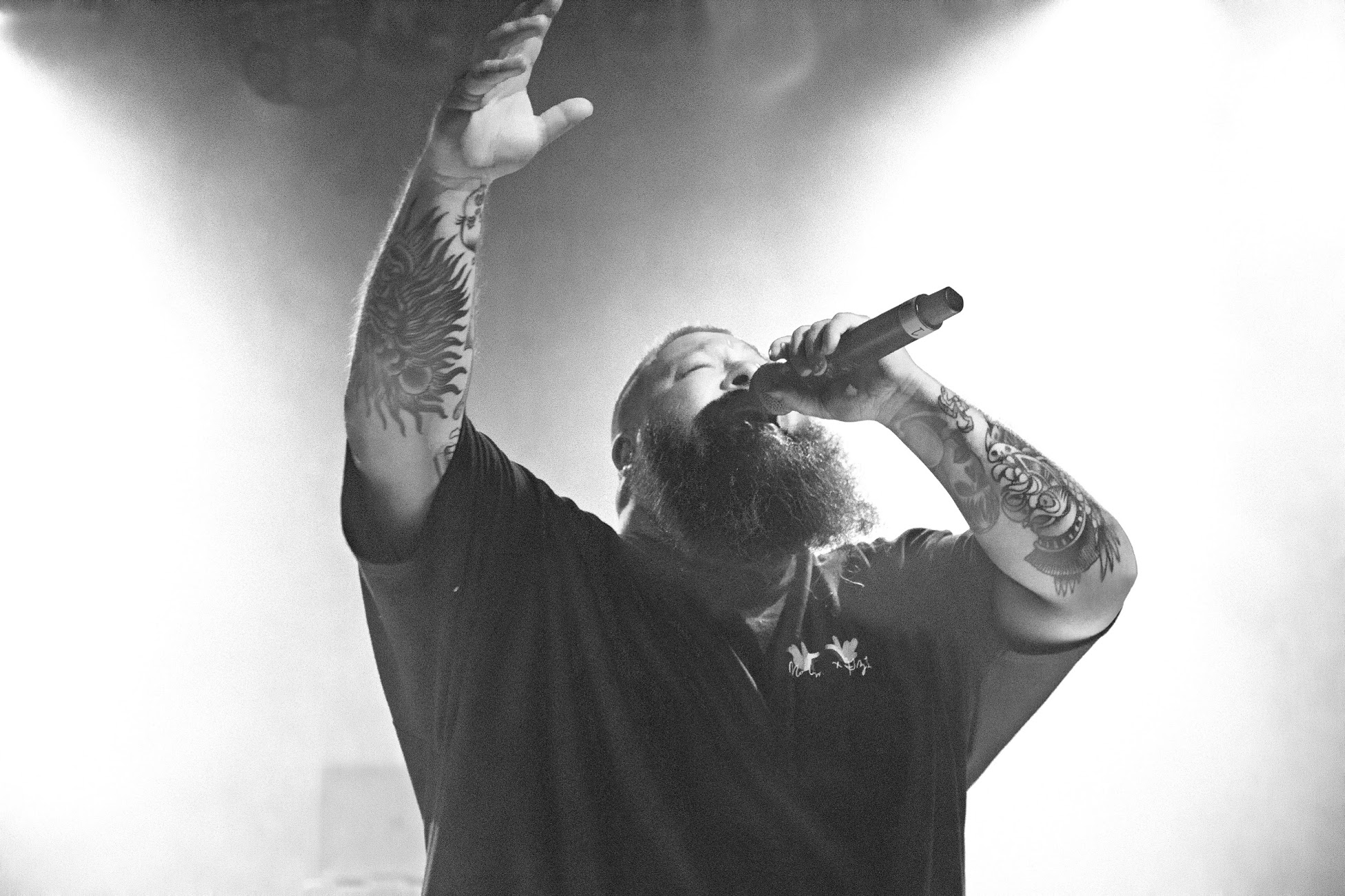 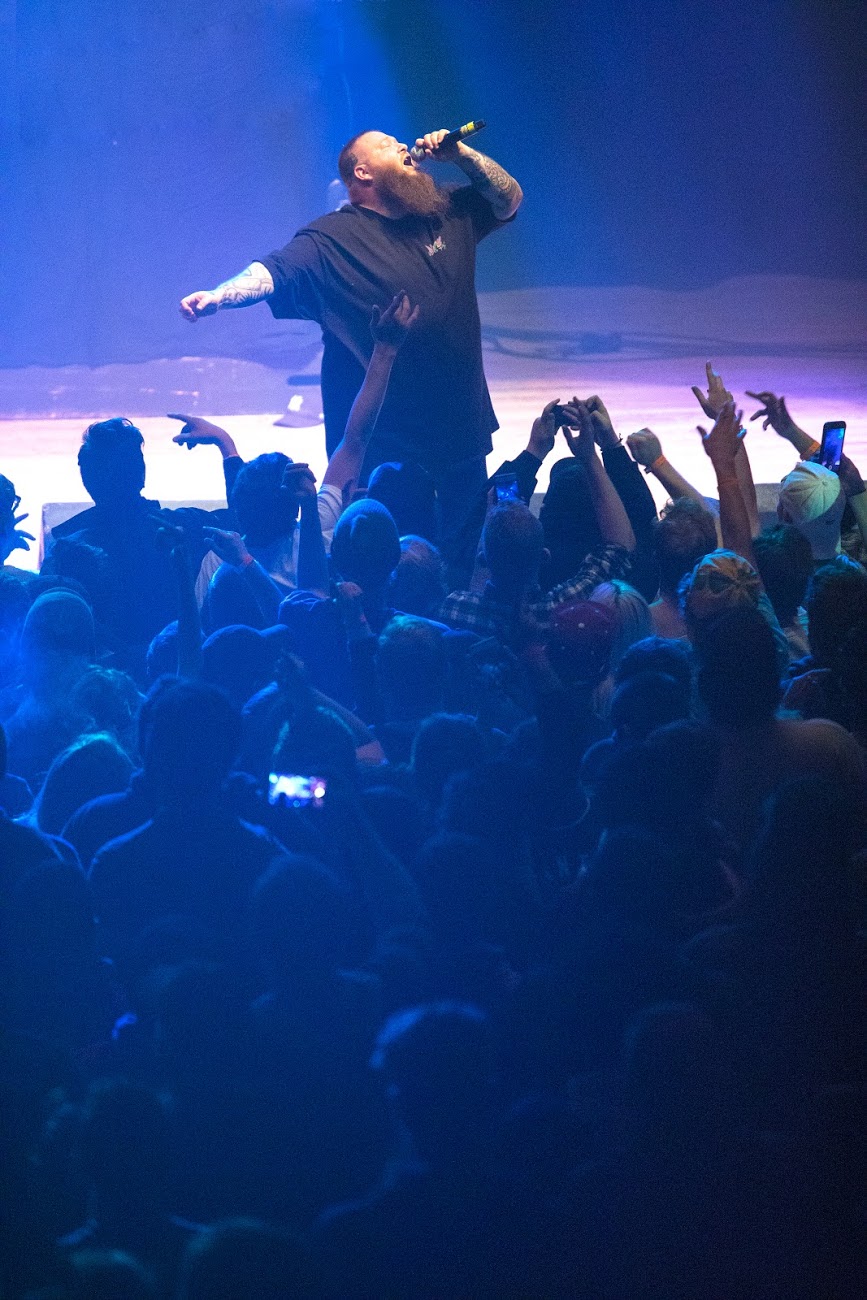